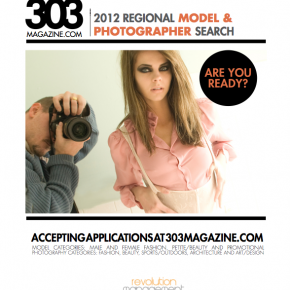 303 Magazine’s 2011 Regional Model and Photographer Search is slowly nearing its end and, as the public learns more regarding the impressive judging panel, applications are only likely to peak into frenzy. Two of said impressive judges are current Denver residents who, throughout their careers, traveled around the globe searching for talent and have together landed girls into motion pictures, television, print ads, high fashion runways and magazine covers. These expert judges, Marc Tuscher and Diane Gormley, are current partners of New-York-based company Revolution Management and, with unrivaled knowledge of the local market, are readying themselves to find Denver’s best hidden talent.

With more than fifteen years of experience in the industry, Marc Tuscher’s knowledge and reputation are immense. His career began as an agent to famous fashion photographers, including Elle magazine creative director, Gilles Bensimon. However, it was after being approached by agencies to make the switch to talent and model management that Marc Tuscher’s career made the books. With American Models, Tuscher managed several up-and-coming stars, including Olympic synchronized swimmer and major motion picture actress Estella Warren. Soon after, Tuscher moved to Pauline’s, the top boutique agency in New York, where he discovered the current no. 1 international supermodel Liya Kebede and managed the modeling career of future Academy Award winner Charlize Theron. Tuscher’s girls have appeared on covers for Vogue, Sports Illustrated and Victoria’s Secret; campaigns for Calvin Klein, Covergirl and Ralph Lauren; and over 200 motion pictures and television broadcasts including Monster, Pearl Harbor, Troy, Sin City, and That 70’s Show. After such astounding success, Tuscher has switched gears to return to Revolution Management as president and, now, serves as an expert eye in 303 Magazine’s search for Colorado’s very own future stars.

Diana Gormley’s rich career began with Colorado roots,circa 1995, as an assistant to Denver icon, Donna Baldwin. Quickly noted for her skills in model management, Gormley was immediately whisked away to New York by world renowned Next Model Management, where she became Director of New Faces and Development. After 8 successful years of discovering promising talent, Gormley moved to powerhouse New York Models and further developed the careers of national superstars. Her 12 years working inside, out of, around and throughout New York is easily highlighted by simply browsing through her impressive dossier: she’s discovered modeling legends Jessica Miller, Magosia, Lisa Cant, Crystal Wrenn, Anja Rubik and Anna J.; as well as actresses Rachel Nicols and Sarah Roemer. Fashion and beauty houses such as Donna Karan, Calvin Klein, L’Oreal and Covergirl; and world-famous publications, such as Sports Illustrated and Vogue Italia; have featured Gormley’s girls through hundreds of campaigns and covers. Her creative imaging and branding has sent her to the chic streets of both Paris and Milan, further cementing her reputation as a recognizable, top agent. After moving back to Denver, She is currently running the modeling division at Donna Baldwin Talent Agency. Her unmatched knowledge of the local market coupled with her extensive experience in model discovery and international booking have solidified her a seat on the judging panel of 303 Magazine and Revolution Management’s search for Colorado’s finest.

Both the winning photographer and models of the search will have an editorial spread featured in an upcoming issue of 303 Magazine–and that just may be their golden ticket. Not only does the judging panel consist of 303 Magazine staff members, but also includes industry agents and professionals who have traveled the globe in the name of fashion, like the above mentioned. To have professional, editorial work seen by these individuals is an invaluable prize in itself that could be the key to quickly shooting you from Colorado newcomer to national or even international booking status. Simply put: if there is talent, somebody’s dying to sign it.

Submissions will be accepted until September 15th, 2011. Winners of the competition will be announced live at 303 Magazine‘s 2012 January Awards Issue Release Party.