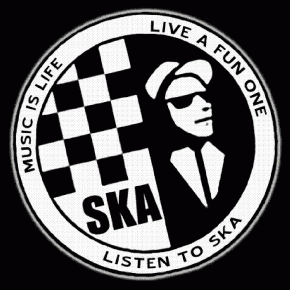 There was a once upon a time when I would fight to stand against the stage for a live show. Me, smack dab in the middle of the mosh – the sweaty, stinky mosh in all its gloriousness – singing along to every word while my eyeliner melted and my hair stuck to my head. But, alas, there comes a time when all good things must come to an end. And Sunday night’s Reel Big Fish/Streetlight Manifesto show at the Ogden marked a definite rite of passage.

Yep, tip your 40 for my lost youth. I actually camped out in the balcony and watched the sweat droplets fly down below.

Lest you judge, let me explain. Fact – there is nowhere more miserable to be on a 100 degree Denver day than inside the Ogden. I challenge Mythbusters to disprove my theory. Once filled with the sweaty, stinky bodies of diehard ska fans moshing their asses off, the place smells not unlike Sasquatch’s armpit. Gross, right? Yep. I’m still down with the punk, but there are days I just don’t want to be in the middle of it all. Or maybe I’m old. Either way, there was more air circulating in the balcony, and more importantly I had a beer I wanted to drink, not bathe in. ‘Nuff said.

Regardless… holy horn section, this was some good times. At a true ska show, there’s no room for pretense and posturing. Come as you are, join in the skank, jump into a circle pit or dance arm-in-arm with complete strangers…or don’t. But dammit, you WILL have a good time. And if you don’t, well, there’s something wrong. Simply put, there is no way to sit idly and just let a Reel Big Fish show happen, even from the balcony.

Running around the stage like spastic hyperactive children, RBF played with the crowd, enticing everyone at times to disco dance, form a conga line, and even do-si-do, all in the stifling Africa-hot interior of the Ogden. Powering through crowd favorites such as “Sell Out” to less-known tracks like “Cannibal,” RBF engaged the crowd with their distinct brand of supermoxie swagger, proving again why they are still a hot ticket.  So what if this isn’t Tchaikovsky …it’s not supposed to be, fool. It’s tight, loud, raucous, solid and fun….exactly how ska should be enjoyed. I also respect anyone who can rock the sideburns like singer/founding band member Aaron Barrett. If Hugh Jackman doesn’t want to do any more stints as Wolverine, I’ve found his replacement. Snickety snick.

All this RBF love is not to say co-headliner Streetlight Manifesto wasn’t good – quite the opposite, actually. Their killer horn section was on fire, and Tomas Kalonky, although he hung out somewhat awkwardly by himself on one side of the stage, slayed the vocals as he always does. One thing I truly appreciate and adore about SM are their smart, thought-provoking lyrics. So while RBF got huge cheers for “Beer,” Streetlight sang about heavier struggles in the amazing “Here’s To Life” (which, incidentally, ranks among my top 20 songs ever. Stoked to finally experience it live, although I have to admit the one on my list is the more instrumental, almost orchestral BOTAR version.) Solid set, awesome energy, and the crowd? Well, they loved it and wanted more. Of course.

The Maxies are clearly cooler than you.

As for the openers, I missed the first band – Rodeo Ruby Love – but caught the majority of The Maxies’ set. If there’s one thing that chaps my hide, it’s bands who are crass simply to be crass. Case in point: decked out in matching red and white outfits and wearing various masks, The Maxies were punk as fuck and were going to prove it to you, whether you cared or not. Seriously, if you didn’t believe them, they would tell you again. And again. Impressed yet? Because they’re punk, you mofos, don’t you forget it. They may want to spend less time on gimmicky costumes and instead actually brush up on some musical skills. I’ll start with Helpful Tip No. 1: fast and loud doesn’t always equal good. Hopefully someone will also get the lead singer a thesaurus … I’m all about dropping f-bombs for effect, but 17 in a one-minute dialogue? That somewhat  borders on brain damaged. The final nail in the Maxiecoffin was when the singer mooned the audience and broke the mic. Apparently they took lessons from YouTube on how to be punk. Or maybe it’s all an act. Who cares.

Final note: a big shout out to new RBF sax player Matt Appleton, who defected from Goldfinger to become Scott Klopfenstein’s replacement. Those not familiar with RBF’s line-up changes over the years might have assumed he was an original member, based on his stellar (read: not unlike a Tazmanian Devil) onstage presence and convincing handling of Monique Powell‘s vocals on “She Has A Girlfriend Now.” Seriously, dude hit some scarily high notes. He’s clearly found a good home.