With so many breweries and distilleries along the Front Range and across Colorado, it can be difficult for owners, brewers and distillers to separate themselves from the norm. That is unless you are Dry Land Distillers. From Mezcal-inspired spirits, gin and a whiskey made out of 100% Colorado wheat, the founders at Dry Land Distillery are not only separating themselves from the pack; they are furthering a conversation about what it means to have a truly local product — giving a tip of the hat and writing love letters to the high plains with every spirit they produce. 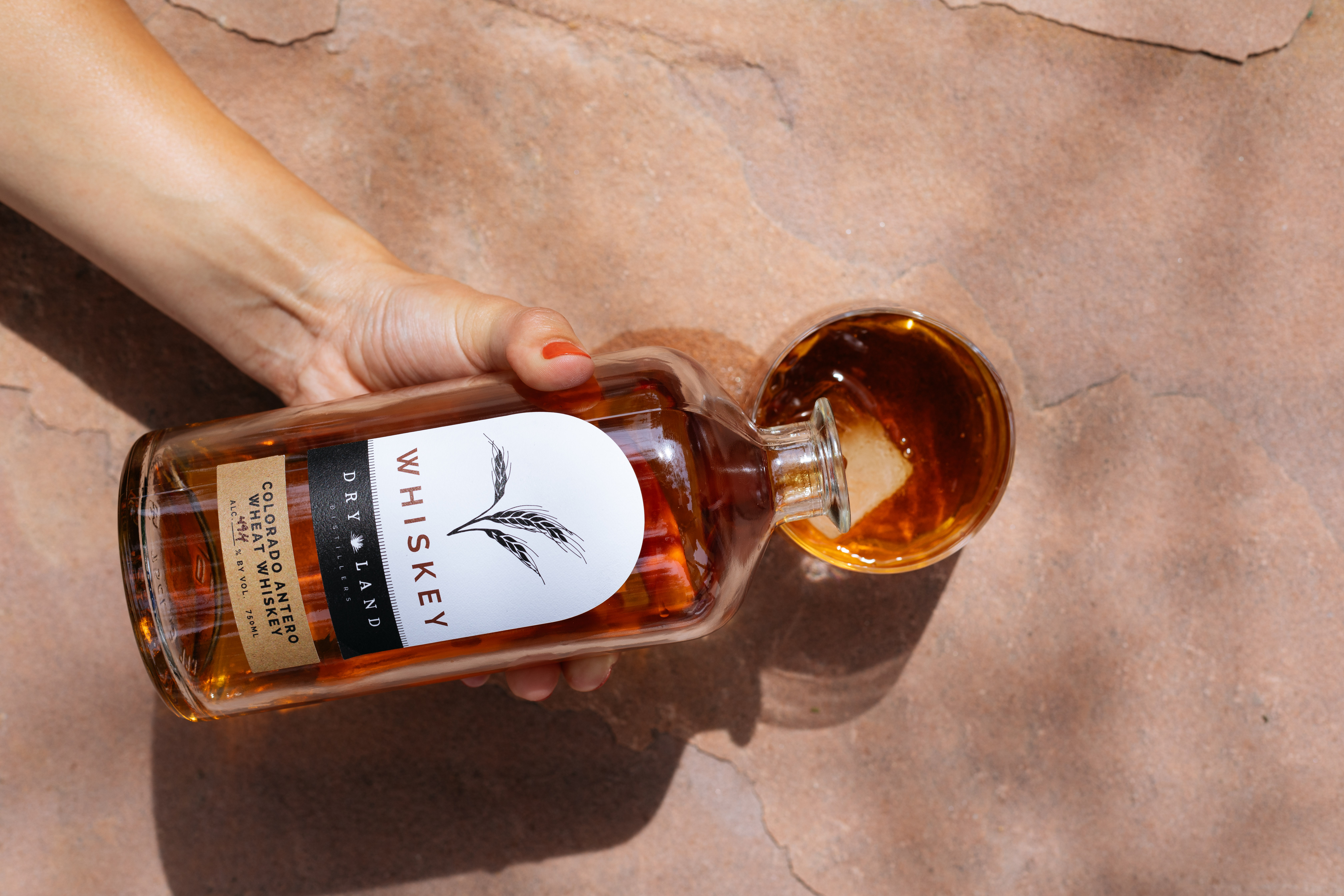 Cutting corners is not an option when the goal is to produce remarkable and unique spirits. That seems to be the motto for the creators at Dry Land Distillery. From the outset — which started in 2017 with doors officially opening to the public in 2018 — the creators​​ Nels Wroe, Aaron Main and Marc Staats were determined to create a spirit that not only reflected the spirit of the West but, as they put it, “authentically showcase” the ingredients that are district and native to Colorado.

With help from researchers at Colorado State University and Troubador Maltings, Wroe and his team distilled the first-of-its-kind whiskey from Antero Wheat. This 100% wheat whiskey was developed and is grown by Colorado State University and is now — through the Colorado Grain Chain — grown by local farmers like Arnusch Farms who are located in Colorado’s Prospect Valley. While “authentic” can be a bit of a sliding scale, Dry Land stays true to its definition by utilizing staff-of-life heirloom wheat verities, local cactus, and regional botanicals. Each one receives its own pedestal through premium spirits and cocktails — sometimes, it feels like the individuals over at Dry Land resemble alchemists rather than distillers. 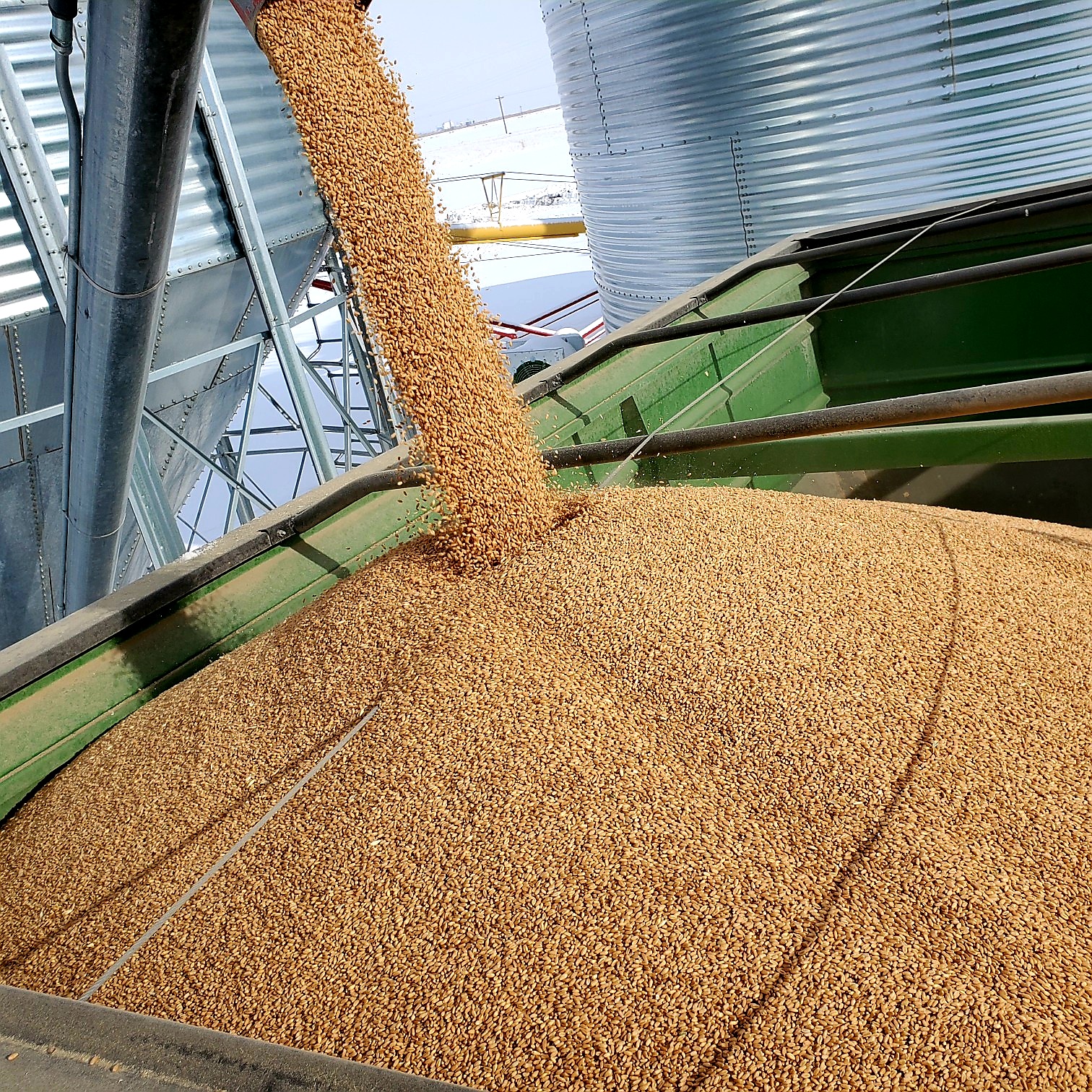 This dedication to cultivating a truly local product would not have been possible without the assistance of organizations such as the Colorado Grain Chain, which has been a driving factor in their mission to reintroduce ancient and heritage grains specific to Colorado. When we asked Wroe how the partnership with the Colorado Grain Chain came about, Wroe mentioned, “The Colorado Grain Chain was a serendipitous discovery two years into our history. We didn’t know of the organization until after we started the distillery; had we known of them in advance, it would have saved us a lot of effort and time. Once we discovered the CGC, it was a natural fit — and the amount of knowledge and connections in the CGC has been invaluable.” After discussing the Colorado Grain Chain and its impact on Dry Land, it became apparent that the physical location of Dry Land plays a prominent role in its mission to showcase Colorado ingredients, artisans and farmers authentically.

For example, their Pot and Column Stills, which look like they should belong in a museum, are handmade by a local artisan welder, Zac Arias — one of the most sought-after artisanal welders and craftsmen in the United States. Even if whiskey is not your thing, taking the time to visit Dry Land and admire the intricate detail in the work of these machines is worth the drive. 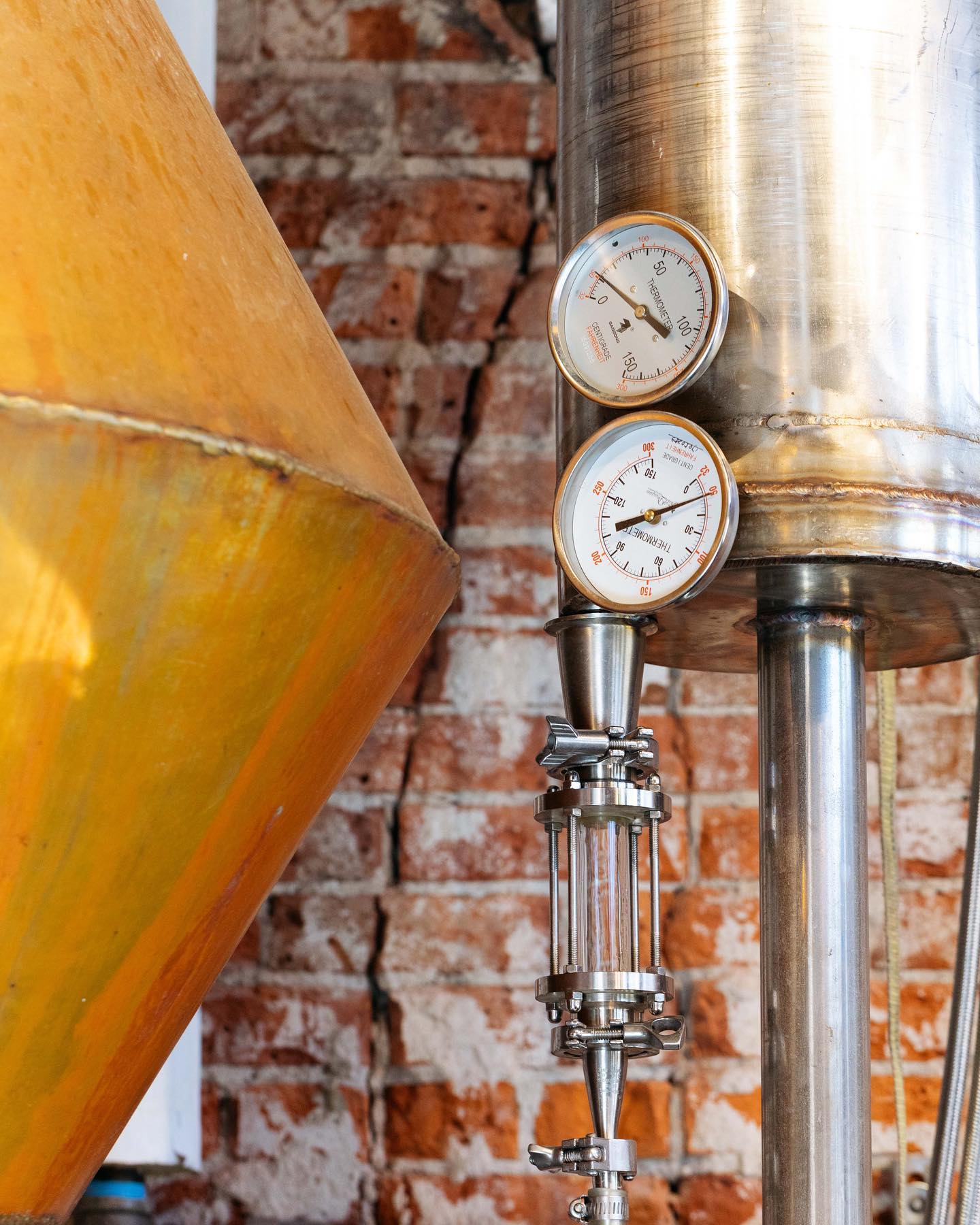 Longmont is a food town. It always has been and hopefully, always will be. This being the case, it only made sense for Nels and his team to set up their distillery, which also doubles as a tasting room — which just celebrated its fourth anniversary — right in the heart of Colorado’s most underrated farm-to-table food scene. When we asked Wroe why Longmont was so important for the brand, Wroe mentioned, “Our location in downtown Longmont is partly a homage to the agricultural roots of Longmont. Longmont’s history is food — likely hundreds of small and large farms, a flour mill, the sugar mill, and many artisan food manufacturers have their roots here.” This ‘homage’ to Longmont’s agricultural roots even shows in the design of their tasting room and distillery. “The building we’re in was the Valley Farm Dairy for over 40 years. We even saved wall sections from the huge milk coolers that have decades of milk bottle and case counts written in pencil from floor to ceiling.” 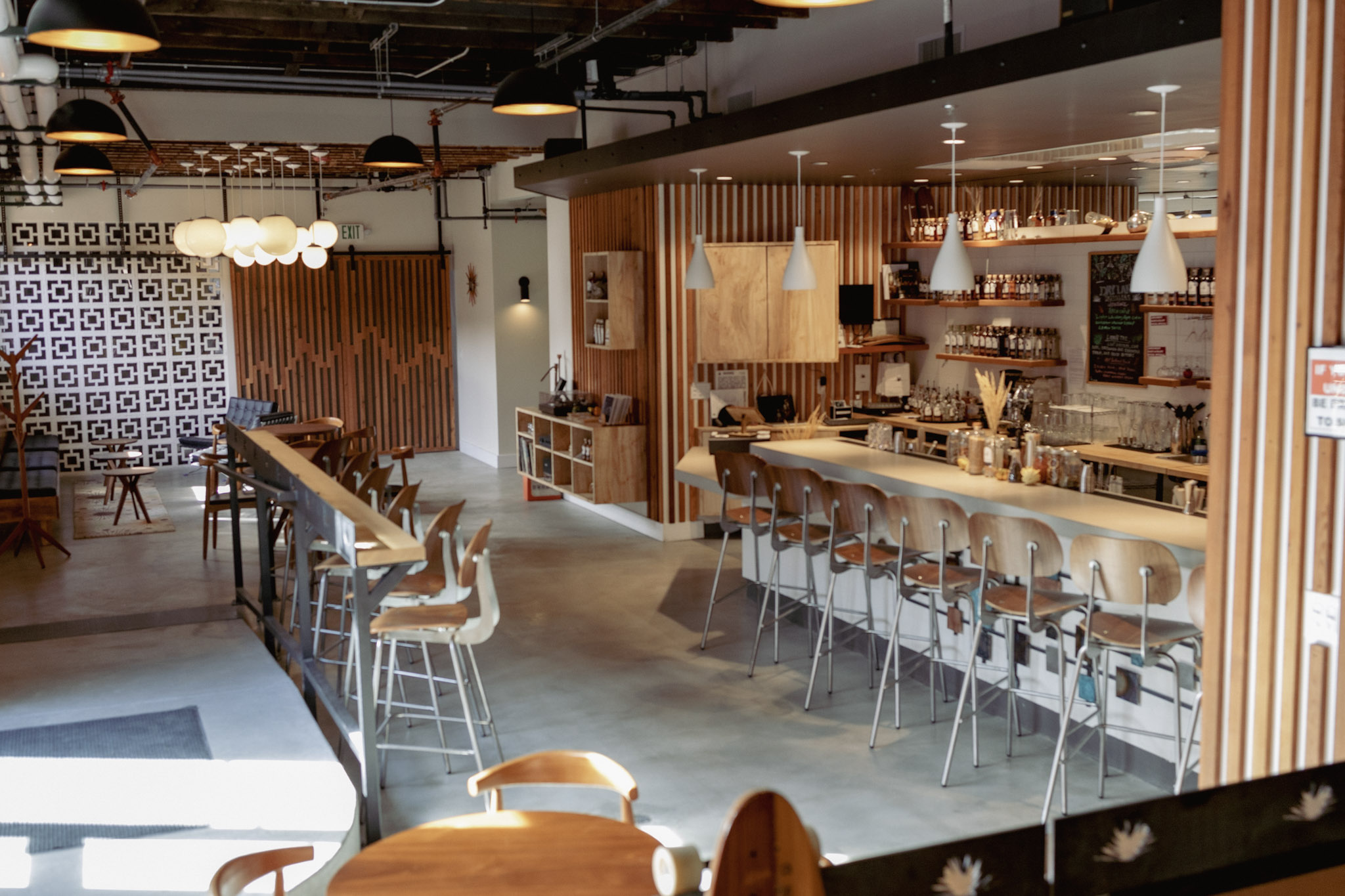 Before we wrapped up our conversation, we had to discuss the Cactus Spirit, another first-of-its-kind spirit that Wroe credits to his dog’s unfortunate experience with a cactus. Wroe tells us his original intention was “to create a mescal from high-altitude varieties of agave that grow in the southern parts of Colorado, but we could never find a consistent source for the raw agave. We could forage for it, but foraging on a large scale is extremely damaging to our lands — so that was ruled out immediately. When we couldn’t source agave, we almost canceled our plans for a mescal spirit until Mei, our family’s border collie, led us to an alternative.” Once Wroe — and, unfortunately, the pup — realized how prevalent cactus was in Colorado, they realized they had a great idea on their hands. “A bit of research and help from a good friend who grew up in Sonora led us to a theory that cactus could be used in a similar way that agave is traditionally used. We spent some painful days harvesting local cactus to develop a recipe — and it worked! Cactus might be the most authentically Colorado spirit on the market today,” says Wroe. 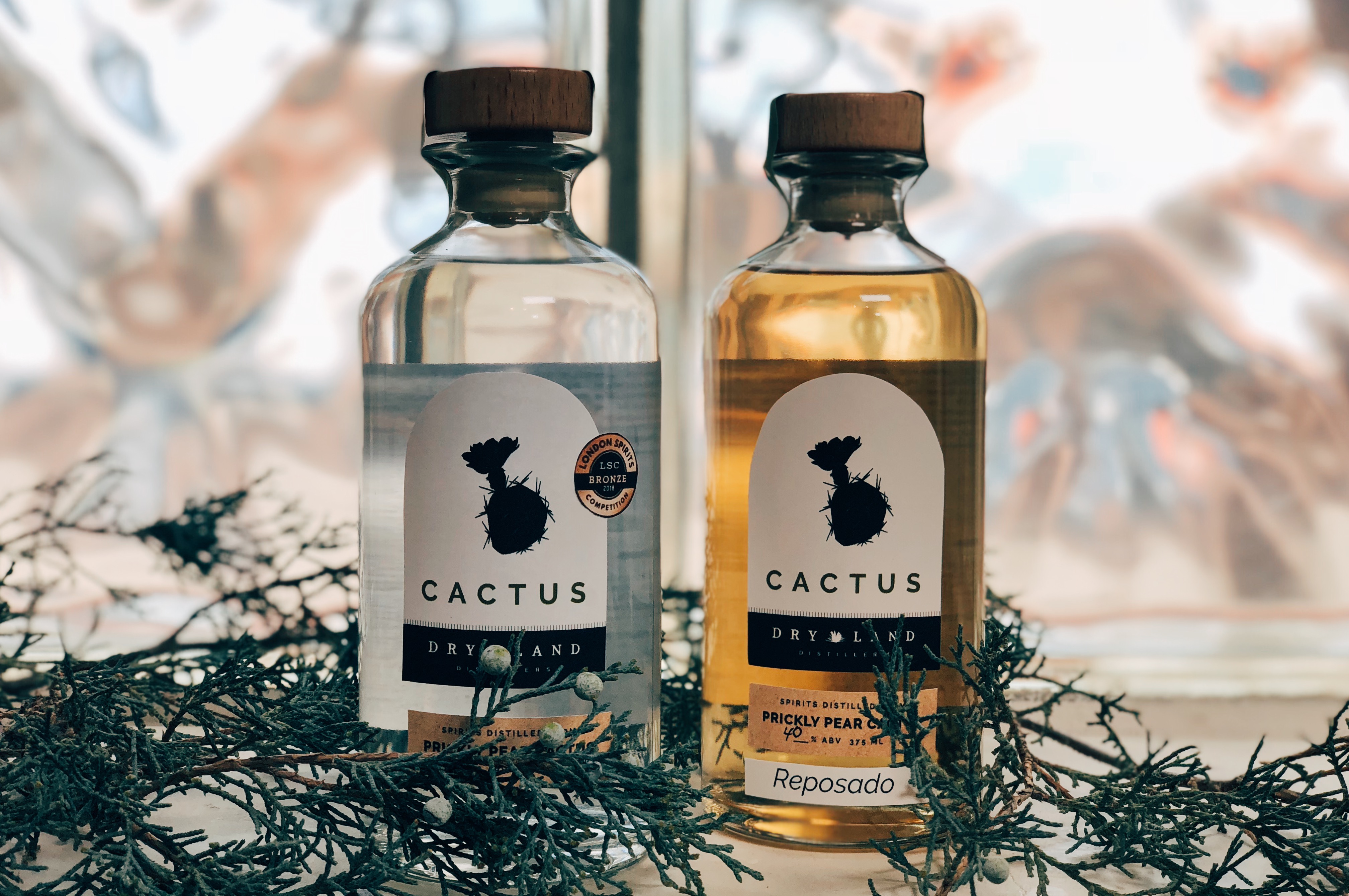 What Dry Land Distillery is doing goes far beyond crafting high-end spirits. They passionately work with farmers, malters, artisans and all those in between to make a spirit authentic to Colorado, a task many have tried and failed to achieve. While it may be faster to cut corners, do the bare minimum and slap a “Colorado Proud” sticker on the bottle — a common occurrence in the alcohol business — it is harder to actively achieve what it means to purchase locally grown, raised and processed food and agricultural products, which benefit Colorado’s economy, local farmers and ranchers. Dry Land Distillery is a perfect example of how a consumer can achieve all of the above. It is hard not to get excited for the future of Dry Land and its prospective ideas and collaborations with neighboring bakers and cider brewers. The infectious attitude and appreciation toward local ingredients and the local food economy is palpable no matter whom we talk to at Dry Land. As a consumer, it makes one consider, “why doesn’t this exist everywhere?”