There’s no live show quite like a tour’s first stop. Thousands of eager fans shuffle in their seats, waiting semi-patiently for an artist near and dear to their lives, without any real primer of the act to come. Sometimes — and particularly in the case of the Red Hot Chili Peppers —  the wait is far longer than usual, especially for Denver, a city that’s waited a few years for the westward rockers to grace its presence.

Mile High Stadium was buzzing. It was a sold-out show Saturday night, and as the stadium gradually filled with show-goers, one couldn’t help but notice the vast array of self-expression on display — from up in the nosebleeds under colossal floodlights, down to the foldable floor seats stretching from endzone to endzone. A ‘Beavis and Butthead’ shirt, tie-dye button-ups with a piano in the shape of an Ouroboros snake, tribal pattern sundresses; a shirt with a sloth doing the ‘Wolverine’ pose; and Metallica shirts complimenting greasy, straight hair. A John Elway jersey from the mid-’80s (obviously), as well as a Derek Carr jersey from last year (ballsy). Handlebar mustaches and pink bandanas. Trucker hats on top, knee-high cowboy boots on the bottom. Say what you want about the Red Hot Chili Peppers — they transcend musical preference. If you love live music — the energy and dopamine that comes with it — then you love what they’ve been doing 38 years on. 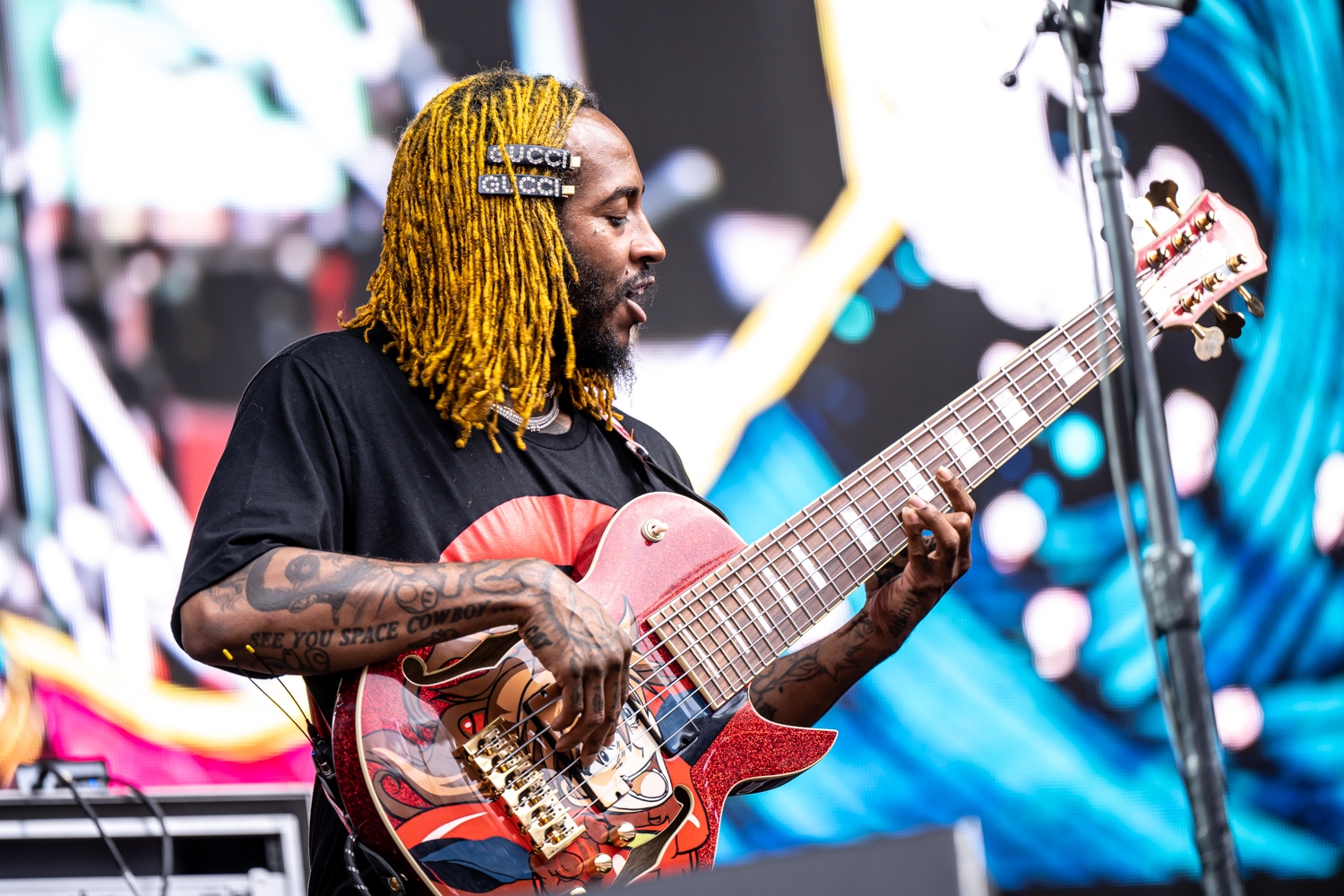 The two-openers weren’t of the usual opener caliber, considering Thundercat packed the house at Red Rocks not too far back and HAIM sold out Madison Square Garden earlier this year. If the former were any cooler, he’d be frozen. Thundercat wields his six-string bass — hilariously featuring a graphic of an anime character — with complete control, like a samurai’s sword. With limited stage time at his disposal, he rattled off his biggest hits in succession, most notably “Dragonball Durag” and “Them Changes” — two mid-to-down tempo records that gave enough space to improvise head-spinning fills by Thundercat.

No one on this planet is cooler than Thundercat, except maybe Danielle Haim — or for that matter, all three of the Haim sisters. The familial trio has carved out a unicorn lane in modern rock music. As their set started, Danielle strutted onto the stage, playing repeated, humming chords. A white background on the video board featured “HAIM” in a blocky red text. The group’s electricity onstage was a sight to behold — “My Song 5” was a front-and-back jam, and on more than one occasion throughout the show, the trio shed their stringed instruments and opted for sticks, beating into various-sized drums with a synchronicity that could only be so perfect had they done this a million times before. Estee Haim wore a stank face while plucking at goosebump-inducing bass chords — that face that musicians wear playing the grimiest of funk tunes. HAIM is a must-see. Their stage presence was that of force and unlimited soundscape — so many layers and pockets of unconventional instrumentalism. 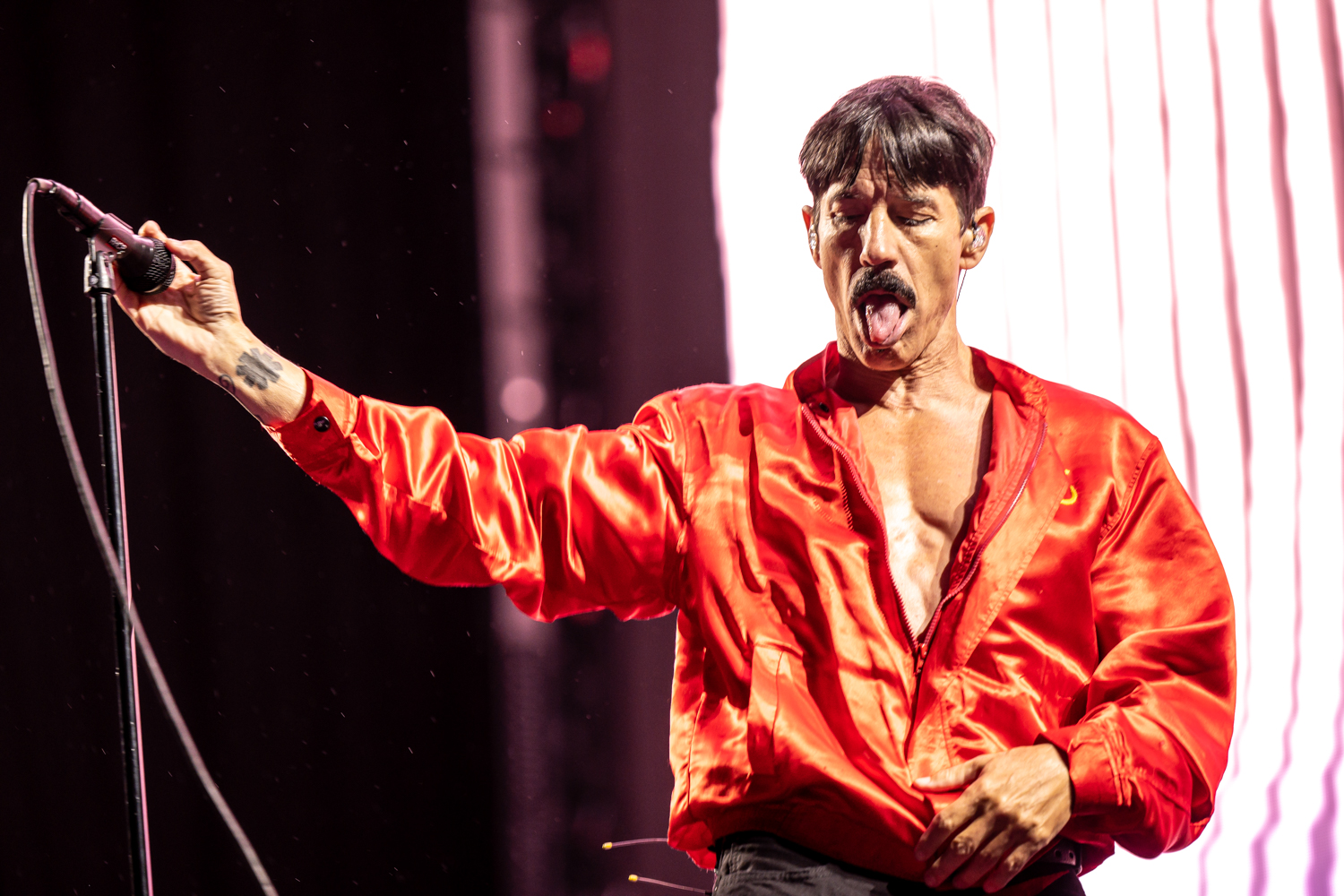 Then, as if a higher power knew any more intensity would set Mile High Stadium on fire, the downpour began. Audience members with half a mind for checking a weather app whipped out rain jackets. Stagehands frantically pushed puddles of water over the stage’s edge, again and again, until word got out that the show was on a 15-minute-delay; peanuts to a sold-out crowd of 49 thousand. When the lights finally shut off and the clock struck nine, a roar heard in Cheyenne shook the stadium. Flea — the world’s most infamous bassist — bunny hopped out with John Frusciante, a welcoming sight for diehard fans of the group, who’ve missed Frusciante’s “punk and funk” style of playing as an early member. Flea donned a see-through purple tank top (with yellow and purple dyed hair), and Frusciante was dressed like a skater kid on the first day of school. Chad Smith, the band’s backbone, walked out wearing his trademark backward hat, as well as a black denim vest with a bedazzled tiger on the back.

The trio started with a full-speed jam session that led into their opening song. And a perfect opener it was — the high-powered “Can’t Stop,” as Frusciante began chugging out the unforgettable riff. By this point, the damp, packed-in gallery was going ape shit — an all-too-fitting queue for frontman Anthony Kiedis to skip onto stage in a cherry-red bomber jacket. The video screen behind them was both a floor, ceiling and back wall, like a giant digital mouth. Kiedis and company flipped over to “Dani California,” keeping the hits rolling, as lava-like effects flowed across the screen and at their feet. Smith had no problem tearing through drum fills whenever possible, as it only exponentiated Frusciante and Flea’s chops. 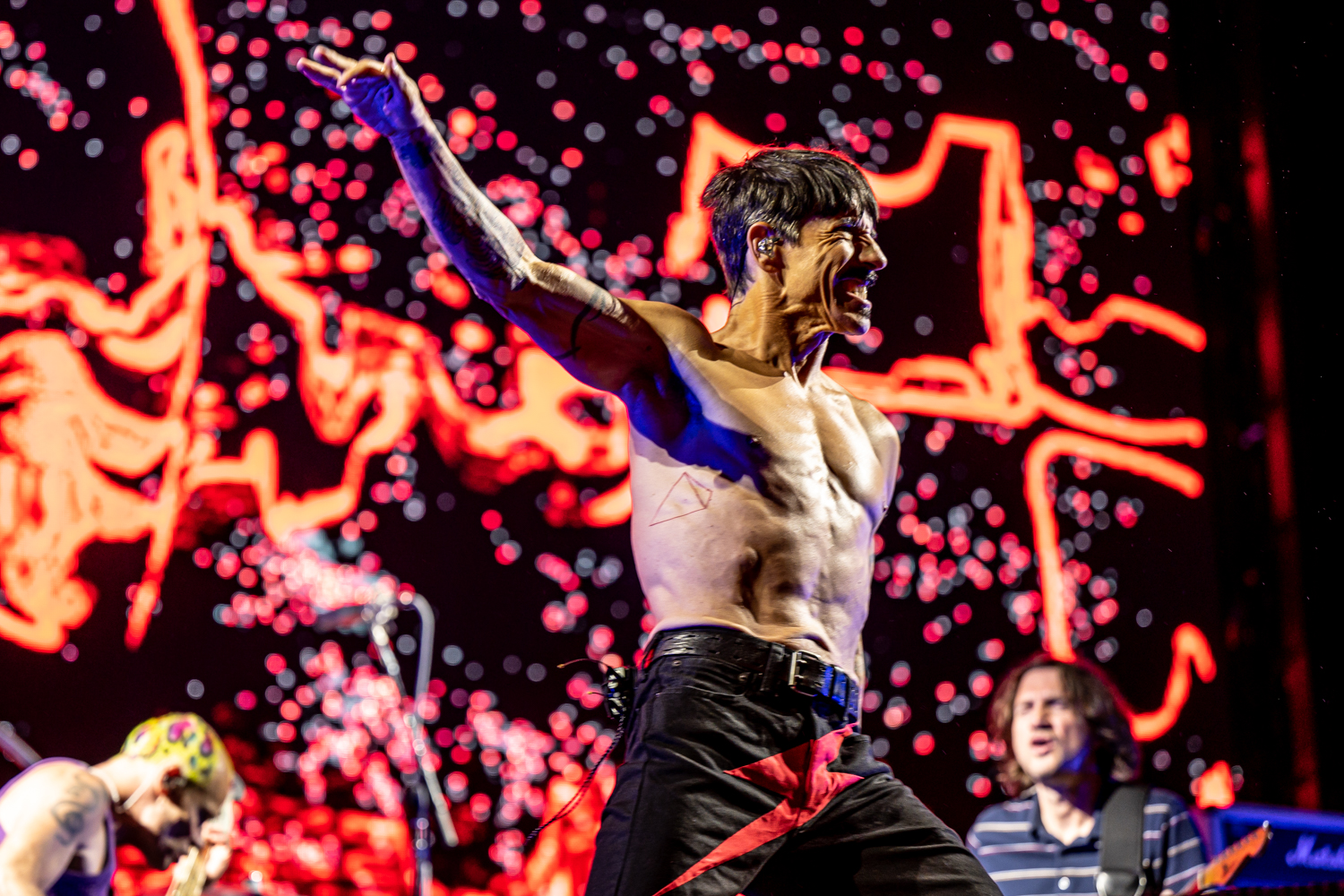 “Scar Tissue” was a change of pace at just the right time, and soon after, “Snow (Hey Oh)” created a wonderful pairing. Seeing as this was the band’s introductory show on a world tour, there were no setlists to study beforehand, so when they revved things back up with a deep cut, “Nobody Weird Like Me.” The punk vibe was welcomed with open arms. RHCP certainly knows how to conjure a ballad, but it could be reasonably argued that they’re at their best when it’s turned up a notch.

Like all shows by the band, Flea laid down a meaty bass riff about halfway through the two-hour set. Plucking, slapping, strumming and head-bobbing away (and lots of it). The video screen was a fourth member of the show, turning the stage into a cosmic vat of colorful fluids. 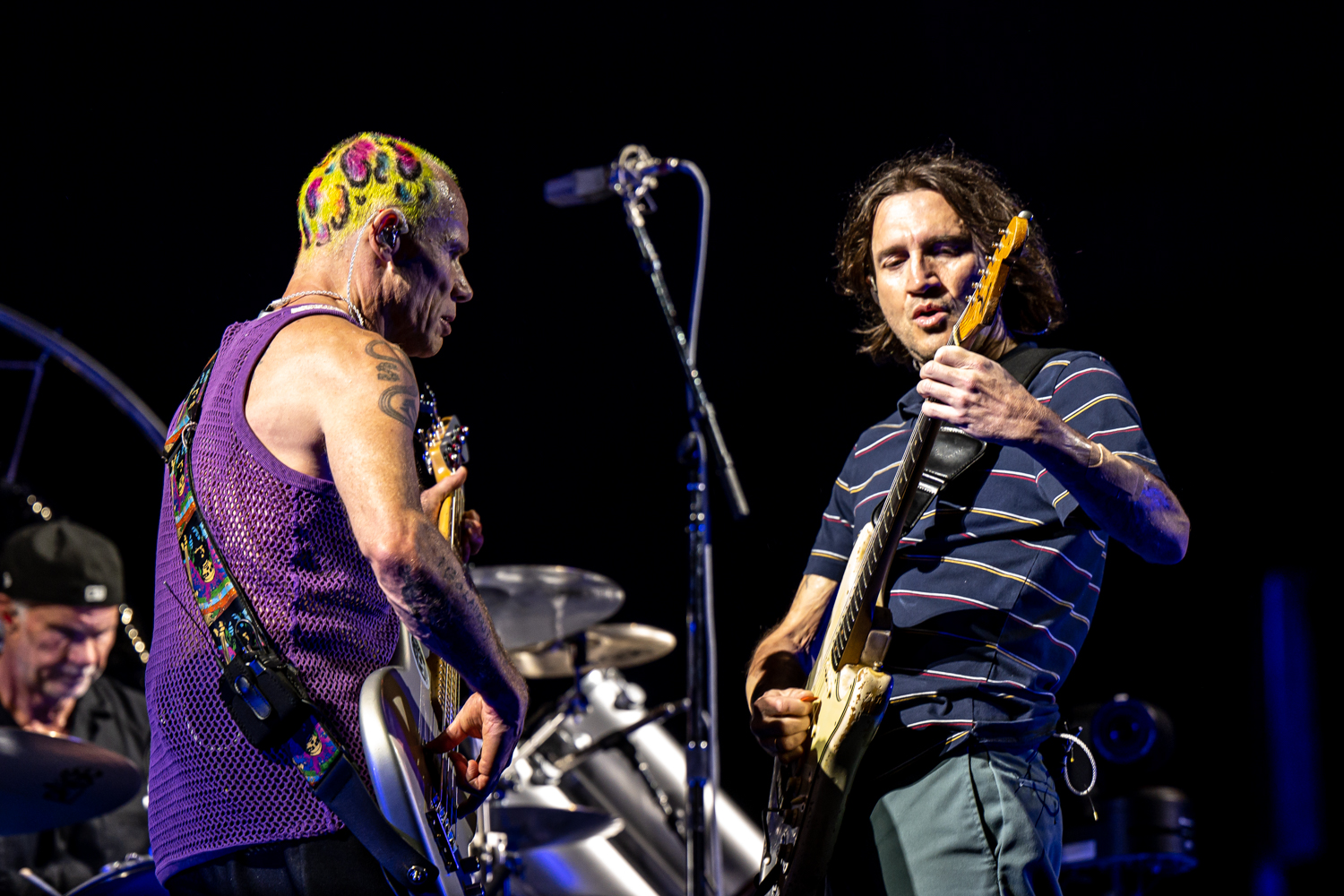 “Californication” induced a cheer that could pierce ears, as the group transitioned it into a jamming rendition of Funkadelic’s “What Is Soul.” The band announced their second studio album of the year, coming in mid-October, and closed things out with two encore songs, most notably “Under the Bridge,” their most resonating “slow song” by far.

Through thick and thin, rain and shine, delays upon delays, breakups and reformations, the Red Hot Chili Peppers have stood the test of time as a cornerstone of rock ‘n’ roll. 38 years since their self-titled debut album, they leave no excuses about age or fatigue. And it will remain that way, as long as their devoted fan base keeps listening, which — if Saturday night’s show was any indication — isn’t stopping anytime soon.