HAIM is not just a girl rock band. The three sisters that make up the group (Este, Danielle and Alana Haim) are certified rock stars at this junction in their careers. They’ve got the chops, the songs and the bravado to take on and outdo many of their male fronted-contemporaries. Expelling any narrative that would position them as “good, for a girl,” the sisters are damn good in general. Stopping by Red Rocks Amphitheatre on their “Sister Sister Sister Tour,” the group made an even larger statement. Accompanied by Lizzo and Maggie Rogers opening the performance, HAIM put womanhood on a pedestal making for one of 2018’s most relevant and important tours, demonstrating that girls rock, period. 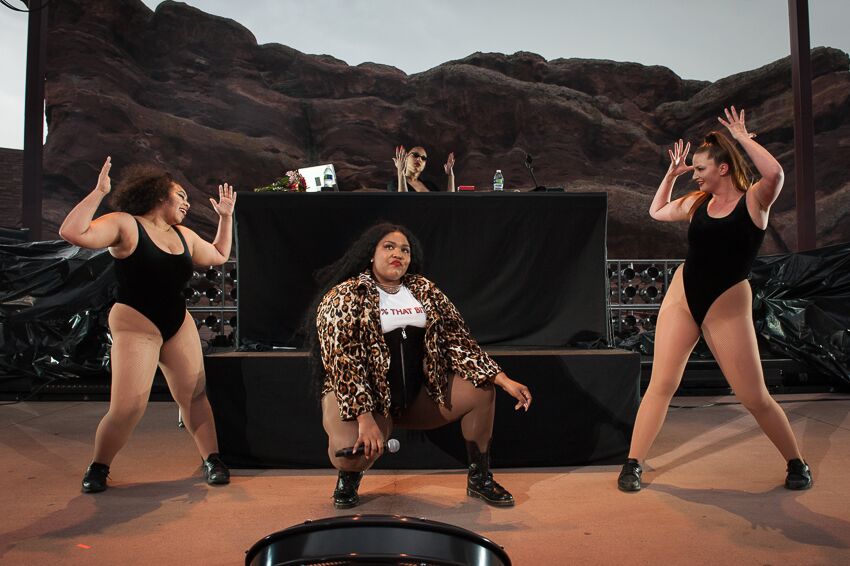 Lizzo, opening the performance, barreled through her set preaching a message of body positivity while taking the audience to the church of the most righteous “thiccness.” Adorned by two backup dancers donning “Single Ladies” styled leotards and her DJ, Lizzo was a powerhouse of an opener — one, that many claimed to have solely bought tickets for. She was sassy and boisterous, making sure the audience knew she was “100% that bitch.” Between twerking on the amphitheaters risers and belting out anthems like “Good as Hell” and “Water Me,” Lizzo received the most welcoming and genuine response to an opener I had ever witnessed. At many points, it felt as though Lizzo were headlining Red Rocks herself, a notion many in the audience picked up on and didn’t mind one bit — except for perhaps Maggie Rogers, who was forced to immediately follow such a performance up. 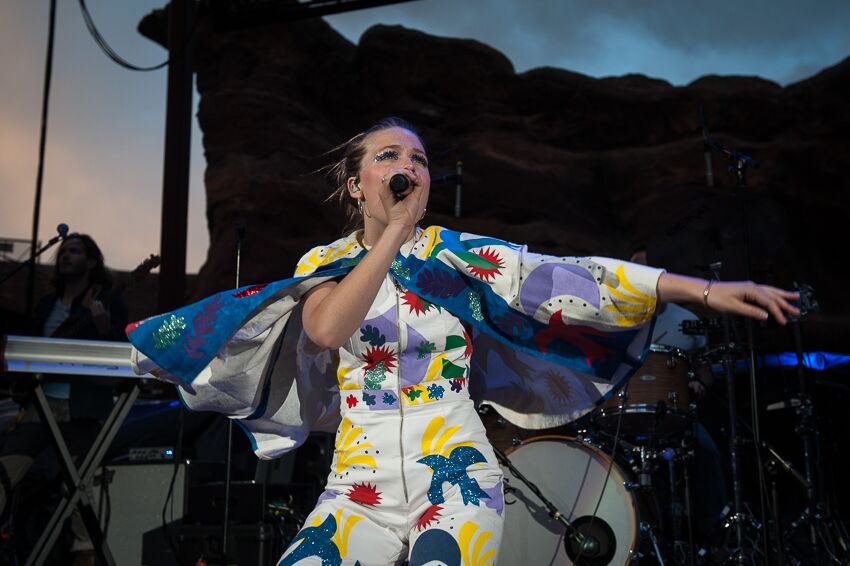 It was hard not to feel a tinge of guilt for the singer. Lizzo absolutely murdered the stage, and Maggie Rogers was tasked with cleaning up the aftermath. By no means a bad performance, however, the electro-folk songs made for a jarring transition from the empowering gospel laden trap anthems that proceeded it.  Rogers sang beautifully but the electric atmosphere Lizzo cultivated lingered untouched — an elephant in the amphitheater. Performing many songs off her new album, Rogers made up for lost ground — particularly with the more upbeat numbers toward the latter end of her set. The inclusion of a sneaky Macy Gray cover (“I Try”), sufficiently reengaged the crowd just in time for one of the most beautiful numbers of the night, “Back in My Body.” Without prompt, the amphitheater lit up in a wave of handheld lights, as the singer struggled to sing the song — overcome in the surreal emotion of the moment. It was a moment she’s worked toward her entire life, and at that moment her efforts had come full circle. Saying it was, “the most beautiful thing,” she’d ever seen, there wasn’t an arm without goosebumps. 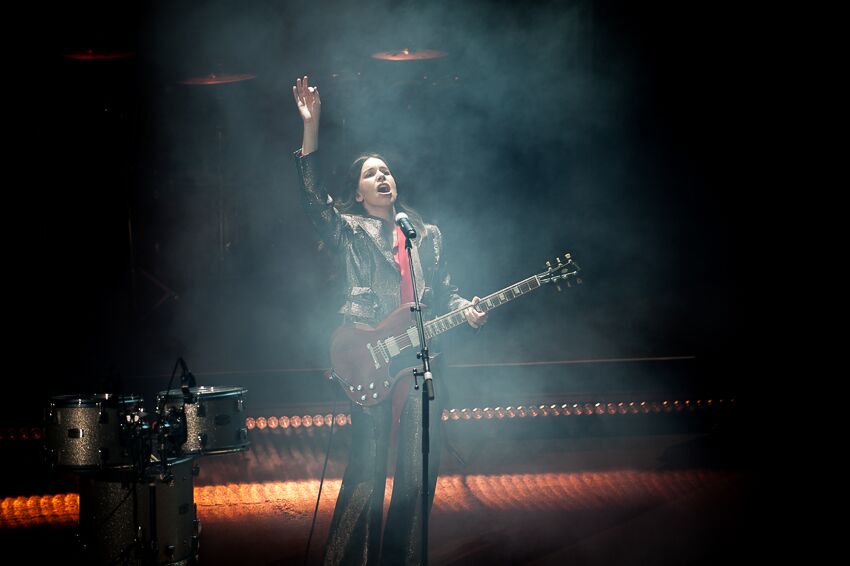 When HAIM eventually took the stage, the energy in the amphitheater had reached its equilibrium again, and the crowd was ready to rock. Bursting out in a flash of white light and banging on a multitude of drums, the women of HAIM were ready to get down to business. Promptly launching into “Falling,” the amphitheater was an amplified chorus of voices singing along to the popular cut. The ladies were sharp and focused, playing a filler-free set that got everyone off their feet. Hilarious sister banter and quips amongst the siblings dotted the set as miniature interludes, giving insight into their songwriting and dynamic as sisters. Between the three, they were all over the place, each one hitting vocal duties, exchanging instruments and even hitting choreographed dance moves. Throughout, the band took the rockstar narrative and played it of their own accord. 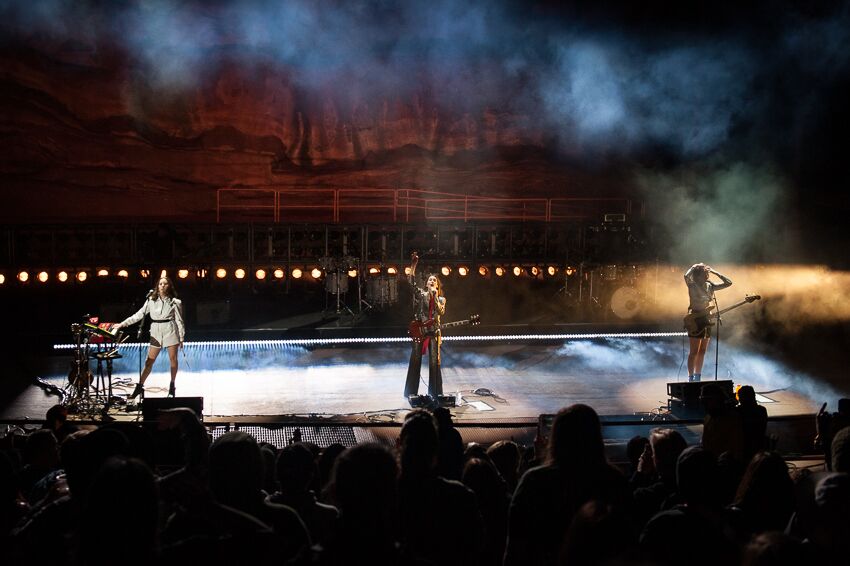 Reintroducing Lizzo and Maggie Rogers to the stage, all the “sisters” took the stage for a truly wondrous cover of “The Boy Is Mine.” The song featuring Este and Lizzo singing and fighting over Maggie Rogers was a massive hit amongst the crowd, and really demonstrated the respect and adoration the ladies had fostered throughout their tour. Red Rocks being the final stop on the tour, HAIM brought everything and more to the table covering the expanse of Something To Tell You and Days are Gone. However, no moment was more fantastic than when the ladies made their way to the center of the amphitheater, on a platform just above the sound booth, to perform a stripped-down version of “Night So Long” amidst the crowd. All of a sudden, the larger than life band had come close to home, and capped off the night in beautiful fashion.

Red Rocks being such a large venue, you lose sight of the delicate intimacy of smaller venues the band’s used to play. Despite the big production of the show and the many rock and roll moments that proceeded, the most badass was bringing it back to the audience and giving their fans something they’d never forget.