Charismatic Trio, The BRKN, Are Ready To Be Your Next Favorite Band

Three lawn chairs set up to face each other in the backyard, lead singer of The BRKN, Jacob Cade, invited his friends and bandmates to “come outside.” With slight hesitation, they obliged and set into a conversation that spanned hours and topics. Retelling the story, drummer Mike Bokenkamp couldn’t help but laugh at the “cultish” setup and his first reaction to say no to Cade. “I was tired,” he said laughing. “There’s bugs out there,” guitarist MJ Younkers piped in. Telling the story of how their debut EP, Come Outside, got its name, members of The BRKN poked fun at each other while also acknowledging the impact of a moment.

“We sat there and told stories and things we were excited about, our hopes for writing the songs,” Bokenkamp said. “And Jacob walked through a little bit of what he had been dealing with. It was this nice little moment that we overlooked…but looking back on it we were kind of like, that set the entire tone for the time that we spent there. When we realized that, we were like, ‘what do we want to call this EP?’ it was kind of obvious. It all started with ‘come outside.’” 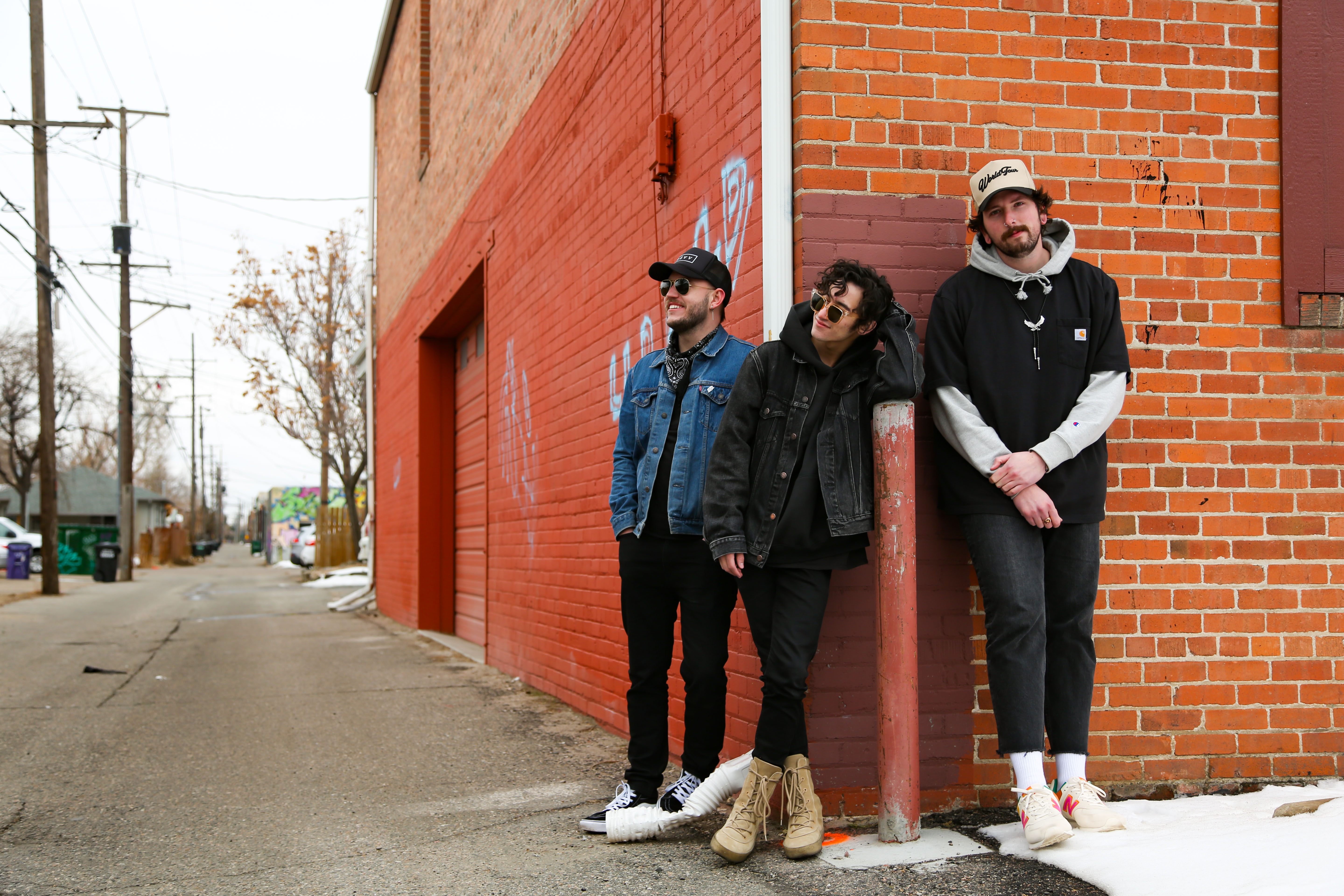 Displayed in their anecdote, and the hilarious quips inserted when telling it, The BRKN is a band dedicated to building community and having fun with the music they make. Having their start right before the pandemic hit, the band has come a long way from where they were a few years back and has had to endure a lot to get here.

“We’d all been doing music for a really long time and I had written a bunch of demos for these songs and [had] this idea of putting together a band called The BRKN. It was an idea that had been in my mind I just hadn’t met the right guys yet,” Cade explained. While working on his solo project, he was introduced to Bokenkamp through a church that he’d been performing at. With a tour coming up, Cade asked Bokenkamp to play drums for him, solidifying their future together as bandmates. “On that tour, it was apparent that it was going to become something more than just one tour,” Cade said. 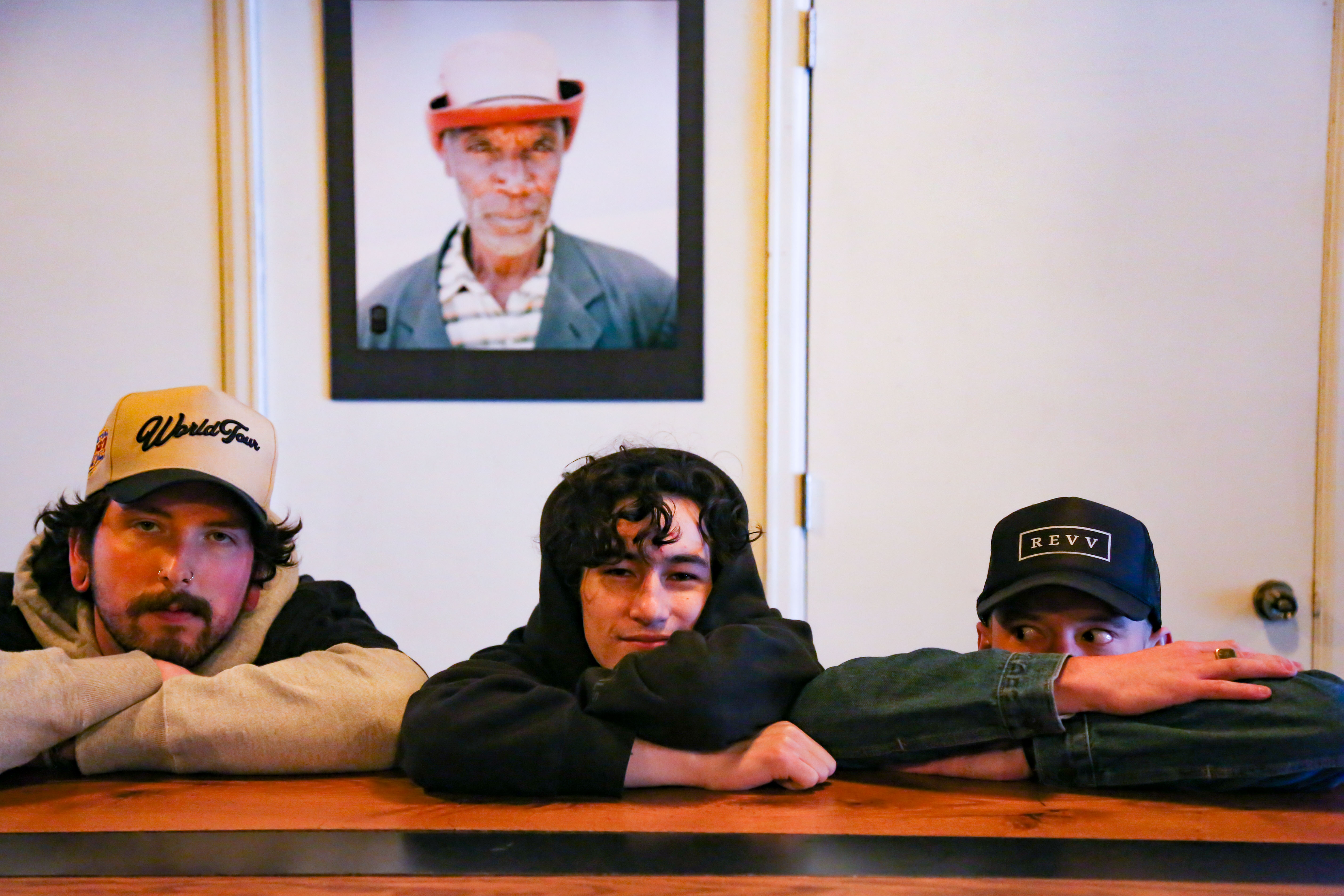 Performing Cade’s demos on the short yet successful tour opened both Cade and Bokenkamp’s eyes to a shared desire to catalyze Cade’s vision for The BRKN. “We really wanted to write music together and figure out what our sound is as a band so we were going to do that after this tour. The gist of it is we did this tour, then we needed to find another person that was going to complete the band thing,” Cade said. Things seemed to fall into place with perfect timing, as the duo was joined by MJ Younkers on guitar in March of 2020. From the jump, the bandmates felt a natural chemistry that they recognized doesn’t come often.

“I’ve never been as proud of songs that come out of sessions than I am with Mike and MJ. It just feels like there’s some sort of thing there. It’s a feeling… it just feels right when we’re hearing it back through the monitors, it just feels natural,” Cade said. Having a fully functioning band, the group was ready to introduce themselves to the music scene with their first tour. Unfortunately, the inevitable put a hold on the band’s plans. 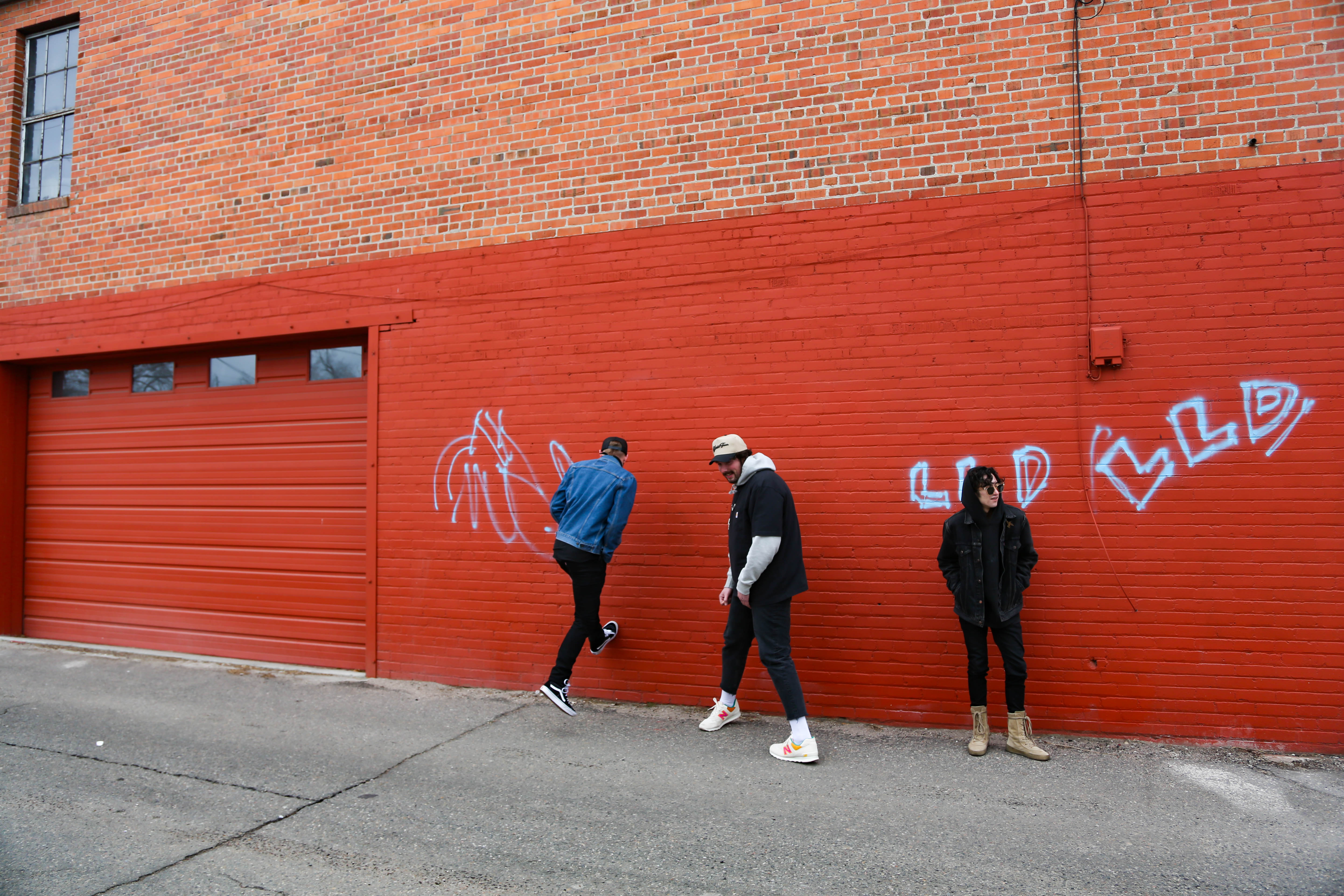 “When that tour was canceled [due to the pandemic] we were like, ‘what are we going to do?’ And so we started writing and that turned into tracking demos in Jacob’s room and that turned into, [us saying,] I think we should just go make it happen while we all have nothing else to do. It sounds crazy now because I remember how crushed we all were, but I honestly don’t know where our band would be if that tour didn’t get canceled,” Bokenkamp said.

Forced to take a step back and think, in the early stages of the pandemic, the band decided to fly to Nashville where they spent a month and a half writing and recording music. Allocating all of their time and energy to searching for their sound, The BRKN experienced a transformation that set them up to become the band they are today.

“Before COVID and after COVID, there are two distinct stages of lyrical content and mood, and the thematic elements, instruments and layout of songs are different than anything that was before. It’s thoughtful, it’s a lot more mature, it’s musically thought out in a different way than those other [songs] were and you can tell that through every step of that process that it was intentionally planned,” Younkers said. 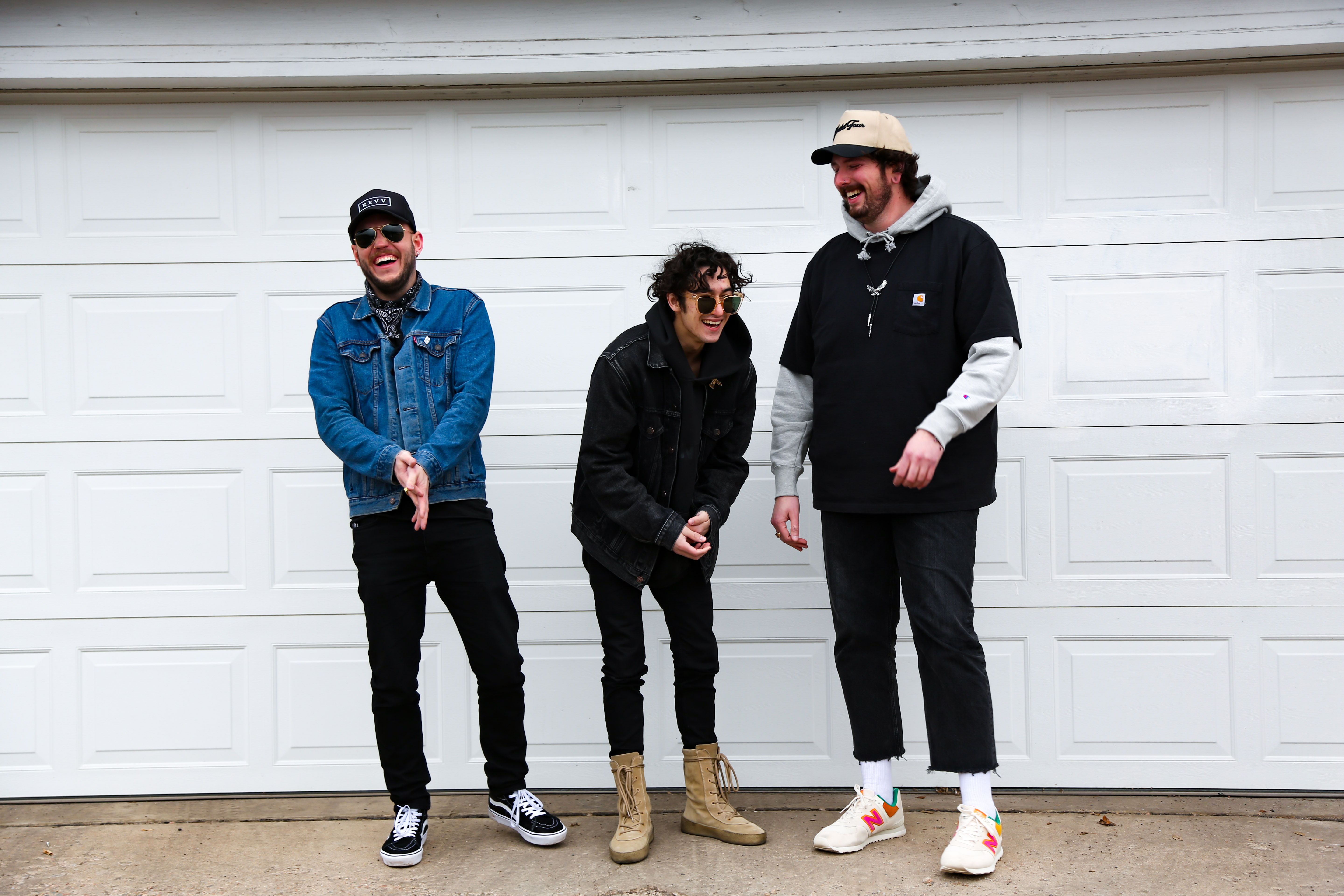 From the pop punk demos inspired by bands such as Neck Deep and Mayday Parade, The BRKN has adopted a sound drawing from pop elements while also providing robust and sonorous rhythm and guitar sections to capture a live music sound. The dynamic between bandmates allows for this balance in sound. Describing their songwriting process, it was clear that the bandmates have a unique ability to understand what the others are looking for and fill in any gaps where the other two have weaknesses. Bokenkamp explained that while Cade is more of a dreamer, always seeking out new ideas, he is there to be more grounded and think logistically about how to execute those ideas. “And then MJ is able to really keep the peace there and be like, ‘Okay guys, his idea is sick I do want to see it but I see Mike’s point it’s going to be tough, what if we land somewhere here [in the middle?]’” Bokenkamp said.

“We all know where it’s going to end up but it’s not somewhere any one of us by ourselves could get it to and I think that’s what’s really cool, is that the music that we do end up making is unique because all three of us are putting influence from our unique backgrounds and our varied music tastes into that and then that creates this really cool final product that we can look at and go, ‘That’s ours, we made that,’” Younkers added.

Since the release of their first EP Come Outside this past summer, the band has released their single “Coffee” along with a music video. Beginning on March 8 at The Marquis Theater, the band is kicking off their tour with The Dangerous Summer and will also be touring Europe in the fall. Looking forward, the band expressed their excitement for what’s to come and the impact that they aspire to have.

“We had all kinds of things planned that are finally now just starting to be able to happen again, and I think we’re all ready to embrace that and have a hopeful attitude for sure,” Younkers said. “We’re just so excited to get out at shows. That’s what we all feel like we’ve been put on this Earth to do is play music, connect with people and express things that people can relate to through music so if that’s all we get to do in life, then great.”