A show slated for February 4 at the Fox Theatre featuring headliners the Drunken Hearts and supporting acts Buffalo Commons and Pick & Howl as turned into a benefit concert for those affected by the Marshall Fire. The fire, which on December 30 ripped through southeast Boulder County and destroyed or damaged over 1,000 structures in its path, brought immense tragedy to our local communities. After realizing the scope of the tragedy in the days following the fire, Drunken Hearts founder and frontman Andrew McConathy thought was, “We should start thinking about turning this into a benefit show.” He put his head together with local promoter David Weingarden and a number of local musicians to turn the headlining show at the Fox into a benefit show at the Boulder Theater for the same date.

“I started calling around to people that would draw more than what would be comfortable at the Fox,” McConathy said. “We had a great response from the artists that wanted to help.” For him and his fellow musicians, it was a “no-brainer.” Originally presented by 105.5 The Colorado Sound, two more sponsors hopped on board when the show was re-announced as a benefit concert. Avery Brewing Company and Jack Daniels are the second and third sponsors, with the latter having already donated $5,000 to the cause. For McConathy, watching the community rally together and support the event has been tremendously encouraging. 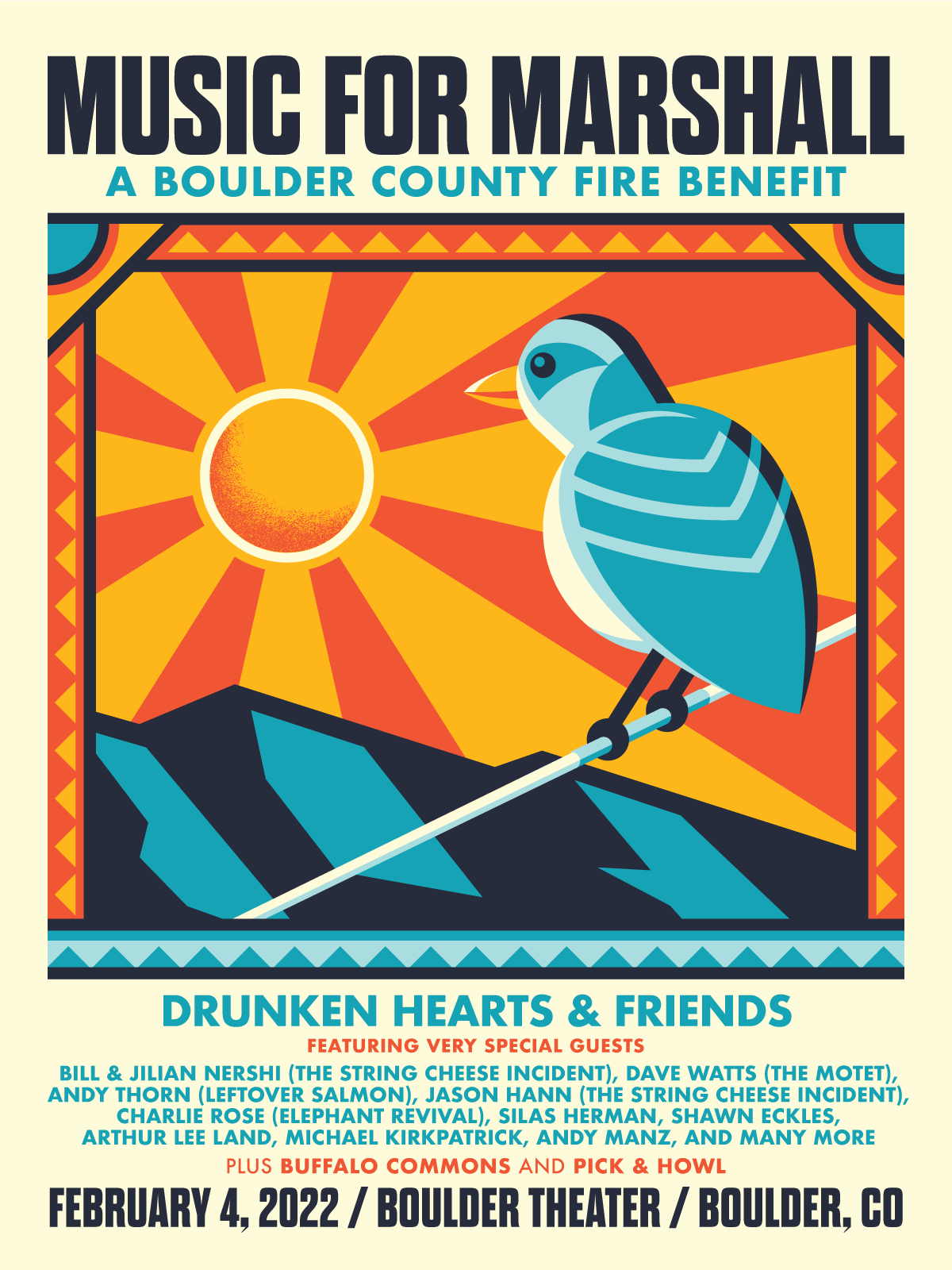 With a view from his own home overlooking U.S. 36, McConathy watched as homes burned, including the homes of The Motet drummer Dave Watts and Boulder Lifestyle Magazine founder and musician Andy Manz, both of whom will be playing as special guests at the benefit show. Despite having lost everything, “both of those musicians are donating their time to help other people affected by the fire,” McConathy said, emphasizing the importance of community to all of the artists joining forces on February 4. Along with Watts and Manz, other special guests will include Bill Nershi and Jason Hann of the String Cheese Incident, Jillian Nershi, Leftover Salmon’s Andy Thorn, Elephant Revival’s Charlie Rose, mandolinist Silas Herman, guitarist Shawn Eckles and multi-instrumentalist Michael Kirkpatrick, with Annabel Lukins Stelling as the evening’s emcee.

Bill Nershi, one of the weightier names on the docket, is excited to be involved in creating something positive. “It’s great that people are focusing right now on what we can do in the musical community to help people out,” he said. “It’s important for the community to rally together to lend a helping hand wherever they can, and for musicians, the opportunity is really great for getting people together and being able to raise some money.” Both Nershi and his wife Jillian are psyched to do something that they feel is important to the community. “We’re trying to salvage everyone’s emotions and make some positive change for some folks,” McConathy said, sharing Nershi’s sentiments. “To have everyone come together to celebrate a little bit, or at least try to smile and enjoy each other’s company, and do what we can do to try and make things better.”

Aside from playing and fundraising with an incredibly talented and impressive cast of local musicians, the Drunken Hearts will also be debuting their latest EP, Wildflower Sessions, which is set to be released the day of the benefit show.

The proceeds from ticket sales will go to Community Foundation Boulder County. In choosing the organization to receive the funds, McConathy said that Community Foundation is the nonprofit that “we all deemed as using their resources in the best, proper way and directly helping the people that lost everything.” Local hunger relief organization Conscious Alliance will also be collecting donations on-site and running a silent auction for the event. McConathy went on to explain about the second benefactor: “Conscious Alliance has continued to provide food for frontline workers and people affected by the fire.” For those who can’t attend the event, there will also be a free live stream and an opportunity for viewers to donate.