Today at 5 a.m., more than 8,000 King Soopers union workers went on strike across nearly 80 stores in the Denver Metro Area. The strike comes after months of unsuccessful negotiations between United Food and Commercial Workers (UFCW) Local 7 and Kroger-owned King Soopers. Union worker contracts expired at 11:59 p.m. on January 8. Union workers and King Soopers were unable to reach a new contract agreement before the deadline.

A week prior, frustrated with lack of progress during negotiations, unionized stores throughout Colorado held a vote to strike against alleged unfair labor practices. Union workers voted overwhelmingly in favor.

With both parties unable to reach an agreement before the set strike date, union workers across the Denver Metro Area are on strike, fighting for union contract proposals regarding workplace safety and fair labor practices.

A Rundown of Negotiations & Circumstances 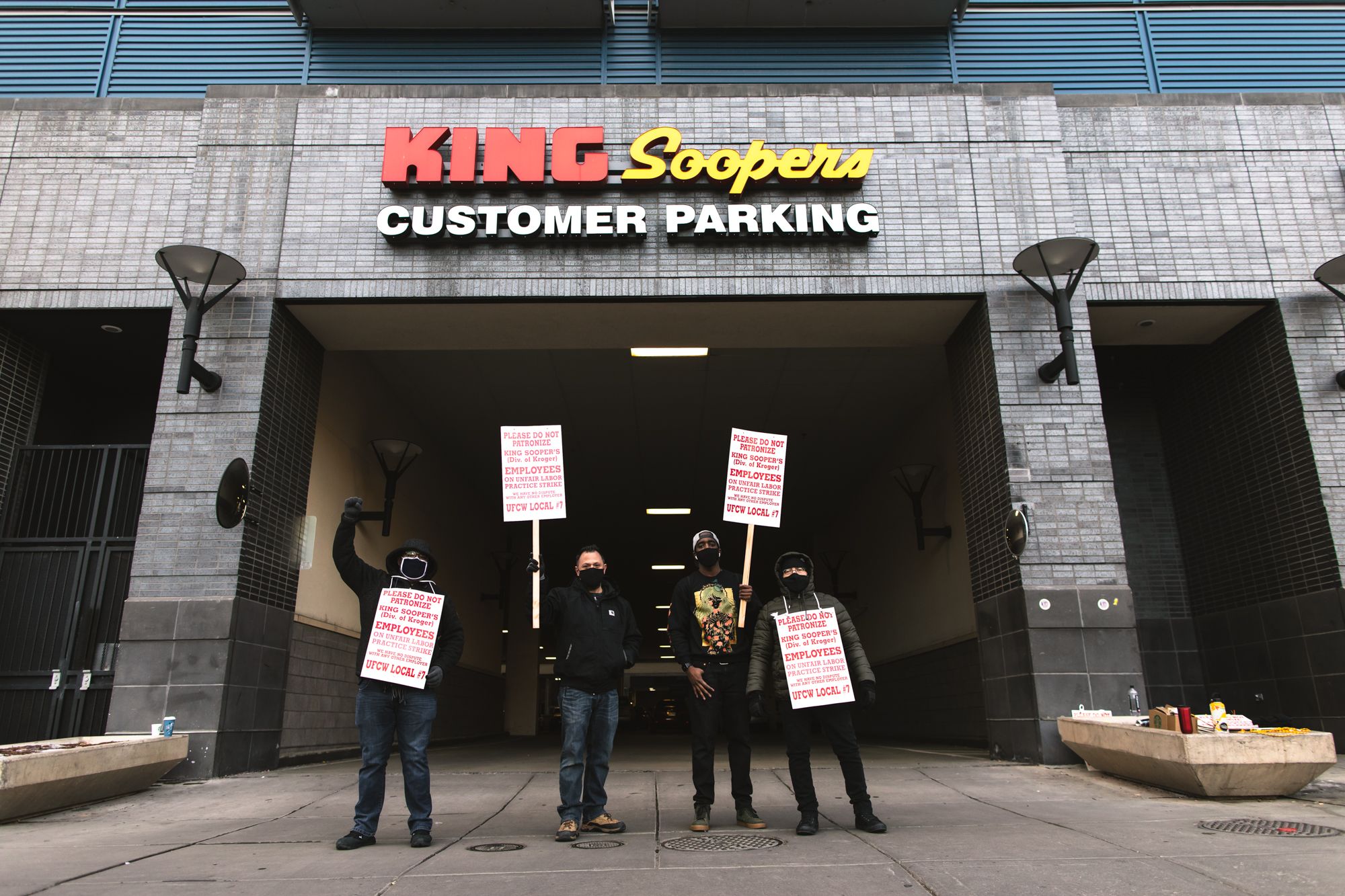 According to Kim Cordova, UFCW Local 7 President, King Soopers failed to properly address any of the union’s priorities during negotiations. UFCW Local 7 alleges a combination of unfair labor practices and an “unwillingness to bargain in good faith” on King Soopers’ behalf, said Cordova in a recent press statement.

On January 4, union workers voted to strike. A week later, King Soopers asked UFCW Local 7 to return to the table, offering a federal mediator. The union refused to come back to the table without detailed information regarding health care and employee safety. Today is the first day of the union workers’ strike.

King Soopers employees in Denver currently start in part-time roles at minimum wage, or $15.87 an hour. Most workers, including experienced ones, are assigned part-time hours, and say that contributes to a workforce living in poverty. Since the onset of COVID-19, King Soopers workers say they face dangerous work environments with a lack of consistent PPE, low mask-wearing enforcement and limited sick time or time off to serve as a caretaker. Additionally, the union alleges that many workers report experiencing belligerence from customers, including verbal and physical harassment during the pandemic. 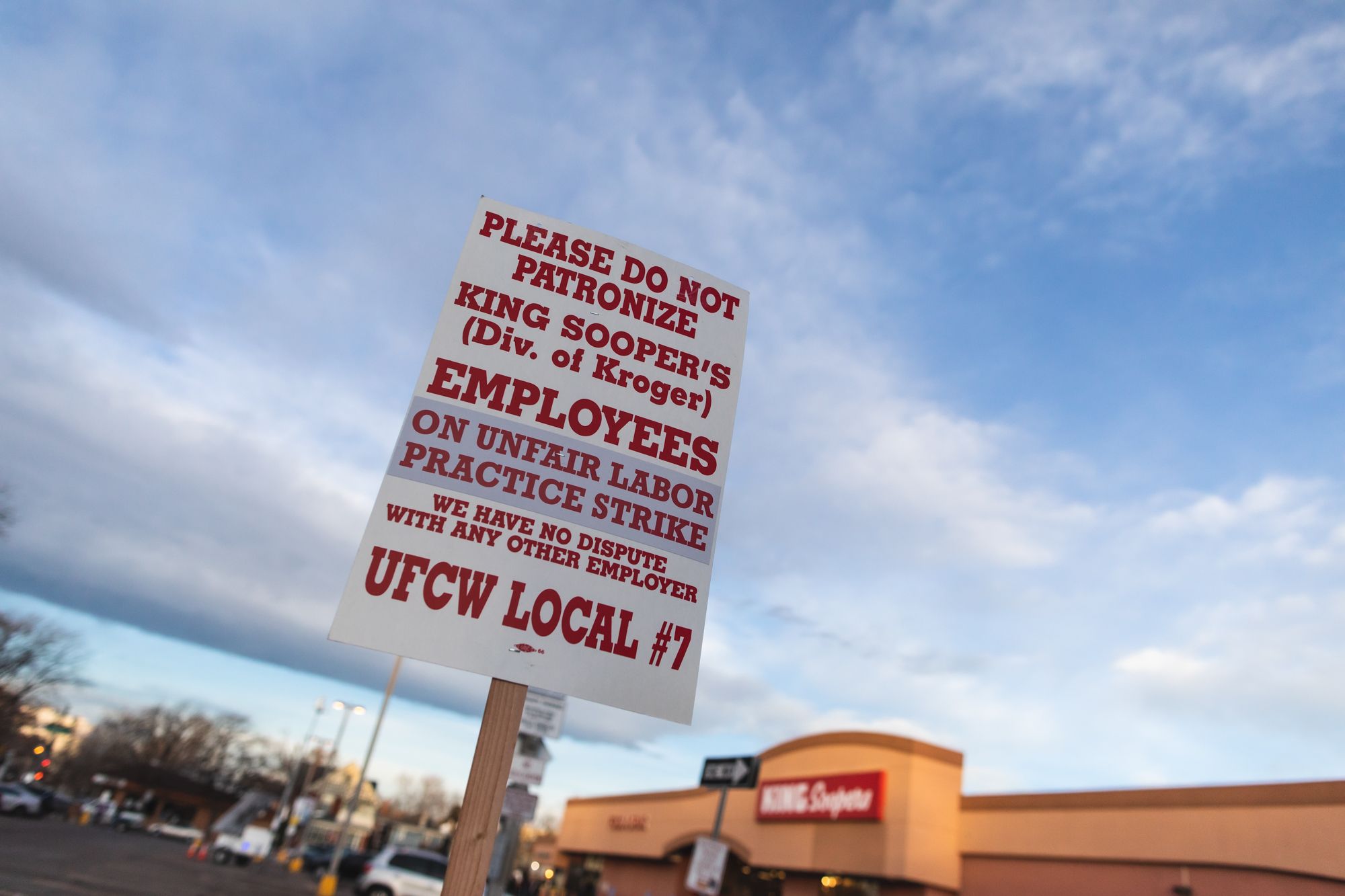 Andres Becerril, 30, is the front-end supervisor at Store #10 on Mississippi Ave in Aurora.

“Our stores have been understaffed and undersupplied since the pandemic started. When you’re a manager — and you don’t have the staff and supplies you need — your job isn’t just harder, but in our case, it can become more dangerous,” said Becerril.

In addition, a recent survey found a large number of Kroger employees are food insecure. Kroger is the parent company for King Soopers. The independent report, “Hungry at the Table,” reported on the working and living conditions of 36,000 Kroger workers in four states, including King Soopers workers in Colorado. According to the report, food insecurity affects more than two-thirds of Kroger workers.

According to UCFW Local 7, King Soopers’ “Last, Best and Final Offer” includes a “Most-Favored Nation Clause.” The clause allows King Soopers to give its workers the lowest wage of any Kroger franchise, rather than agreeing to a set wage during contract negotiations. From the union’s perspective, the offer still fails to address the fundamental needs of workers. Cordova said the union will return to the table once King Soopers has an offer that “seriously considers workers’ needs.”

“King Soopers is enjoying record profits while leaving its workers to struggle with low wages. Grocery workers ensure that our communities have access to food, but they cannot even afford to feed their own families. This is grossly unfair. King Soopers has chosen to enrich its bottom line, instead of protecting workers who have risked their lives on the front lines,” said Cordova in a press statement last week.

Usually, union contract negotiations require some form of a middle ground compromise. Thus, most unions vote to strike as a last resort. 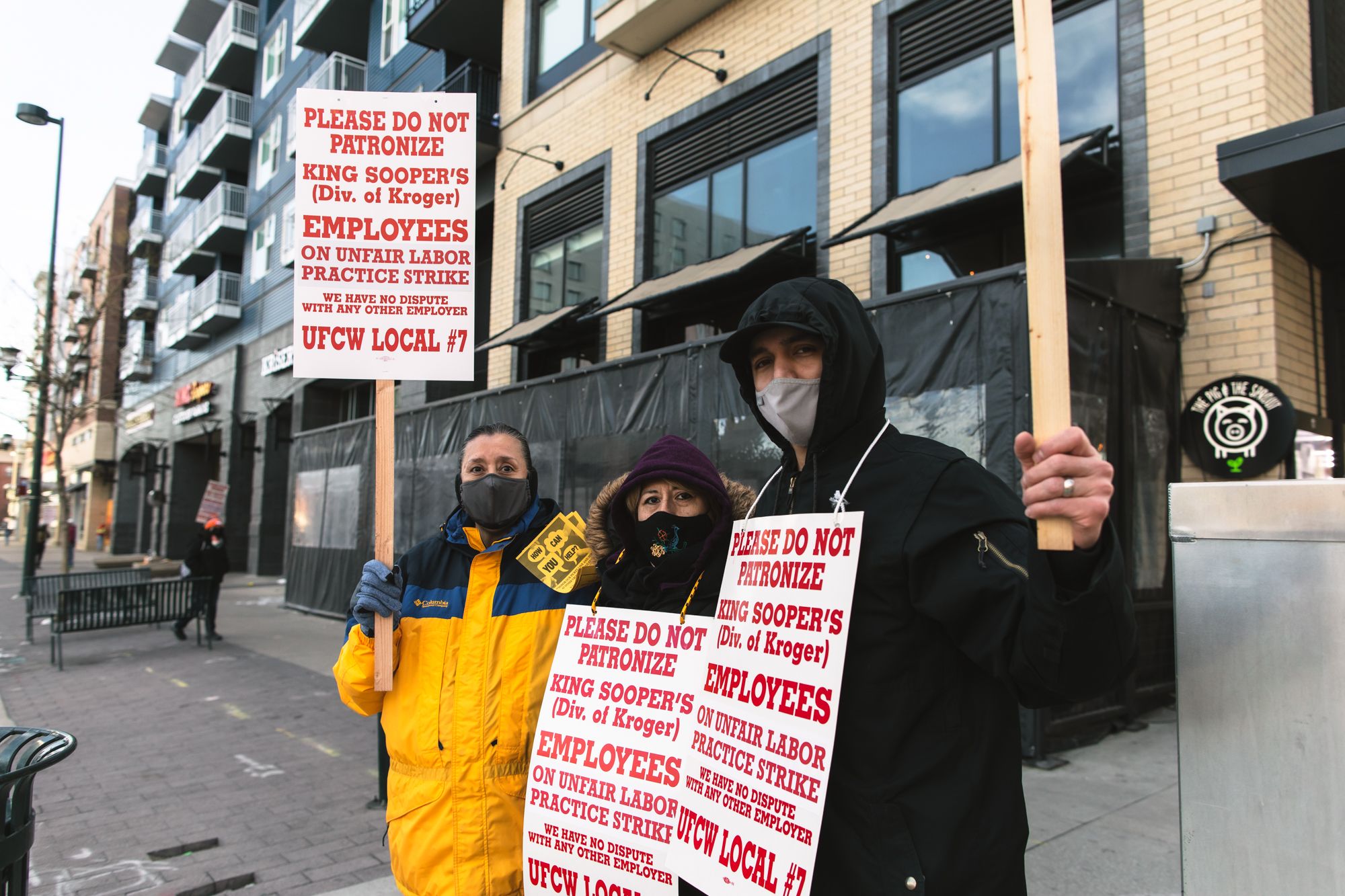 Union workers are striking against alleged unfair labor practices in regards to a safe work environment and job security for current employees.

“I’ve worked at King Soopers for 12 years, and now I’m a supervisor. I feel trapped: They pay me enough to stay, but not enough to live. My friends and I can pay rent, but we can’t save for the future. We get by on luck. We have to hope we don’t get sick, hope we don’t get a parking ticket or a flat tire,” said Becerril. 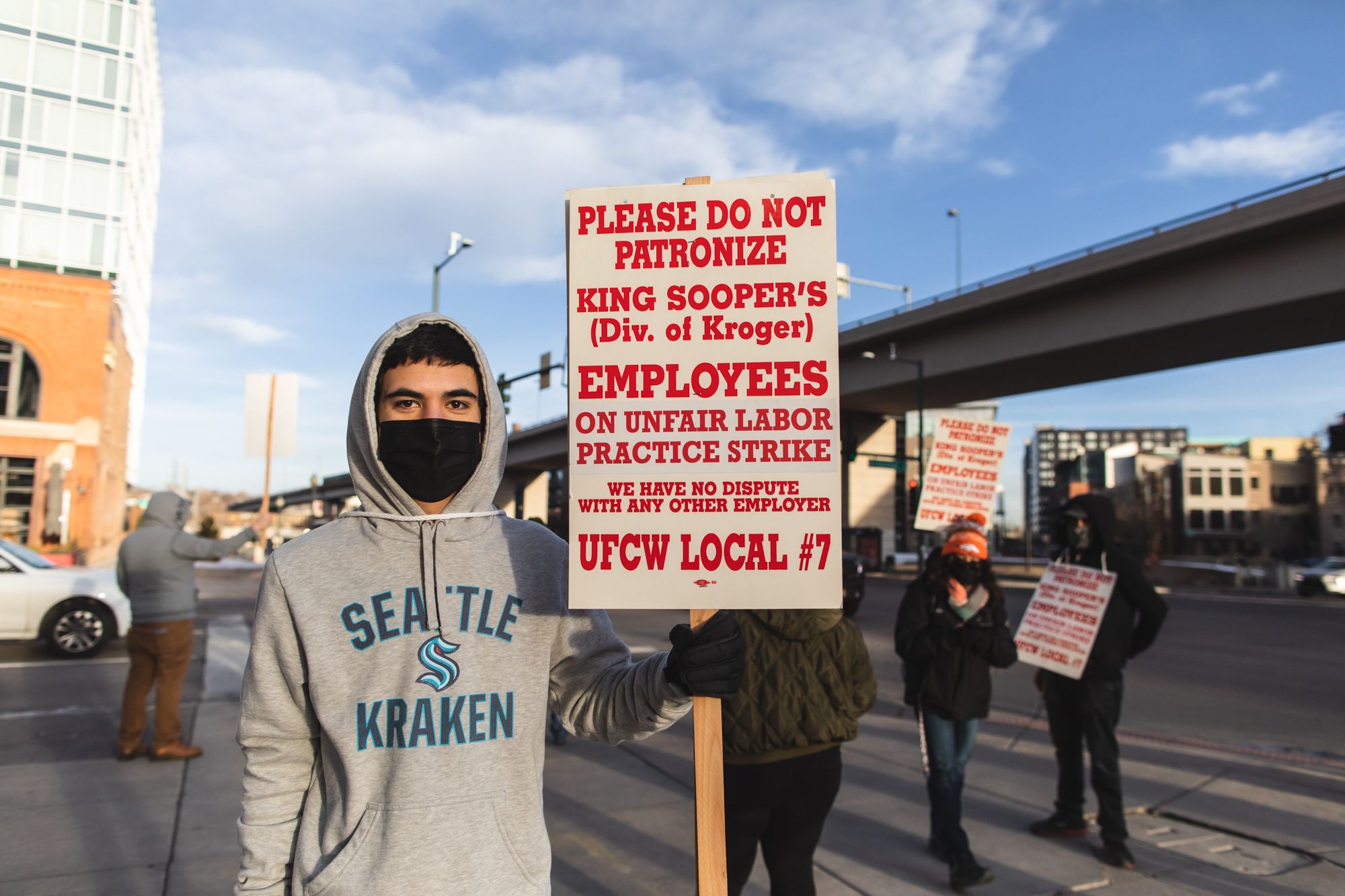 According to Cordova and Becerril, King Soopers employees are essential workers who spent the last two years in a constant state of trauma and uncertainty, with most feeling that they had no choice but to report to work.

“My mother and I are both essential workers; she’s a nurse and encountered different pandemic challenges. For me — when you work in a grocery store during a pandemic, [we learned] it was the only thing that made people feel normal for a long time. For months, the grocery store was the only place you could go. When you’re the only ‘social’ thing in town, everyone comes to you — both good and bad. People would get upset over missing items that gave them a sense of comfort and take it out on us. We lived it, we worked it. King Soopers never protected us during the pandemic,” said Becerril. 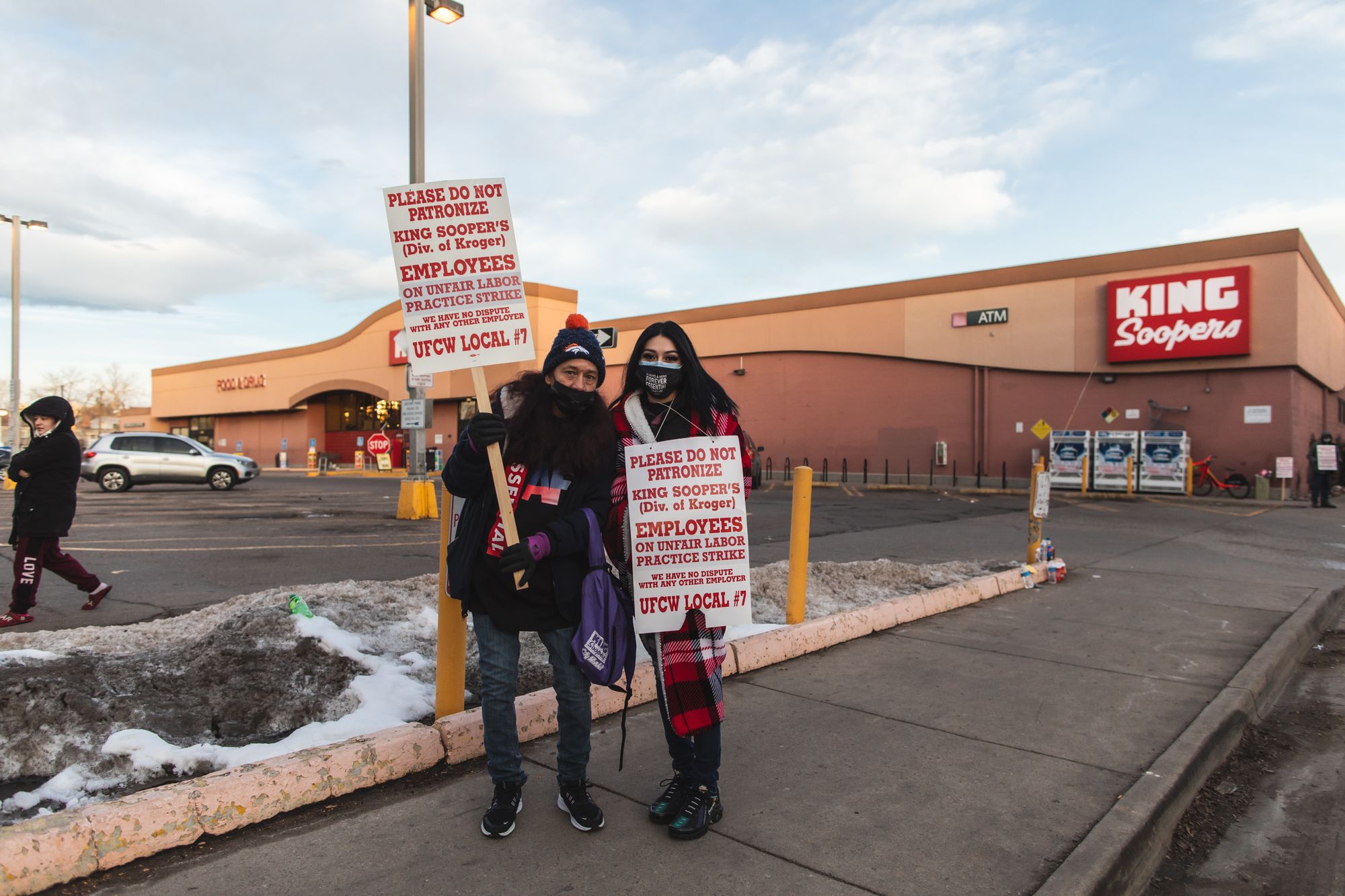 Today, workers in nearly 80 stores are on strike. It’s a fairly traditional one: Thousands of union workers are standing outside their stores in winter weather, with red and white picket signs and a sense of hope. For union workers, the last year and a half left many feeling exhausted and unprotected at work. Today, they’re excited.

In Capitol Hill, known as Denver’s gayborhood, workers are banded together outside Store #29 on Ninth Avenue. The store has a unique history. Also known as ‘Queen Soopers,’ the modest grocery store was a decades-long social hub for LGBTQ+ folks, punks, drag queens, and anyone deemed a “misfit” by mainstream society. The history gives the store added personality and character.

Capitol Hill King Soopers employees come from all walks of life, and embrace the same level of camaraderie as their vibrant customer base. At sunrise, more than 30 workers stood outside the store, with more flowing in every 10 minutes. One was handing out flyers on roller blades, a few others making sure the group had breakfast. There was palpable excitement: For what might be the first time, King Soopers workers feel empowered as they take matters into their own hands. 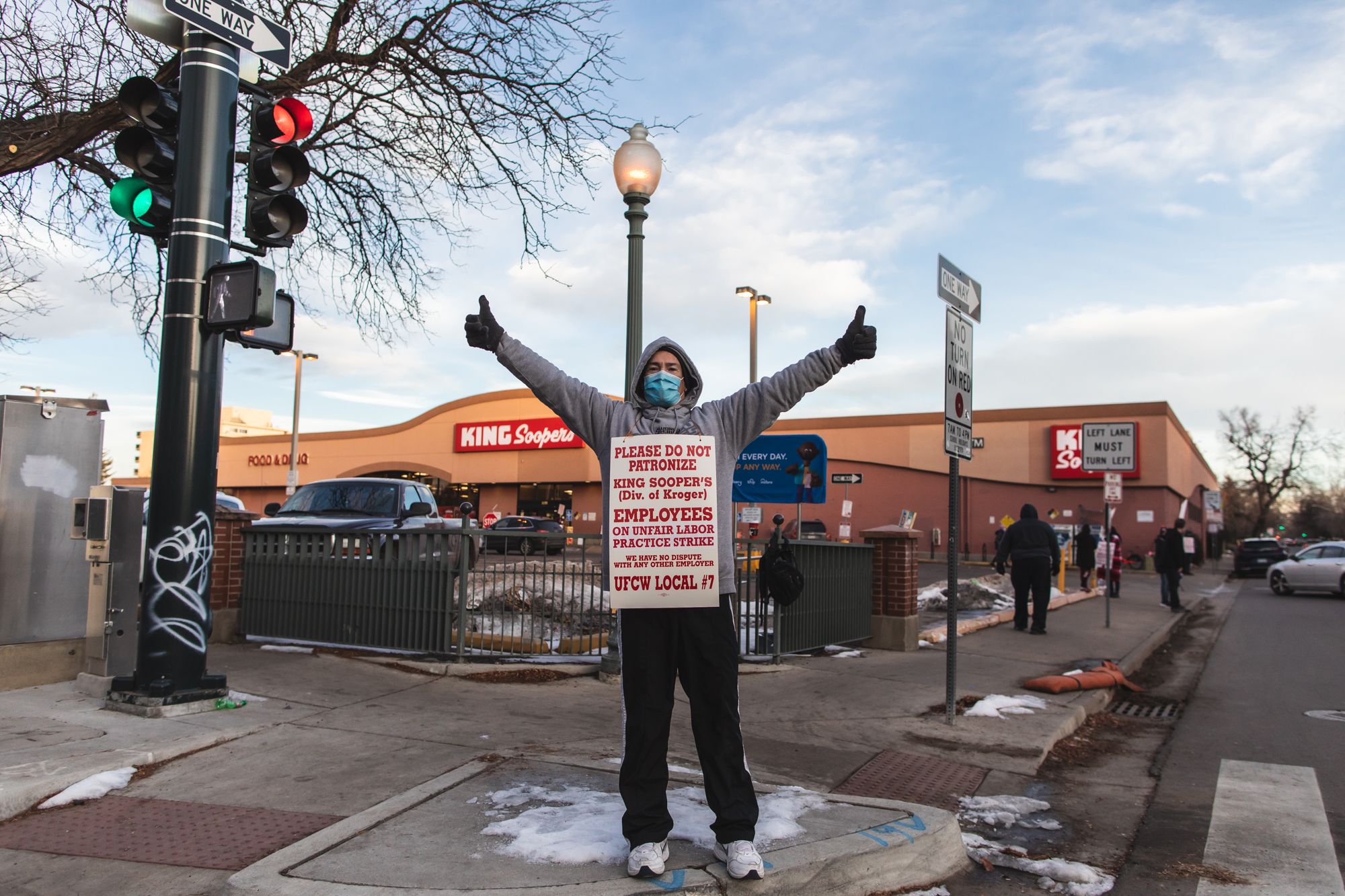 “The dangers [of working during a pandemic] are still real, still there. We asked for security guards to protect us from aggressive customers, and we never got them. But today King Soopers sent security guards to line the front doors of stores on strike. I hope King Soopers sees our strike and thinks ‘maybe we should have cared about our workers instead of being scared of them,'” said Becerril.

As explained by Cordova, King Soopers workers are exhausted. In some ways, perhaps the strike was a long time coming, following stagnating wages, extreme work conditions created by the pandemic and no real end to hazardous working conditions in sight.

“Our plea remains the same: Stop these unfair labor practices, and respect us, protect us and pay us what we deserve. UFCW Local 7 members will remain on strike until the company agrees to cease these unfair labor practices and comes to the negotiating table in good faith. During this strike, we ask for the support of our community. We are grateful for all the overwhelming support received and for the individuals, union partners, organizations that will be coming to Colorado to support our efforts and fight. We will continue to be relentless in the fight for our members,” said Cordova. 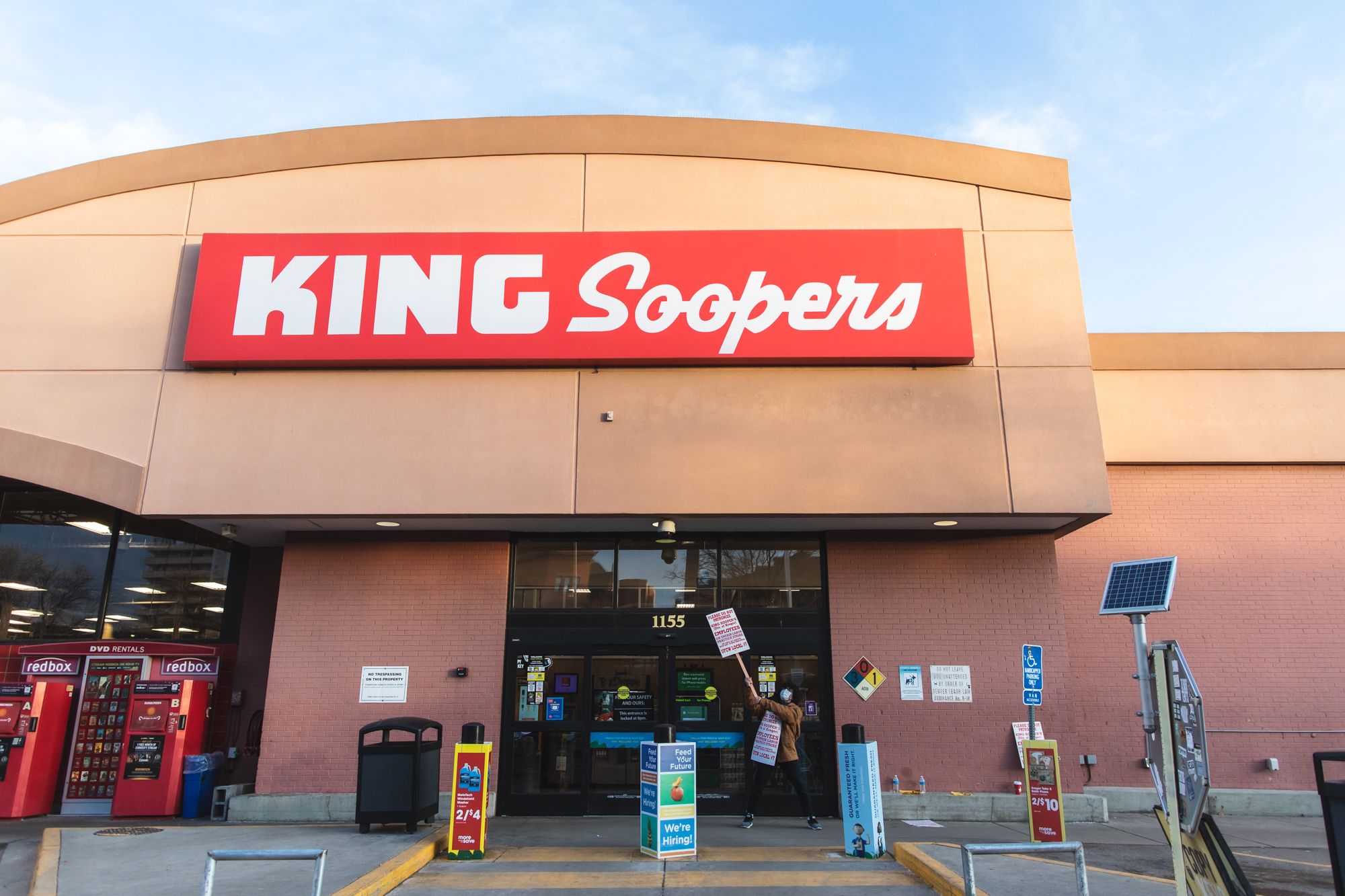 King Soopers Union workers follow a hot streak of labor strikes across the country. Last year, union workers from Kelloggs, QFC Grocery and several hospitals on the east coast went on strike for higher wages and safe work environment in the midst of unsuccessful contract negotiations.

“At King Soopers, we want what is right for our associates, and that is more money in their paychecks while continuing to receive industry-leading health-care benefits,” said Joe Kelley, president of King Soopers/City Market.

As of now, UFCW Local 7 intends to strike for three weeks, ending on February 2. Be sure to bookmark this page to keep up with this breaking story — 303 Magazine will provide updates on this article as it develops.