“This cannot and will not be allowed to continue,” said Mayor Hancock in the announcement. “This is the people’s park and we are taking steps so that everyone can once again feel safe and welcomed there.” 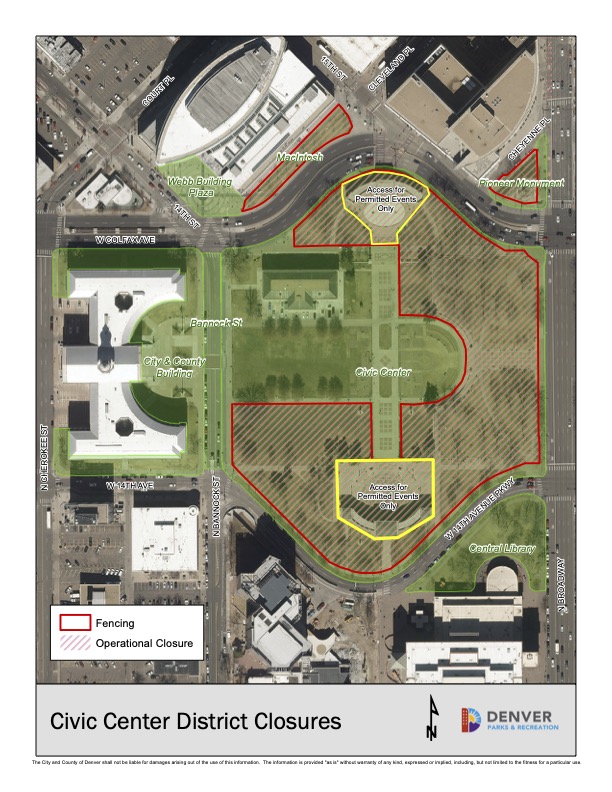 In addition to public health and safety risks, Civic Center Park and surrounding neighborhoods have seen an increase of criminal activity and substance use, “jeopardizing the public’s ability to safely enjoy one of Denver’s treasured outdoor spaces,” according to the announcement. The park closed on September 15.

On November 2, the city announced that the DDPHE had lifted its public health order on the park and on November 3 parts of it began reopening. The areas surrounding Pioneer Fountain at the corner of Broadway and Colfax, MacIntosh Park Plaza at 15th Ave and Cleveland Street, along with other areas of the park, will remain closed for ongoing restoration.

Several concerns have already been addressed and fixed, including the removal of waste and litter, abatement of rodent burrows and disposal of improperly discarded needles and other public safety hazards. In addition, the DPR has restored several areas of the park, reseeded turf and repaired irrigation along with planing 19 new trees in the park. The city will continue restoration and revitalization efforts before fully opening the park. DPR is working to add surveillance camera coverage and partnered with Xcel Energy for lighting upgrades at the park.

To prevent future damage at the park, the city is discouraging “any and all types of donations left in the park,” claiming that most donations end up as improperly discarded trash, attracting rodents and other unsanitary conditions.

“Since they closed the parks, and over by Union Station and the bus station, the city is adding rocks and other infrastructure to prevent ‘camping,’ which has caused a diaspora effect for the people who resided there,” explained Shawn Bosley, a community organizer in Denver. His organization, Feed the Streets, usually hands out meals at the park on weekends, but hasn’t been able to have a large public handout since the park closed.

Now, he distributes food and other essentials by finding unhoused camps around the city.

Following the public health order, the city enclosed the park with barricades and gating and has issued a warning to fine or arrest trespassers.

“It’s funny because they mentioned they were doing this to beautify and restore the space, but then mentioned how it was the homeless folks’ fault for letting it get so unsanitary and unhealthy,” said Bosley. “But now the folks that were receiving our help and in need of the resources we provide have to relocate to either a shelter or jail, as Denver is cracking down on camping. ”

Since the pandemic, the city of Denver has spent thousands of dollars enforcing “sweeps” in areas where unhoused residents set up camp. More recently, in late September, the city issued a permanent notice in the Five Point neighborhood, stating it will remove “unauthorized encumbrances or obstructions” in public areas on Welton and California Street between 20th, 21st and 22nd Street and Park Avenue to Welton Street.

Violent crime in Civic Center Park has increased since 2017. Crimes involving drugs, alcohol and public disorder, which are the majority of the crimes reported in the area, have risen too, according to the Denver Police Department’s crime map statistics.