Prior to founding the now-stalled Big Trouble Little Dumpling, Sam Graf and his brother Jordan Graf opened a chicken shop on one of the main drags in Fort Collins. On April 12, 2016, the duo debuted Music City Hot Chicken — a punk, funk and hip hop-fueled counter joint built around the Nashville style of fried bird. In the years that followed, the restaurant has grown into a neighborhood institution, the concentric center for many of the area’s varied subcultures and one of the state’s only purveyors of the real Tennessee heat. All novelty aside, it also fucking rocks.

For anyone who was first acquainted with Big Trouble, Music City has all the corresponding grit — with four years of accumulated stickers, tchotchkes, skate decks, books and art reinforcing the same bristly aesthetic. When the steadily-growing lines outside Sam’s house eventually drew the attention of the Larimer County Department of Health and Environment and resulted in a forced hiatus Sam said he saw coming — the restaurant owner knew he had to seek alternatives. A commissary has been floated. The possibility of a brick and mortar still remains on the table. “Dumplings aren’t dead but they’re postponed for now,” he said. 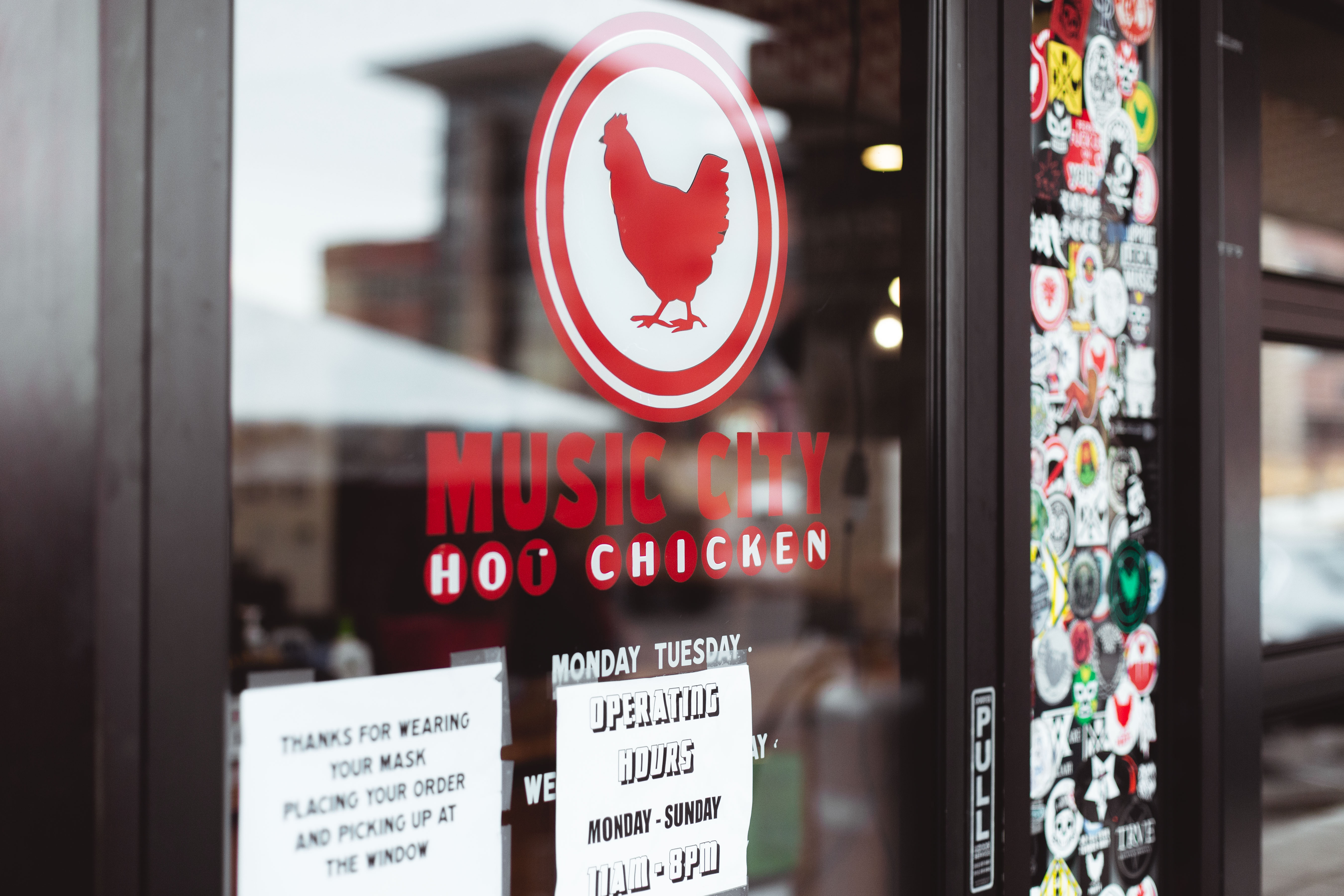 Well before Big Trouble found itself in hot water, Music City Hot Chicken was conceived after a show, though which show remains a hotly contested question. Jordan is sure inspiration landed after a Danzig and Doyle concert at The Ogden. Sam is equally certain it was something else. “I’m not sure. But I know it wasn’t that one,” he said not budging.

It is however generally agreed that after a long and eventful evening, Sam — who had recently moved back to Fort Collins following several years in Florida working with Outward Bound — agreed to make Jordan — who had also just returned from California after his career found him bouncing around an array of hotels and fine dining kitchens — some Nashville hot chicken. This was 2011.

Sam had been visiting Nashville since he fell in love with the place during a visit in 2008. Attracted by the music scene — one he describes as a proper blend of hip hop, indie and a small metal scene all overlaying the omnipresent country and honkytonk — it didn’t take long before he was under the spell of the cuisine. “Like any big city in the middle of nowhere, they attract a variety of music,” said Jordan, likening it to an amplified Denver.

“Sam had an idea and I had an execution,” continued Jordan. Though it would take some time for the idea to sprout wings. “We were putting stickers everywhere two to three years before we opened,” grinned Sam. Joined by original kitchen manager Bradley Muck — who recently took the reigns as general manager — the trio spent those valuable years meticulously distilling the project, creating a menu that is as much them as it is Nashville. Muck — who graduated with a Culinary Arts degree from Oklahoma State University — spent time as the executive chef at the Fort Collins Brewery and the northern iteration of The Kitchen, before bringing his knowledge and highbrow technique to the decidedly casual restaurant-to-be.

Music City would have survived the subsequent years and surely could have triumphed on the strength of the chicken alone. Since closing for roughly six weeks between March and the beginning of May 2020, the restaurant has reopened for pickup and delivery only. Initially serving a limited menu of sandwiches and tender plates, the spot has steadily rebuilt the list back to full capacity, with a set of monthly specials continuing unabated. “Aside from the initial closure, we haven’t had to furlough,” smiled Jordan. “We basically turned our building into a food truck,” added Muck.

For anyone ordering from the pickup window or posting up under the covered waiting area as their meals are prepared, music from the likes of The Roots, Danny Brown and the Bar-Kays can still be heard blaring through the outdoor speaker system, with heavier selections providing an even more raucous backbone. “We’ve kind wanted to be weird and flexy. We’re putting ourselves out there so it establishes a safe space even if it’s adjacent,” said Jordan. “Not everything needs to be self-explanatory,” he continued. While only a silhouette of that culture can still be heard in the place’s playlists and seen still churning behind the glass, Music City has carried on as a community hub, with collaboration and charity pulling the cart as much as ever.

Even with three annual events — an anniversary party, one held for Pride and an end of summer celebration — usually buttressing the restaurant’s humanitarian tendencies, Music City has still been successful in galvanizing local support. On July 20, 2020, the location held a fundraiser where all proceeds were donated to the Cultural Enrichment Center of Fort Collins, with the owners noting that it was one of their biggest sales days ever — a nearly two-hour wait lasting almost the entirety of service. In past years, a changing roster of local musicians featuring MF Ruckus, Plasma Canvas and Black Dots would play day-long affairs with proceeds benefitting organizations that included Launch Community Through Skateboarding and SPLASH Youth of Northern Colorado.

The main menu comprises an uncomplicated list of plates, sandwiches and sides. The various spice blends, which incorporate with the hot oil upon frying, are where the magic happens. Six levels — ranging from the heat-free Southern to the truly devastating Flammable Solid — are regularly joined by Jerk, with Mortal Kombat — a January special — completing the current roster. Whatever method folks choose to imbibe their bird, the Franch — a fancy ranch and blue cheese dressing with pureed cold-smoked tomatoes — is entirely essential. All of the other house-made condiments — including bacon-aise, spicy remoulade and honey mustard — nicely prove that the Graf’s have their sauce-oriented priorities straight, though the franch is the only one that borders on otherworldly. The tenders can also be found off-site — with a collaboration with Krazy Karl’s Pizza resulting in a Nashville tender, green chili and cream cheese pizza and a weekly with La Piadina merging the crispy bird into an Italian flatbread sandwich. “We’d still like to see it on a sushi roll,” chuckled Jordan.

Chicken has always been celebratory, sitting at the festive center of food traditions across the globe. Even without being able to stay for the show, now is as good a time as ever to come for what is surely some of the state’s finest fowl.

Music City Hot Chicken is located at 111 West Prospect Rd. C, Fort Collins. It is open for pickup and delivery every day from 11 a.m. – 8 p.m.