A letter from ilind — the alias of Isaac Linder (an abbreviation of their name) — simply opens with, “Jazz is the teacher,” coincidentally the title of a 1993 Metroplex 12-inch record by 3MB (three men in Berlin). The three men in question happen to be some of the most pivotal names in electronic music, and the track itself is a frenetic, percussive, dubbed-out seven minutes of mostly live drums with some mechanized, over sparse, celestial synths.

Moritz Von Oswald is a German percussionist and is credited as one of the founding fathers of dub techno, while Swiss-born Thomas Fehlmann is an affable weirdo and avant-garde electronic musician. Both played in Palais Schaumburg — a dadaist new wave band that sounds like a cross between This Heat and Throbbing Gristle, but jazzier — and are two of 3MB. The remaining member is none other than the great Juan Atkins, one of the most fundamental progenitors of Detroit techno. This group, 3MB, represents a bridge spanning across the Atlantic, class divide (Von Oswald is a member of the House of Bismarck, while Atkins grew up working class in Michigan) and race (Fehlmann and Von Oswald are white and Atkins is black). 3MB is built on a mutual reverence of jazz, so that when Linder writes that “‘Jazz is the teacher,’ it is a rare and absolute truth.

This mantra serves as a summation of the many lengthy conversations Linder and I have had in the context of understanding sound. One of these conversations began by asking Linder how they got into DJing in the first place, to which they answered, “So, the long story is that I dropped out of high school when I was 16 to work at a record store.” And so begins the long, musical journey of one of Denver’s brightest gems, ilind.

Linder grew up on the East Coast and spent time working at a local record store, which catalyzed their lifelong relationship with music. Digging into the many jazz and punk records available at their disposal, Linder describes days spent hungrily listening to record after record, sinking their teeth deeply into the store’s expansive catalog. Over time, Linder found themselves gravitating towards more noise-oriented and “sound art” records, with a steady diet of hip-hop mixed in. “I distinctly remember when DJ Shadow’s Endtroducing… record came out,” they recalled. With Baltimore in close proximity to the record shop, pretty soon Linder stumbled across the B-more club 12-inch records that arrived at the shop by the crate-load.

As they immersed themselves into sample-based and club-oriented music, a realization dawned on Linder. “Being a musician doesn’t necessarily mean learning an instrument or be formally trained in any way. Rather, I can use records and samples and use the history to make some kind of work,” they said, a profound testament to the power of DJing as engagement with records others have crafted—a pure distillation of remix culture that took over the early 2000s.

Eventually, Linder arrived in Colorado. While a student at Naropa University in Boulder, they met another local DJ, Lauren Zwicky, aka L.A. Zwicky. The two quickly joined forces with another friend, Travis Egedy — aka Pictureplane — to launch a monthly party at Meadowlark. The party continued for a long while and only ended when Pictureplane relocated to New York. Linder and Zwicky continued to work together. Zwicky ran a long-standing queer dance party called Sass Capacity, and eventually, Linder launched a blog and mix series, Abstract Without Abstraction (AW/OA). 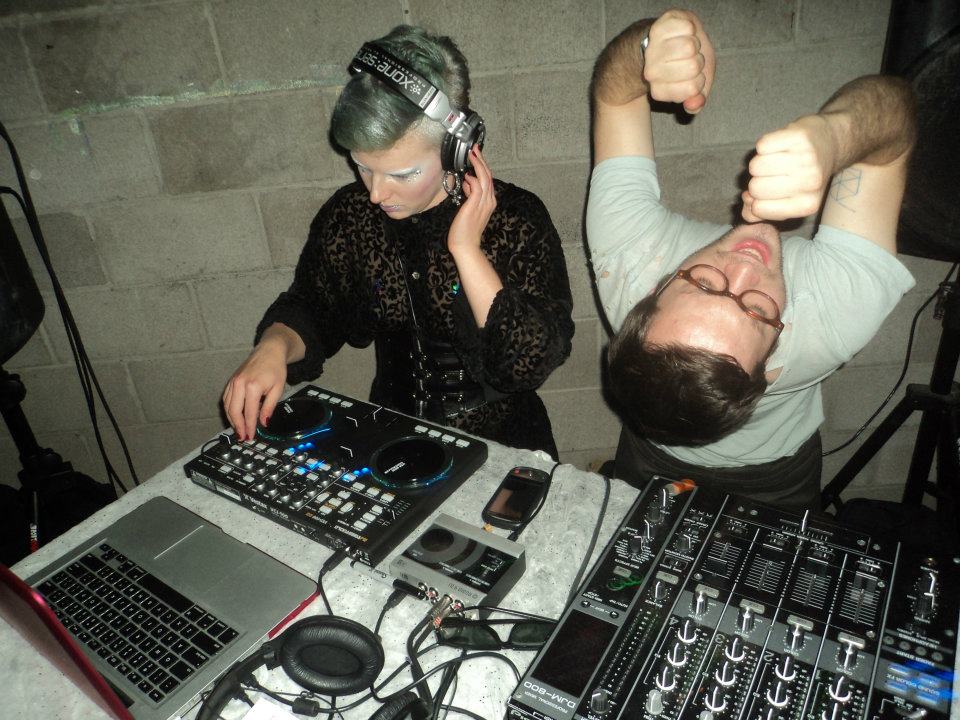 “Music, in some form or another, has just been a part of my life for so long I just don’t see it ever going anywhere,” said Linder. What more befitting than a blog to document their forays into the deepest corners of boundary-bending soundscapes? Spanning the harshest gabber to recordings of reverberating healing stones, AW/OA truly embodies some of the most abstract unsheathing and dissection of conceptual sound in today’s more experimental pockets of sound art.

“Over the past few months, I’ve been having a particularly difficult time listening to the normal nebulae of rave-adjacent music that I often find myself listening to.” In their words however, expectations be damned, as Linder resolved to double down on the records that they’re actually listening to right now — the records that have been bringing them much-needed slivers of energy, solace, and inspiration. In particular, they are 10 tracks that paint a picture of the grief that Linder holds in regard to the country we live in. These tracks have helped Linder reconnect with the vision of a better present worth working towards.

What emerged from Linder’s library is something like a kind of hanging Calder mobile, a constellation of moments from the ever-expanding cosmos of Black classical music — which, according to Linder, should always be written in the plural as “musics” when discussed through the anthropological lens.

A spacious, twenty-one minute, electro-acoustic elegy, multi-instrumentalist Leroy Jenkins masterfully plays his violin alongside Anthony Davis, Andrew Cyrille, George Lewis, and Richard Teitelbaum. “Space Minds, New Worlds, Survival of America” takes up the entire A-side of the record, which is broken into six discreet chapters, according to the liner notes.

Linder first encountered Leroy Jenkins while perusing through the work of composer Anthony Braxton, who wrote a song titled, “Dedicated to Multi-Instrumentalist Leroy Jenkins,” on his landmark 1969 record of solo alto saxophone music, “For Alto.” Only later did Linder come to find out that Jenkins was associated with Chicago’s AACM (Association for the Advancement of Creative Musicians).

Until artists like Braxton and others came along and popularized solo improvisation, jazz was by and large (and with the exception of recordings on piano), a group activity — quartets, quintets, big bands, ensembles, orchestras and communal “arkestras” (most famously Sun Ra’s Arkestra). In 1961, after years on the road during the Jim Crowe era,  Tapscott settled in Los Angeles to create the Pan-Afrikan Peoples Arkestra in order to preserve works from Black composers and artists. The Ark is still active to this day and has seen notable musicians pass through its ranks, including Kamasi Washington.

Speaking of Sun Ra, Ronnie Boykins was a bassist in Sun Ra’s Arkestra, stepping out as a bandleader for the first and only time on this recording.

Mingus came up with the name of this track after reading newspaper articles about the Tuskegee Syphilis Study & Louisiana State Penitentiary. Regardless of the origin, the message is as clear as day — we’ve had to confront the racist roots of this country for a long time, and clearly, we’ve failed to adequately address the grip of white supremacy in America, as the song title is just as relevant today as it was in 1975.

Originally penned by the communist composer and arranger Earl Robinson (who also wrote campaign songs for Theodore Roosevelt, Henry A. Wallace and eventually Jesse Jackson) in the early ’40s, the tune was memorialized by Frank Sinatra in the eponymous post-war short that attempted to address anti-semitism in the States before it went on to become a jazz standard covered by many musicians.

Earl Robinson’s son Perry Robinson was a free-jazz clarinetist whose career overlapped with a handful of the other artists included on this list. Most interestingly, Perry was invited to Poland to play with the legendary tenor sax player Archie Shepp in 1962 at the 8th World Festival of Youth and Students.  Shepp was a deep admirer of Earl Robinson’s work and went on to release a whole record titled “The House I Live In” in 1963. In response to the music festival, the CIA covertly funded a counter-festival to take place at the same time as a propaganda stunt to attract attention away and to try to show the Soviets that America was culturally tolerant and that jazz was ultimately a tool of democracy.

The classic Coltrane quartet pays tribute to the four children killed in the 16th Street Baptist Church bombing — an attack carried out by the KKK in 1963 on a Black church in Birmingham, Alabama.

Carrying the momentum in the deeply mournful energy of the last track, “The Rain” was penned by another musician who was raised, in part, within Sun Ra’s Arkestra — Eddie Gale. The late Gale, who passed away in July of this year, is memorialized in a stint of Ra records from the late ’70s. This record is a totaling collective, swirling, coordinated energy akin to Horace Tapscott’s Pan-Afrikan Peoples Arkestra. No less than 17 players played together on this record, creating one of Linder’s favorite examples of music that is emotional, cathartic, fearless and an expression of a group’s longing for liberation and justice.

Mentioned earlier, here Shepp appears alongside members of the AACM to create a powerfully emotive piece that captures the churning pain and fiery desire of loss, liberation and revolution. Much of Shepp’s work engages with the politics of liberation, namely with pieces such as “Attica Blues.”

Completely unmistakable, this vocal version of Sanders’ “You’ve Got to Have Freedom,” is incendiary and corrosively acidic as it’s played with such a divine, ecstatic tone. There’s nothing like the joy and verve of this track, and the harmonizing vocals sound like a chorus of angels. Linder picked up their copy on their first visit to Phonica records in London when it was reissued in 2018. In the words of Albert Ayler, “Trane [Coltrane] was the father, Pharoah was the son and I [Ayler] was the Holy Ghost.”

This gorgeous piece turned pseudo-standard was originally written in 1942 and covered by many, most notably Lionel Hampton, Chet Baker and Lester Young with Oscar Peterson. This version done by Kirk includes the scaling improvisations Kirk was notorious for. Kirk, who was blind from a young age, was notorious in his ability to play multiple instruments at once, even after suffering a stroke in 1975 and losing mobility on one side of his body, he still managed to play multiple instruments at once.

In Linder’s words, “There’s simply too much incredible music in the densely interwoven histories, tracing back to the twin capitals of New Orleans and Kansas City to be able to repay the full debt of gratitude that we owe to all of the masters of this music. [There are] easily a hundred other names I wish I could share here.”

These 10 jazz pieces are a small start, a beautifully adventurous snapshot of the vast ocean of jazz relics crafted by the masters.