“If I could have one wish, it would be to live a life full of meaning and wonder,” folk singer James Lee Baker croons on the title track of his upcoming album, 100 Summers. For Baker, the album was a journey to discovering a new sense of self and appreciating the time we’re given. He’s filled his new project with loves lost and lessons learned, all through his unique brand of storytelling.

Baker grew up in a conservative and religious family in Amarillo, Texas, and there is where his love for creating music was born. With a family highly involved in the church and his father a Baptist minister, Baker witnessed firsthand the ability of pastors and deacons to influence their congregations. He began to see that there were opportunities to deliver his own message, should he be able to find it.

“All the men in my family were deacons or pastors of churches, and so all of all of them stood up in front of folks and delivered a message — a message of hope and a message of joy or a message of condemnation of other communities,” he said. “And I realized that there was some opportunity there, and so what was my message?” 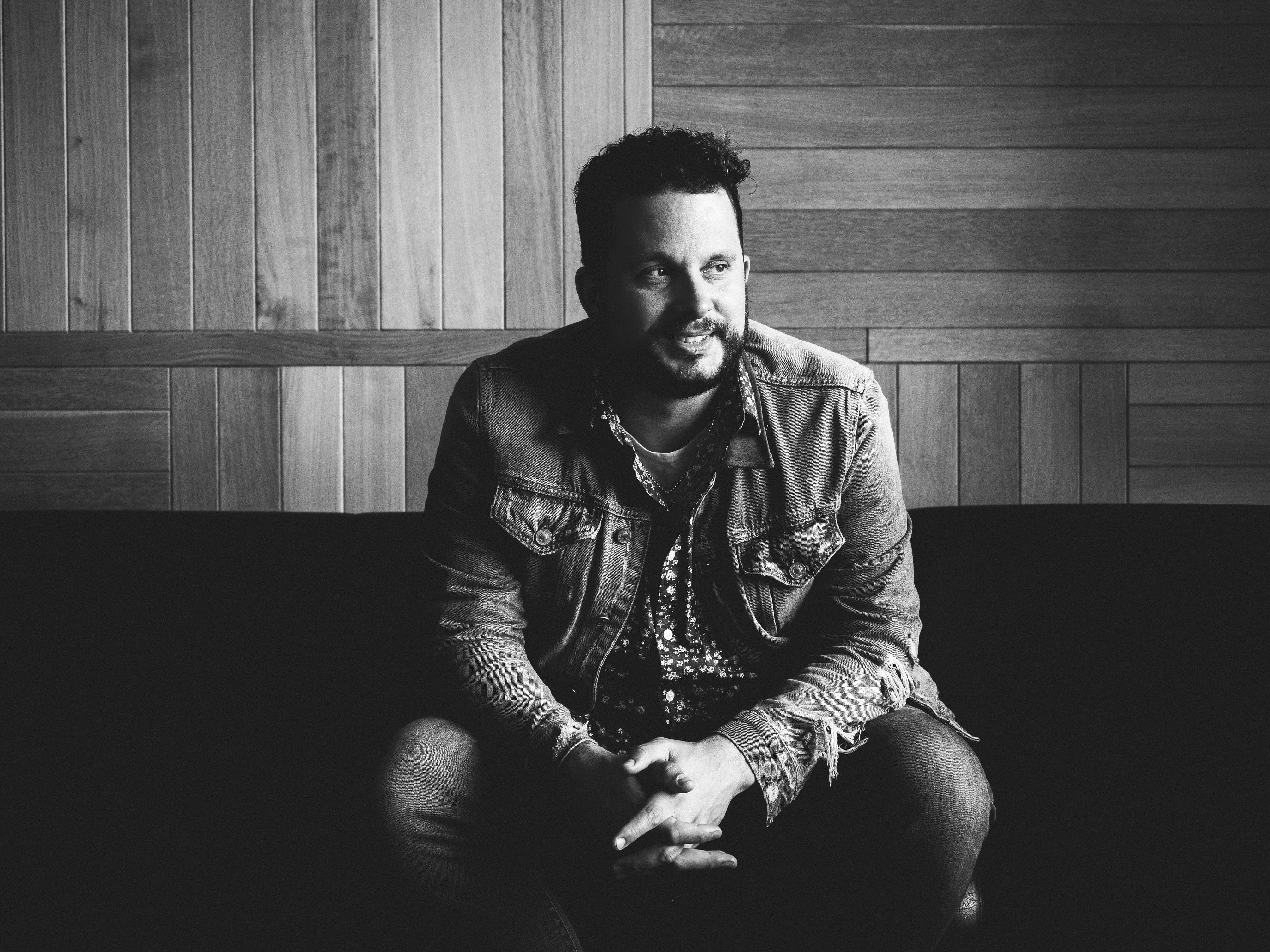 As Baker grew older, he began to struggle with what he saw as hypocrisy and ignorance in the church. “For a long time, I grew quite cynical of it,” he described. “Not only cynical of the world but when I realized my perspective changed, I kind of flipped the other way and I became cynical about the religious communities out there.” When Baker eventually left religion, he felt an acute loss in his life. Leaving a belief system that was the foundation for his family and community created a feeling of disconnect and led him to continue seeking answers in other places. “I went through a journey, sometimes a very lonely and empty journey, trying to figure out the answers to what I was seeking,  the comfort that I needed as a temporary being — as a human.”

Through this journey, Baker explored other religions and holistic practices to find a belief system that most closely aligned with him personally. While he doesn’t necessarily subscribe to a singular belief, he says that Tibetan Buddhism is what he most identifies with spiritually.

“I still have hope in a lot of different things, faith in all the pieces that each of these religions brings to humanity and that is, we are all one consciousness. Bill Hicks said that ‘life is only a dream, and we are the imagination of ourselves,’ and you can say that however you want, but in the end, we’re all one, we’re all the same and we all have the same struggles.”

Baker found his way to Denver where he went in search of his authentic self. He felt that continuing to live in Amarillo would hinder his true self-expression, and he knew that the only way to connect with people was through being genuine and honest about the person that he is.

“I knew in order for me to reach people, I needed to be authentic, I needed to be me, and I needed to not put on a cover or a mask, or wear a cowboy hat or something like that. I just needed to wear my tattoos and my sacred geometry necklaces and just be me. I couldn’t do that in Texas — I can’t do that in Amarillo. Among other reasons, I just felt like a move to Denver was appropriate. That’s why I’m still getting my feet wet here. But, this community is very accepting and is in some ways a pioneering community of the esoteric — the esoteric practices and beliefs and ideals and so, I feel more at home here. I feel safe here. I feel like I can connect to people more here.” 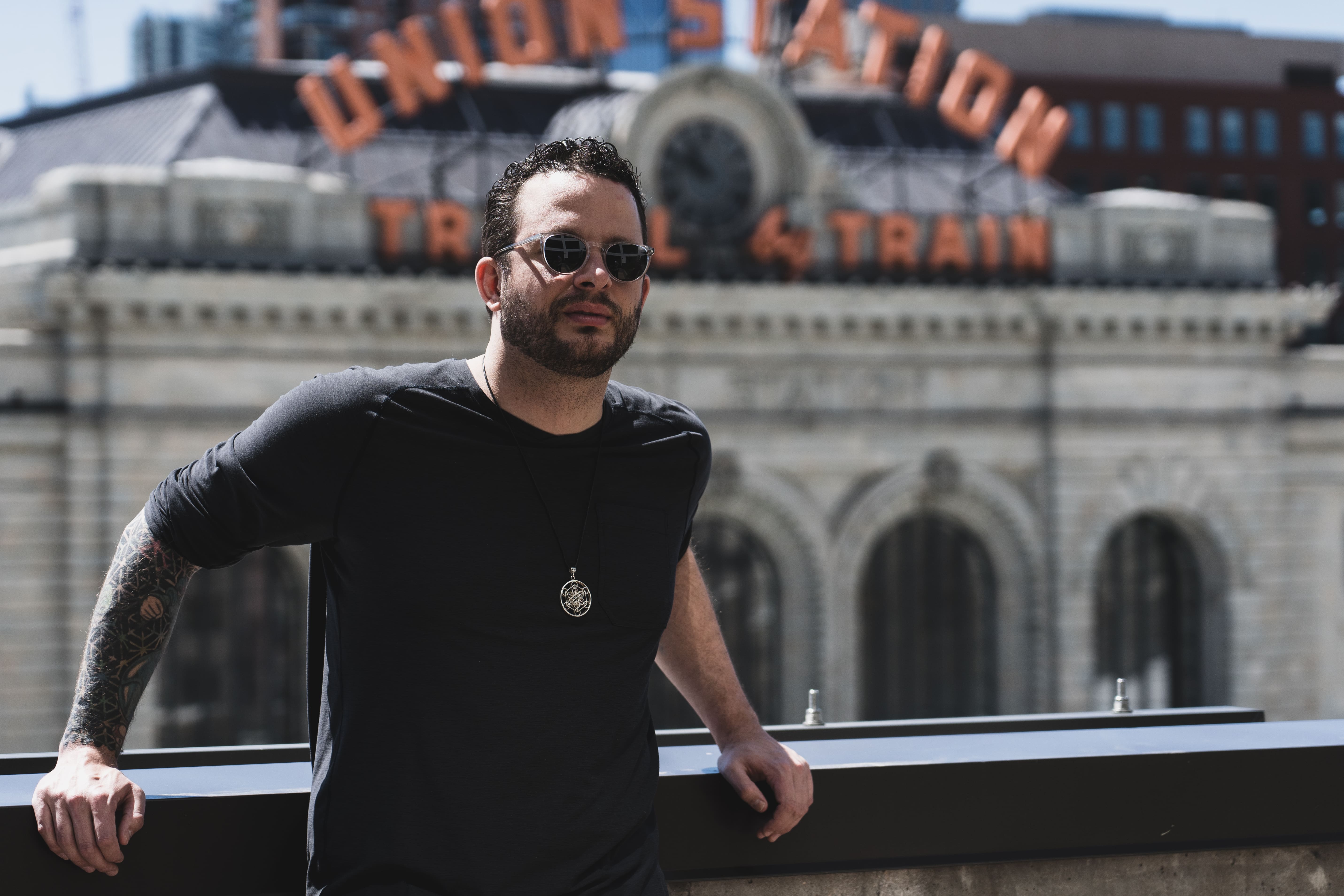 Baker’s vessel of choice for delivering his message became folk music when he found that he liked the environments in which it was often performed live. “I tend to shy away from getting out there and just playing for the sake of playing, so I tend to lean more towards venues like Swallow Hill,” he said, when describing his favorite venues in Denver. “Then, I’ve played a couple of house concerts, which have actually been the most engaging — people will sit down in other folks’ living rooms and have a glass of wine and they’ll listen to the songs.”

When creating 100 Summers, Baker drew on the support of many seasoned professionals to create an album that encompassed all parts of his message. Some of these collaborators included Chris Bell (The Eagles, Don Henley, Christopher Cross), Doug Pettibone (John Mayer, Jewel, Lucinda Williams), Roscoe Beck (Leonard Cohen, Eric Johnson), Matt Hubbard (Willie Nelson, 7 Walkers) and Paul Simon’s Grammy-winning accompanist Joel Guzman. “Yes, I was intimidated, I think it’s just hard to not be when they walk in,” Baker laughingly recalls. “It was a dream come true, truly, and not just because they were who they were as a name or as an artist or who they worked with, but because of how professional they were. It was just the greatest time of my life.” 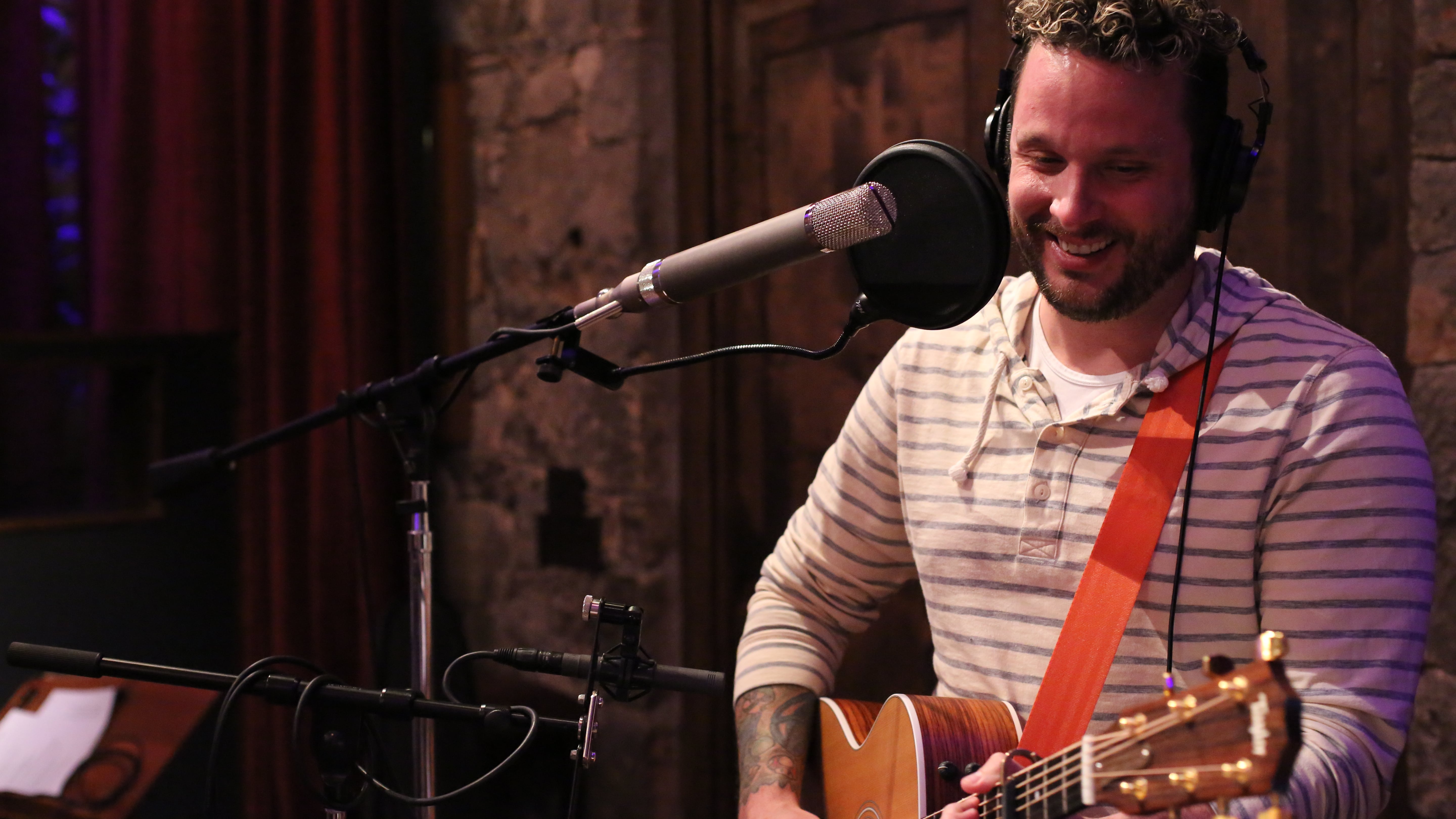 To create a more full experience for 100 Summers, Baker decided to make the album more of a multimedia experience. He commissioned an Indonesian freelance artist, Zulfikri Mokoagow, to create unique artwork for every song on the album. Each piece of artwork contains hidden elements of symbolism that connect to Baker’s inspiration for each song. “There’s so much character — it wasn’t too realistic, it wasn’t too cartoonish,” he said. “I thought about talking about all of the parts of the images that, you know, stick out or infer meaning and things like that, but I shied away from that. So yeah, there are little easter eggs in there.”

A lot of Baker’s previous projects focused more on introspection making this album a new endeavor as he created it from a more extrospective mindset. He attributes this change to his mentor, singer-songwriter Ellis Paul.

“One of the first things he asked me, sort of like a drill sergeant was like, ‘What are you trying to say? Once I realized that I needed to tell a story, the well ran dry when I was looking inside of myself. I ran out of things to say because you can only talk about yourself so much before you realize our stories as individuals, sometimes they are interesting, they’re personal to us, but we get to translate them to the world. Then, the world has to receive it by them connecting to it too. So we have to share a common place. I think at a certain point, I just kind of realized, okay, why don’t I try and look at writing songs about other people. What’s that experience like?” 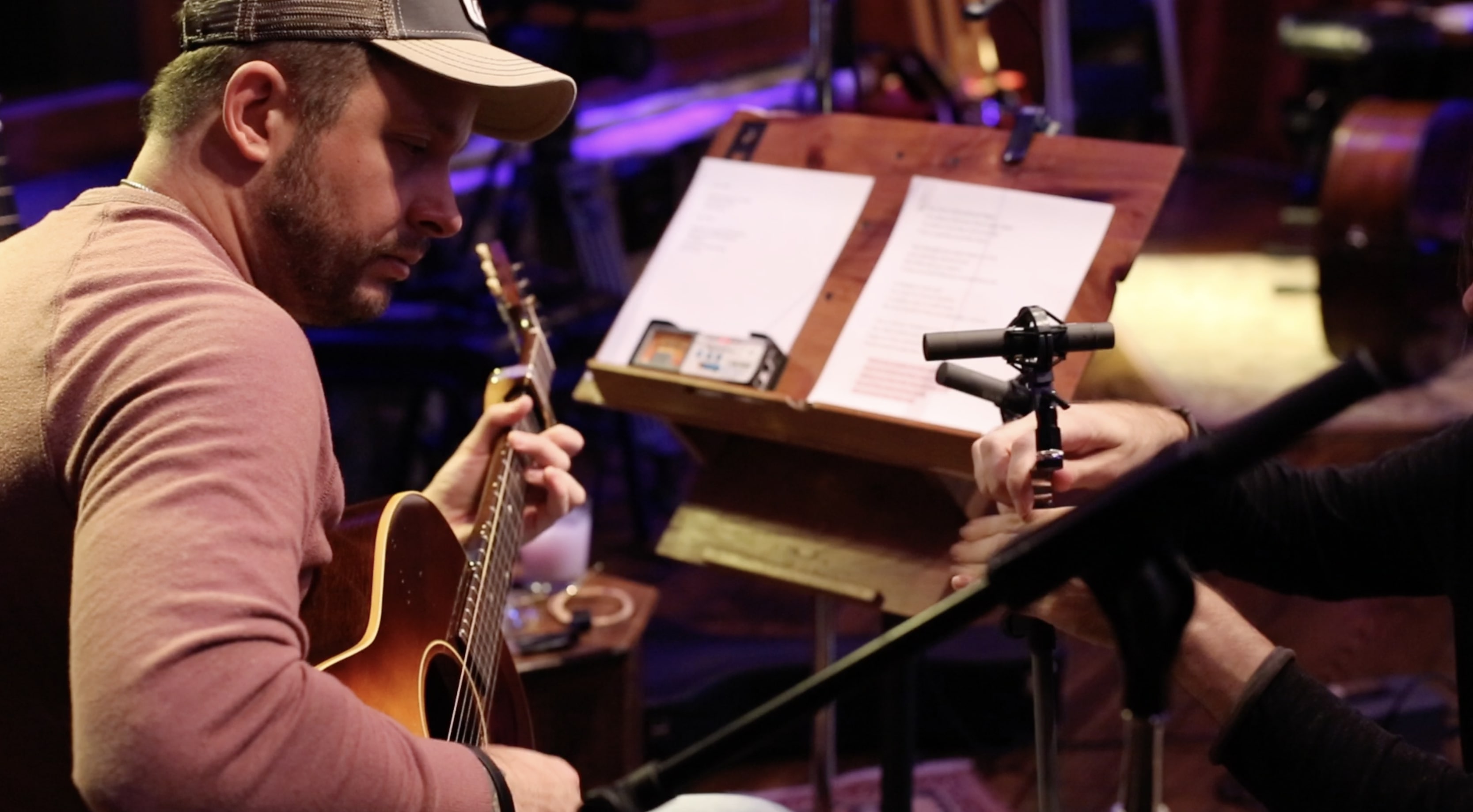 Father’s Day marked Baker’s first attempt at writing a song for someone else, his father, a song called “The Last Cowboy in Hutchinson County.” He remembered his family’s emotional reaction to the song.

“It was a gift to him, and I can’t tell you how much joy it brought to me and to my family to do that. My mom called me, she said, ‘Your dad, he never cries, but he’s in tears.’ To see the impact that my music had on my father, I realized how much power there was to positively impact people through my message because they’re listening. What I realized is that if you tell someone’s story, and it’s purely their story, and it’s outside of your perspective, it’s harder for people to connect to it. You tend to not be as convincing. You’re more convincing when you can take someone else’s story and connect your own emotions to it. I had to draw from my own observations of my father and all the times that my dad was at work and not at home, and, you know, to see him come home with the metal dust on his hands, to understand what he went through as a machinist.”

However, that’s not to say every song on the album was written for someone else. Baker’s own personal experiences with divorce shaped the story of the album, the transformation he underwent as he uncoupled himself from another person and became independent once again. “ It was rediscovering myself — that’s really where the inspiration came for a lot of this stuff,” he said. “I was caught in this process of trying to understand as an independent person what my values were, my virtues, what goals were, what was I trying to become and to do it authentically and to not compromise.” 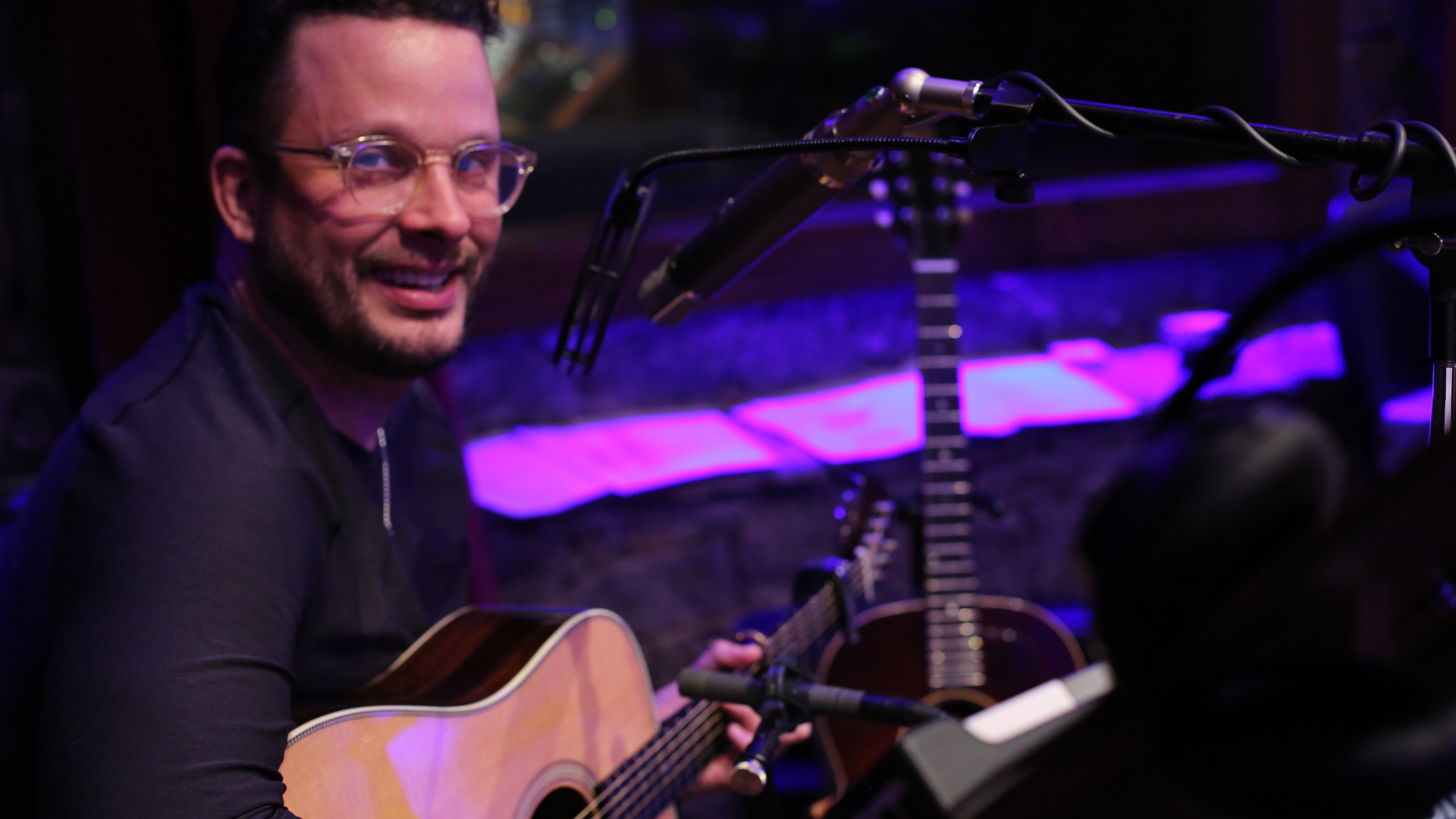 Ultimately, what Baker created is a moving testament to his mission to live a life of meaning. Even outside of times like these, when finding small joys in the midst of a crisis can take a lot of effort, Baker cultivated a way of life that provides joy in even the most menial task, like raking the yard. “The reality is that I will either go down in history or obscurity, and neither of them matter anyways, eventually everything just disappears,” he said.

“I just want to enjoy being alive and loving those around me — I think that is what’s gonna give me meaning. It’s weird, when I put all this stuff out, you know as an artist or any creative person you want fame, right? All of us want some level of visibility in society. At a certain point I had this breakthrough experience with this album where I realized, it doesn’t matter if I’m famous or not. I’ve got to let go. I’ve just got to let go and just make this — make it beautiful, make it be unapologetic. Pull out the tarot cards. Who cares if your Baptist dad watches the video? Who cares if you’ve got a sleeve full of tattoos? It’s a long-winded answer saying this album helped me discover that I’ve got to be myself. It doesn’t matter if I get bigger or not, I don’t care. I just want to enjoy it. You know?”

All photography by Delaney Gibson, John Hunt and Sarah Randolph.