A few blocks east of the Denver Art Museum next to the restaurant City O’ City there sits a black door. For seven years, this door has been the home of a piece of street art by the elusive and anonymous street artist bunny M. At first, the piece was the torso of a woman, wearing a floral headdress, and bunny M named her black madonna. Since then, the door and black madonna have gone through a series of evolutions as stickers, wheatpastes and graffiti accessorized them. The head of black madonna has always stayed fresh because bunny M has continuously replaced it. But now she is offering one person the chance to take home one of the heads as their own.

“I had painted her newest head all day on May 24, the day before George Floyd was murdered. I wondered why she was crying, she had never asked to be painted with tears before,” said bunny M.

bunny M explained, “as the artist of the black madonna, I’m holding a fundraiser where 100% of donations go directly to Color of Change, with various gifts offered depending on donation tier… I feel called upon as a human to find a way to aid, in any positive way I can, the Black Lives Matter movement.”

Color of Change is an online racial justice organization founded in 2005 with 1.7 million members. Its mission is to “design campaigns powerful enough to end practices that unfairly hold black people back and champion solutions that move us all forward.” The organization’s work includes holding prosecutors accountable, ending money bail, decriminalizing poverty, implementing fair sentencing, stopping prison expansion and stopping anti-black violence. One of the most successful parts of Color of Change is its ability to “move decision-makers in corporations and governments” — something the racial justice movement needs more than love or allyship.

“As I researched, I find that Color of Change is aggressively forward-thinking, using a strong online presence and direct tools to push for racial justice, fairness and equality in our country,” bunny M said. “Their strategy is suited for this time in our history and speaks clearly to this generation.” One of the efforts by Color of Change that bunny M mentioned is the searchable database of prosecutors in all local districts in the country, “in order to lift the veil on who these attorneys are so they can be held accountable” she added.

A good example of Color of Change’s ability to confront large corporations and institutions and demand justice happened just today, when Airbnb launched an initiative to combat bias against BIPOC users of the platform. Color of Change’s president Rashad Robinson said “corporations have to put considerable resources into fighting discrimination on their platforms and they have to make it an operational priority” in an interview with USA TODAY.

bunny M appreciates Color of Change and the racial justice work it accomplishes, which is why she has chosen to funnel all of the donations from her fundraiser to it. While Color of Change meets with corporations, petitions for political equality, fights against racist media narratives and calls for accountability, the platform it created allows anyone to organize their own fight for justice and have a community of nearly two million to help, bunny M explained. “Fighting the beast from all sides.” 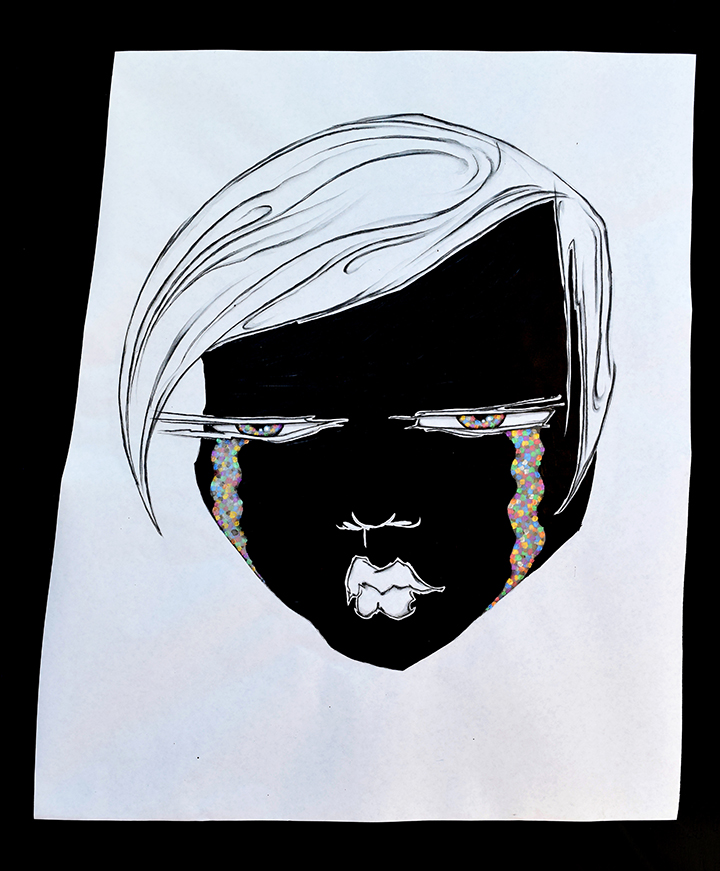 The black madonna head. Photo courtesy of the artist

In order to be considered as the lucky winner of one of the original black madonna heads, you’ll have to donate more than $25 before July 4, 2020. The head (pictured above) spent time on the black door and is steeped with the stories of the street. For street art lovers, this is an incredibly rare gem. When the fundraiser kicked off on June 6, it reached over a quarter of its goal raising more than $250 in a single day. Although the GoFundMe page was set at $1,000 originally, bunny M hopes to surpass that in order to give Color of Change as big a donation as possible. At the time of this article’s publishing, the fundraiser has gathered $660 from 12 people.

On the fundraiser page, bunny M wrote her thoughts about the current times:

“I have heard expressions of despair for our future, or the idea that a message was lost to violence, but I strongly disagree. I have been in the protest, in the love, pain, compassion, empathy, hope, unity, frustration, anger and beauty. I see the birth of a new generation who knows our differences are our strengths, that love is always the answer and that injustice like what we are witnessing cannot be permitted, nor ignored. Our moral souls know this without a doubt. So we will stand together, hearts open, and recognize our raw creative power to reshape the world.”

For more information about Color of Change, go here.

In order to be considered for the giveaway, email [email protected] with your name, mailing address and a screenshot of your donation receipt before July 4, 2020.