For just over a decade, intricately hand-painted works have appeared on the streets of New York City, San Francisco, New Orleans, Paris, London and Denver by the underground street artist bunny M. Sometimes the pieces are in highly trafficked areas while others are only discoverable for those with a keen eye and a wandering path. But luckily here in Denver until the end of December, the art gallery Leon is showcasing a solo show of bunny M’s work, beasts of burden, that highlights her incredible techniques and proprietary materials.

bunny M considers herself a fine artist, a painter and a vandal. She’s painted elaborate commissioned murals in the middle of the day, and she’s glued paintings to walls as gifts. But the scope of her creations goes beyond the streets and has taken place on wood and other reclaimed materials in a studio as well. “I paint anywhere and everywhere,” bunny M explained, “every piece I have ever given to the streets has been a completely hand-painted original.”

beasts of burden welcomes viewers into bunny M’s creative studio practice over the last three years, where spritely creatures form bridges between our world and theirs. In the 26 paintings, there are 25 “beasts” that sprung to life through bunny M’s subconscious, and one humanoid being who wears the pelt of a beast. Although some have familiar shapes — like teddy bears and bunnies — they do not prescribe to any label as such. bunny M sees these paintings as magic, spiritual entities that are universal in their origin and independent.

Each beast has its own unique identity, fabricated out of patterns that are abstractly reminiscent of fur or pelts. All but one are disembodied heads, floating on backgrounds that are painted by bunny M with almost as much detail as the beasts themselves. The combination of bright colors, dizzying patterns and thick glitter accessories add up to create an optical illusion when face-to-face with one of the paintings — as if you’re meeting the beast halfway through a portal to another dimension. This visual wormhole effect that bunny M creates is a fitting framework to appreciate her work, which is both playful and challenging.

She describes this body of work as “elemental, archetypal and numinous.” The elements are signified through color and symbology, and the occasional glimpse of the galaxies through the eyes or mouth of a beast. The archetypes are used as a standard in which to deviate from, and often the beasts represent two opposing archetypes in a gesture of duality. The numinous part — or the spirituality behind the pieces — is a singular experience that each person must have on their own. It’s also where bunny M found the inspiration.

In her studio, bunny M meets these spritely creatures at each canvas and brings them into being with love and care in each individual brush stroke. And these paintings have a lot of brushstrokes. Aside from the layers of colors that make up the fur and backgrounds, in each painting there are copious amounts of bonded glitter (which is also applied with a brush).

Feel free to touch the glitter on these paintings — it’s nearly bulletproof. Some of bunny M’s pieces on the streets in Denver have survived more than one winter and still hold an inch of glitter to their skins. It’s a proprietary blend that she created and it adds a kinetic quality to her paintings that bring the beasts off the wall (or canvas) and into our realm physically.

The frames or canvases are just as important as the paintings. In beasts of burden, the choice of surfaces ranges from a primed tarp to reclaimed Chicago bricks to heavyweight board. When a frame is used, it’s vintage and it’s a permanent part of the work, a home for the beast to rest in.

One of the hallmarks of bunny M’s creations is the hidden messages inside the pelts and backgrounds of her subjects. Some can be easily traced, like the appearance of the tag that reads “bunny M” in a specific font. Paying close attention to where the tag is placed — attached to the ear, worn as a necklace, or simply printed onto the background, for instance — will lead you on a journey to discover how each being acknowledges ownership. “I don’t force anything upon a work that it doesn’t request or agree with. I think the ear tag is something some beasts wanted in order to show a solidarity with or a firm incorporation into the spirit of what M is,” she commented, then added, “or maybe they were just playing with me, acknowledging they are owned by me as much as I am owned by them.”

Other messages are more elusive and secretive, like the use of repeated symbols throughout beasts of burden. bunny M uses a star to represent the sun, a crescent moon to symbolize the moon and a heart to symbolize Venus. Some of these efforts are intentional, while others are a result of bunny M’s interactions with the beings in the paintings. Although her work is heavy in symbolism and iconography, she admits that some of the “hidden messages” people find in her work are as much a surprise to her as they are to the viewer who discovers them. “These details can be viewed differently or even show themselves in certain light. Because of this, the longer one spends time with these paintings the more you would notice or more would be unveiled to you, and I believe this is the painting sharing its animating spirit with you.”

Since part of the joy of bunny M’s art is in the discovery of these elusive tokens of her creativity, you’ll have to look at each piece on your own and get lost (or found) in the enchanting spirit.

Don’t be surprised if, by the end of your visit to Leon, you feel like I did — as if you should say good-bye to the beasts. They are, after all, meant to “surprise, enchant, and ultimately, uplift” according to bunny M. And even when one of them is named “dead dead” there’s a childlike wonder that forms and grows as you spend time looking at them, leading to an inexplicable bond. bunny M does not take all the credit for creating these beasts, she believes in the power of their own personalities. But without her expertly crafted and loving representation of them, they might not seem so endearing. 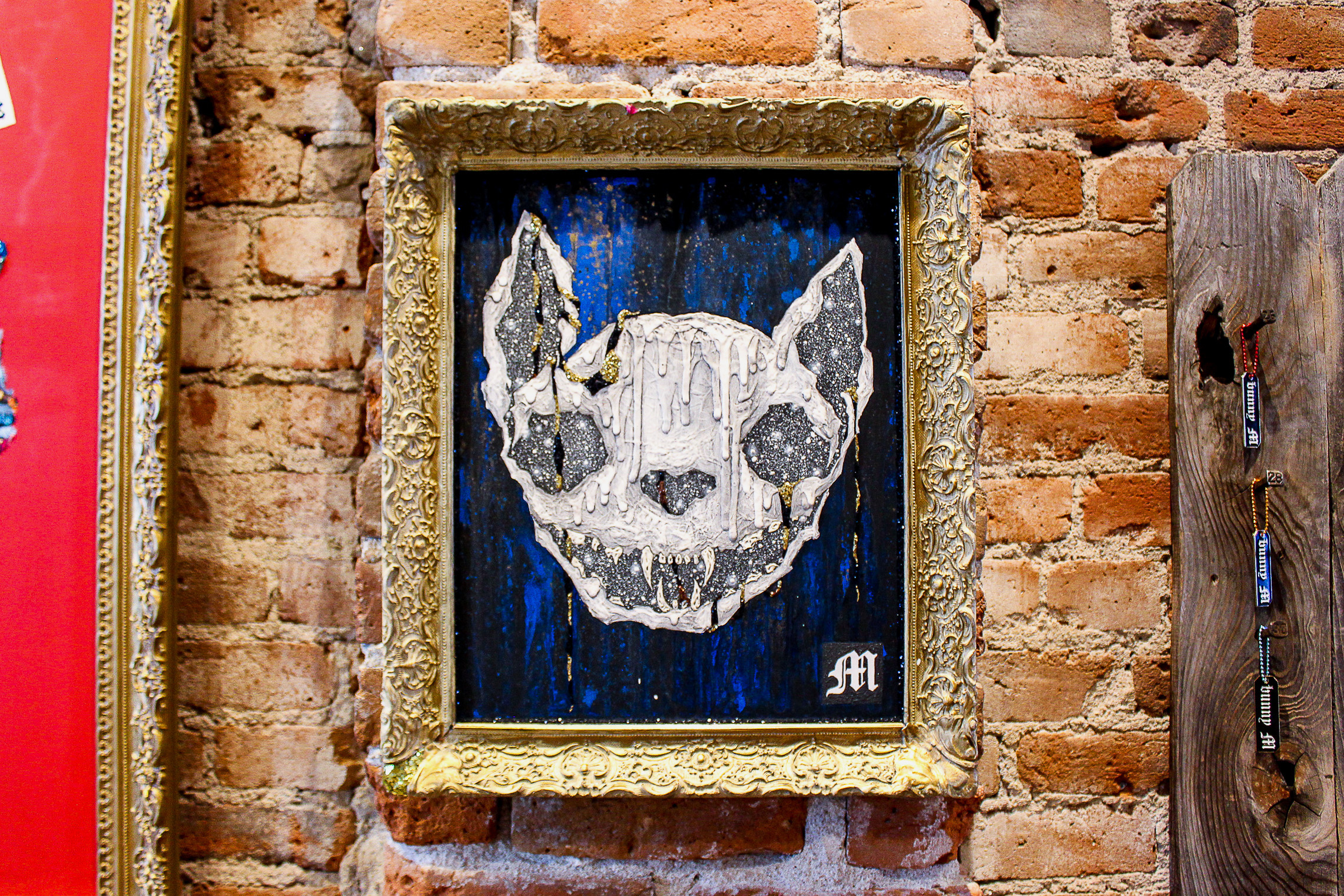 beasts of burden is on view at Leon Gallery, 1112 E. 17th Avenue, until December 21, 2019. For more information and for hours of operation, visit Leon’s website.