All Photography by MJ Kampe

Review – The Chainsmokers Are Larger Than Life

In recent years, music festivals have expanded outside of the EDM scene to celebrate music of all genres in all kinds of settings. Festivals like Lollapalooza, Voodoo Music Festival and last year’s Grandoozy have become part of a growing trend of festivals that blur genre boundaries by booking headlining artists that may not seem to mesh. The Chainsmokers’ “World War Joy” tour followed this trend by bringing a unique experience to cities across the country — including a stop in Denver on Tuesday night.

Joined by rising pop star Lennon Stella, and pop-punk revivalists 5 Seconds of Summer, the tour lineup is not exactly what you’d expect from the DJ duo. However, with all three musical acts boasting mainstream success, it shouldn’t come as a total surprise either. Combining influences from a variety of genres, the tour highlights The Chainsmokers’ understanding of music and their ability to produce an experience that no other DJs could create.

After their explosive performance at the Pepsi Center on Tuesday night, which served as a perfect example of creating a show that highlights the best of different genres, the only question we have is when will The Chainsmokers start their own festival, and where can we buy tickets? 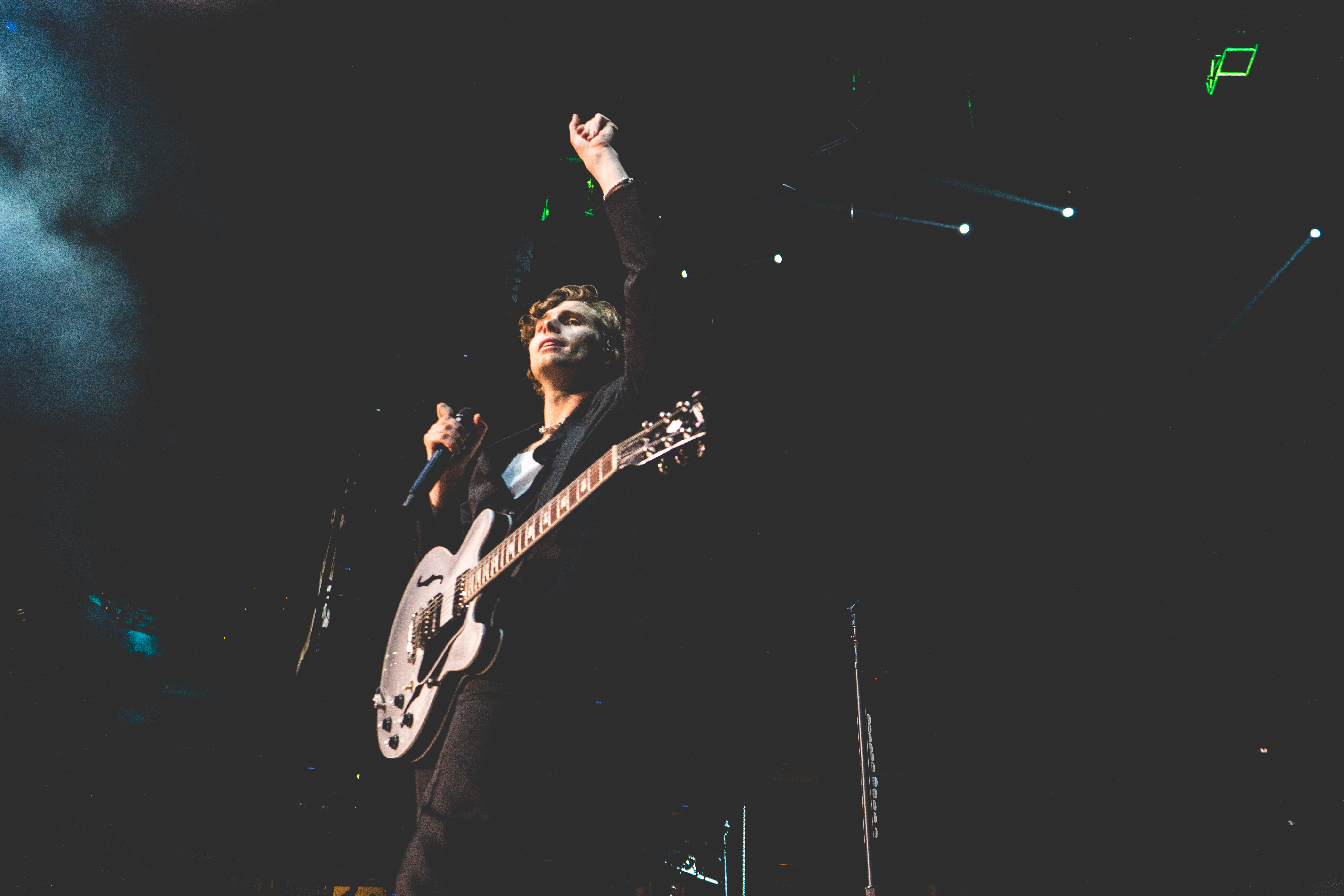 Heavily influenced by the punk music of the late ’90s and early 2000s, opener 5 Seconds of Summer might not be the first band that comes to mind when you think of a Chainsmokers’ tour. However, if you’ve ever seen the Australian quartet perform live, then you’ll know that the group delivers a high-energy performance no matter what the scenario — making them a perfect opener for any concert. Starting their set with one of their earliest hits, “She Looks So Perfect,” the band kicked off their performance with an engaging explosion of energy that never slowed down.

Showcasing hits from throughout their career, the alternative group energized the crowd — and it was clear that they were having a great time on stage as well. Fans in the audience waved signs wishing guitarist Michael Clifford a happy birthday. The birthday celebration reached its zenith when the crowd sang Clifford a happy birthday, before fulfilling his wish of getting everyone out of their seats to dance. 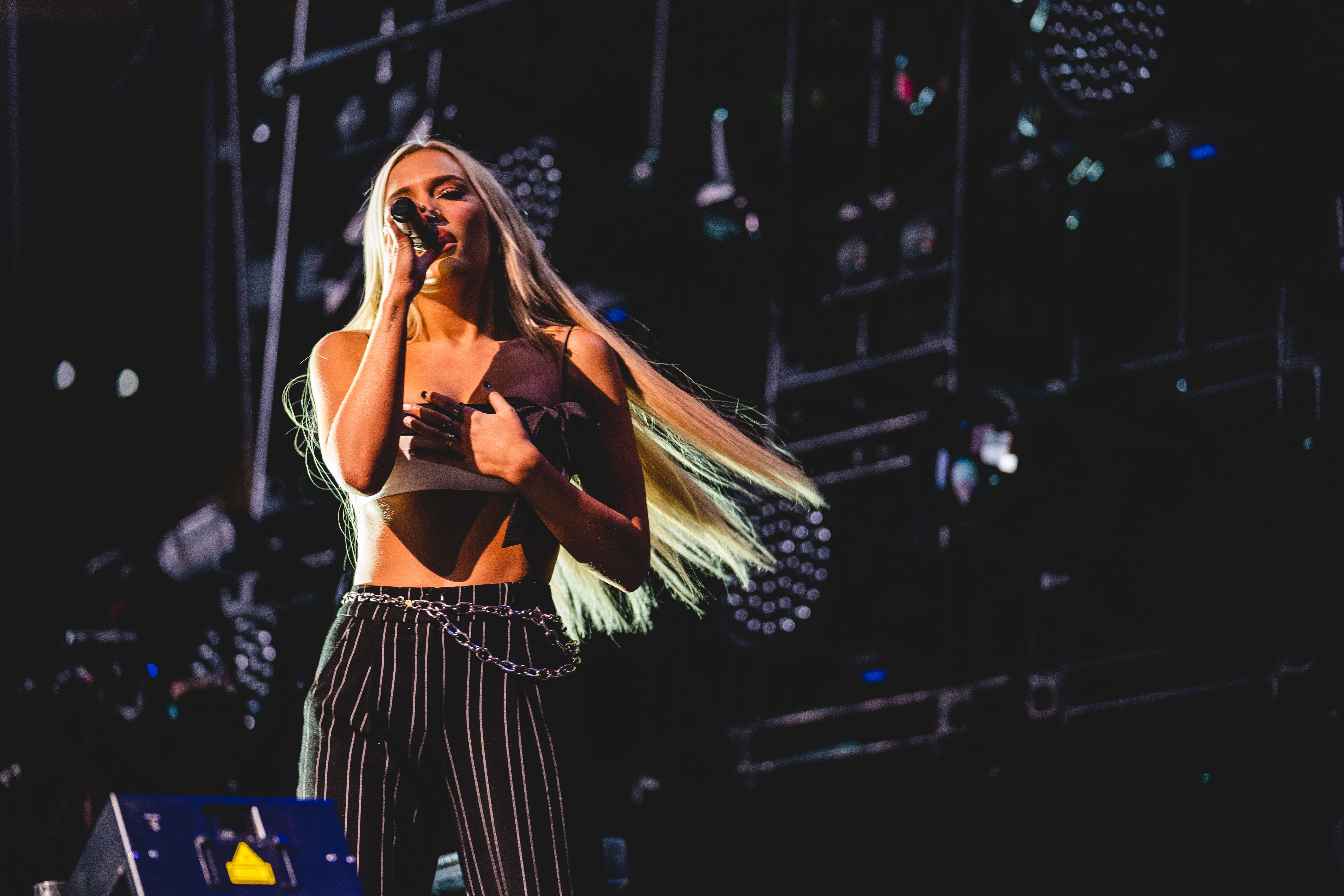 At the time that their set ended, it was hard to imagine that the crowd could be any more energized after dancing their hearts out. With time to finally sit down, concert-goers looking around the venue no doubt noticed the array of cameras and microphones strategically placed throughout the venue. Part of an effort to preserve the highlights of the tour, the event was filmed for Vevo — adding an extra layer of excitement to the evening.

As the crew finalized the stage setup and the lights dimmed in preparation of the main act, the anticipation of what was to come electrified the crowd. The buzz of the fan’s conversation grew to a deafening roar as The Chainsmokers walked out onto the stage, flares held flaming over their heads as they found their places at center stage.

Their enthusiastic stage presence somehow managed to outshine the crowd’s excitement for the evening as the DJ’s launched into their first song, joined by opener Lennon Stella. With the entire Pepsi Center on their feet singing along, it was immediately clear that the evening would be nothing short of a party. 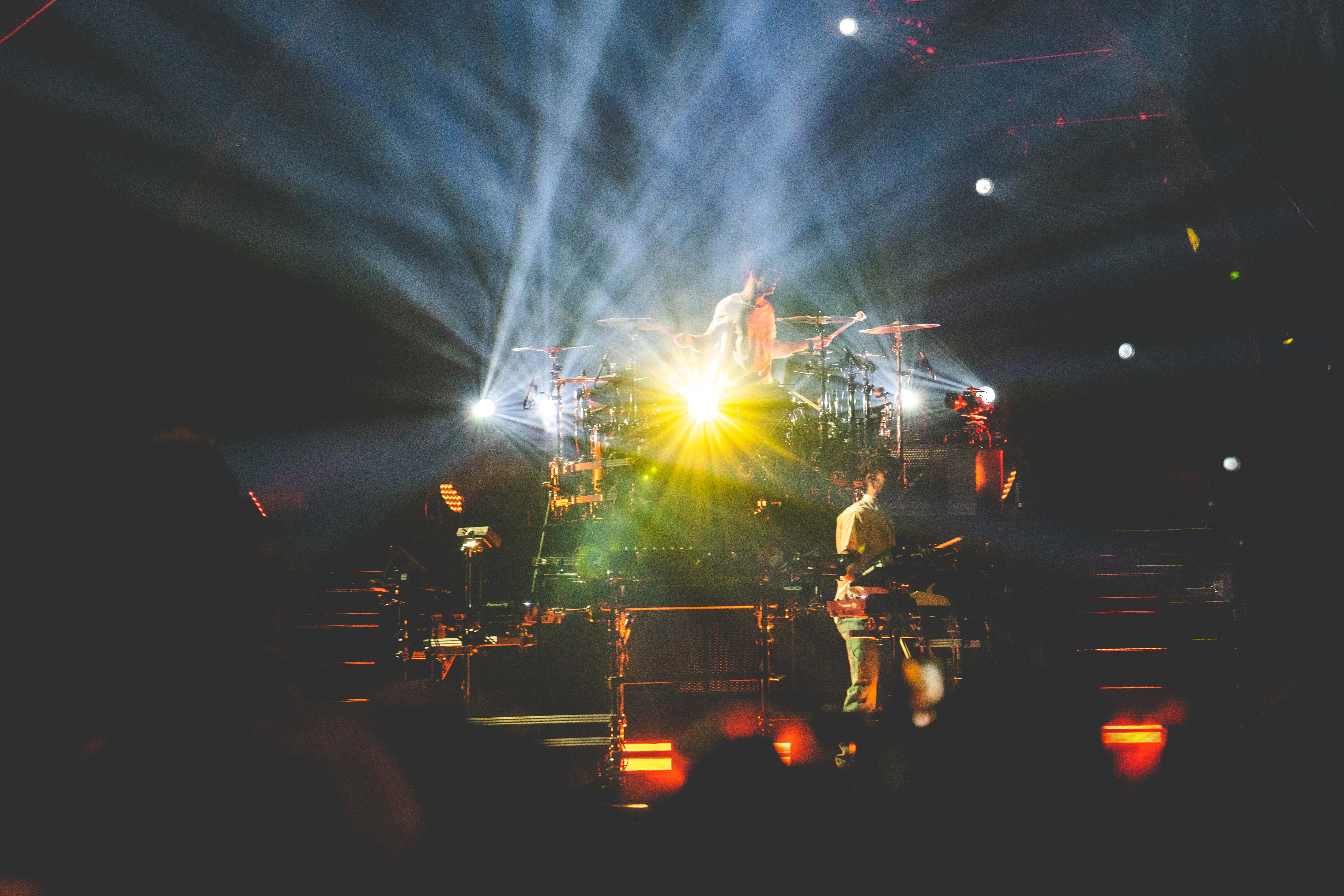 Taking time to address the crowd directly, The Chainsmokers made sure to express their love for Denver. Commenting that they knew the city would be the best crowd of the tour, they made sure to let their fans know that they specifically chose their Denver date of the tour for filming solely because fans in The Mile High City know how to have a good time.

Filling the arena with flames, fireworks and a laser light show fit for a festival, The Chainsmokers performance was one of the most highly produced show that the venue has seen all year. While that might feel like trying too hard for some bands, for the DJ duo on stage it hardly felt like enough to keep up with their performance.

Racing from one end of the stage to another and performing from an elevated catwalk above the stage, The Chainsmokers were out for a good time and their energy was infectious. In fact, they had so much fun on stage that they couldn’t stop themselves from inviting 5 Seconds of Summer back on stage to share the good times for a performance of “Who Do You Love.” 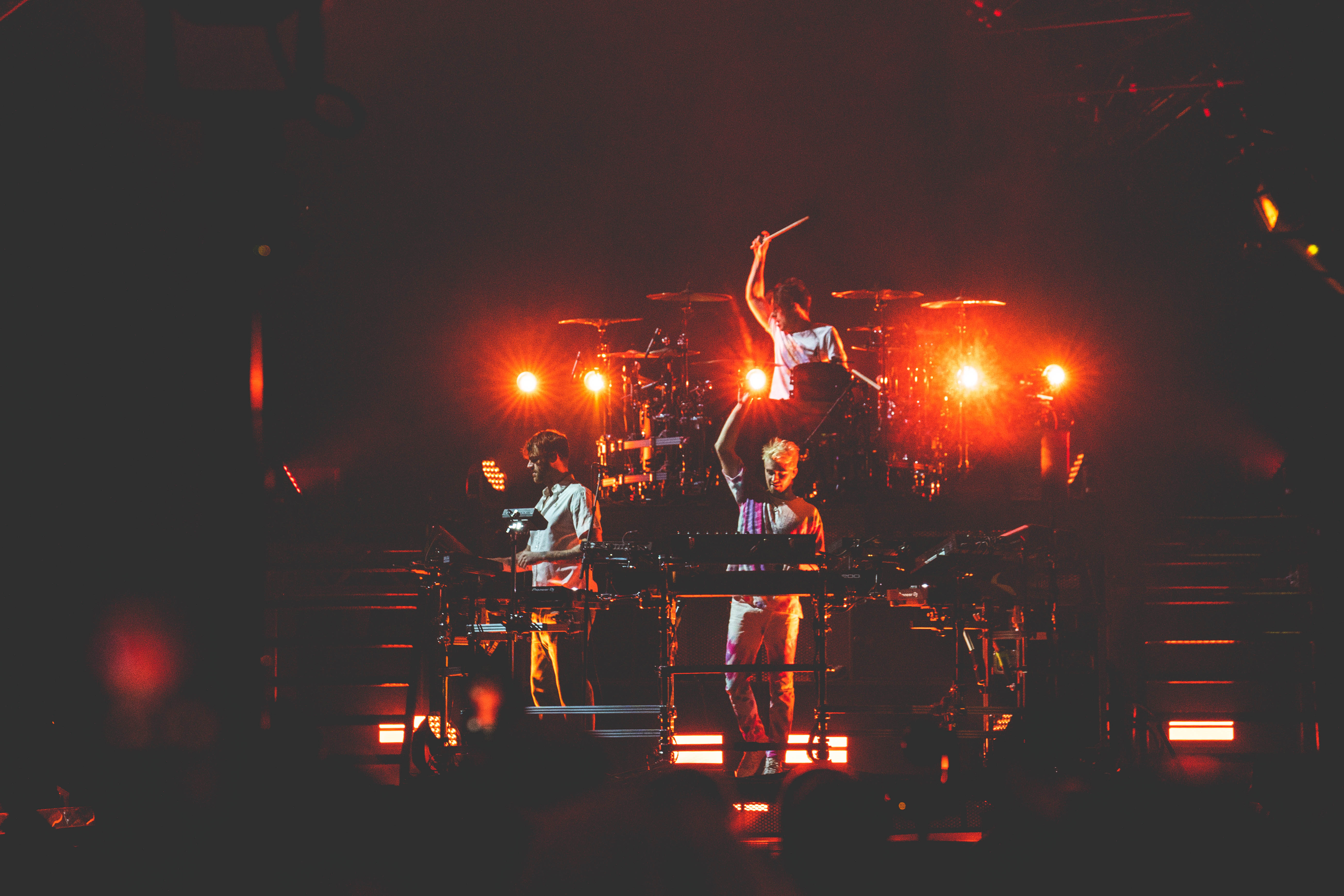 As a spherical cage descended from the ceiling, it was clear that The Chainsmokers had a few tricks up their sleeve. With flames ablaze on stage and fireworks exploding behind the DJs, motorcycles raced out from behind the stage for the second time that evening. Entering the sphere they raced in circles inside the sphere, much to the delight of the crowd.

Just when it seemed that there was nowhere else to go to elevate the show, the Chainsmokers went up. Climbing a staircase that seemed to go all the way to heaven, Andrew Taggert proved to be fearless as he grooved high above the stage. Returning to the safety of the ground, the duo closed out the evening after two full hours of performing with their hit “Closer.” 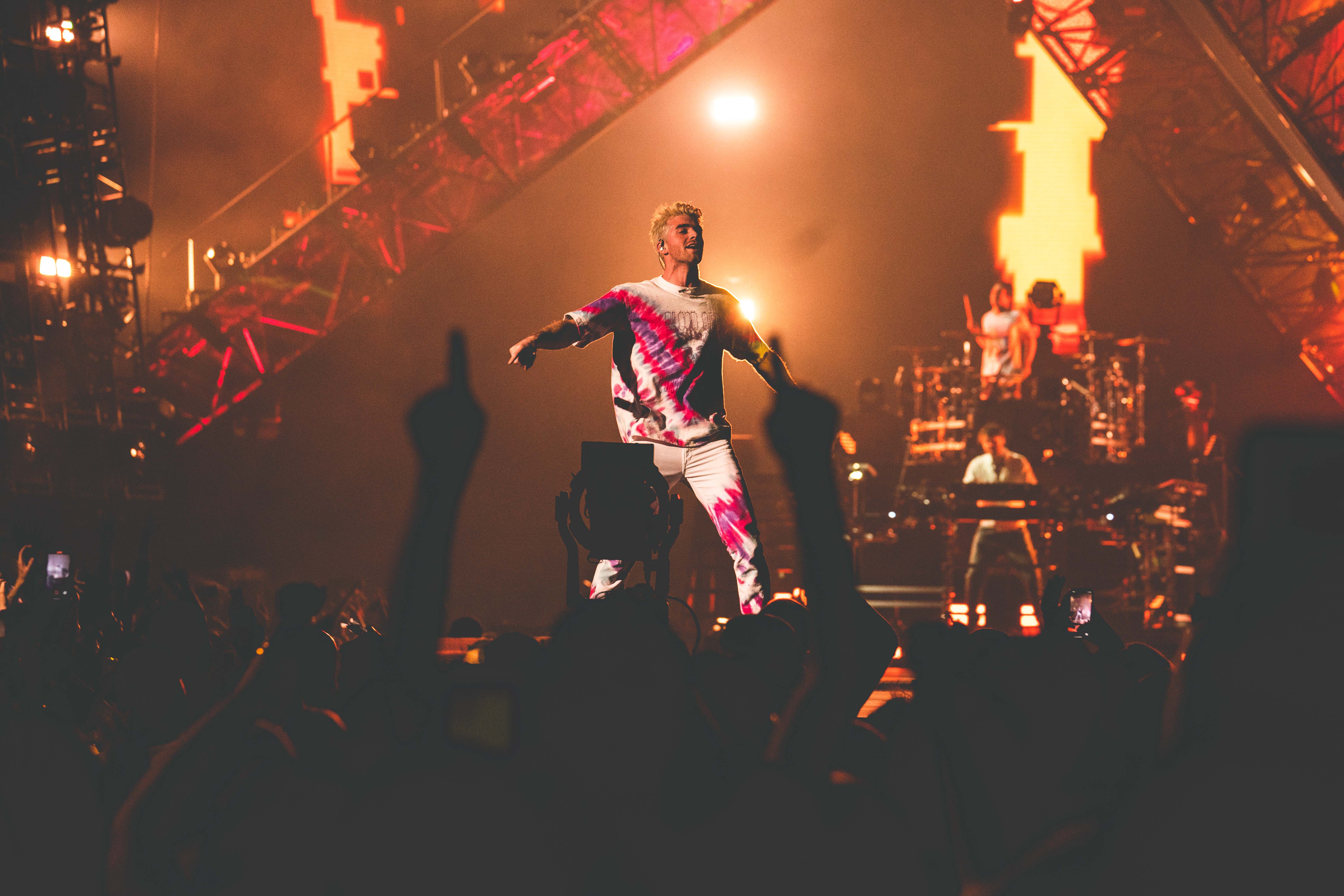 Perhaps it just hit close to home, but something about the lyrics of the final song referencing Boulder felt a little special when sang live in Denver. After losing a dance-off to a fan from the audience, doing tequila shots on stage and throwing quite possibly one of the best parties of the year, it was hard to accept that the night had finally come to an end. Fortunately for Denver, the DJs promised to return to the city anytime we need them.

All photography by MJ Kampe. View the full gallery here.