The aptly named Airplane Restaurant located in Colorado Springs features a fully intact Boeing KC-97 tanker that was built in 1953. This decommissioned plane not only adds an element of surprise to the restaurant, but it also provides a rich history of aviation.

This US Air Force KC-97 was once used to refuel numerous aircrafts around the world. It is one of the largest piston aircrafts ever built by Boeing sitting at 110 feet long. After the plane was decommissioned, it had been stripped and used for parts at the Fort Worth Airforce Base in Texas. When pilot and restauranteur Steve Kanatzar bought it, most of the cockpit had been stripped. Luckily, the original engines and fueling tanks were still intact. 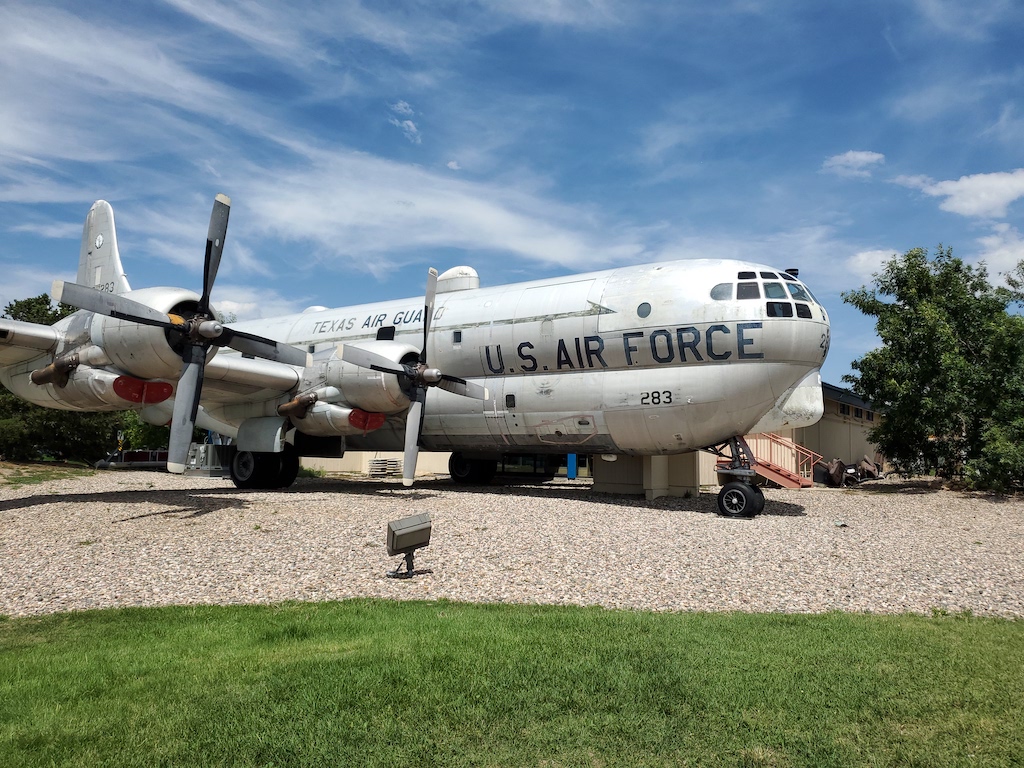 Kanatzar decided to make his lifelong dream of repurposing a historical plane into a fine dining restaurant come true. It took eight semi-trailers to drive this Boeing from Texas to Colorado Springs and a decade to turn it into the one and only airplane restaurant in Colorado.

In May 2002, the restaurant finally opened with 42 dining seats inside the fuselage of the actual plane and 250 seats in the brick and mortar connected by a wing of the plane.

This restaurant is not only an attraction for local families but also for many pilots and astronauts that visit the area. The plane adds an immense amount of flair to the Airplane Restaurant, but Kanatzar wanted there to be an educational element that really speaks to the history of flight. The amount of memorabilia posted throughout the restaurant is similar to that of an aviation museum. The various signed pictures of famous airmen and airwomen throughout time celebrate the journey through flight.

Some of the most notable mementos is a signed picture of Amelia Earhart, the first female aviator to fly solo across the Atlantic Ocean and an original picture of the first nuclear-powered airplane. It was in those 10 years before opening that Kanatzar collected all the autographed pictures, artifacts and various displays to embellish his restaurant.

His love and passion for both flying and cooking has created a unique dining experience for the community surrounding the Airplane Restaurant. When Kanatzar isn’t crafting American fare for the restaurant, he is flying private airplanes and gliders. He had owned and operated many restaurants in the past, but this conception really became his passion project. The past experience he had in fine dining restaurants is echoed in the meals served at the Airplane Restaurant. The menu is chock-full of fresh fish, locally sourced steak and classic American dishes.

Only open for lunch and dinner, Kanatzar’s take on a classic Rueben sandwich comes three different ways. The Rueben Von Crashed ($12.99-$14.99) is either corned beef, corned bison or turkey topped with sauerkraut, melted Swiss cheese and thousand island dressing served on fresh rye bread. The Blackened Salmon Caesar ($14.99) is Fresh North Atlantic salmon, blackened and served over fresh romaine tossed in creamy Caesar dressing topped with shredded salty parmesan. The Buffalo Steak ($26.99) is seasoned and flame broiled to order with a side of fresh sautéed vegetables, soup or salad and choice of either rice pilaf, coleslaw or mashed/baked potatoes.

The classic American fare resembles a simplicity that would have been standard in the ’40s and ’50s. The history of the Boeing circulates throughout the menu — traditional and comfortably appetizing.

Since there are limited seats for dining in the actual body of the plane, it is recommended to make reservations in advance. However, if a larger party sits in the building, there is still freedom to walk past the wing of the plane and into the cockpit. It’s not uncommon to see a lot of kids who are dining with their families, “fly an airplane 100 times throughout dinner,” Kanatzar said. There’s no other restaurant in Colorado that offers this experience through aviation.

Take a trip down south to dine in a historic US Air Force Boeing and put yourself in the shoes of a 1950s pilot by visiting the cockpit between bites.

All Photography Courtesy Of The Airplane Restaurant