Walking into a room of musicians setting up their practice space feels just as intimidating and busy as newsrooms on the brink of breaking a story. Breathing feels like it’s taking up space and there’s a certain surface-level wariness behind the eyes of everyone involved. This environment quickly changes moods when you realize that everything you’re watching, this kinetic friction between all of the moving parts, is a minor part of a whole production coming together. — everyone’s excited, everyone’s present.

The rehearsal at Youth on Record‘s headquarters was for our latest endeavor, 303 Cover Challenge LIVE.  This event is all about highlighting the local music scene by showcasing musicians talents when presented with national songs people know and love.

Los Mocochetes, serving as the event’s house band, set up their instruments while the guest singers sat on the sidelines, mouthing the words for their performances, eyeing the lyrics on their respective iPhone’s. A mix of genres and people, Cisco the Nomad wearing his personality as big as his hair while Neoma and Bailey Elora talked excitedly about one of the covers Elora would tackle later on in the night. Each piece, a part of a world that in most other circumstances wouldn’t mesh, was strangely coming together. 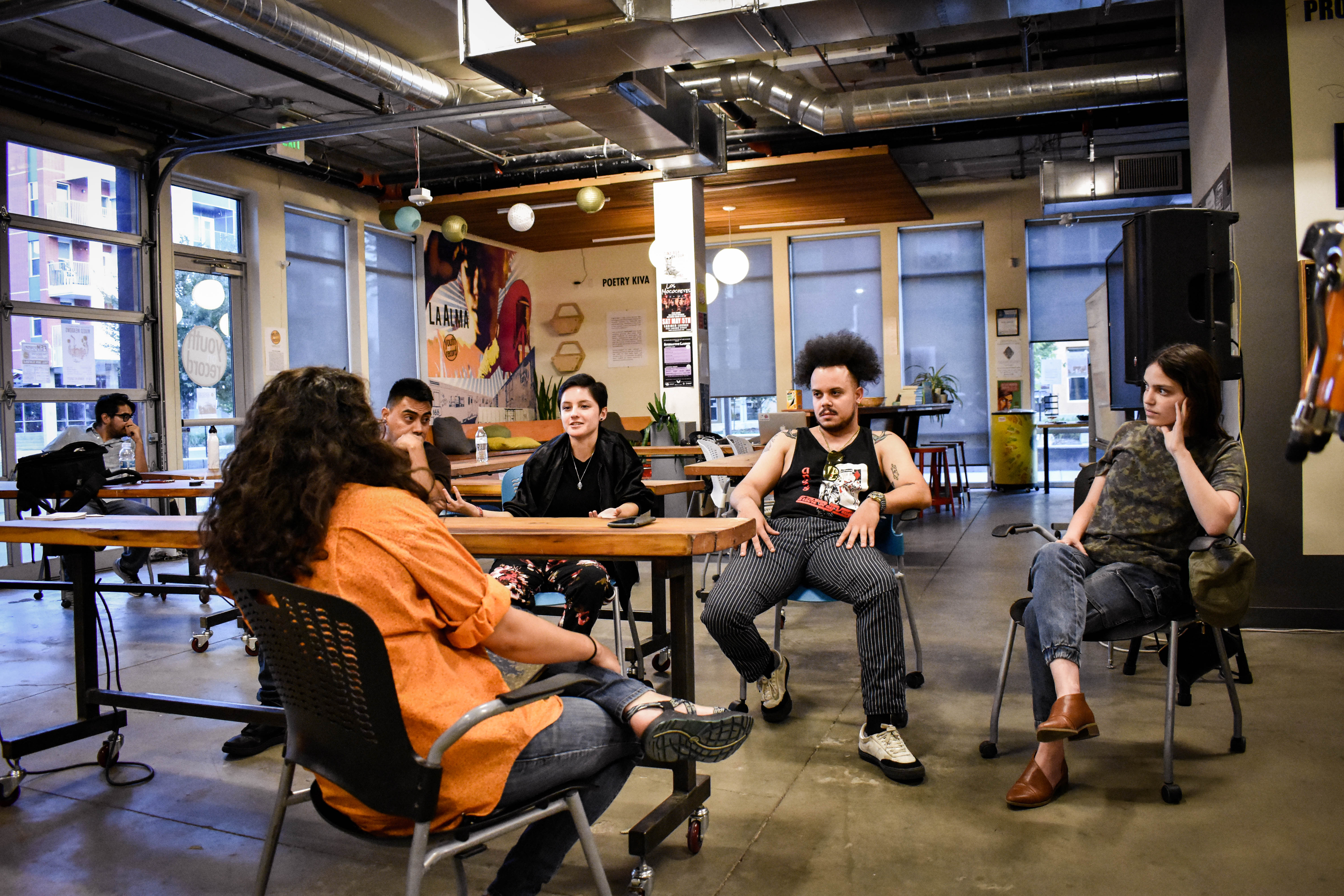 Cisco’s a rapper so he has little experience with a full band. At one point during a practice run of one of his songs he turns over excitedly to Los Mocochetes and exclaims “having a band is fucking amazing!” Neoma is newer to the scene, having moved here from Ecuador only a year ago. She’s singing two Spanish covers and the crossover is met with significant enthusiasm from everyone in the room. Los Mocochetes are a Latin band, although pigeonholing them in that genre takes away from the musicianship they’ve expanded upon since their inception. They often tackle covers during their headlining shows, pulling from their roots in order to give songs a spin you wouldn’t always expect. This event is no exception.

Elora pulled up a music video of the song she’s singing, Los Mocochetes improvised bass lines suggesting a call and response during the chorus — it’s electric. The rendition is close enough to make everyone in the room sing along but different enough to bring in bongos on a song produced mostly by machines.

The rehearsal was the first of many, with the event two weeks away. For some this is the first time meeting each other. The local scene is small, but often everyone sticks to who and what they know. The rehearsal broke that comfort. Everyone’s enthusiasm picked up looking at the setlist that spanned from Nirvana to Lizzo. It’s a tight-lipped affair for good reason. The songs in store are worth the wait. 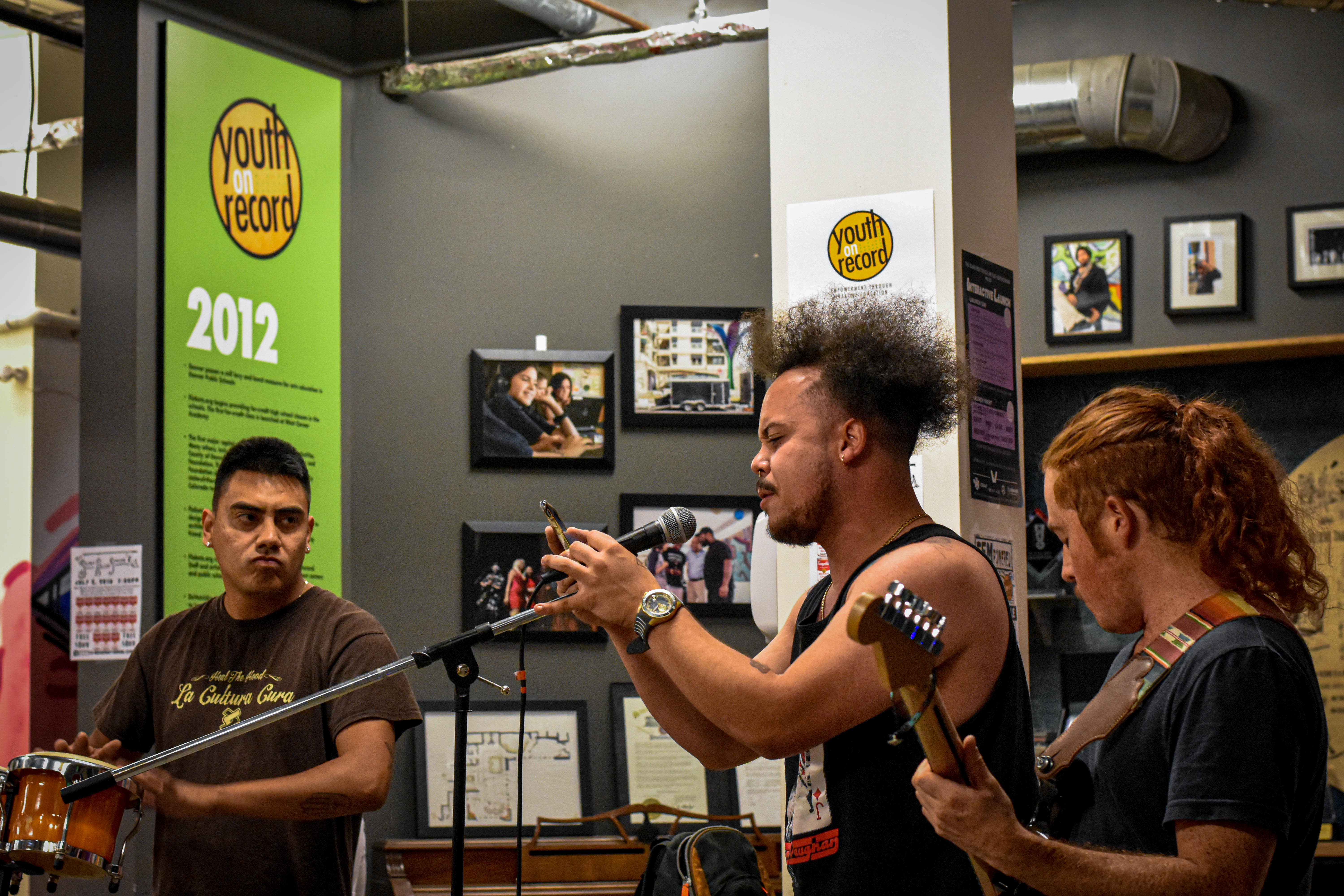 I went over to Los Mocochetes at one point during the night and ask them what they’re most excited about for in the performance. Jozer Guerrero leads the question back to the room of musicians, talking about how their band feels like a “band of grandpas,” the older generation of Denver music supporting this newer movement of sound and collaboration on their backs just like previous bands did for them when they entered the scene. For a band that’s made a name for themselves, Los Mocochetes want the music world to focus on someone else. That may be a leading reason why everyone jumps at an opportunity to be on their stage. It was a sweet moment to realize that this is all a cycle of support, that everyone in that room is rooting for one another.

At the end of the day, they just want to put on a good show.