There aren’t many artists who could sell out stadiums in record time and shatter records for ticket sales in multiple states all with one tour. However, that’s exactly what country music icon Garth Brooks has done with “The Stadium Tour,” and his show in Denver Saturday night was no exception. The show marked an unmatched number of ticket sales for the venue, and with more than 80,000 tickets sold, it stands as the highest ticketed event in the history of the Mile High Stadium – but what else could be expected from one of the most iconic musicians in the history of country music?

Perhaps this level of success is the reason why I couldn’t stop myself from letting Brooks know which song I was looking forward to hearing most when I talked with him at a press conference on Friday afternoon. And, as a fan who was raised on his music, it’s hopefully easy to understand why I quietly lost my shit when Brooks recounted our brief conversation for the packed stadium in the middle of his show Saturday night – and when I heard him say my name in front of the 84,000 fans in the Mile High stadium as he dedicated a song to me, the only thought in my mind was “is this really happening?” A thought which was immediately followed by the realization that giving this kind of care to fans is exactly how Brooks has sustained a career spanning generations, despite a more than 15-year hiatus that he returned from only a few short years ago. 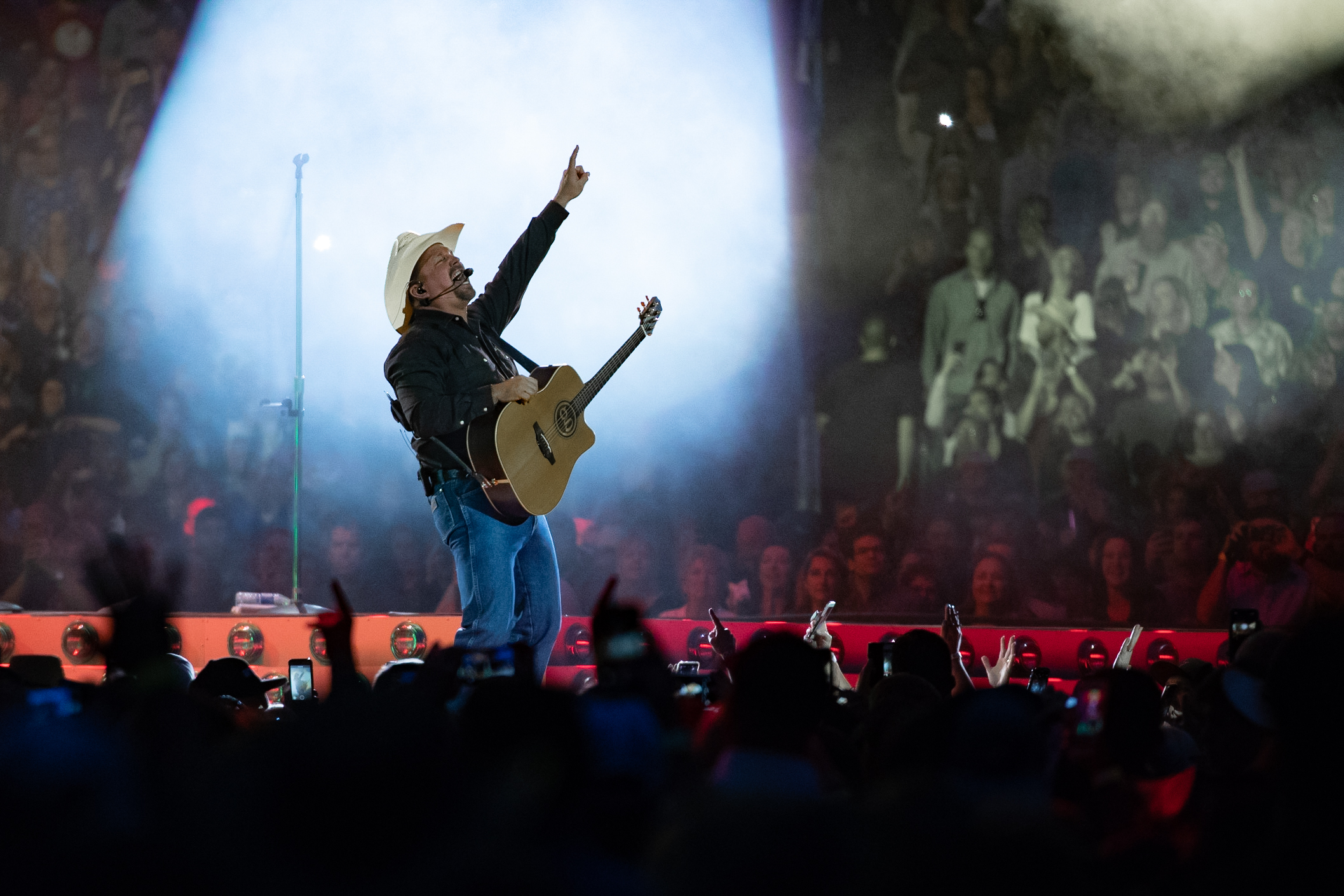 While I may have been the only fan named during Brooks’ performance Saturday night, I was far from the only fan that Brooks took notice of. He ran across the stage throughout the duration of his nearly three-hour set, giving fans throughout the stadium plenty of opportunities to see him. As he danced across the stage with a smile on his face, it was clear that there is no place he would rather be. “Of all my time in Denver, Colorado this has been my favorite,” said Brooks. “This is probably the greatest night of my fricken career.”

While a crowd of more than 80,000 is unbelievably massive, Brooks has a special talent for making even a stadium feel like an intimate evening. He spent time on each side of the stage, giving special attention to each section of the audience – making them feel like the verse he sang to them was just for them. He even made sure to acknowledge fans ferociously waving him down, sometimes making a heart with his hand in response to a few excited attendees. 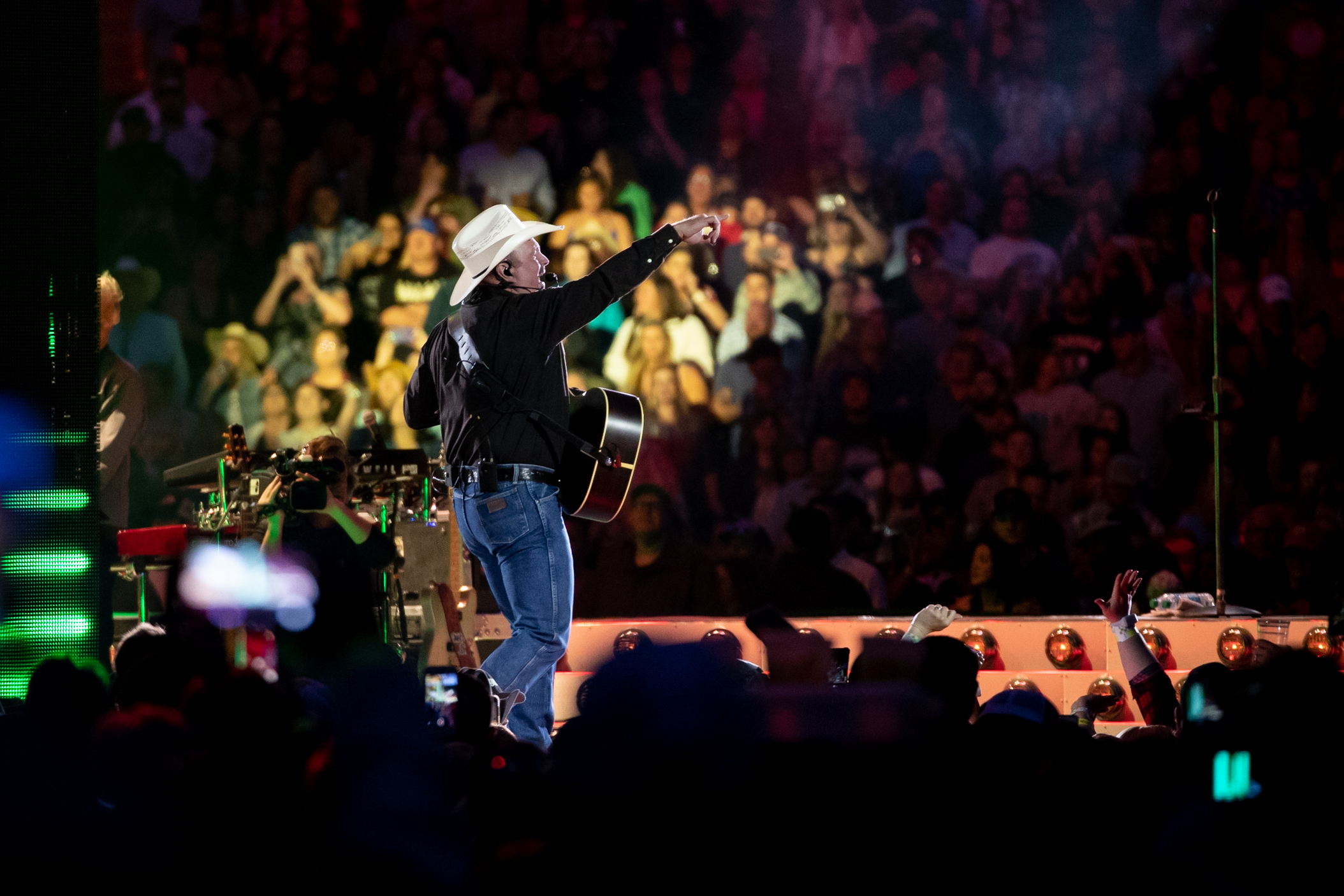 It wasn’t just the fans who were excited to be in the stadium Saturday night – Brooks was excited himself.  Throughout the evening he told fans how great of an audience they were and how excited he was to be there with them for yet another night of music – often applauding the audience in return after singing some of the artists most noteworthy choruses, including that of “Friends in Low Places.” With all of his excitement, it was clear that Denver is a special city for Brooks.  “It was Denver,” said Brooks, “that took us in like a child in its own way early in my career.”

As for the surprises Brooks promised at the press conference Friday afternoon? There were a few. The first being the live recording, which fans may not have known about before the show. He recorded his hit, “Much Too Young (To Feel This Damn Old)” for his upcoming live album.  In addition to audio recording for his upcoming album, Brooks recorded video of the evening as well. There was also a special guest invited onto the stage –Chris Leuizinger, the band member that plays with Brooks on all of his records. Leuizinger is also the man behind some of Brooks’ most memorable guitar solos, including the solo in “Friends in Low Places,” which he played with Brooks on stage Saturday night. 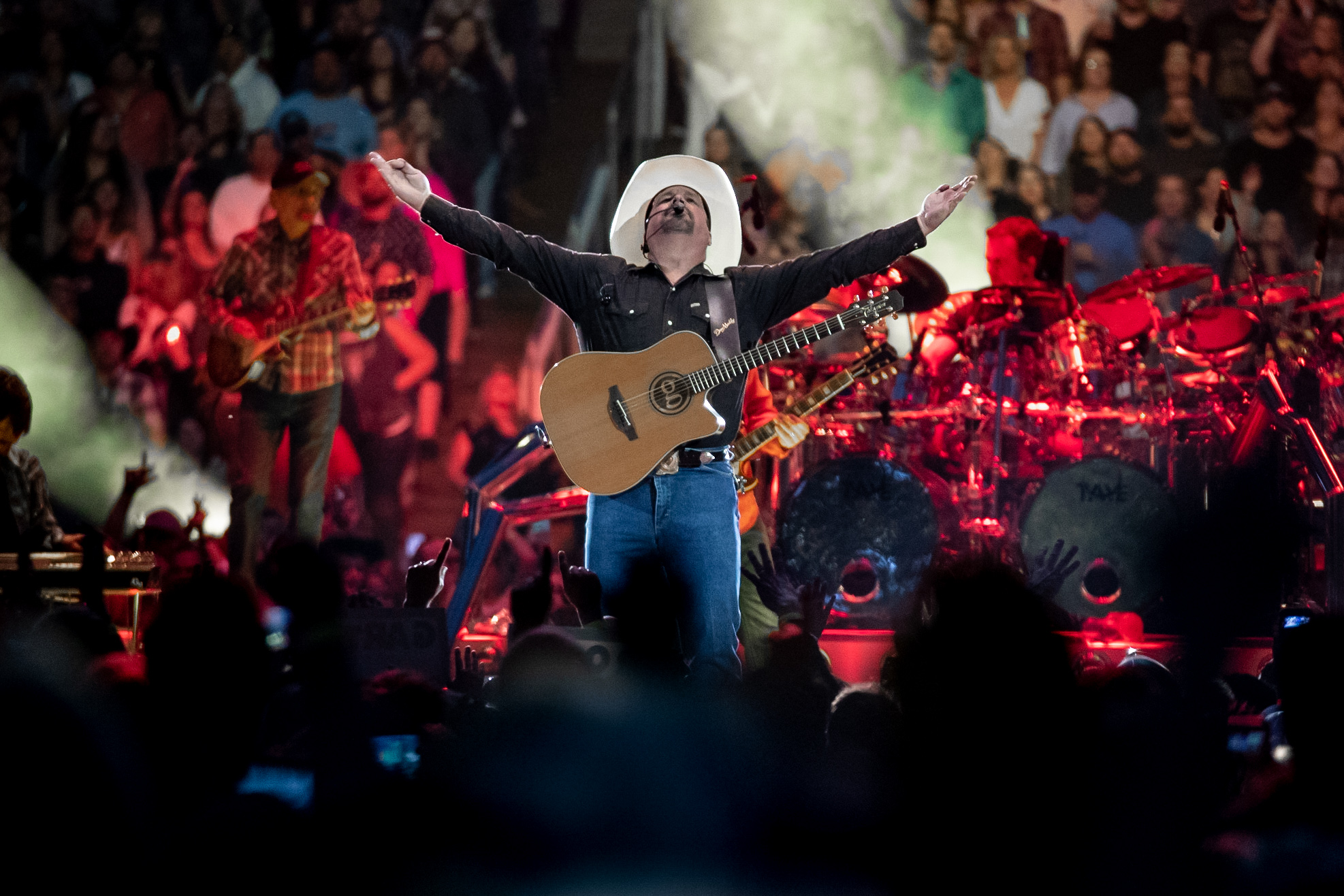 However, perhaps the most exciting surprise of the evening was floating above the fans. In the upper halo of the stadium, 23,000 fans were equipped with small flashlights that they used to light up the night. The lights changed color and pulsed along with Brooks’ music in an extravagantly orchestrated light show – including a special rainbow light orchestration for the performance of “We Shall Be Free,” and a fiery combination of reds and oranges flickering throughout the top half of the stadium for the closing song of the evening, “Standing Outside the Fire.”

Ultimately, Brooks made the iconic stadium feel like an intimate evening. Sadly, after nearly three hours, even Brooks’ high-energy performance had to come to an end. After playing all of his hits and taking plenty of requests from fans, Brooks gathered his band together and took one final bow before departing the stage for the evening. It was truly a night that the Mile High City will never forget.