Denver Pop Culture Con 2019 descended over Denver this past weekend at the Colorado Convention Center for a three-day event that was dedicated to all things nerdy for the eighth year in a row. 303 Magazine was able to able to catch a glimpse of what this year’s adventures offered.

The con, which was formerly known as Denver Comic Con, was created by Denver’s Pop Culture Classroom, a nonprofit organization whose mission is to promote literacy and education by using comic books and other pop culture fun to entertain and enhance learning. After a legal battle with San Diego’s quest to own the Comic Con name, the local rendition decided to change its moniker, but not its spirit. Tara Hubner, the communication manager of Pop Culture Classroom gave a bit of insight into how the con’s new name reflects its inclusive nature for all things pop culture.

Hubner said, “You don’t have to be a comics enthusiast to come to our show. You just have to have a love of some aspect of popular culture, whether that’s the Avengers, whether that’s Harry Potter, whether that’s romance authors or comics… all of these things are a part of our show. You may not be interested in getting a celebrity autograph, but we have 800 hours of panels and programming that all focus on pop culture that you can attend. [There] really is something for everyone. And it’s a really good and safe place to just be yourself.”

Each year the con has grown in numbers and has upped the ante with what it presents. This year it was filled with programming that included author panels, celebrity Q&As, Pop Culture Classroom workshops and more.

The con also expanded its reach by partnering with Blizzard Entertainment – the company that owns games such as World of Warcraft, Overwatch and Diablo. The company provided giveaways throughout the weekend that really sweetened the deal for con-goers. 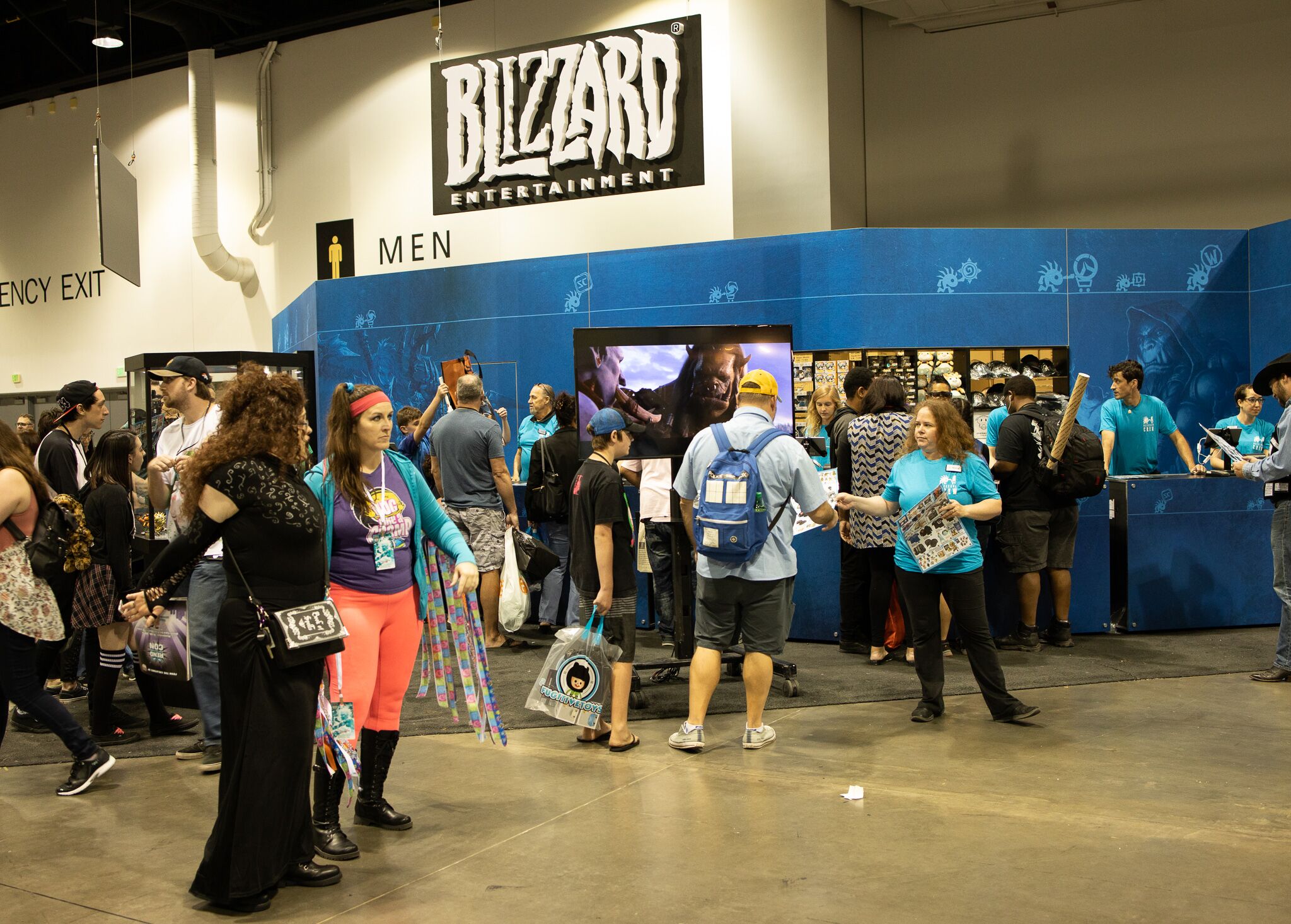 This year the Denver Pop Culture Con also really honed in on author panels and local spotlight panels giving attendees a chance to meet Colorado authors and creators while also enjoying the celebrities they know and love. The panels ranged from getting a chance to see Christopher Lloyd and Tom Wilson from Back to the Future to hearing from multiple women authors about writing in the #MeToo Movement.

Writing Fantasy in the #MeToo Era 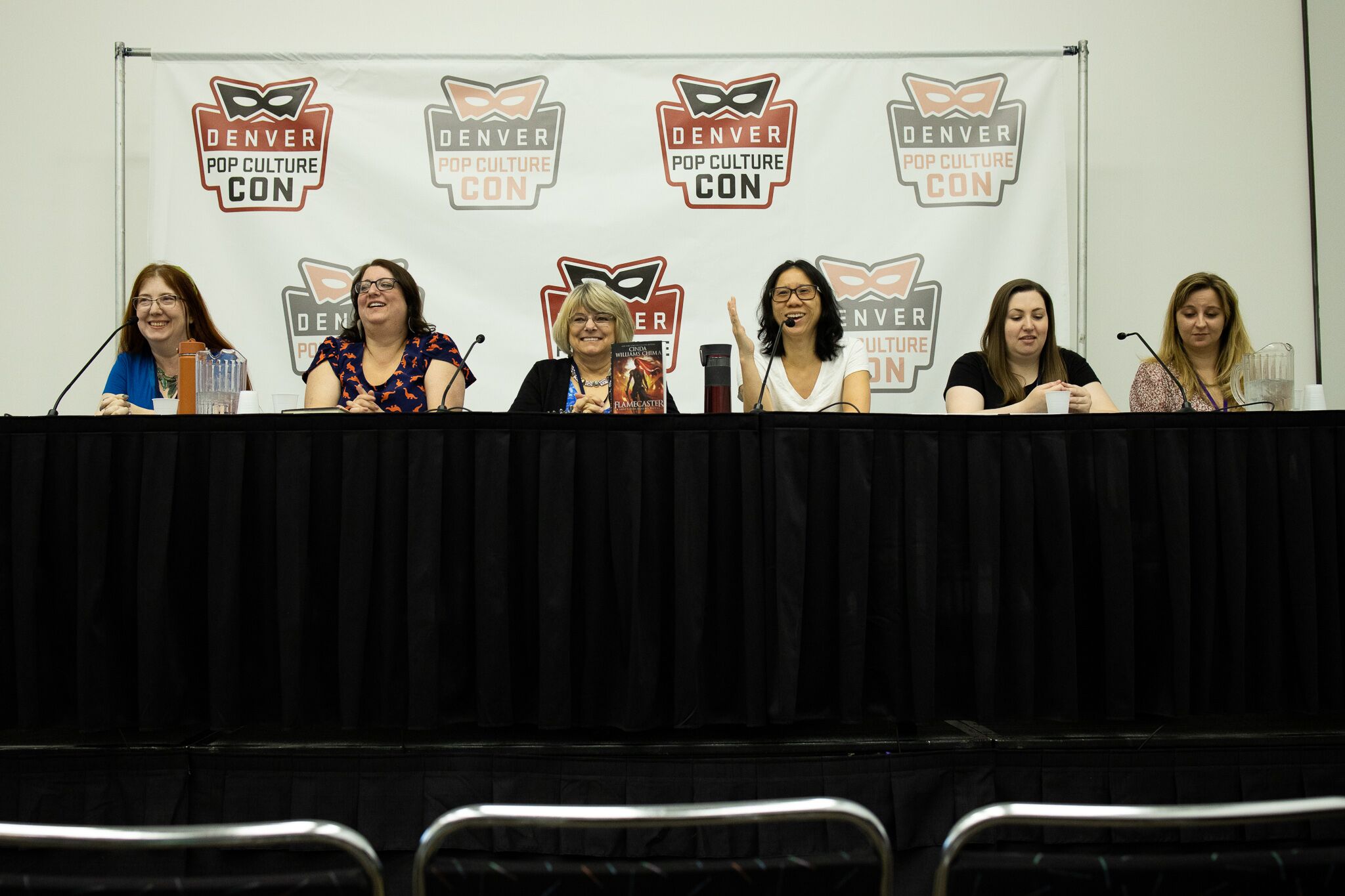 On the first day on Denver Pop Culture Con, Author C.R. Richards moderated the panel “Writing Fantasy in the #MeToo Era.” The panel was filled with a line up of women authors that spoke about the difficulties that they face writing within the movement and how they combat stereotypes while standing up for the morals they care about. The authors touched on topics such as being sensitive of sexual assault scenes in books (or if they should be included at all in fantasy/fiction) or that female villains don’t need to be sexy to be evil and how certain popular works, like Game of Thrones, could have improved their narratives to be more appropriate and more realistic in regards to the #MeToo Movement.

Author Cinda Williams Chima spoke about how she takes the time to look at different angles and tries to step into a different gender with her characters from time to time.  “I was trying to begin a book and I just couldn’t decide what they [were] wanting. The important character was nailed with they were, where they’ve been. So I wrote certain chapters with that character as a female and then I decided, no, I really think, I’m going to use a male here. And it was shocking to me how that changed dialogue, actions, conversation, things that I was not even aware that I was modifying with the genders. So try that sometime, write a viewpoint with the one gender and then change it and see what that does to your narrative.”

The panel closed with a consensus that individuals and authors need to take the time to be sensitive about topics such as sexuality, race and gender, especially as time and society shifts. 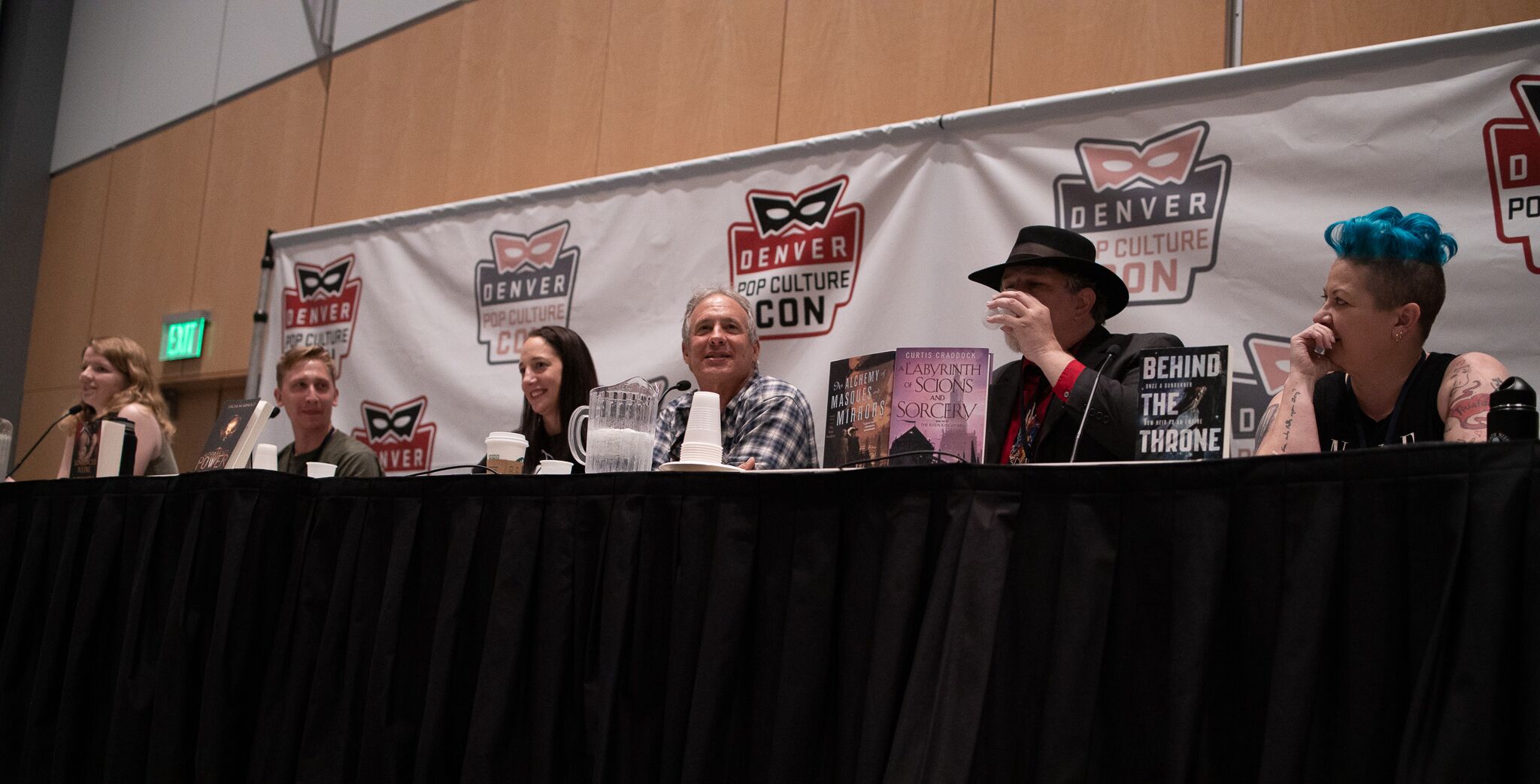 On June 1 Author Sue Duff moderated the panel “Colorado Science Fiction/Fantasy Authors” that gave a deeper look into the world of some successful local authors. Author Dacia Arnold spoke about her new book Apparent Power that is set in Denver and how she took inspiration from her surroundings. “I live next to the airport so I think it was only natural to form a book around all the crazy things that are going on underneath DIA and the Rocky Mountain Arsenal, but also I call it inspiration and just looking in the mountains [gives inspiration],” stated Arnold.

Throughout the panel, attendees were given the chance to ask the authors how they got to where they were today as established writers, how they combat writer’s block and other dilemmas. The authors gave their input and advice on these topics and on how to get noticed by publishers, their tips and tricks on getting writing done and more. Author Brian Naslund gave a bit of insight into his writing schedule.

“I used to wake up at seven and I had a job where I could get work really easily right there a little bit and then head in [to work] then I switched to having a bus commute, so I would write on the bus and now I have a job where I’m basically [always] available. I work from home and [I am]on the Internet 24/7 so people can get ahold of me. I wake up at least by 4 a.m. sometimes at 3:45 [a.m.] so I can get up for exercise and inject coffee directly into my veins and then I turn my internet off until 8 a.m. I write for four hours in the morning and then do my day job,” stated Naslund “You just have to know yourself and when you’re going to feel the most creative and try to coordinate those parts of your day out for yourself and treat them as though it’s the most important thing.” 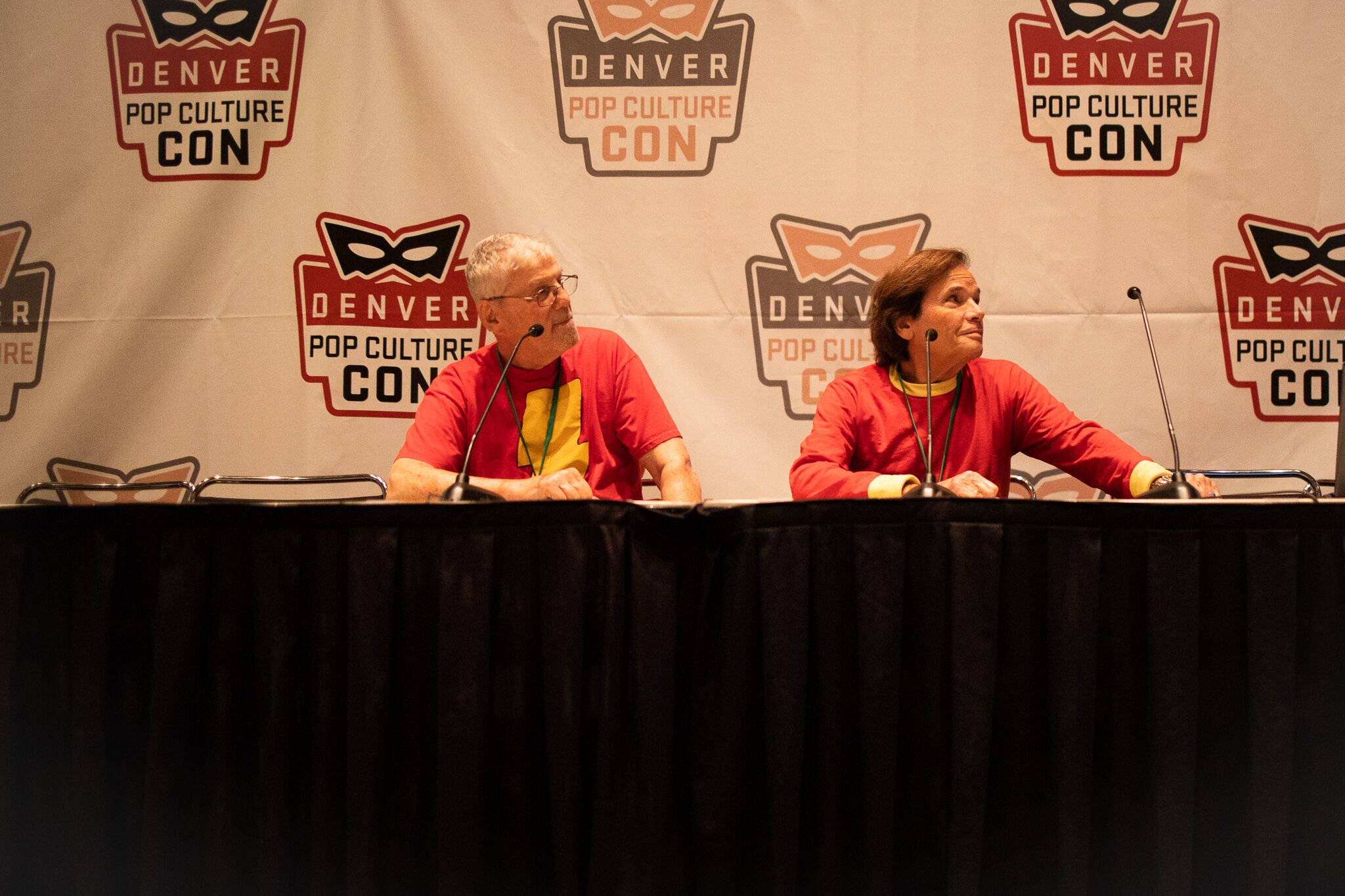 Actors Michael Gray and John Davey from the hit 1970s television show Shazam graced Denver as the new film Shazam has made its way into theaters. The two spoke about their time filming together on set in the heat of summers in Topanga Canyon in California in small trailers. Davey spoke about how he got the call to take the role of Shazam in the television show and didn’t even really know about the series. His son ended up convincing him to take it and later gave a bit of insight on how his costume’s fit was ever so snug. “It was very tight,” he said.

Gray talked about how he was able to get a cameo role in the new Shazam film as a bit of throwback. Each actor gave funny tidbits on behind the scenes quirks and how the two created a friendship as a superhero duo. Many in the audience were thrilled to hear from the two, as they themselves were children when the show had aired.

Back to the Future Spotlight 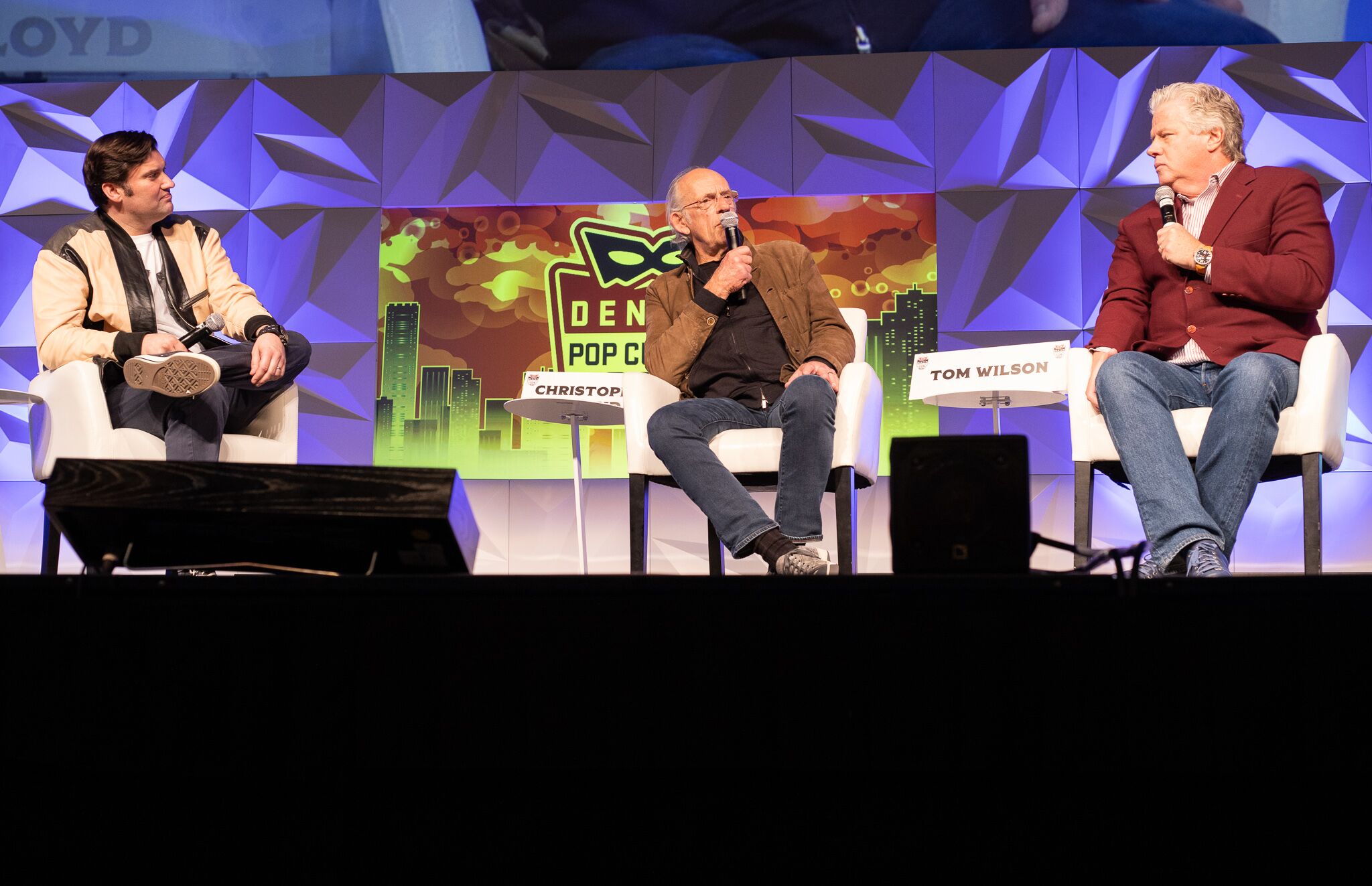 Loud laughs boomed out of Tom Wilson throughout the Back to the Future spotlight that featured actors, Christopher Lloyd and Wilson. The two, who are well known for the roles in the science fiction film series, created a magical atmosphere of wonder during their time in Bellco Theatre.

Wilson danced around the stage, taking the host chair off stage, making jokes and living up to his comedic career. Their banter and humor often stole the show, while discussion about the movie was unfortunately sparse. At one point, the actors were asked — if they could anywhere in time where would they go? Christopher Lloyd answered, “I would go another 10 years ahead because there is so much shit [he whispered]. Did I answer this question sufficiently?” Tom Wilson quipped back, “You did.” The audience erupted with laughter.

Wilson’s response to the question was to go back and see the first ever performance of The Beatles when they first became a band, taking him back to his love of music.

The main hall of the con was jam-packed full of hundreds of vendors to choose from with different sections to walk through. You could explore the area dubbed the Author Alley filled with authors of all sorts that presented their books, signings and a chance to meet and chat with them You could also adventure through the Artist Alley and find some amazing art to purchase, learn more about your favorite films and see videos in action in the Reel Heroes section and of course take a look through the Pop Culture Classroom workshops that were held within Kid’s Lab.

Returning booths such as OG’s Reel Nerds Podcast made their mark at the con this year by participating in different panels as moderators and hosting a live podcast. Boulder video game founder and creator of Serenity Forge Zhenghua Yang held his own booth presenting his new games that help kids find their way through anxiety, friendships and relationships. You could also get charitable by stopping by Cap For Kids, a nonprofit organization that raises funds to help families with children who are going through cancer treatments.

And of course, the con wouldn’t dare think of not throwing it back to its roots by having a giant selection of comic book publishers and comic book creators within the Artist Alley for those comic book enthusiasts. If you love your comics, there were hundreds to choose from and new artists to meet that presented killer works.

This year Denver Pop Culture Con transformed the cosplay competition into the Cosplay Celebration. The celebration had two sections – The Kids Extravaganza and The Costume & Cosplay Showcase. For 2019, the contest allowed more people to enter while showcasing Colorado’s cosplay community. It focused less on competition and gave individuality a chance to shine. This was likely a response to community backlash that the bigger Con competitions were alienating the local cosplayer community.

READ: Colorado Cosplay Academy Brings Back the Art of Cosplay to The Colorado Community

Another change within the contest? There was an audience winner using decibel scale technology, where the crowd determined the winner based on the loudest cheers. 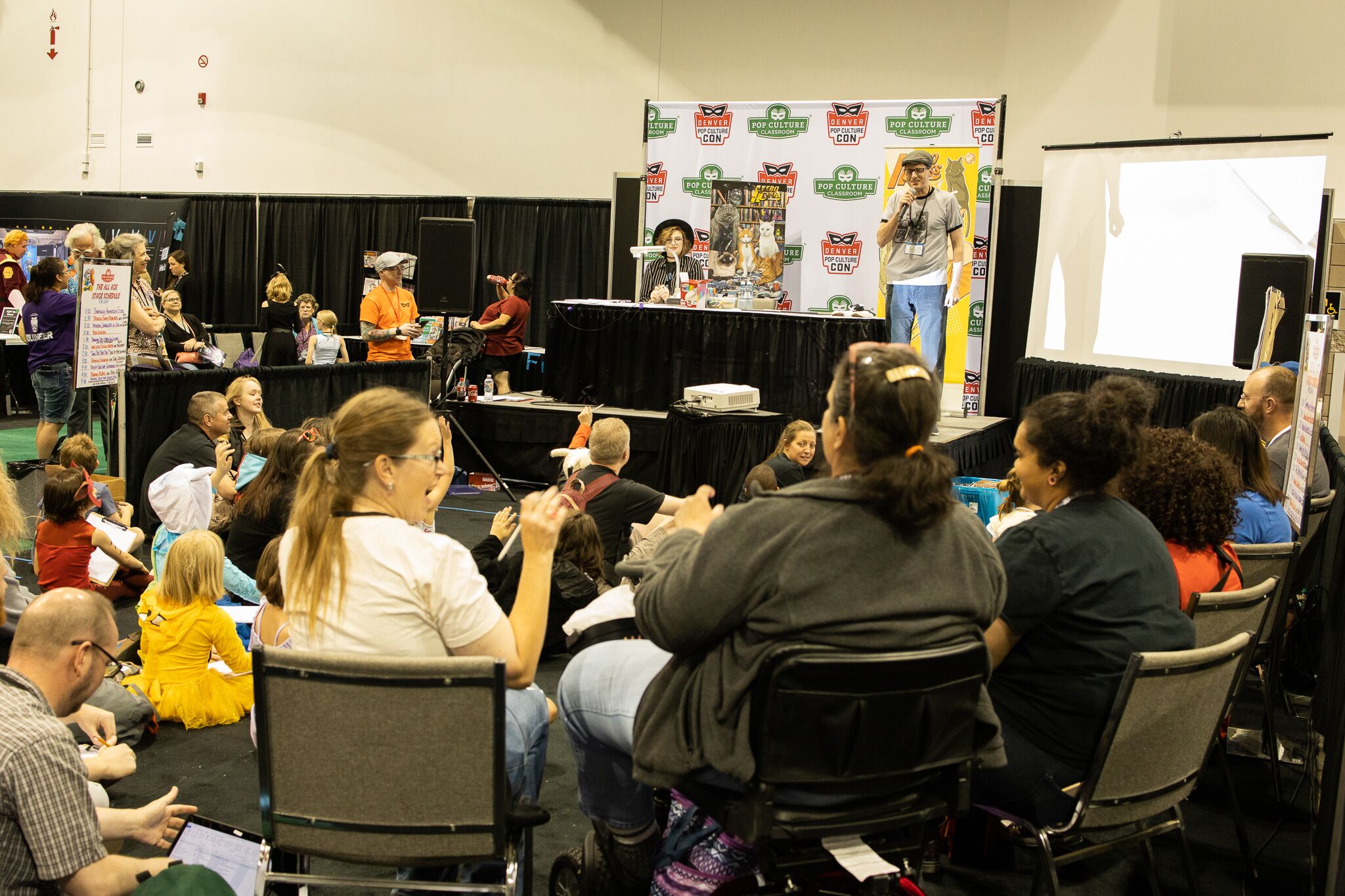 Kids were able to hear from authors, learn how to draw with illustrators, take a crack at stunts with stunt doubles and play in front of a green screen throughout the workshop series. 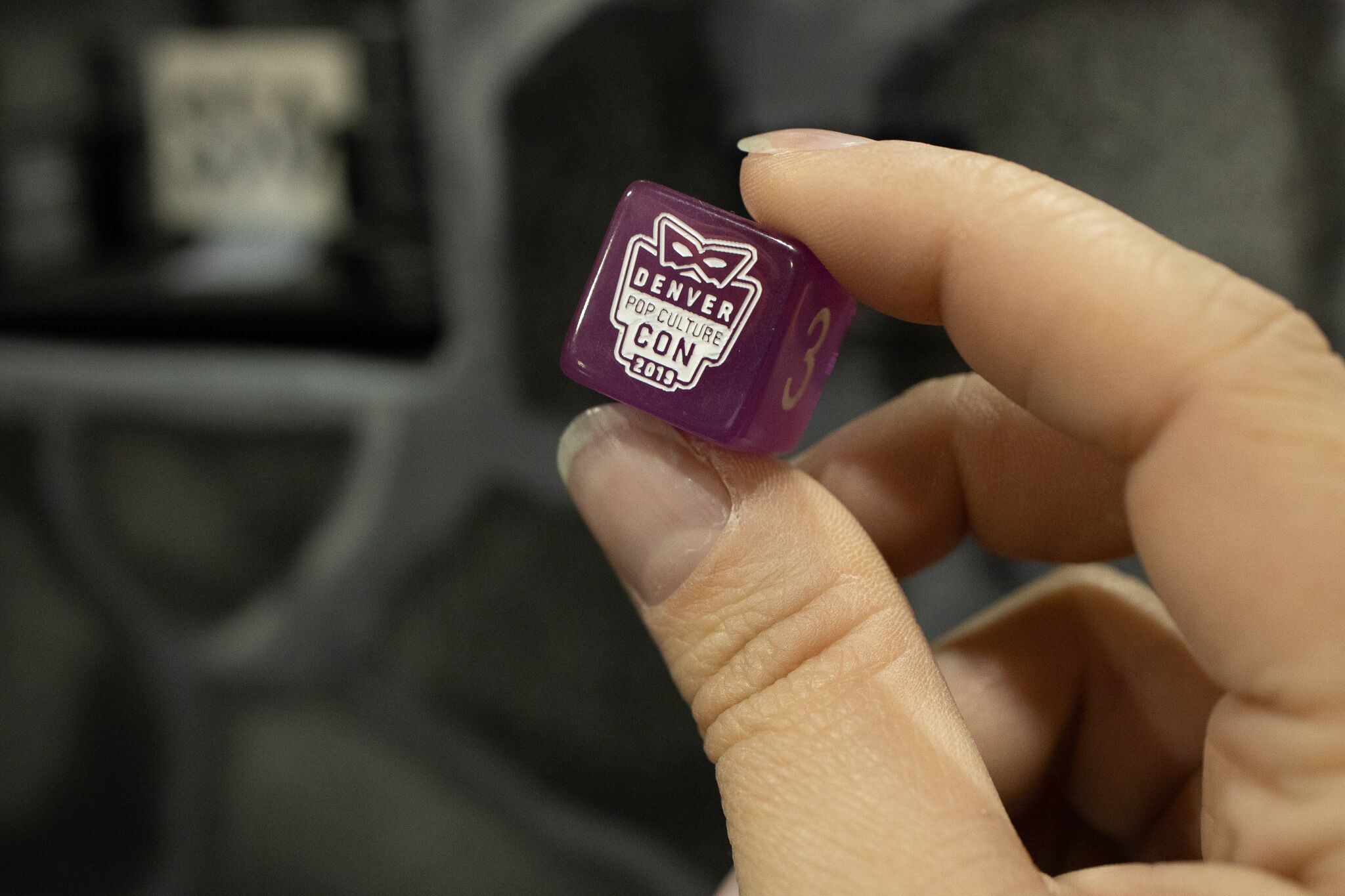 Overall Denver Pop Culture Con is really for anyone and everyone. You can find any flavor genre of pop culture, cosplay or comics that can tickle your fancy. So take a chance an check out next year at and maybe you will get a little nerdy too.