Thrice is designed around three pillars — food, drink and design — which makes an event curated by Thrice either a great opportunity for creative success or a muddied situation where each separate segment is confused by the others. At Thrice’s newest pop-up concept called Chroma, where everything centers around what it feels like to experience color, there were moments of both. Where the design grabbed your attention, and the lighting was just right and the sound of people talking nearby was drowned out by a calming but upbeat frequency from the DJ in the corner, it was blissful. But when something was off, it weakened the enchantment to a degree that felt unfair. 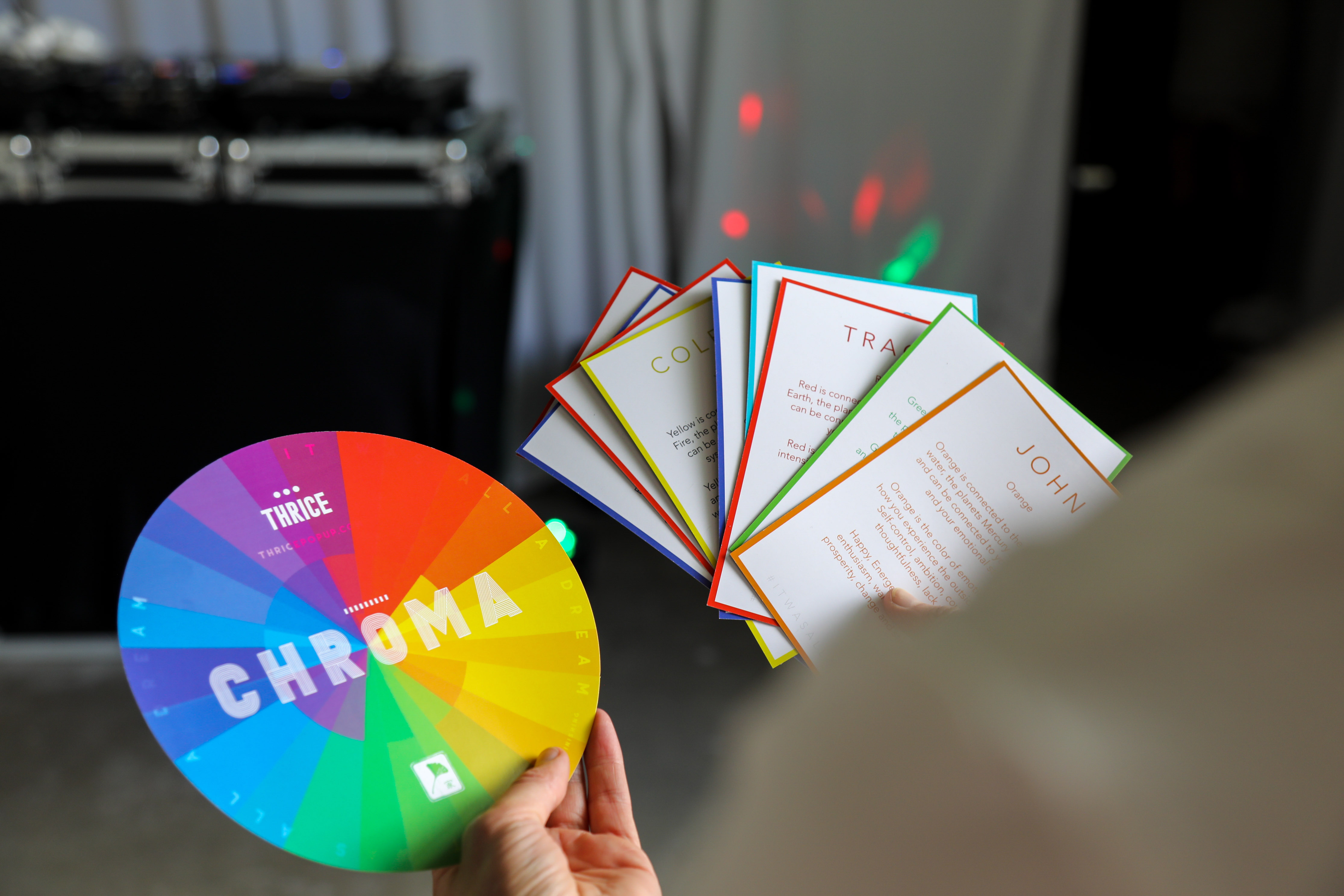 The menus and name cards

That’s not to say that Chroma isn’t a work of art. The seven-course culinary journey — available last night as well as on June 5 — is only the first of three chapters in the quest through color. The next phase, happening tonight and on June 1 from 9 p.m. to 1 a.m., is the experiential mixology chapter with live aura readings — the second pillar that holds Thrice up. And to wrap up the weekend and the event, three color yoga classes will be taught by a licensed psychic medium and holistic health coach, Lisa M. Gunshore (who is also doing the aura readings) on Sunday, June 2.

For the culinary part, founder of Thrice Abigail Plonkey asked Uchi’s Denver chefs to create a menu based on the concept of colors, leaving it to them to guide the guests with their interpretations of what that meant. Uchi started in Austin, Texas, in 2003 with fairly humble beginnings and recently expanded to Denver with a location in RiNo. Founder Tyson Cole is a James Beard award-winning chef and his empire of mostly Texas-based restaurants are all top-notch establishments. Needless to say, a seven-course tasting menu inspired by the rainbow and delivered by chefs at Uchi was certainly a magical experience. 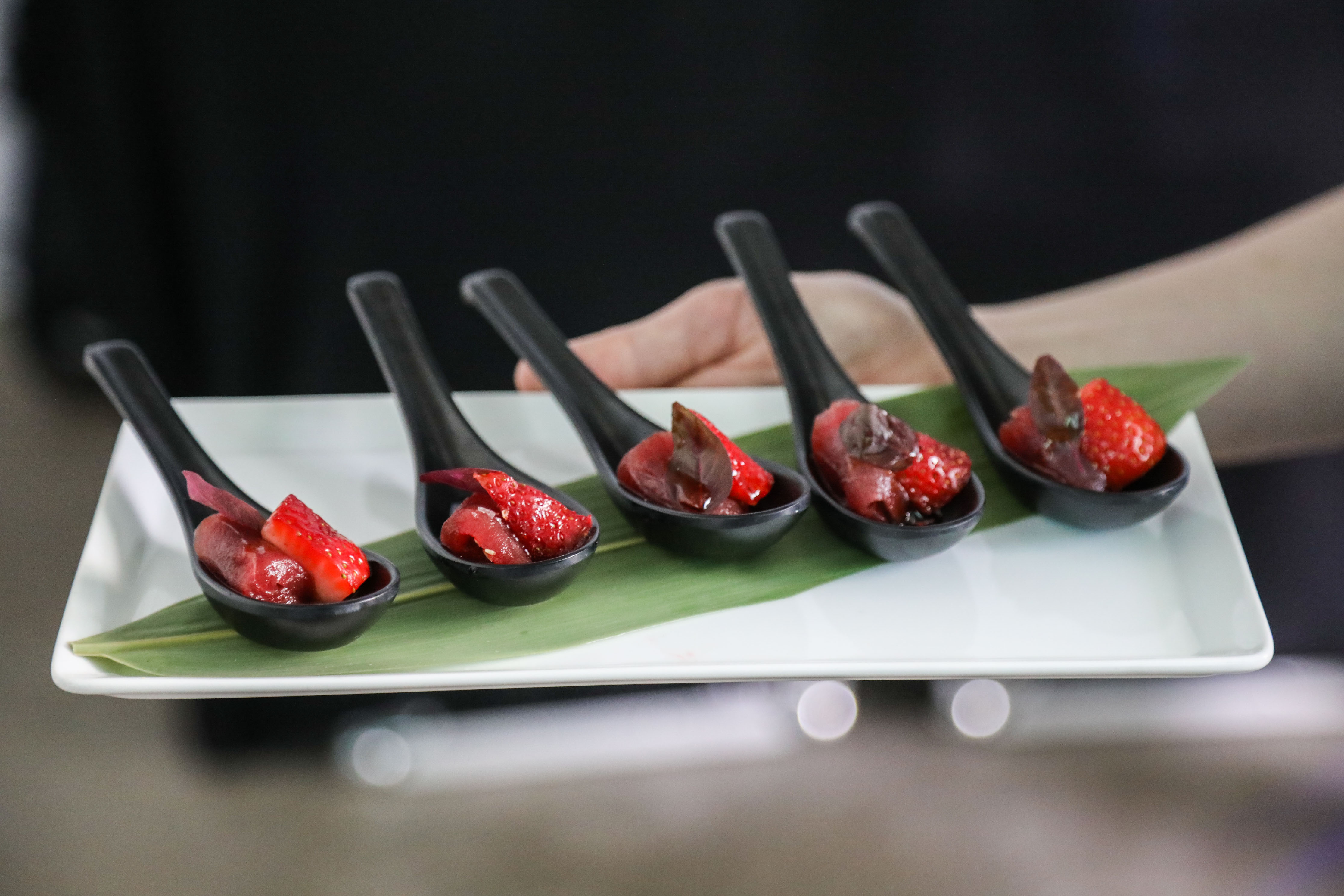 Although not every bite associated visually with the color it represented, lead chef Kaz Edwards allowed his knowledge of food to inform his decisions, leading to some intriguing choices that gave participants more than physical morsels to chew on. Each course of the culinary journey was paired with a description of the food and the reason for picking the food to represent a certain color. At the same time, a large three-paneled screen played clips of graphically designed backdrops. When the tuna, strawberries, chilies and amaranth course arrived, for instance, deep red swirls stretched across the screens. DJ Cyn (who also played at Thrice’s first pop-up, the Korean Barbie-Q) changed the frequencies of her tunes to match each color as well — using sounds to call out to the seven chakras.

Orange and yellow played roles in two plates, with the second course composed of scallop, turmeric and corn and the third course a beautiful nigiri tasting with salmon toro, masu and ora king. Fried green tomatoes with a green curry sauce interrupted the smooth textures of the first three courses, but the change was needed and the visuals on the screens became earthy and textured. As the colors cooled down, the bites were made of purple carrot, grilled loup de mer, blueberry kimchi and delicate borage blossoms. And, much like a true color wheel, the seventh course paired purple and red with dark fruit and chocolate, completing the circle. 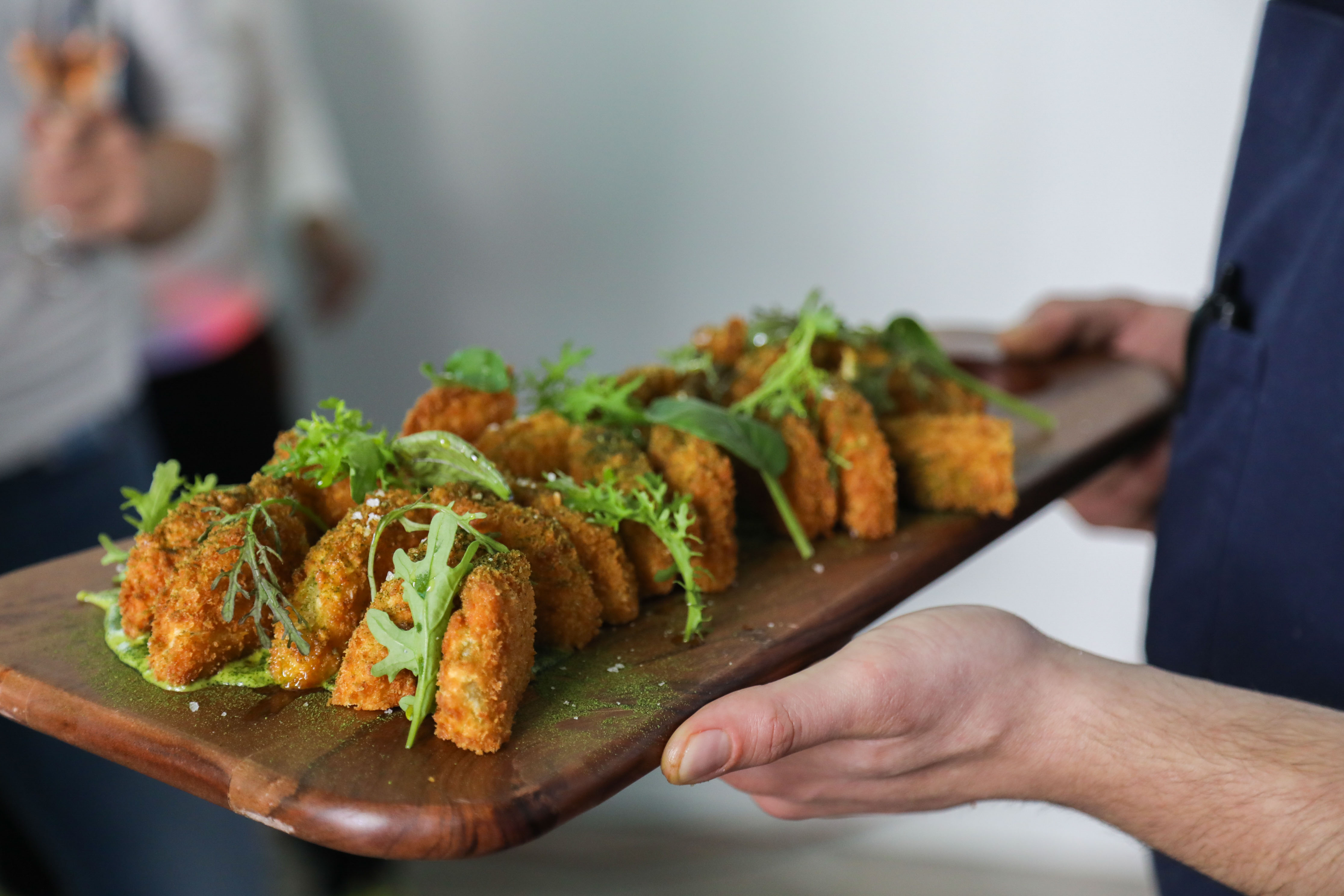 The idea behind Thrice’s new pop-up is well-founded — a sensory exploration of the rainbow. But the execution of the event lacked some of the design elements that are supposed to distinguish Thrice from other pop-ups (and there are a lot of pop-ups recently). Where white sheets hung unadorned from the walls, we wanted to see interactive light displays. Where certain senses like sight and taste were engaged others like smell were left behind. And even though the idea was to deprive all senses in order to fill them in gradually throughout the dinner, it wasn’t quite dark enough, or plain enough to do so.

And with a growing number of immersive art events in the city, expectations are raised unusually high. Although this time, the food delivered by Uchi provided such a deep and heady taste immersion that it saved the other elements from ruining the experience altogether.

Chroma will continue this weekend, with mixology nights on May 31 and June 1 and a color yoga day on June 2. Go here for more information.