Drive-in theaters gained popularity in the mid-1950s — becoming a local hang out for people of all ages. We see them as cinematic locations for many classic movies, including Grease and Footloose, and have become a part of our collective nostalgic memories. As the years have gone by, many projectors began to collect dust — making most drive-in theaters fading treasures for this generation and remind us of a time before we could buy movie tickets in advance to reserve the best seats in the theater.

READ: Red Rocks Is Turning Into a Drive-in Theater This August

There are only about 330 drive-in theaters left throughout the US, and the ones that are still standing have kept their businesses running the same since they first opened — except for replacing old projectors for digital ones. Colorado is home to eight drive-in theaters out of the 330. Since the weather is starting to warm up, get your family or a group of friends together to watch a couple of movies — enjoy some classic movie snacks, good company and watch the sunset before showtime begins.

COVID-19 note: make sure to check with county rules and regulations before you go, as some areas may be closed or have new restrictions.

Where: 8780 Rosemary St., Commerce City
Hours: Sunday – Thursday 7 p.m. – until end of showing and Friday and Saturday 6 p.m. – start of final feature.
Cost: $9 per person and children under 12 get in for free.

The Lowdown: 88 Drive-In Theatre is one of the original last remaining drive-ins in the Denver metro area since 1972. It has been owned and ran by the same family since 1976, so they’re dedicated to making your movie experience memorable. The staff is constantly working with movie studios to get the best movies on opening weekend — making the theater a first-run house. It utilizes one of the best digital projectors. Moviegoers not only get to watch two screenings but three for only nine dollars, unless you’re under 12 then you get in for free. You also won’t break your bank when getting some snacks, so take a trip to its historic snack bar — they wouldn’t be able to stay in business without it.

The Lowdown: Denver Mart Drive-In has to be one of the closest drive-ins to the city since it’s right off I-25 and 58th Ave. It’s the newest addition to the drive-in theater family of Colorado since it first opened its gates in 2015. Sadly, they won’t be opening until Memorial Day weekend (Friday, May 24). Most drive-ins close when it starts to rain, but Denver Mart is open rain or sunshine — the only time it closes is when the weather affects the safety of its guests. Along with many classic movie snacks, such as popcorn, nachos and candy, the Mart Cafe also offers some adult beverages. Although guests can’t bring their drinks into the lot, they’re encouraged to come a bit before showtime to enjoy one another’s company and a couple of drinks as the sun goes down. 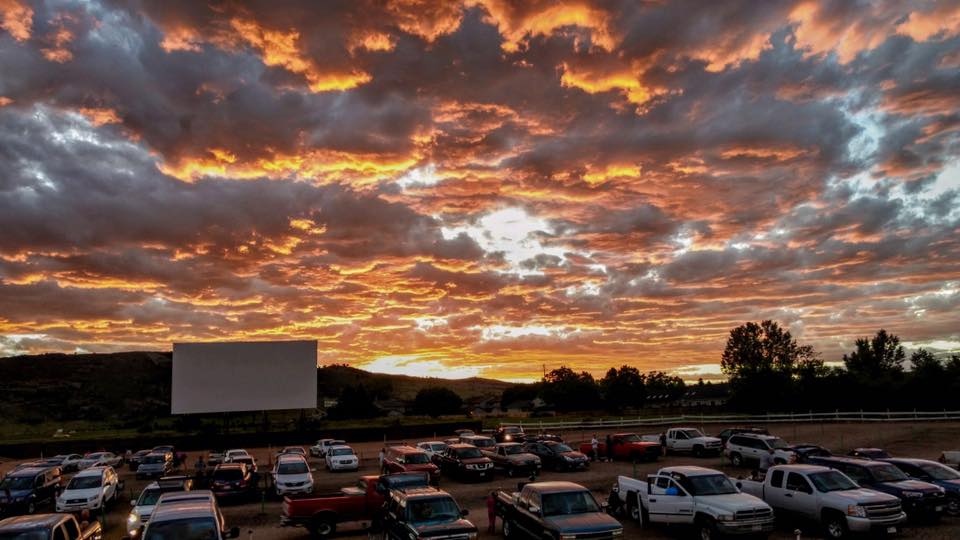 The Lowdown: The Holiday Twin Drive-In is the last of its kind in Fort Collins since the Sunset Drive-In closed many years back. It sits near Horsetooth Reservoir, so moviegoers can bask in some views before getting ready to watch their double feature at the drive-in. Its friendly staff makes sure everything is running smoothly before, during and after showtime — helping guests with any needs whether it be with snacks or parking. The theater was built in the late 1960s and was later bought in 1979 by Wes Webb. Mournfully, Webb passed away earlier this year, but his family still owns and runs the Holiday Twin even though many developers have shown interest in the property. His memory lives on with his wife, Stephanie, children, stepsons, grandkids, great-grandson and the Holiday Twin. 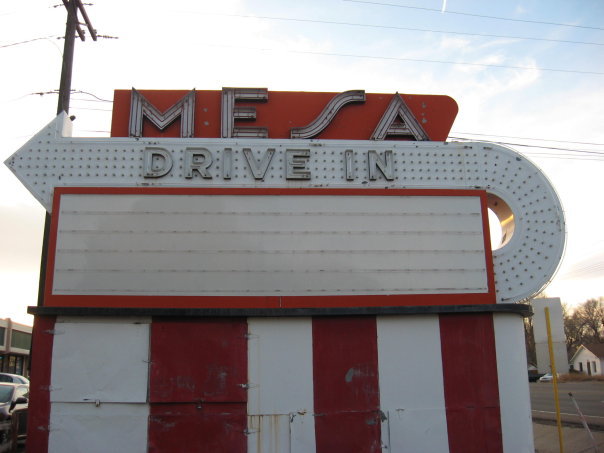 Photo Courtesy of Mesa Drive In Pueblo on Facebook.

The Lowdown: Mesa Drive-In is Pueblo’s longest-standing drive-in since it first opened in 1951. It’s conveniently located right off Sante Fe Drive and sits near the Arkansas River. Most drive-ins are only open weekends, but this one is open seven nights a week once its gates open for the season. It also has three screens that all play double features, so moviegoers will have a few options to choose from. The Mesa staff makes sure you have a memorable experience so that you visit again soon, but also makes great food at the snack bar for a considerable price that repeat customers rave about. Unfortunately, the drive-in is closed for the summer of 2020 due to the pandemic. 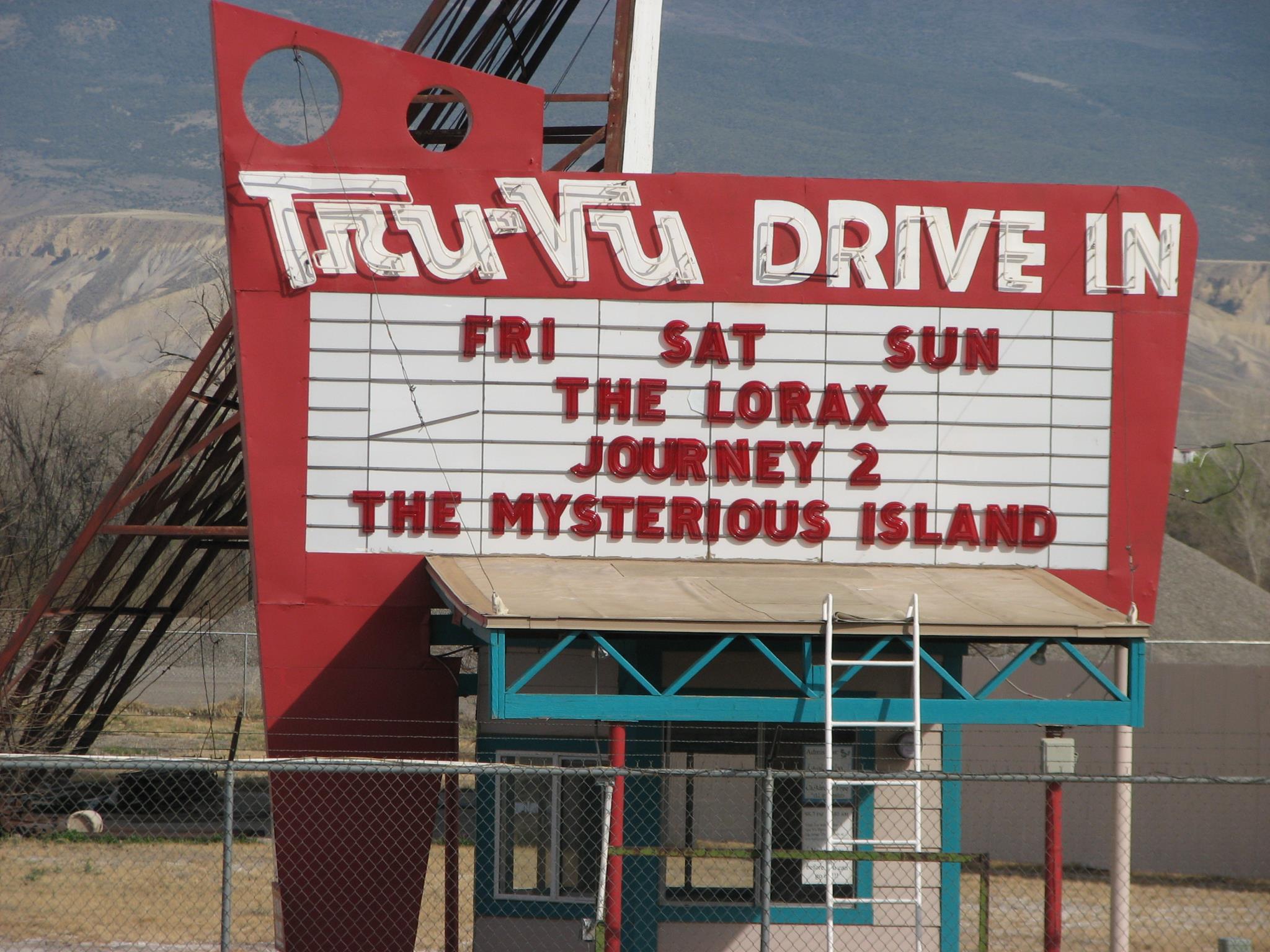 The Lowdown: Tru Vu Drive In is situated between State Highway 92 and the Gunnison River — granting people a chance to watch a movie away from the city lights and under the stars. This drive-in has become a part of many family traditions, but visitors from out-of-town will get to relish in the small town hospitality if they’re only passing through. Visitors also have a chance to socialize with locals and strike up a conversation about the drive-in and town. There’s only one screen standing, but it tries to screen the best movies that are out each weekend. 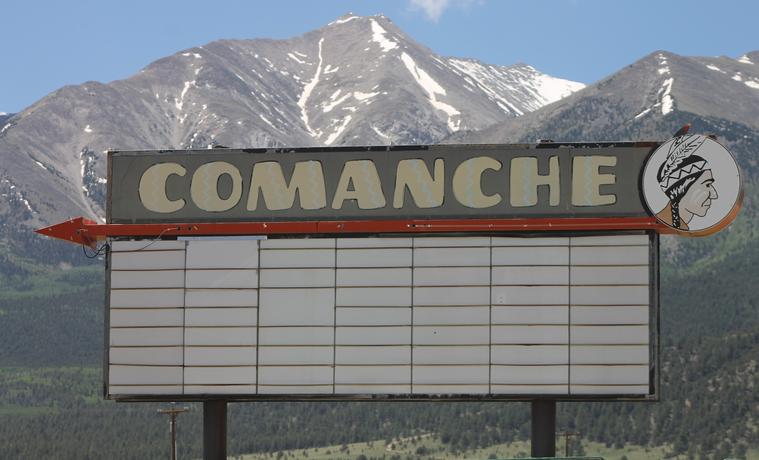 The Lowdown: Comanche Drive-In has been a family-owned business since it was first bought and built by John and Pearl Groy in 1966. It’s settled at the head of Arkansas Valley and near Cottonwood Creek — sitting at an elevation just below 8,000 feet which might make it the highest elevation of any stationary drive-in in the U.S. Moviegoers get to enjoy the mountains surrounding them and their new 4K digital projector that was installed fall of 2018. It’s open during sunshine, rain or snow — having their first ever snowy showing in its history last November. Unfortunately, it doesn’t seem like this drive-in has back-to-back features, but it typically screens some blockbuster movies and nothing can really beat movies in the starlight. 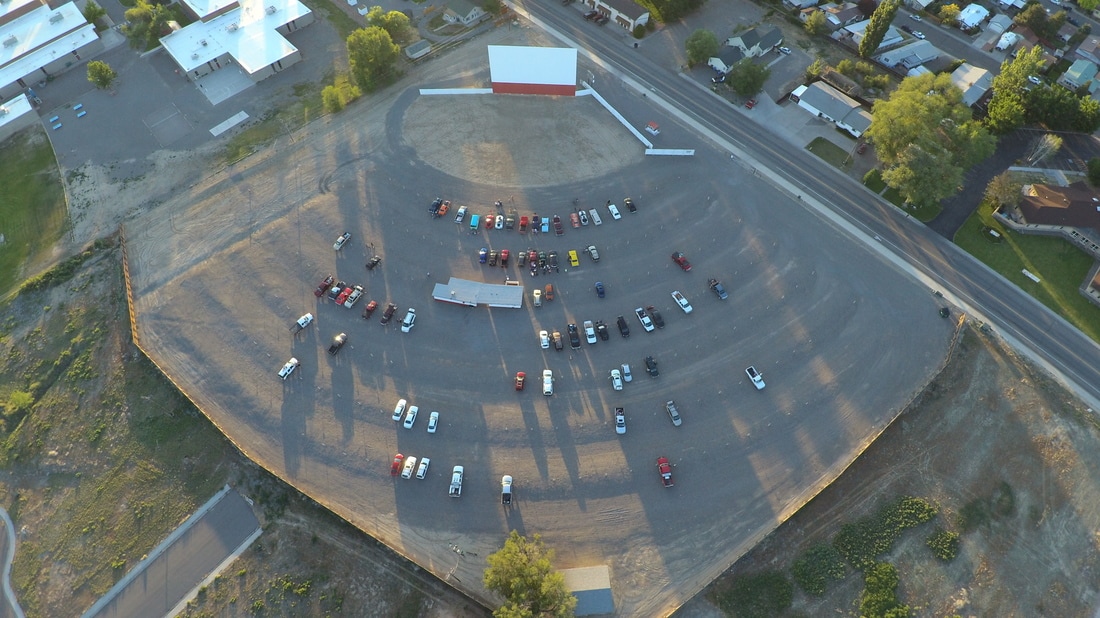 The Lowdown: The Star Drive-In Theatre might be the oldest standing drive-in theater in Colorado since it first opened its doors back in 1950. Its service is wonderful just like their homemade burgers and fries, which is said to be some of the best in the town. Some visitors even get a chance to meet the owners of this drive-in — making the experience just as memorable. The Star makes sure to keep the nostalgic tradition of drive-in theaters alive through its food, prices and atmosphere. 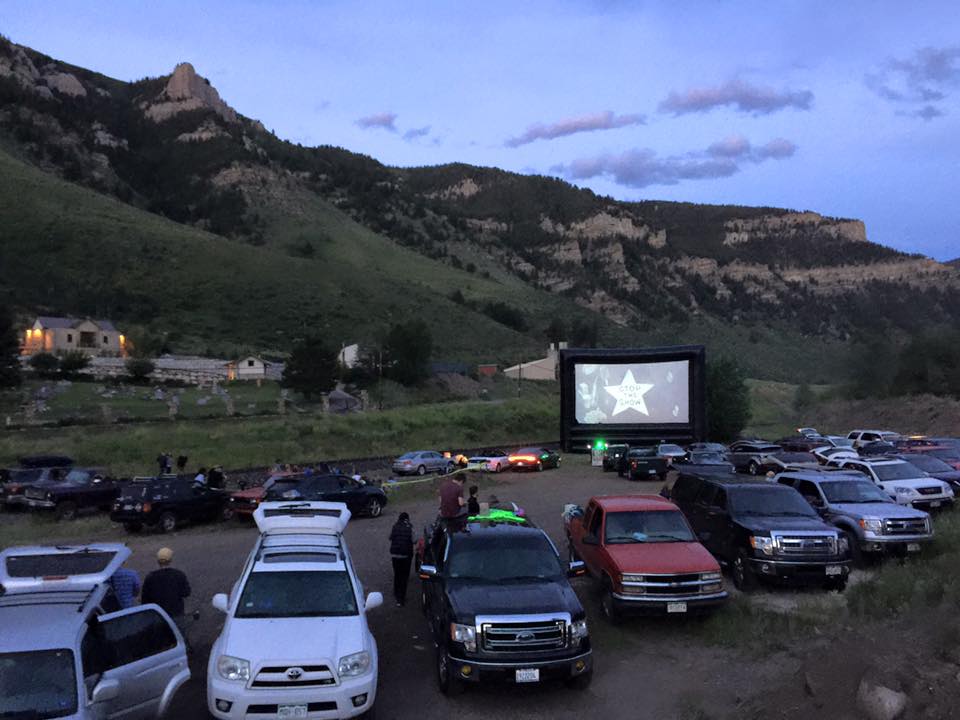 Where: 801 Ed6, Minturn. (Little Beach Park)
Hours: Only open through July and early August, see show dates here.
Cost: Prices range from $10 – $75 depending on the package.

The Lowdown: Blue Starlite Drive-In is a summer, pop-up drive-in theater that’s nestled in the High Rockies of Colorado — Vail Valley to be specific. Its been making an appearance in Colorado every summer since 2016, and it sits at 7,998 feet making it one of the highest, mobile drive-in theaters in the country. The creators of Blue Starlite will make sure its guests experience something one of a kind. It stands out because it’s a seasonal pop-up theater, and it only screens classic movies, such as Star Wars: A New Hope, Goonies, Back to the Future, The Shining and many more. Unfortunately, moviegoers will not get to relish in the cheap prices, snacks and double features of typical drive-ins, but it’s stunning location right next to the mountains make up for it. It’s recommended to buy your tickets ahead of time because they only let 30-50 cars in each showing. 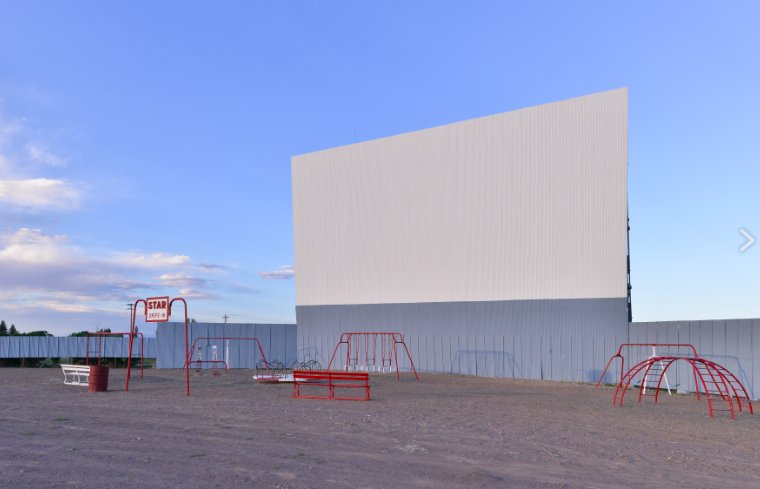 The Lowdown: The Movie Manor is attached to the historic Star Drive-In, which was built in 1955 by George Kelloff. It’s located three miles west from town and overlooks the mountains. The best part is that guests who stay at the motel can catch a screening from the comfort of their own room. The Manor’s 14 original rooms are the only ones angled towards the two screens since they expanded over the years. There’s even a playground with swing sets and a jungle gym for kids to enjoy. This drive-in theater motel is a hidden gem in the Rockies — the locals, snacks and surroundings will surely make your time in Monte Vista memorable even if you’re just passing through.

To enjoy your time at any drive-in make sure to check each drive-in theaters’ sites regularly for showings as some might change due to weather and movie availability. Showtime always begins at dusk or as soon as its dark out. Nearly all drive-ins organize cars by size — smaller cars in the front and larger, lifted ones in the back. Please make sure to arrive before showtime, so the staff has time to organize everyone in the proper place. If you do arrive after showtime begins, you’re advised to turn your headlights off and drive at the advised speeds or slower because pedestrians will be walking around. Moviegoers can get snacks anytime during a movie, but there’s typically an intermission between each feature. Most importantly, have fun and be courteous to the people around you.