Utopia is a mercurial construct. Philosophers throughout history have dissected what their idea of utopia could be, landing on sometimes far-flung conclusions. But the lesser-known definition behind utopia is “nothing” or “no place” — an idea that utopia has such a vast expanse of possibilities that it cannot be any one place or thing. Denver-based artist Jonathan Saiz wanted to embody utopia in his new exhibition at the Denver Art Museum (DAM), called #WhatIsUtopia.

READ: Denver Artist Jonathan Saiz to Display 10,000 Tiny Artworks at DAM – And Then Give Them Away

Composed of 10,000 small square “paintings,” Saiz’s exhibition is more about an overall ambiance than about each individual artwork. Discussions about his installation have bounced around for more than a year, but ultimately Saiz completed the massive workload in 150 days. It’s positioned in the Eyes On space on the fourth floor of the DAM, so as soon as you enter the gallery your eyes are drawn to it naturally. 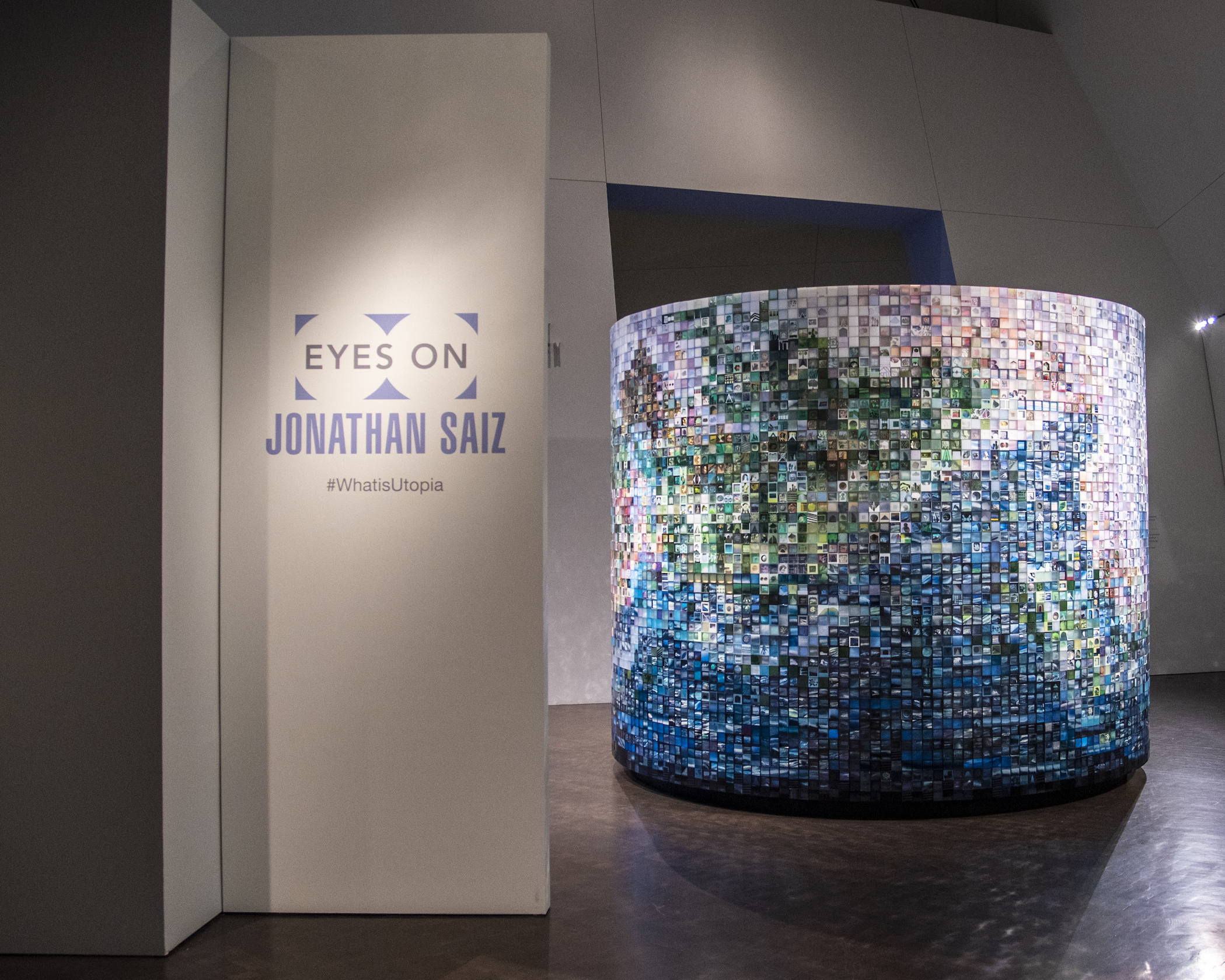 Lights shimmer off the surface of the pieces — which are all in acrylic boxes, taped to a single column — reflecting like a disco ball onto the walls and ground. The first impression is mesmerizing, eliciting gasps of wonder when visitors step into the space it occupies. To the left of the column, there are five framed pieces, each holding one of the boxes at eye level — representing five idealized utopias found in historical literature.

The column is large enough to walk around without seeing people on the opposite side, allowing for ample time to inspect as many tiny boxes as you can. Between the movement of stepping around the column and the hypnotic, mosaic-like aesthetics, the entire experience is meditative. Through strategic placement of similarly colored pieces, Saiz suggests a pixelated landscape — waves at the bottom, land masses with mountains, skies with clouds. The lack of definitiveness allows each person to project their own vista.

But, don’t be limited by your own field of vision — bend down or stand on your tiptoes to discover what the installation looks like from different perspectives. Every single one of the artworks is handmade by Saiz and include some extraordinarily valuable objects, like an engagement ring passed down from his father, gemstones sent to him from Instagram followers and real pearls, as well as normal artistic mediums like paper, modeling clay and canvas. Once you start exploring, you’ll notice repetitive motifs — ladybugs, gremlins, waves, faces and more — which are a product of Saiz’s tendency to work in series or collections.

“The imagery is designed to spark different dialogues about what utopia is,” he explained. “People tell me all the time that it reminds them of a specific place or time, but for me, it’s about the feeling of positivity.”

That feeling of positivity is what Saiz also considers the magic spell of this display. His inspiration for the exhibition was rooted in the desire to give away all 10,000 pieces — yes, for free — and the design elements and actual implementation of the installation came after that. The dynamic light bouncing off the decorated column happened as a happy accident — and to Saiz, that is a sign of a positive feedback loop that only occurs when the intention behind something is good. “I want to communicate optimism and hope and possibility to other people making art — to remind them that art doesn’t matter if you don’t connect with other people,” he commented. 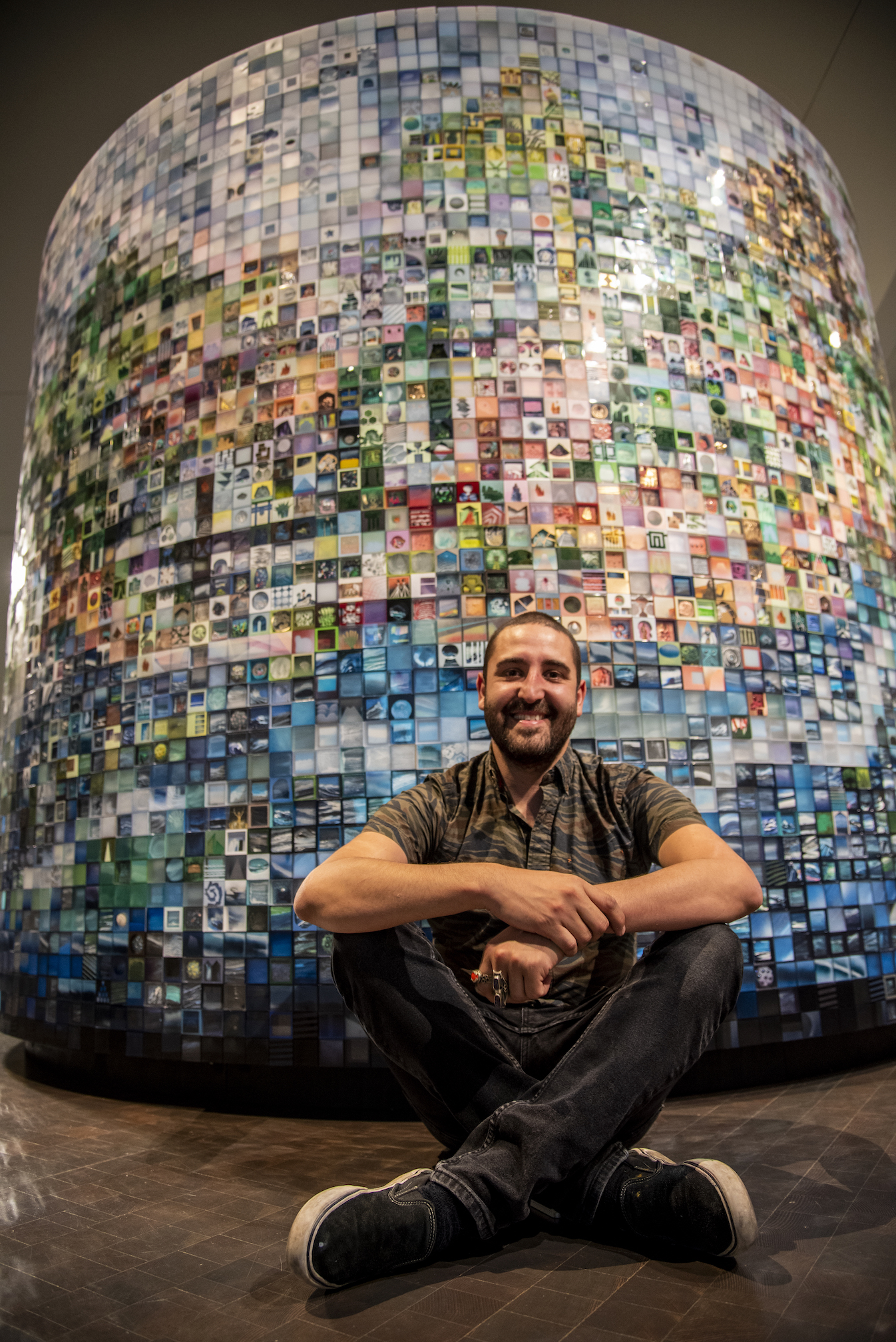 Although this is the first time Saiz has displayed work inside the DAM, his resume includes an impressive list of other art institutions where he was able to experiment with his radical beliefs about changing the art world. “The thing I keep going back to is this pyramid of contemporary art. It feels like as the prices get higher, the accessibility gets lower and there’s this whole group of people that don’t know that contemporary art is for them,” said Saiz. His first attempt at “democratizing” art was at Leon Gallery in 2016, where he sold single paintings (inside the same kind of acrylic boxes he is using now) for $20 each. That continued at Understudy in 2017 with his art vending machine. Last summer he partnered with another local artist Wes Magyar for the project 7,000 reasons, where the duo painted custom portraits for $143 each until they reached 7,000 portraits.

READ: A Denver Artist is Now Selling His Work From An “Art Vending Machine” for $20

All of these projects had a similar goal — disrupting the normal flow of art from artist to gallerist to a rich collector. #WhatIsUtopia works under those same pretenses, but this time, the influence and reach of the DAM offer a wider audience than Saiz has ever had before. “Even having the description that I’m giving these all away on the wall here is huge,” Saiz reflected. “What’s been cool is to tell kids that these 10,000 pieces were made so they could end up with one, if they really want it and try for it.”

This may mark the first time in history that art showcased at a major cultural institution is actually accessible to anyone — to take home. Because of complicated museum reasons, the transactional part of this deal will be done by the local gallery K Contemporary, although there will be a few giveaway events held at the museum for special occasions. 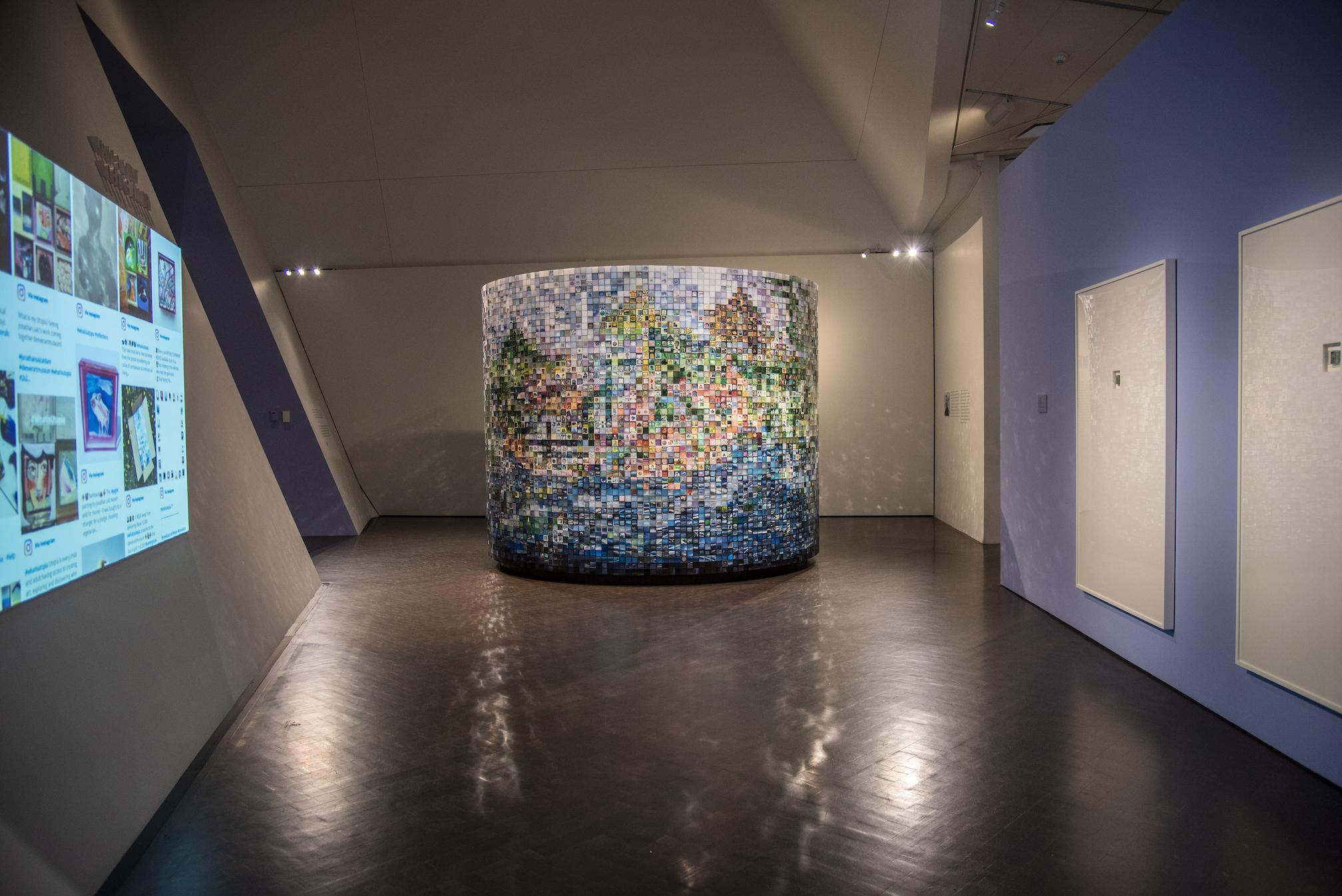 A major part of the exhibition relies on the hashtag — #WhatIsUtopia. Saiz wants it to become a mantra by asking people to post on Instagram using the hashtag with an image of the exhibit or an image that is inspirational. Those posts will appear within the exhibit on a projected screen that scrolls through the feed, showcasing different views on utopia and, hopefully, sparking an international conversation.

“I think this exhibition is about giving people and myself a chance to imagine a better world, in my case, it’s without money, with a more equitable distribution of beauty and value. But also [it’s about] inviting people back into the dialogue of daydreaming. Daydreaming is not foolish, it’s not wasteful, it can be very constructive. These pieces allow people to live for a brief second in an alternative reality,” said Saiz. “So for me, the big ask is — get involved by participating… when your feed is filled with utopian imagery all the time, it can be a self-reinforcing loop.”

#WhatIsUtopia is on view at the Denver Art Museum, fourth floor, until November 17, 2019, and is included in general admission.