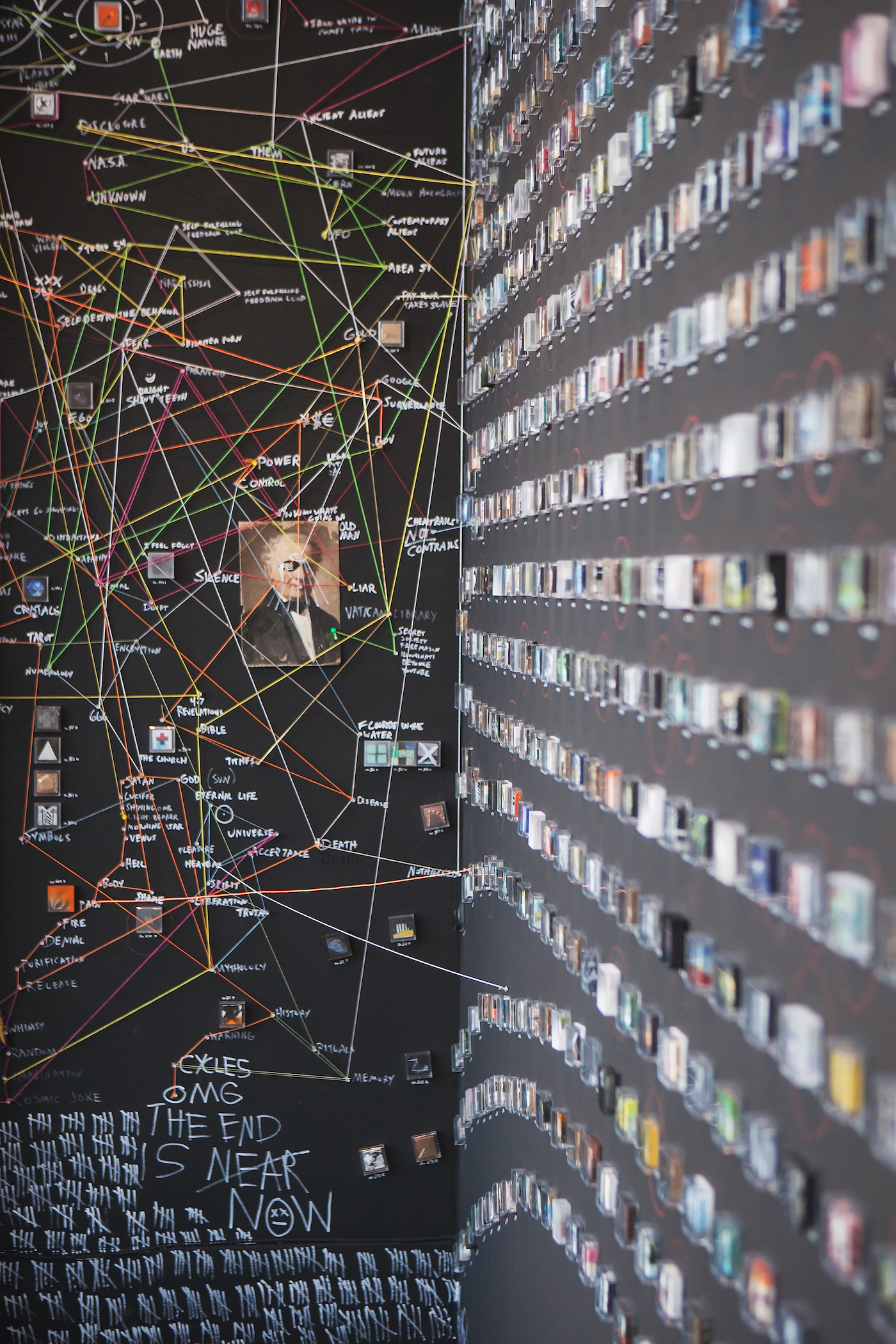 Conspiracy theories are sometimes alluded to in art, but are not usually addressed directly. Often, these ideas are side-stepped perhaps due to the artist’s fear of losing credibility. But Denver-raised artist Jonathan Saiz wants to confront the stigma of believing in conspiracy theories by representing them in visually stunning displays of intense complexity. In The DEEP END — his exhibition at Leon Gallery on view until January 8, 2017 —  Saiz embraces the “crazy” behind some theories in the hopes that viewers might see the impending doom of the end of the world in an artistic and playful way. Saiz has displayed work in Denver before, including pieces at the Denver Museum of Nature and Science, but this work differentiates from his previous installations because it focuses on substance more than pure aesthetics — substance that is accentuated by the combination of approximately 9,000 individually painted blocks that fit perfectly inside transparent acrylic boxes.

“The Database” is the first piece you will see when stepping into Leon Gallery. It’s comprised of a black partitioned wall that holds 901 of these 9,000 individual paintings, technically separate but connected by their uniform size and spacing. Because of his interest and inspiration from sacred geometry (see his other work featured in Juxtapoz or the Talisman series on his website) Saiz incorporates these shapes into his art as much as he incorporates color, texture and technique. And for The DEEP END he focuses on the square as his foundational building block because it is “so pure and elemental, a base for all things.”

Next to these hundreds of boxes, the wall is covered in a complicated web of strings, giving the impression of a crime investigation or a deranged killer stalking his next victim. As an introduction to the rest of the exhibition, “The Database” forces you to look closer at each little piece while still maintaining the wholeness of the composition — a tactic that Saiz uses to deconstruct conspiracies and hopes to incite in his viewers right away. And if you decide to purchase one of the 901 individual and unique wood block paintings ($20 each), it comes with a reminder that it was originally and remains part of a larger piece. In some ways, this is similar to being a believer in a conspiracy theory — you know you’re onto something, but the entirety of that something is too spread out to mentally integrate. 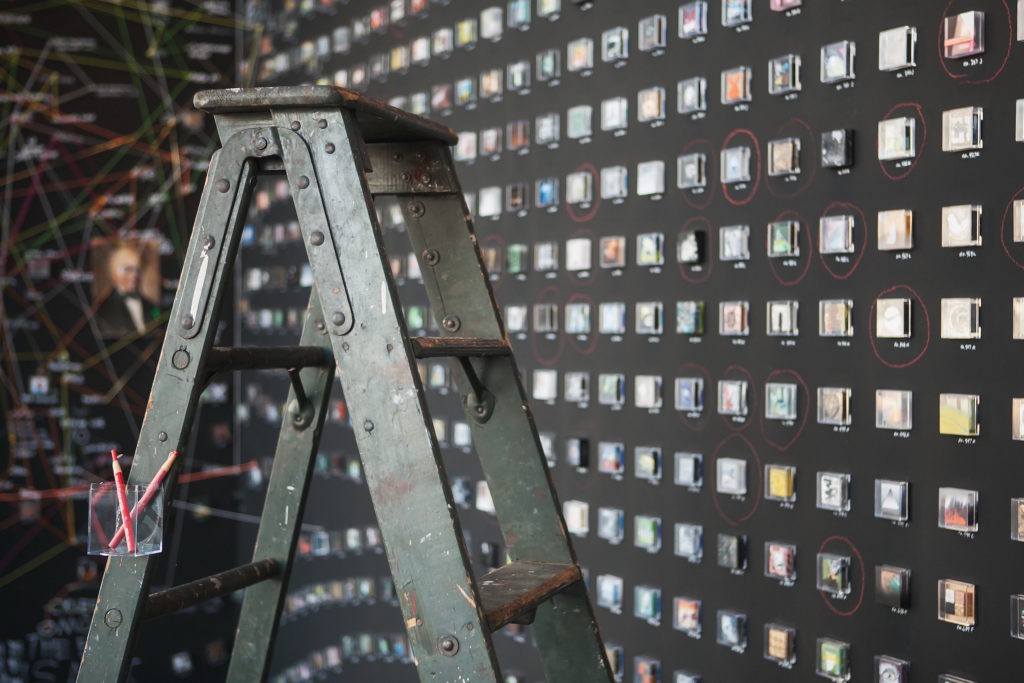 What becomes immediately apparent in The DEEP END, and in other work by Saiz, is his attention to layers and depth in relation to the “bigger picture.” Saiz wishes to express the “limitless multitude of everything, the idea that singular images or ideas are just the tip of the energetic iceberg that cannot be expressed.” And in his exhibit, he achieves this by producing incredibly detailed and complex pieces comprised of many layers of individually painted blocks inside acrylic boxes. Because you can only see the top layer (or other layers only if the top layer’s boxes are left empty) it gives the impression that the whole story is obscured, partially hidden from view.

“The basis of all conspiracy theories is this feeling of disconnectedness from the truth.” 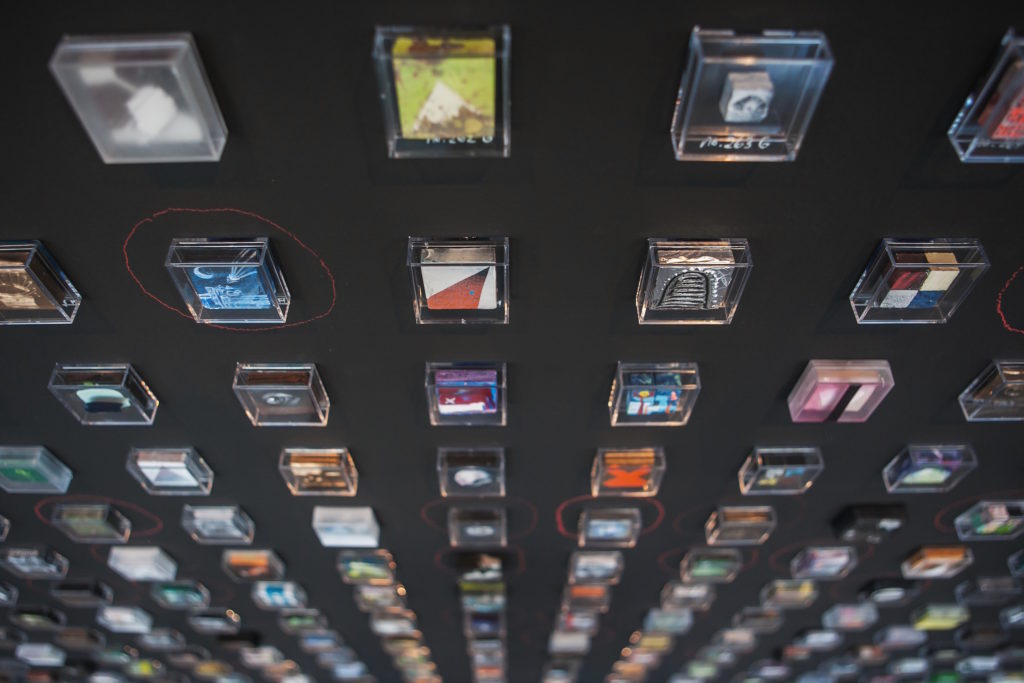 Detail of “The Database”

This is an appropriate and clever way of representing conspiracies because so many parts to those ideas are only half-known or half-heartedly investigated. In his own words, “the layers, most specifically the forever-hidden under-layers of the pieces, reflect that constant irritating feeling that we are only getting the superficial top layer of information in deep issues. The basis of all conspiracy theories is this feeling of disconnectedness from the truth.”

In the rest of the exhibition, a strong division exists between the left side of the gallery, which embodies denial, grief and the underbelly of humanity and the right side, which embodies a lighthearted and tongue-in-cheek approach to apocalyptic scenarios.

Walking along the left side of the gallery will take you down a miserable rabbit hole. From the small squares at the beginning (including one titled “#ugh”) to the sparkling and sinister collaboration with Lewis Neeff (“DIG, human, DIG”) to the large, layered box of “We remember when the sky was blue.”

“We remember when the sky was blue”  is an ode to one of the most well-known conspiracy theories, “chemtrails” from aircraft. Brilliantly situated so that it appears to be from an aerial perspective — looking down even on the planes from above — this piece highlights the industrial nature of so-called “chemtrails” by reversing our point of view. The individual boxes with paintings inside are coordinated to appear as buildings and streets, again maintaining that balance between micro and macro worlds. Each building is an entity itself, and yet each building is made up of dozens of little entities. And by representing multiple “chemtrails” simultaneously, Saiz impresses the connectivity of single and separate events upon us in a subtle and terrifying way.

“I don’t feel hopeful, in that I’m pretty sure we are on a one-way path towards an inevitable collapse. BUT I do feel positive and empowered by this belief.”

In the middle of the room sits a monochromatic bookcase, “Human Scale,” which incorporates 105 books repeating six words over and over: “Wake up, do some shit, sleep.” This piece perfectly joins the left with the right side because it could fit either theme depending on how you perceive it. In the version that is not for sale, the memoir is highlighted in certain areas, crossed out in others. For an entire half page, everything but “sleep” is crossed out in black marker. It can either be a hopelessly inevitable view of life, or it may be an excuse to take life less seriously. Or, take it the way Saiz himself understands it, “I don’t feel hopeful, in that I’m pretty sure we are on a one-way path towards an inevitable collapse. BUT I do feel positive and empowered by this belief.”

The pieces on the brick wall of the gallery bring some warmth to the whole impending doom energy the left side leaves you with and feels like a guiding light out of the rabbit hole. If your first response is to laugh at any of the concepts, that may be exactly what Saiz intended. He remarks, “this show is about the acceptance of death in a way that allows for a more engaged, but still ultimately meaningless, way of living. I would love for people to run towards impending doom with a sense of glee, instead of fighting each other needlessly just to survive another meaningless day.”

The end of the exhibition is reached with a climactic look at the big picture in the piece titled “It’s only working ’til it isn’t.” A huge composition of many layers in varying thickness, strapped together haphazardly, it signifies the world as we have made it. In many ways, this is the perfect representation of the Anthropocene — the idea that we are entering or already in a new geologic age that can be defined by humanity’s impact on the earth. Some of the detail of the small wooden blocks include trees, asteroids, different facial expressions and oil rigs and fire, among many other subjects. With the title and the technique, “It’s only working ’til it isn’t” tells us one thing: we have probably made a mistake, or many mistakes, but we refuse to change it until it’s broken.

Although The DEEP END uses the framework of conspiracy theories to represent the big picture issues facing humanity today, the truly unique and noteworthy aspect of the exhibition and Saiz’s work in general is his ability to address those issues with thousands of tiny pieces.

Regardless of your own opinions about conspiracy theories and the end of the world, this exhibition is a must-see. Consider Saiz a crackpot, or a clever observer, or a joker, but definitely recognize his outstanding ability to dissect a concept and reimagine it with an artistic finesse that cannot be replicated easily. 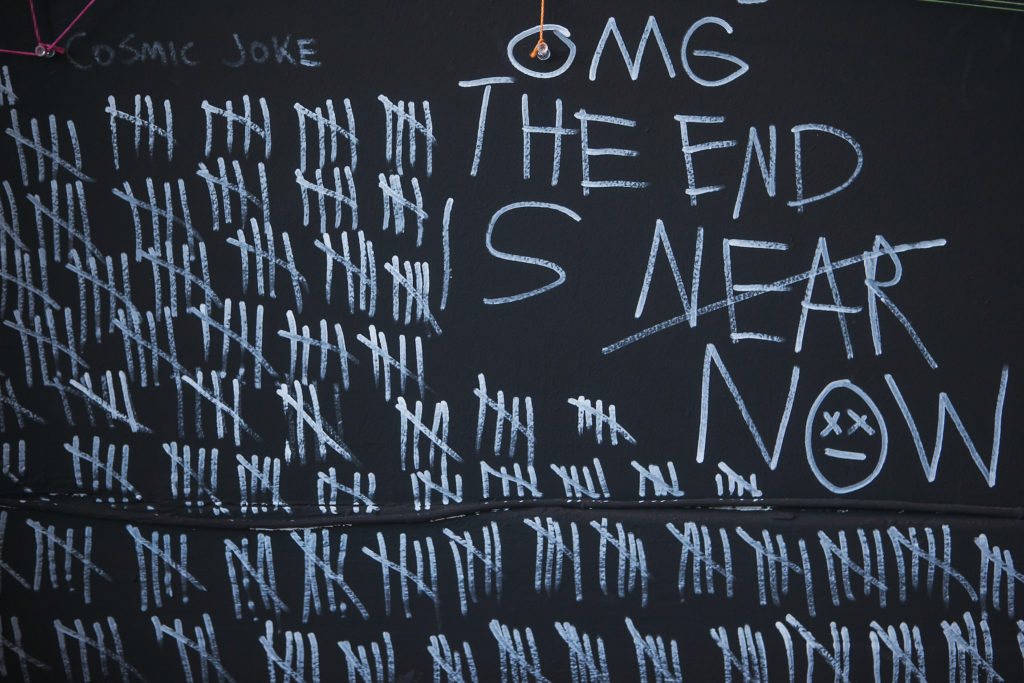 More detail of “The Database”

For more work by Jonathan Saiz, visit his website.

All photos by Amanda Tipton, unless otherwise noted.