Colorado native and Native American beadwork artist Larissa No Braid is a member of the Arikara Tribe, the Mandan Tribe, the Hidatsa Tribe and is part Oglala Lakota from the Pine Ridge Reservation in South Dakota. No Braid grew up dividing her time between different worlds — living in the native world and the non-native world. She creates intricately detailed beadwork pieces that walk the line of contemporary, taking inspiration from her indigeneity while also incorporating new ideas from daily life.

Not only does she craft beautiful beadwork — the technique of which is passed down in her family — she also is heavily involved in the Denver March Powwow and represents Denver across the country at other similar gatherings. 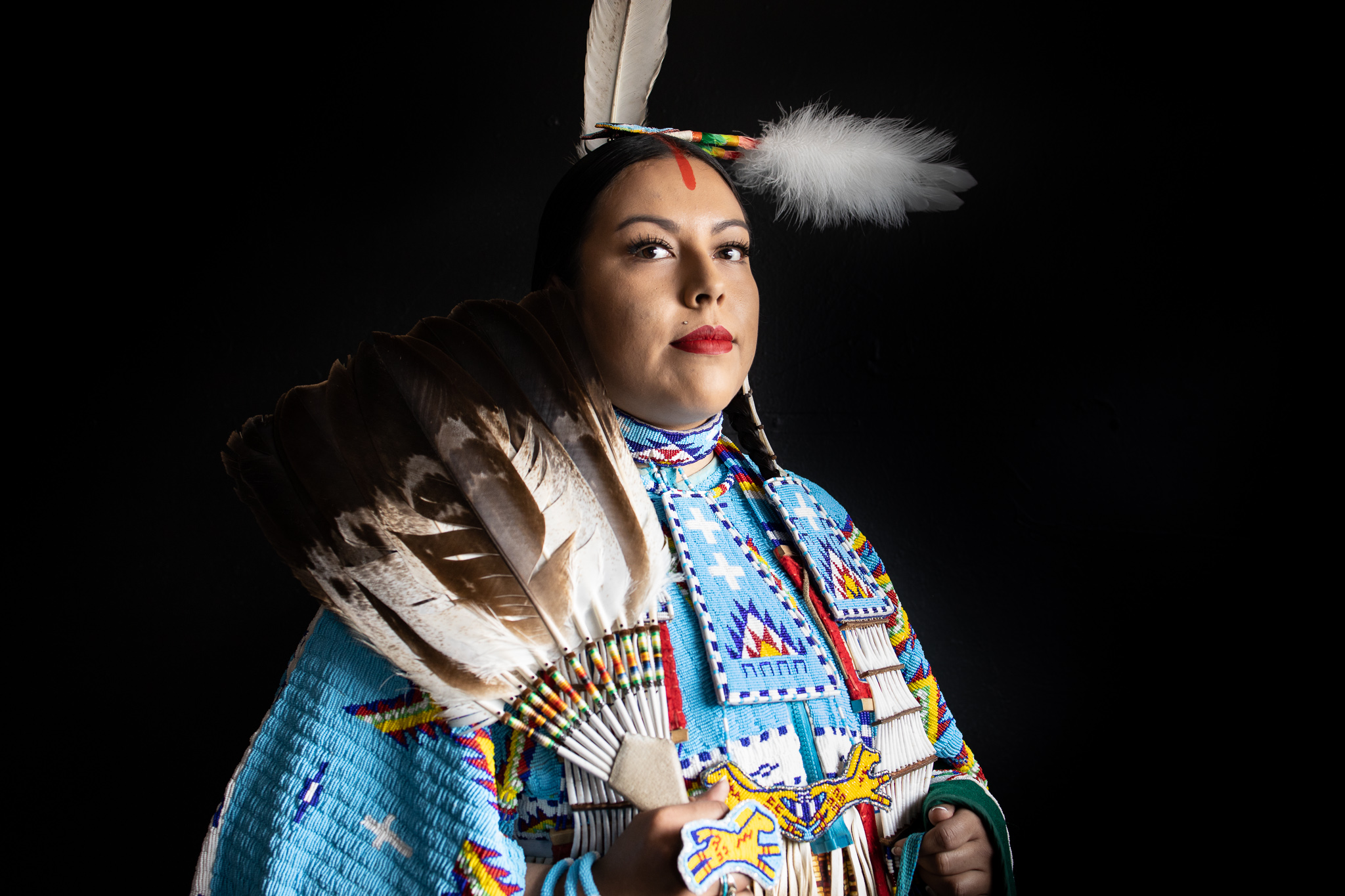 303 Magazine: How did you get interested in beadwork art?

Larissa No Braid: It started with my parents, it really started with my mom and I believe she learned from my grandma and other family members. That’s how she was able to make her own outfits growing up. And as she grew up, she started beading for herself and our other family members, like her nephew Rusty Gillette — he’s a very well-known powwow dancer and she beaded his first outfit and I think he still has it… And then when she met my dad, they worked on outfits together and then when [my sister and I] were born, they made outfits for us. And I just kind of learned from that and also doing the same, making outfits for other family members or friends and just very recently I started taking orders and I finished one about a year ago.

303: How has being Native American shaped your life in Denver and your beadwork art?

LNB: It was kind of hard growing up. I won’t lie because it’s almost like I had to walk in two worlds and that’s the non-native world, you know that’s just going to school everyday life versus the native world going to powwows, ceremonies and things like that. At first, it was hard because I couldn’t really connect with kids here in Denver. I was just different to them and I mean that’s understandable, but the friends I did have were understanding and things like that. And then I also had friends all over the United States growing up because we powwowed all over. So [I] had to overcome some trials. But I’m glad that I [did]. I am able to walk in two worlds — in that I have experiences from both. [It allows me] to be able to do what I can do and love to do it. 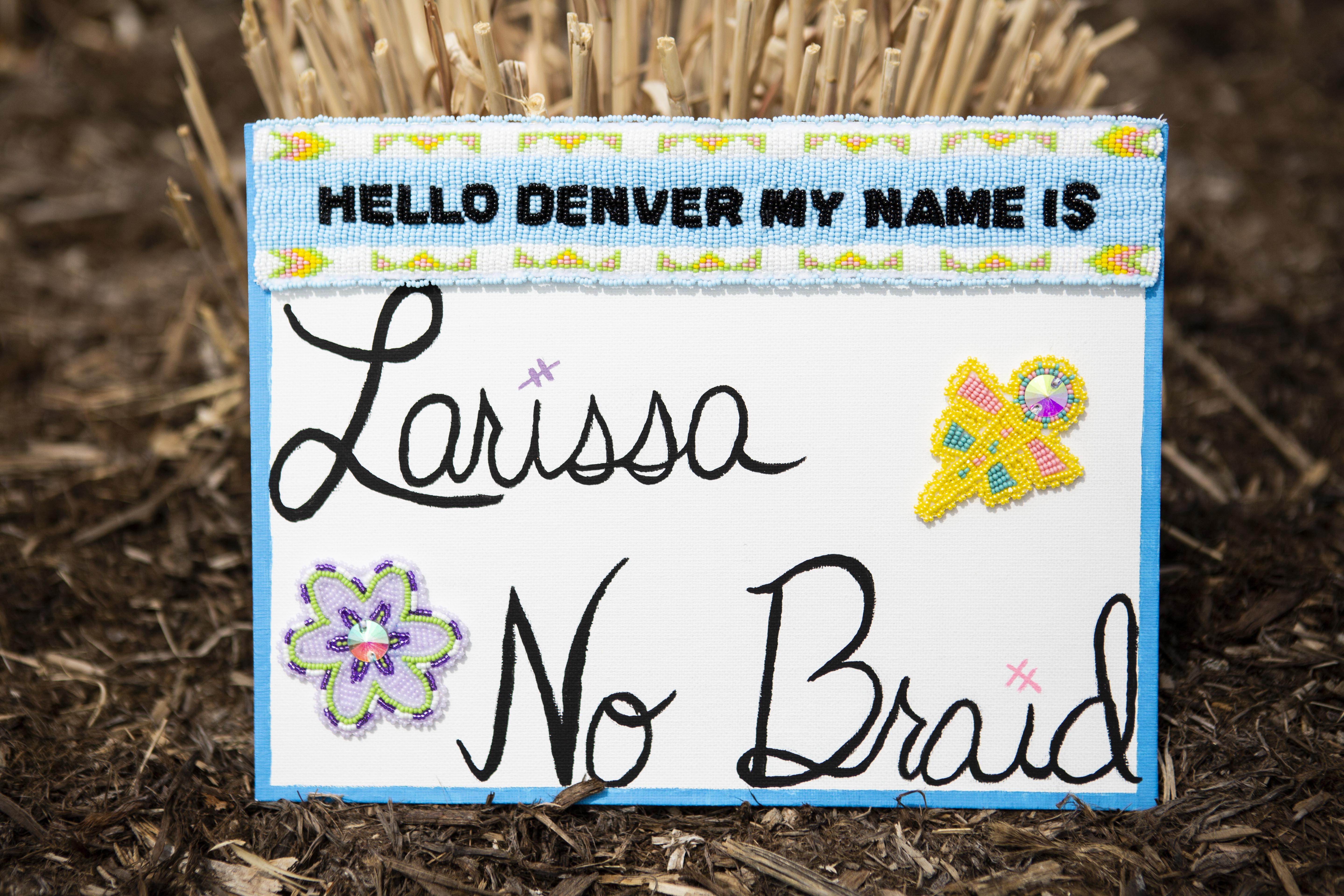 303: You mentioned that living your life in two worlds was hard, how has that influenced your work?

LNB: Well, I should have said three because there’s the non-native world, then it breaks down to my Arikara side and Lakota side. I was raised primarily with the Arikara and Lakota beliefs. I also try to incorporate both tribes into my outfit [and] style of dancing. However, walking in all three worlds has made me appreciate my Arikara [and] Lakota sides because if it wasn’t for my ancestors, I wouldn’t know my ways. I just think the Native American way of life is so beautiful and I’m very appreciative of it and proud of who I am.

“Everything on my outfit has meaning… The paint I wear comes from my Oglala Lakota side, I went through a ceremony for four years when I was a little girl and was given the right to wear my paint.” 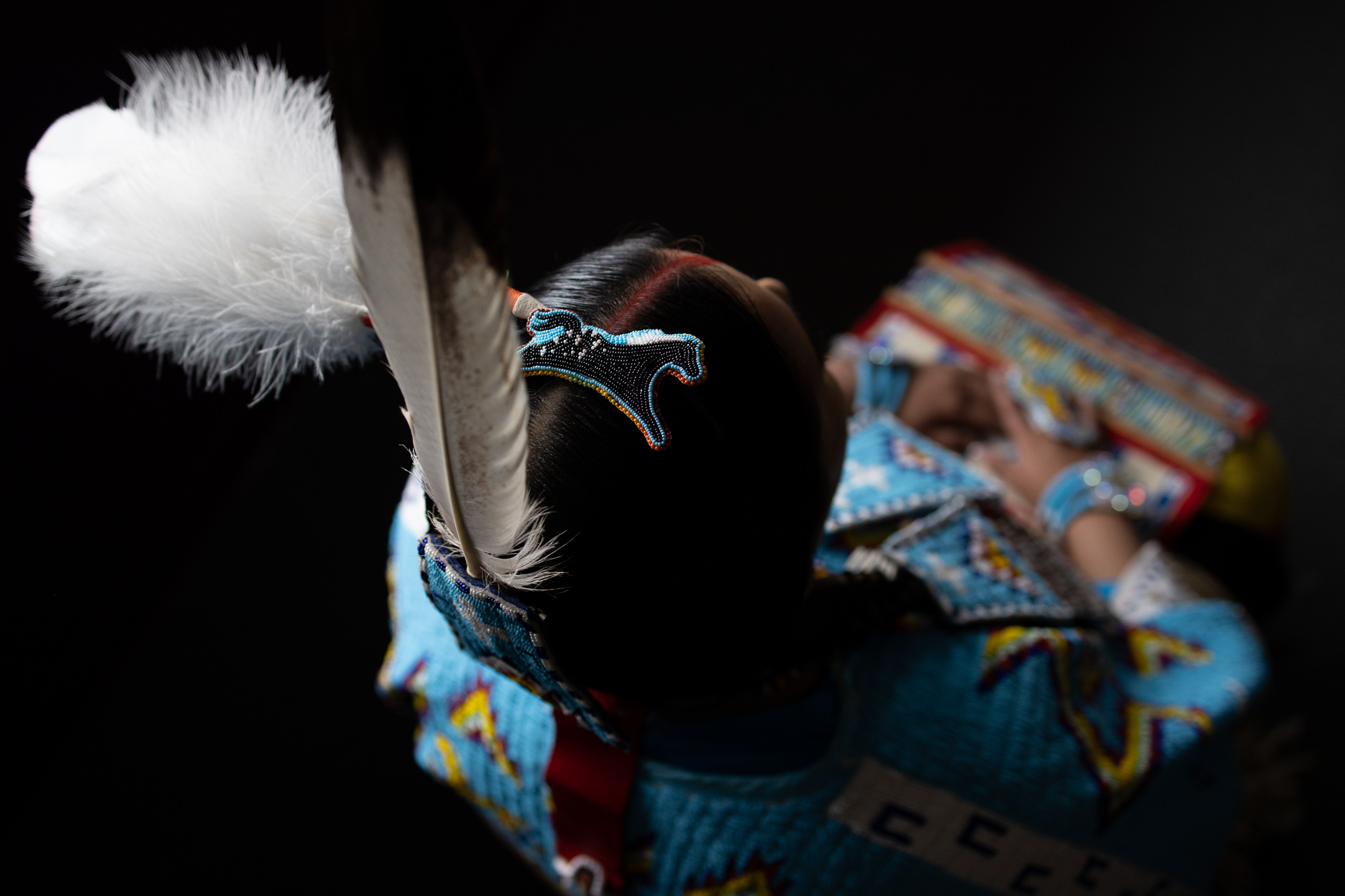 303: How did you get involved with the Denver Powwow?

LNB: My grandma, Grace Gillette, [is] the director of the Denver March Powwow and she has been for, I want to say over 20 years. I don’t know the exact amount of years, but I kind of grew up into it. When I was 16, the committee asked me to be the Denver March Powwow Princess, which is a big opportunity because you’re basically the ambassador for the Powwow and you travel all over and invite people to come and check out the powwow. So that was a really big honor. And then after that, I started helping in different areas, like with registration, vendor check-in, getting packets together and stuff like that. And I want to say for the last five years I’ve been doing the tabulations and that’s kind of a big part because that’s basically the contest part of the powwows. So making sure that all the contests are correct, all the contests points are correct. Making sure everything’s good. So I’ve been doing that for five years and I’ve also been helping with the Denver March Powwow tabulation and that’s when they go to other powwows and do their contest points for them, which is either dance contest points or a drum contest point.

303: Where do you draw inspiration from?

LNB: Back in October we went to Hawaii and I just took it in and everything — the water, the color combinations, we even went to [a waterfall] and they had all kinds of different flowers and everything and it was just so beautiful. So I [have been] liking that a lot and lately, I’ve been drawing it from there or just from everyday things. Like, I have earrings from the NFL series that were inspired by NFL teams. Basically the colors [inspire me] or sometimes we have like native design blankets and I’ll like some colors from this blanket or where I’ll use some colors from [another] blanket and I’ll just kind of go from there and build it on from that. 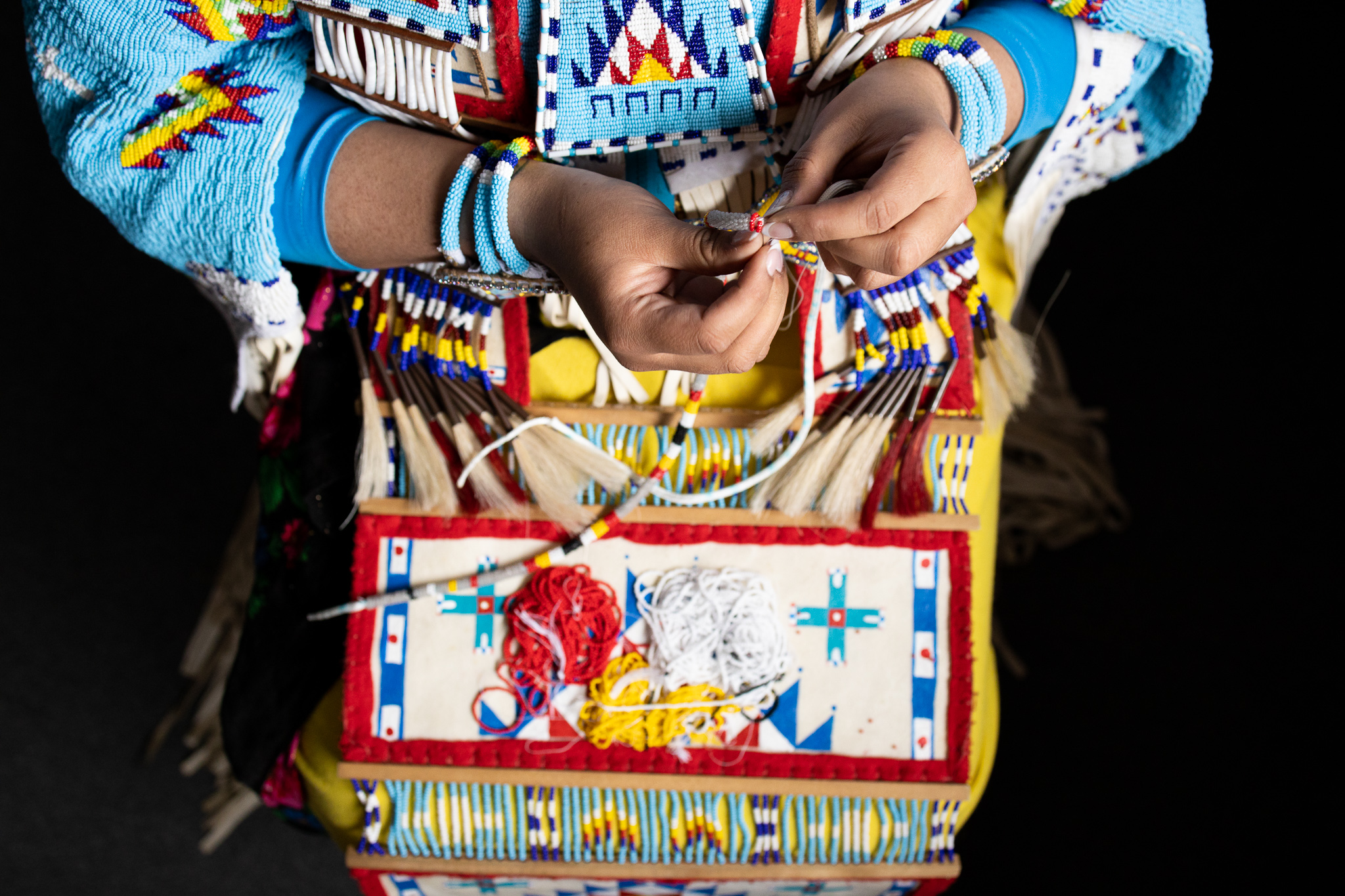 303: So what’s usually the process of creating your beadwork pieces?

LNB: It depends on what I’m working on. Like if it was earrings and if it had a jewel or stud, then you would put that in first and then bead around it [to] make the design. So like this [bracelet] for instance, it’s a jewel and I just bead around it and I like to wash my stuff and dry it and then slowly put it together.

303: How long do your projects usually take you?

LNB: If it was just a simple pair of earrings, I would say like six hours total from making everything to finishing everything. A lanyard takes about six hours to bead and then I would say eight hours total to put that together versus you know, something like my Buckskin, this took about three years to make. It just really depends on what you’re making. And if you want it to be good, then you’re going to take your time. But if you want it done quick, then you’re just going to go fast and go with what you have.

303: Does your beadwork art and outfit tell a story or have meaning with its colors?

LNB: Everything on my outfit has meaning, it was made for me by a family member, or I made it. The paint I wear comes from my Oglala Lakota side, I went through a ceremony for four years when I was a little girl and was given the right to wear my paint. My feathers were given to me by family, my buckskin top was beaded by my parents and myself. The designs on my top were made by my family in Pine Ridge specifically for me. The horse design in my outfit represents my love for horses. My accessories were made by another family member, my grandmothers (both maternal and paternal) helped me over the years by putting my outfit together or helping me put together my outfit in my younger years, and without my family I wouldn’t know how to bead or have any of this beautiful outfit so I’m very appreciative and thankful for them.

303: How do you incorporate beadwork art in your daily fashion?

LNB: I make beaded pop sockets. That’s just kind of a more contemporary thing and that’s kind of a new, I think I would say within the past year it would be the pop sockets and then also like necklaces and earrings. I always wear beaded earrings, like just no matter if you’re going to the store, you know, going to run errands [I] just throw some on. So just be proud to be Native American and proud of what I’ve made. And then I’ve also seen people that are starting to bead the edge of hats, so that’s pretty cool. I kind of want to try that, I like the way some of them are turning out. I also [have seen] girls starting to bead hoop earrings and yeah, that’s kind of difficult but it looks cool. There are many ways you can incorporate [beadwork] into everyday life.

LNB: I have an Etsy store [called] NoBraidCreations.

303: This last question comes from our last interviewee Rosston Meyer: What is your favorite part of a monkey?

LNB: My favorite part of a monkey is their face or their tail. When they’re babies any monkey has the cutest face and some can do some cool things with their tails. 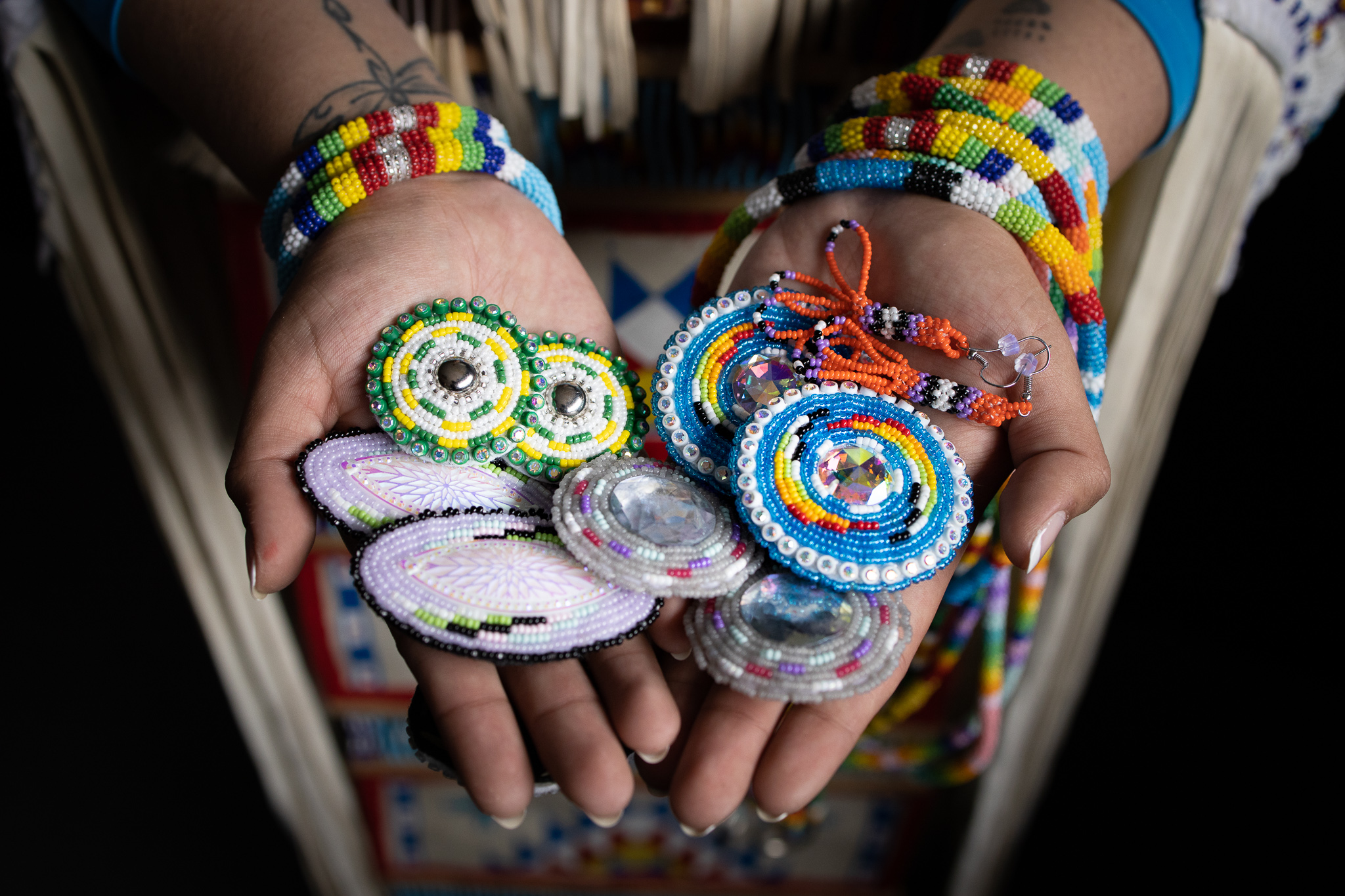