All photography by Karson Hallaway

When was the last time you opened and enjoyed a pop-up book?

If you can’t remember when, it’s time you opened a book from Poposition Press — an independent, one-man publishing house in Westminster that makes pop-up books with original art from artists of all styles. Owner and mastermind behind the adult-oriented pop-up book designs is Rosston Meyer, a Florida native who moved to Denver in 2015 with his wife. Meyer started Poposition Press just a few years before moving to Colorado, in 2013, after a serendipitous collaboration with an artist he already admired.

Now, six years into his decision to make pop-up books full-time (a sentence we never thought we would be writing), Meyer has collaborated with handfuls of artists, published five full-length books, started making 3D prints and even exhibited at the recent Locals Only art show at Mirus Gallery. This year, Meyer will be part of the release of a marijuana-themed pop-up book called Dimensional Cannabis, with illustrations by artist Mike Giant.

Meyer is a curator, a designer, a problem-solver, a paper engineer, a collector, a comic book fan and so much more — and all of those interests and skills coalesce in his customized pop-up books. Each book is painstakingly made by hand — only after Meyer and the chosen artist have exchanged countless hours of edits and redrafts — with every piece cut out, positioned and fastened into the book by Meyer himself.

Walking into Meyer’s house-studio-office, there is no doubt that his passion for seeking out art that speaks to him has led him on this pop-up path. His love and appreciation for visual art in all of its derivations fuels Poposition Press. And the wonder and animation he brings to artists’ two-dimensional work is nothing short of magnificent. 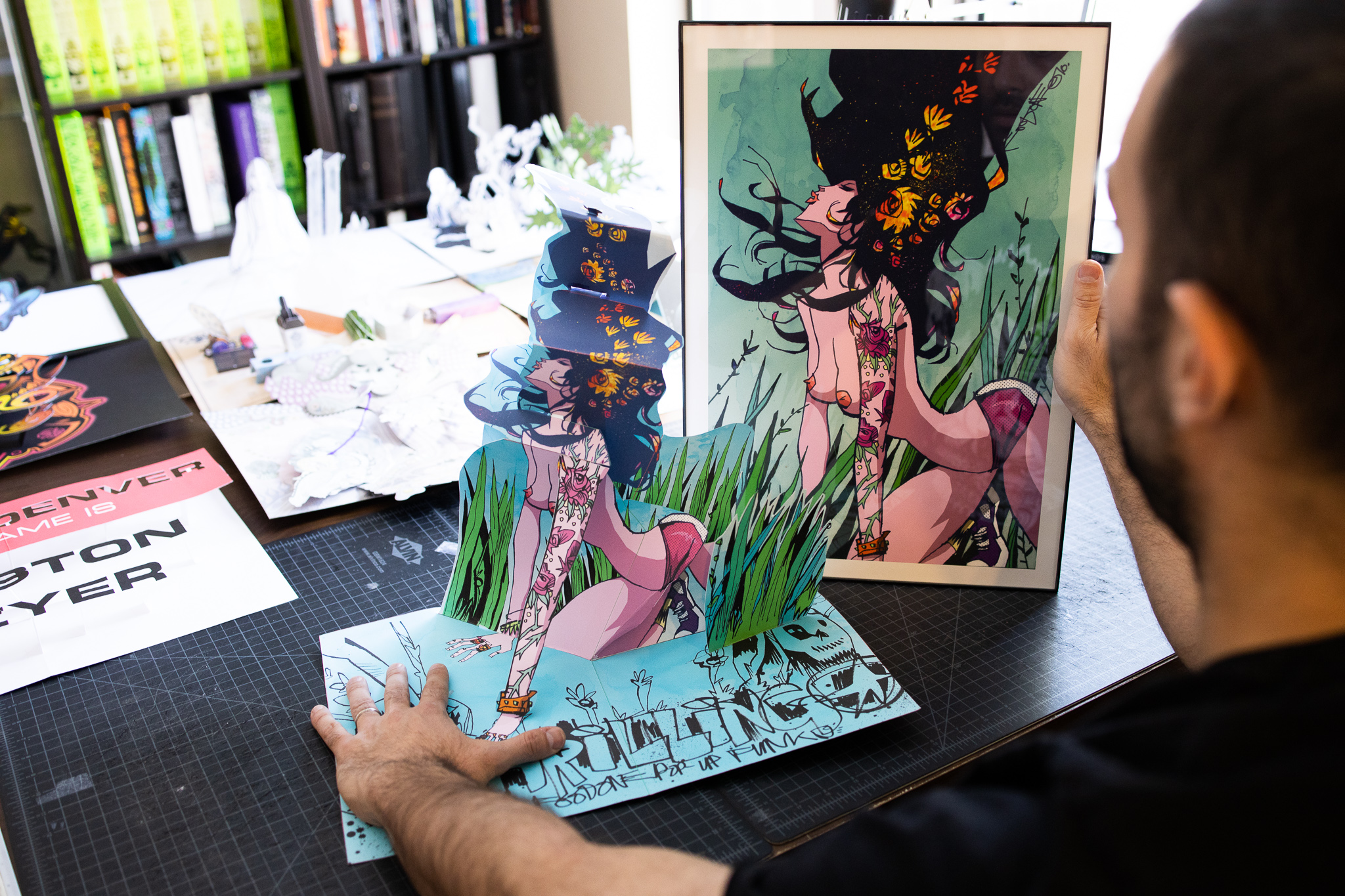 The transformation from 2D to 3D, with a print by Jim Mahfood

303 Magazine: Do you remember the first time you encountered a pop-up book? What was it like?

Rosston Meyer: I do, it was Mickey’s Pop Up Book of Shapes which somehow was not destroyed and is in my collection now. It’s a thin simple book with basic pop-up mechanisms where Mickey and his crew are at the circus and encounter crazy stuff like cubes, triangles and circles.

303: When did you start creating pop-up art?

RM: I started experimenting with pop-ups when I was in my early 20s. I was taking some art classes at Florida Atlantic University and my final project that semester was this big colorful pop-up scene with flowers and trees and a small black box with a stick figure in a tie working. I always wanted to figure it out and kind of dabbled in it a tiny bit for a long time before actually doing anything about it.

303: Was there a formative moment for you in deciding to do something so niche?

RM: Yes, so I had the idea to make pop-up books with artists that I like for years. I had met Jim Mahfood and pitched the idea to make one to him somewhere around 2010/11. Then finally in 2013 we started working on what became my first pop up book — Pop Up Funk which was a 10-page book featuring some of Jim’s artwork in the pop-up format. So if it wasn’t for Jim saying yes back then, none of this would have ever happened.

Only 100 copies of that book were made and are long gone, so we’re working on a re-release of Pop Up Funk right now which will feature some old pages and some new pages. 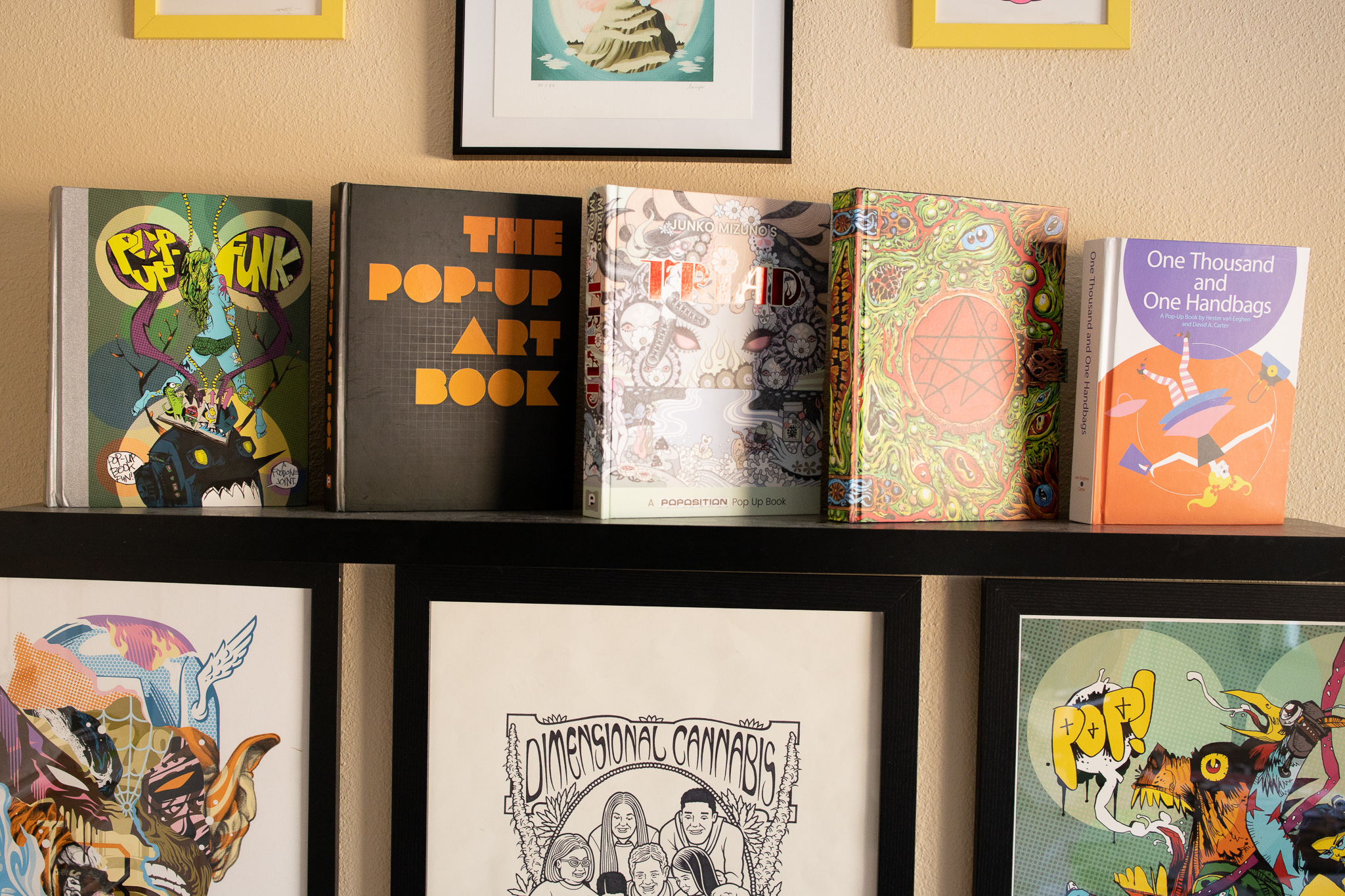 303: What were the first challenges with pop-up art?

RM: The first challenges were figuring out the basics as far as paper engineering goes. Reverse engineering art can be really easy in the initial mockup stage, but sometimes really hard to figure out how to actually make it work. That’s pretty much a constant challenge when it comes to paper engineering.

303: What are some of the challenges now?

RM: After designing and producing a couple pretty intricate pop-ups at this point I think the challenges now, for me to find a middle ground between something that doesn’t have a lot of assembly steps and something that has that wow factor. Of course, very complicated pieces are always very impressive, but sometimes very simply engineered spreads with great artwork are just as effective. Keep it simple. That’s really important to remember with what I’m doing.

303: I read in a different interview with you that you go through hundreds of email exchanges with artists. What are the rewarding parts of this intense collaboration, and what are the challenges?

RM: Since mostly I use pre-existing art, there’s a lot of time spent on both my own and the artist’s end trying to figure out how to pick apart each element of the original art and add dimension to it. So that part is kind of a challenge that’s figured out before really any of the physical work is done. There are fill-ins or repainting elements for the artists to do, and a lot of work by nature of how paper engineering is for me — that is always a challenge.

The most rewarding part is that after all the work, communications, revisions, and just time spent on one page it’s such a motivating [feeling] to finally see it finished. It’s motivating for me, especially with the spreads that at the beginning seem impossible to do and 20 revisions later you’ve got it all figured out.

303: Do you see yourself as an engineer, designer, collector, artist — or some combination of all of that and more?

RM: Definitely a combination of those things but if I had to pick one it would be designer. Even though pop-ups and paper engineering is an art form on its own, I feel like I’m taking work from “real” artists and designing a unique product with their art. I also consider myself a collector, as I’ve been collecting and following some of the artists that I’ve worked with for years before doing anything with them. 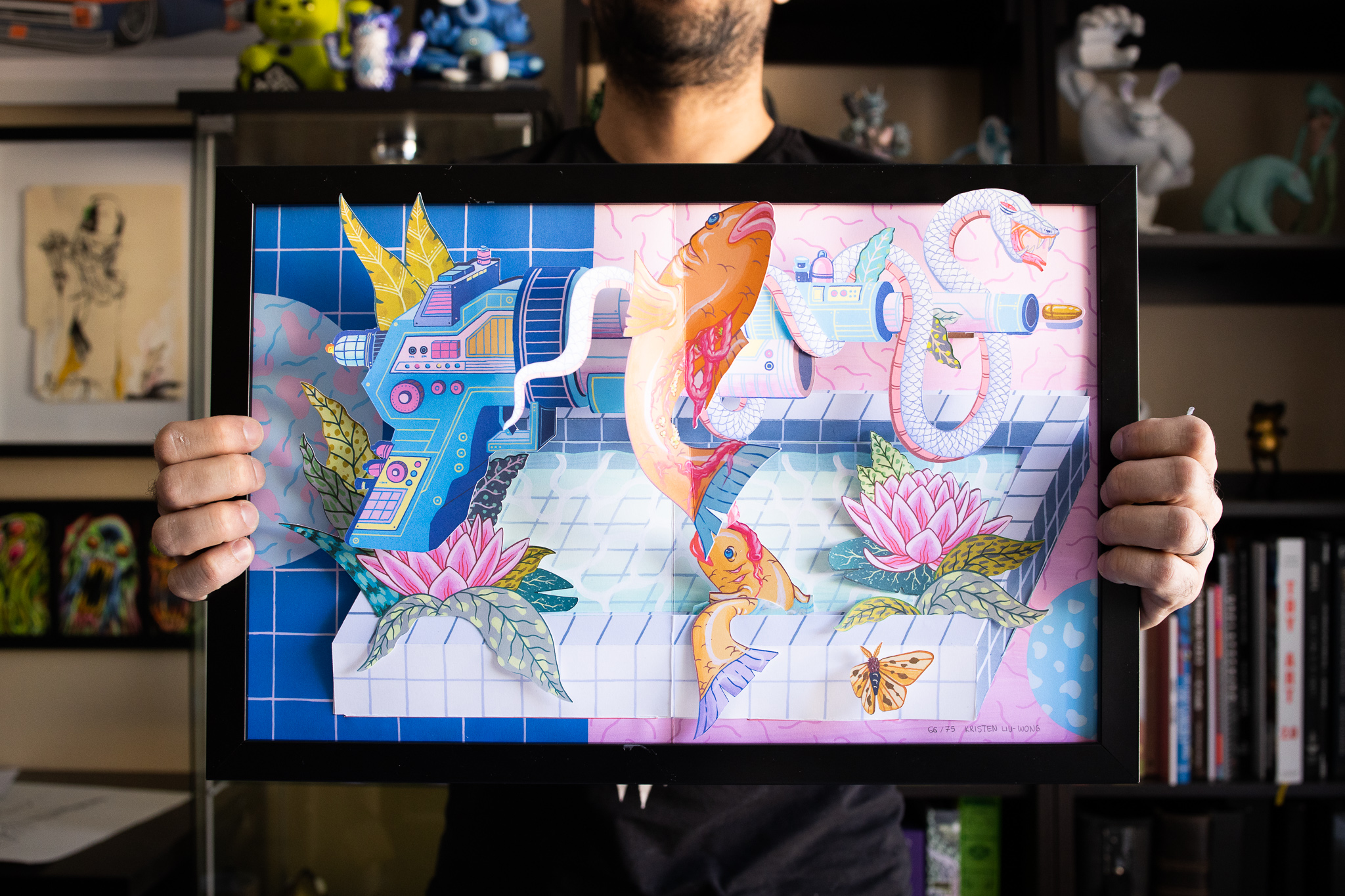 303: Do you favor certain styles of art over others? Why or why not?

RM: I guess I have my favorite artists and have been very lucky to be able to work with pretty much everyone I’ve wanted to. There definitely are artists that I don’t like for one reason or another, so they probably won’t get contacted about doing a pop-up book. After working with such varying types of artwork, I pretty much feel like I can make a pop up out of any artists’ work. I’ll figure it out. Some may not have enough detail to turn into a complex pop up like the ones in the books I’ve made, but that doesn’t mean it still can’t make for an effective pop-up.

303: Any artists you hope to collaborate with in the future?

RM: There’s a lot of stuff in the pipeline, and I’m really excited to be working on a book with Shag. His art is great and has gotten more complex over the years which will make for a fun pop up. Other artists that I‘d love to do something with are The London Police, Hueman, McBess, Herakut, Jermaine Rogers, Pejac, Nychos, Ashley Wood, Jen Stark, Alex Grey, Mars-1, Doze Green, Bonethrower, Jacob Bannon, Sam Flores, Anthony Lister, Jeremy Fish, Glenn Barr, Tara McPherson, James Jean and for sure Tristan Eaton.

303: Tell me about the book you’re most excited about releasing this year.

RM: The next book I’ve got coming out is something that’s been in the works for about three years and is very Colorado — the world’s first cannabis pop-up book. Titled Dimensional Cannabis, the book features six spreads relating to different aspects of cannabis culture — paraphernalia, anatomy, history, medical, cultivation and popular culture. Mike Giant is illustrating it with six paper engineers each doing one page, so each spread has its own unique style, as far as the paper engineering goes. Dimensional Cannabis will be available to pre-order soon and released toward the end of 2019.

303: This last question comes from our previous interviewee, Jasmine Lewis: If you could be any mythical creature what would it be and why?

RM: I would be a Sea Goat because a mermaid is not my style. Plus, who wouldn’t want to be part goat? Goats rule.