Even though Denver-born street artist Bimmer Torres is just under 30 years old, his full-time artistic career stretches back over a decade. His constantly-growing body of work now totals to approximately 200 pieces — including more than 100 murals. Denver’s walls and alleys have been Torres’ canvases since before RiNo was even called RiNo, and yet mostly, the spotlight hasn’t shone on Torres as one of the forerunners in the city’s burgeoning street art scene. But, that’s about to change because Torres and his murals are making Denver a better place.

Torres started tagging and practicing graffiti lettering at 15, when he started emulating friends and other figures he looked up to. “I liked the idea of having my name out there like that. I had this mentality at the time that I didn’t really care about anything else,” the artist explained. During class, Torres spent his time drawing graffiti style letters and words rather than focusing on the curriculum or the teacher. Like many (or all) graffiti writers before him, Torres became obsessed with the personalities of letters, and how, in his words, “the letters kind of battle each other” within a shared space.

Tagging and graffiti letters were the focal points of Torres’ life until his early 20s. “The risk of possible jail time, as well as some other things, stopped me from continuing,” he commented. “What really made the decision for me though was when I approached a business, legally, and asked ‘hey can I paint this [wall]?’ They said yes. And after that, I started asking ‘hey can I paint this wall and can you pay me to do it?’ And they said yes to that, too.” 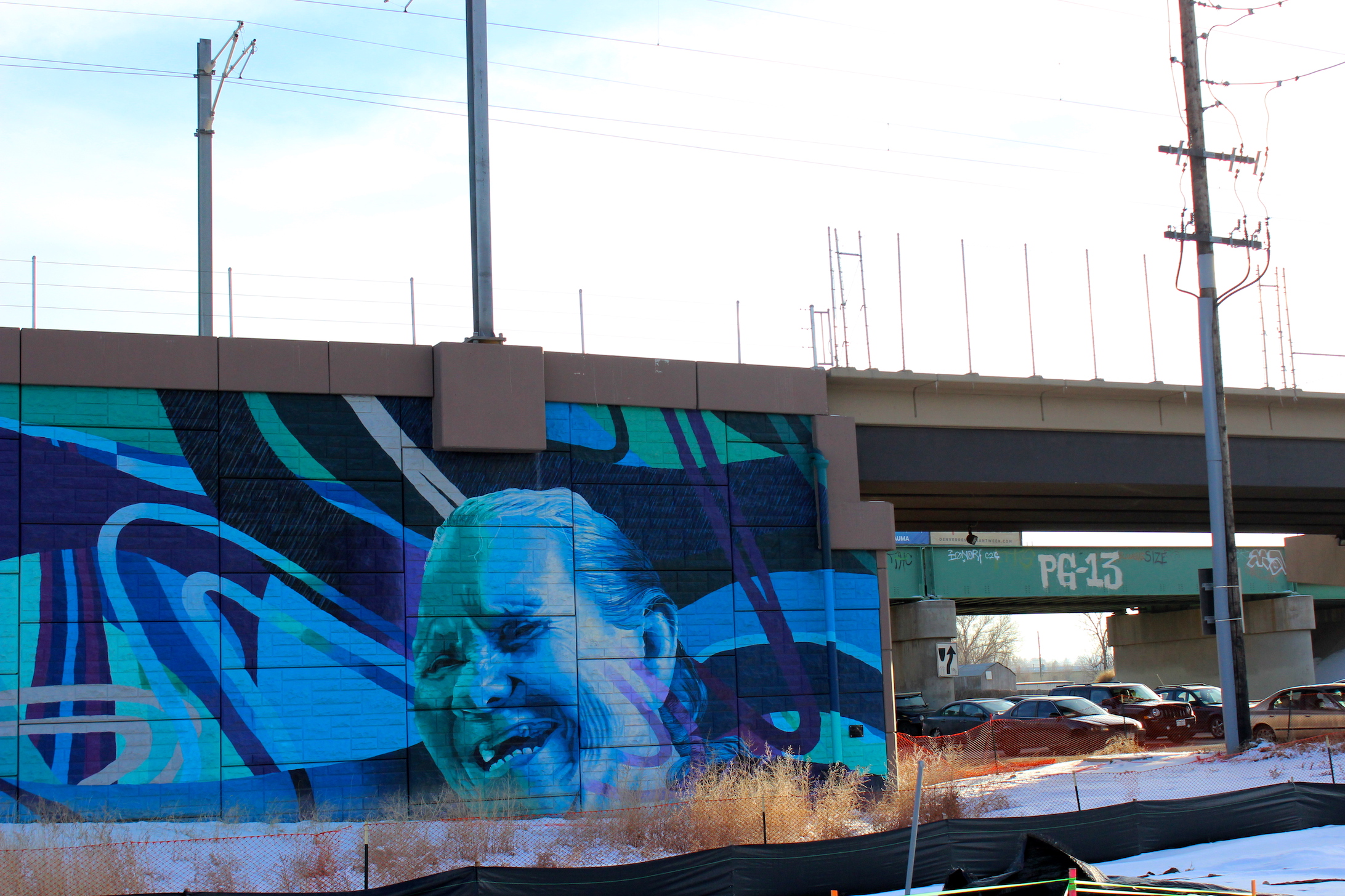 Mural by Bimmer Torres at 60th and Federal. Photo by Cori Anderson

That first legal wall was located near Santa Fe Drive in a building now occupied by Denver Open Media. When Torres painted it, the building housed the Microbusiness Development Center (MDC). Torres had a connection with MDC because while he was attending West High School, a business teacher assigned his class the task of creating a product. Torres paired up with a friend, Ratha Sok, and the duo thought up, designed and fabricated a line of graffiti hats, branded under the label 2Kool. The MDC hosted a marketplace, and 2Kool set up a booth to sell their product as one of the vendors. That opportunity not only led to 2Kool continuing on as a brand and business for a few years beyond that class and marketplace, but it ultimately provided Torres and Sok launching pads for their artistic careers.

Now, many years later, both Torres and Sok are painting murals and street art in Denver, but their paths have deviated away from the branding and swag of 2Kool. Torres is a professional now, and an artist who operates within certain guidelines. Though the days of tagging and wanting to see his name on the streets have passed, Torres’ desire to leave an imprint on society remains. Where there was teenage angst, now there is the shrewd eye of a businessman, an entrepreneur and an artist who can put food on the table. 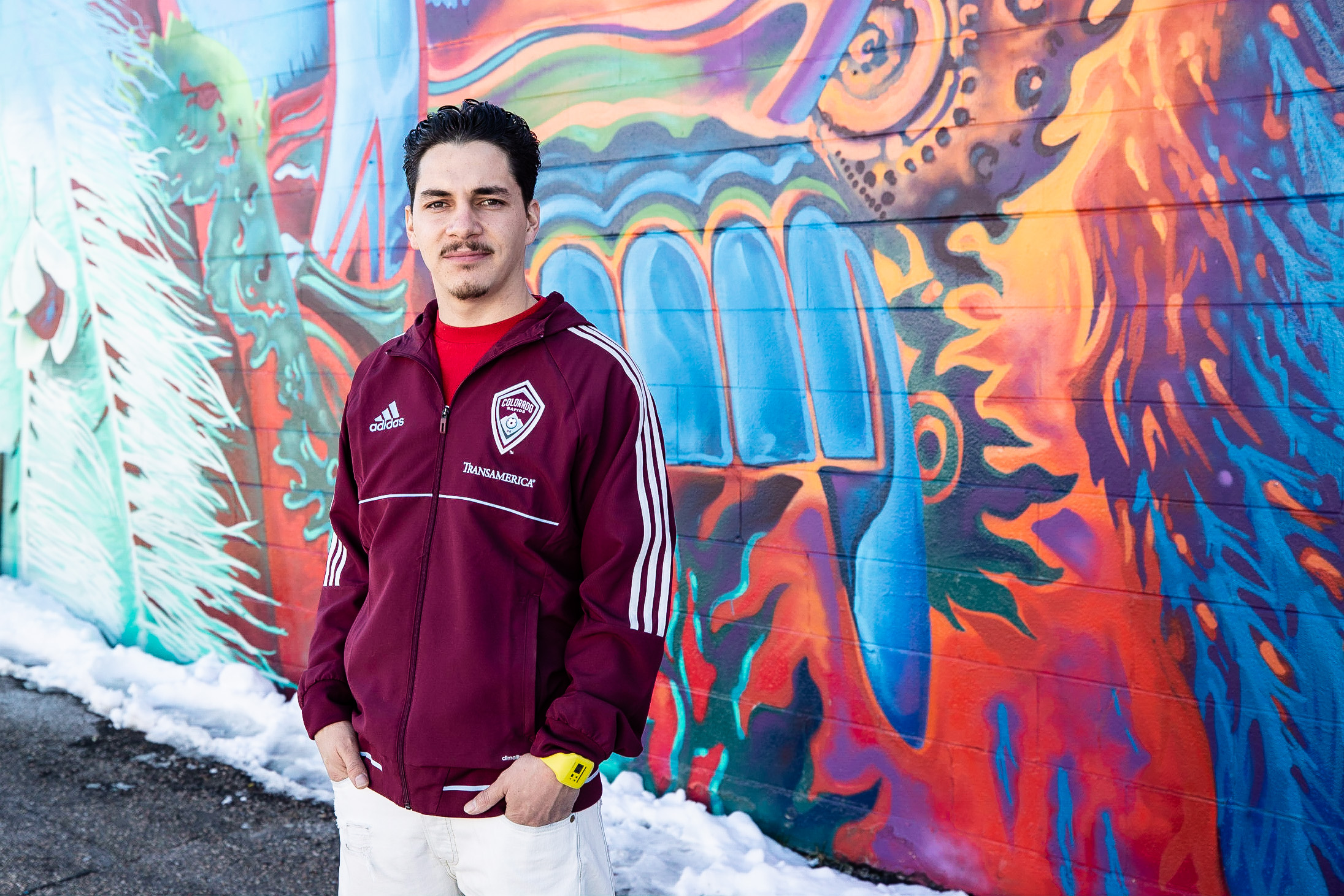 But there’s something else behind Torres’ murals in Denver. Some of them are created with groups from youth detention centers. This program was developed by Martin Friedman — a restorative community justice client manager and parole officer. It pairs certain “students” who are committed to bettering their situation while they are serving time and after with activities to teach them skills and acquaint them with the responsibilities of being a beneficial member of a community.

Torres meets with the youth at the detention centers to conceptualize the idea behind a mural with them, gathering their input and feedback. He then sketches a cohesive design on a wall and denotes which colors go in which areas, like a paint-by-numbers game. Friedman preps the students before they arrive at the wall to assist Torres. “I’m all about framework and processing, and Bimmer teaches them to paint. We make a great team because we make up for each other’s deficits and play into each other’s strengths,” Friedman commented. He added, “We’re going to build a community one mural at a time.”

The entire experience is designed to provide something tangible for the students to relate to, and Torres’ graffiti background sets him up as a perfect mentor. He explained, “I don’t tell them to stop, I tell them to take a look at what they’re doing, look forward at the consequences. There’s plenty of people who never stopped, did [something] illegally, and are successful now. So I can’t tell these kids to stop. But I will definitely advise them on how to spray paint positively. Approach businesses, bring them a budget, bring them a sketch. I just make it a point not to tell them to stop, on principle.” The locations that Torres has instructed students from detention centers include the Swansea Recreation Center, at the corner of 31st and Downing, on the Montessori Family Star school at 22nd and Federal and two at Gilliam Youth Services Center. 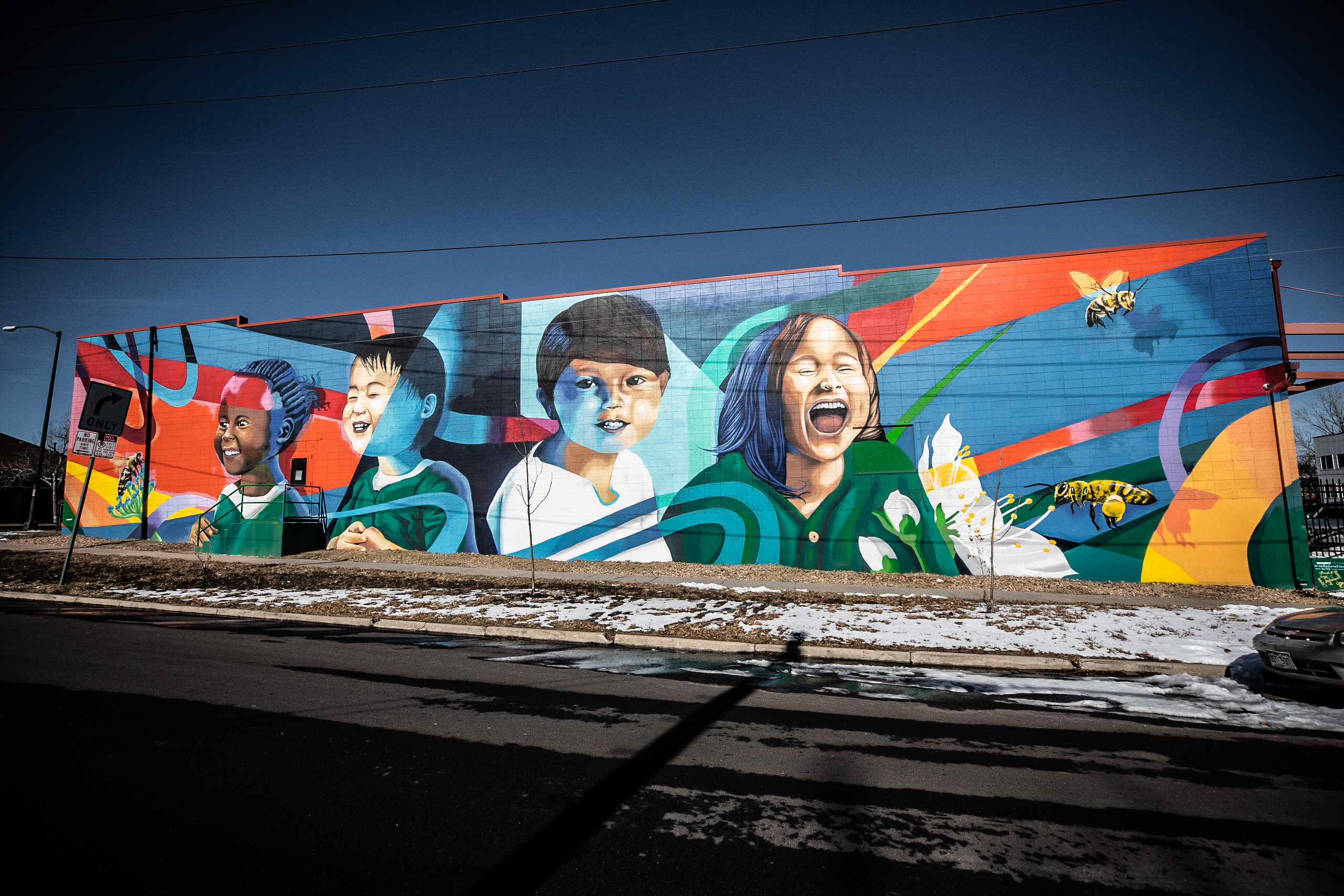 Located at 22nd and Federal, painted by Torres with the detention center youth and Martin Friedman.

Even in the days of 2Kool and the West High School Mural Club (a club that Sok founded and grew during his time at the high school), Torres proved to be an autodidact and individualist. His ability to teach himself just about any skill has continued throughout his 20s, leading him on a path many try and fail at — the life of a comfortable full-time artist. It also informs his process, where instead of staying stagnantly in one medium or style, Torres is always reinventing, trying new techniques — and most recently, trying his hand at 3D sculptures.

Living under the credos of his own advice, to “spray paint positively,” Torres’ decision to pursue public art and his collaborations with Friedman and the detention centers have paid off. Many of his murals are funded through grants, like the Urban Arts Fund and Public Art One Percent. Sometimes Torres applies for 10 or 15 grants and only receives one. Sometimes he doesn’t have time to apply for more than he is awarded. Either way, he carries himself with the ease and confidence of someone who doesn’t let failure phase him. 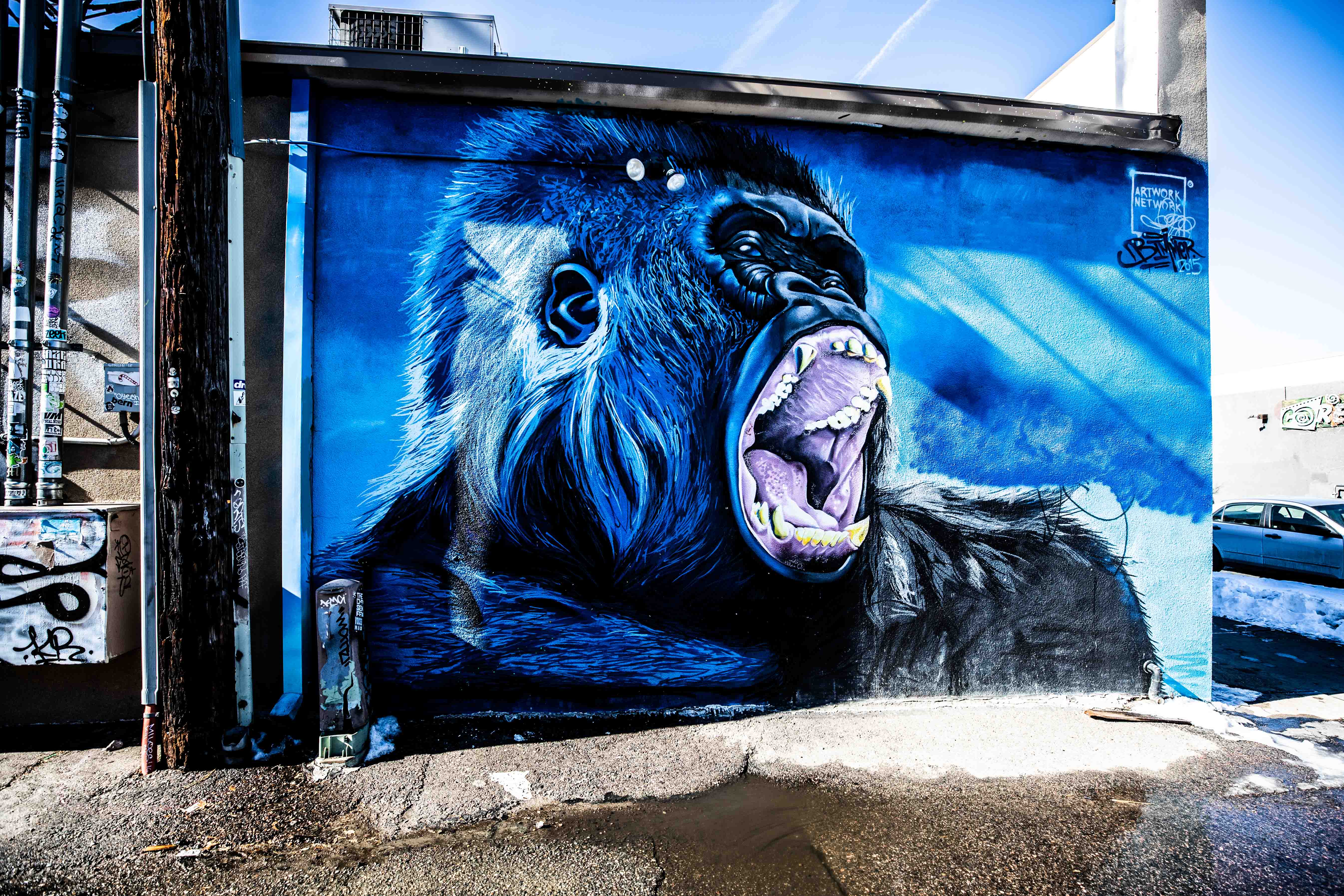 Located in the alley behind Artwork Network at Santa Fe and 9th.

Although all artists must deal with certain levels of competition, self-doubt and criticism within their own artistic communities, the distinction between graffiti writers and street artists is a particularly delicate — and touchy — one. Torres made a name for himself in the Denver graffiti scene long before he started painting murals, and painting murals for a profit (what most consider “street art”). Because he spent the time and met the right people during those years, his murals now are largely left unmarred by taggers and graffiti writers. Occasionally (with the older murals), Torres will hear about or find some sort of vandalism. But, as he explained, “I feel like since my roots are in graffiti, I get to know a lot of people who are doing both graffiti and mural art and they have found that my work is worthy of respect. I think that’s one of the main reasons I don’t get tagged as much as some other artists.” He added, “I also bring high-quality to my murals so it’s hard to tag that in my opinion.”

With each new mural Torres paints, he is validated for his decisions to pursue a life of street art. Denver is fortunate enough to have a shining beacon of hope in Torres and his art. A beacon that isn’t shining for the artistic elite, or the high-end collectors, or the real estate developers — but for the youth in detention centers, the people who take public transportation, the children at schools and the keen observers on the streets.

Torres will be painting at various times and locations this summer. Keep up with him on his Instagram. Or through his website.

All photography by Heather Fairchild, unless otherwise noted.