–
Politics and street art are no strangers to each other. But, as murals pop up ever more frequently in Denver, the political side of painting the streets has lessened, perhaps because commissions are on the line. So when one does pop up, people start talking about it.

At the end of September, Denver artist Scot LeFavor painted one such piece — with just enough detail to let you know what his opinion was — and many in the city responded with fervor. For LeFavor, being political isn’t new — much of his repertoire includes or alludes to political statements or beliefs — but this mural felt more political because it was especially relevant when he painted it, and remains relevant now. At first, it pictured Dr. Christine Blasey Ford on the left, her hand held in the air to testify, and Brett Kavanaugh on the right, looking rather nervous. They were separated by a bold black line. “This is not justice,” it read beneath the stenciled images of the two subjects. 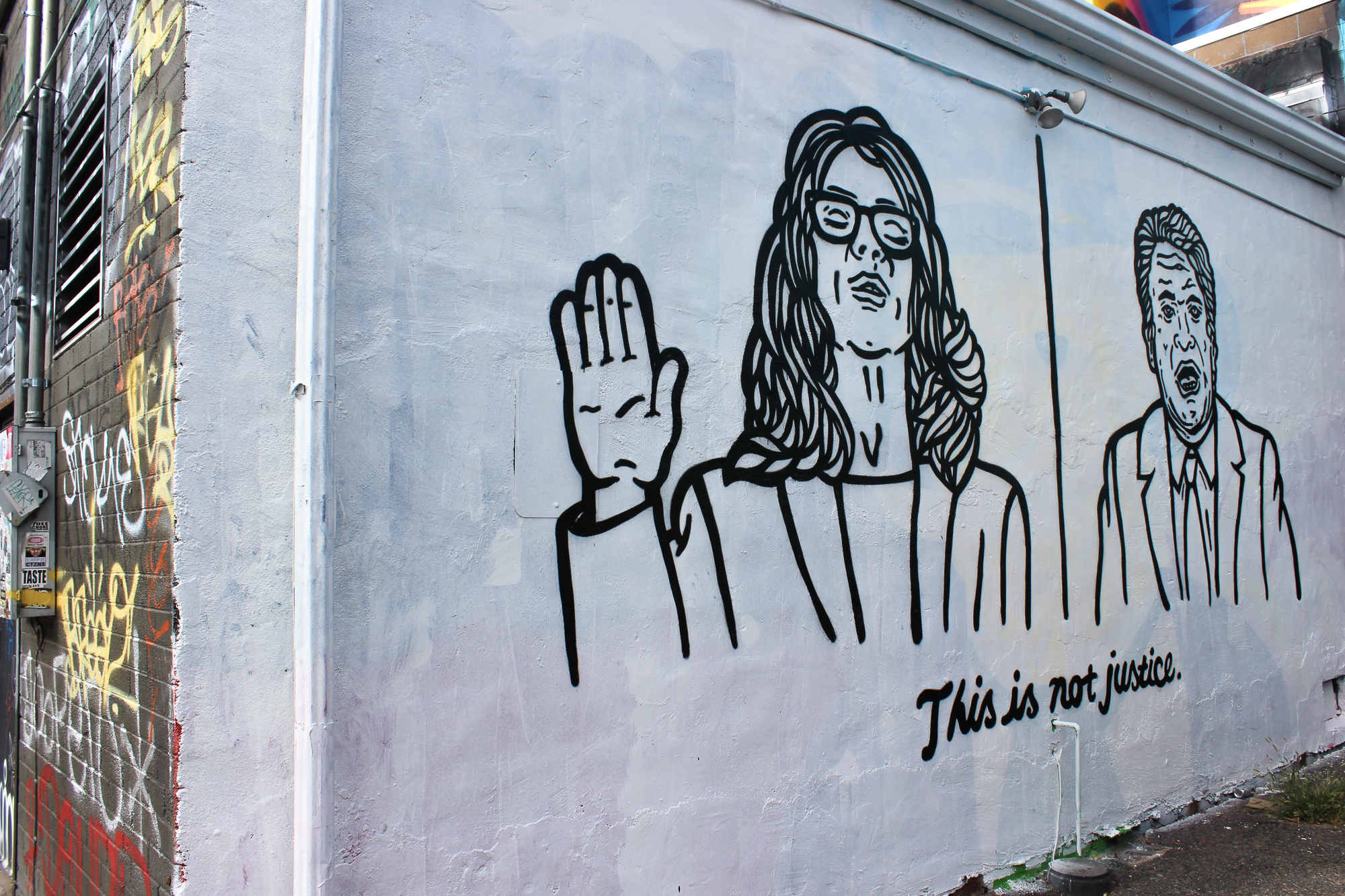 One of the interesting notes about this piece, aside from the piece itself, is how LeFavor made the decision to paint it. He had already started on a different mural on the same wall days prior but found himself unsatisfied with it. That’s why, when you get close, the white background looks a little splotchy and there are still hints of other colors at the edges. On Friday, September 28, only a day after Ford and Kavanaugh testified before the Senate Judiciary Committee, LeFavor decided to spend an all-nighter on the wall, covering the first mural with the one described above. Whether he realized it or not, that act alone made the new piece more political because it showed the immediacy at which he wanted to take a stand. Since he hadn’t planned on doing it to begin with, the overnight stencil illustrated not only an ability on LeFavor’s part to improvise and create with speed, but also a window into how LeFavor feeds on current events.

But after the announcement — only a week later — that Kavanaugh would become Judge Kavanaugh, LeFavor took another drastic action. He painted over Dr. Ford and part of the saying at the bottom, changing the sentence to “no justice” instead. “I had really hoped it would go the other way,” LeFavor lamented. “Obviously, this hurt to do.” 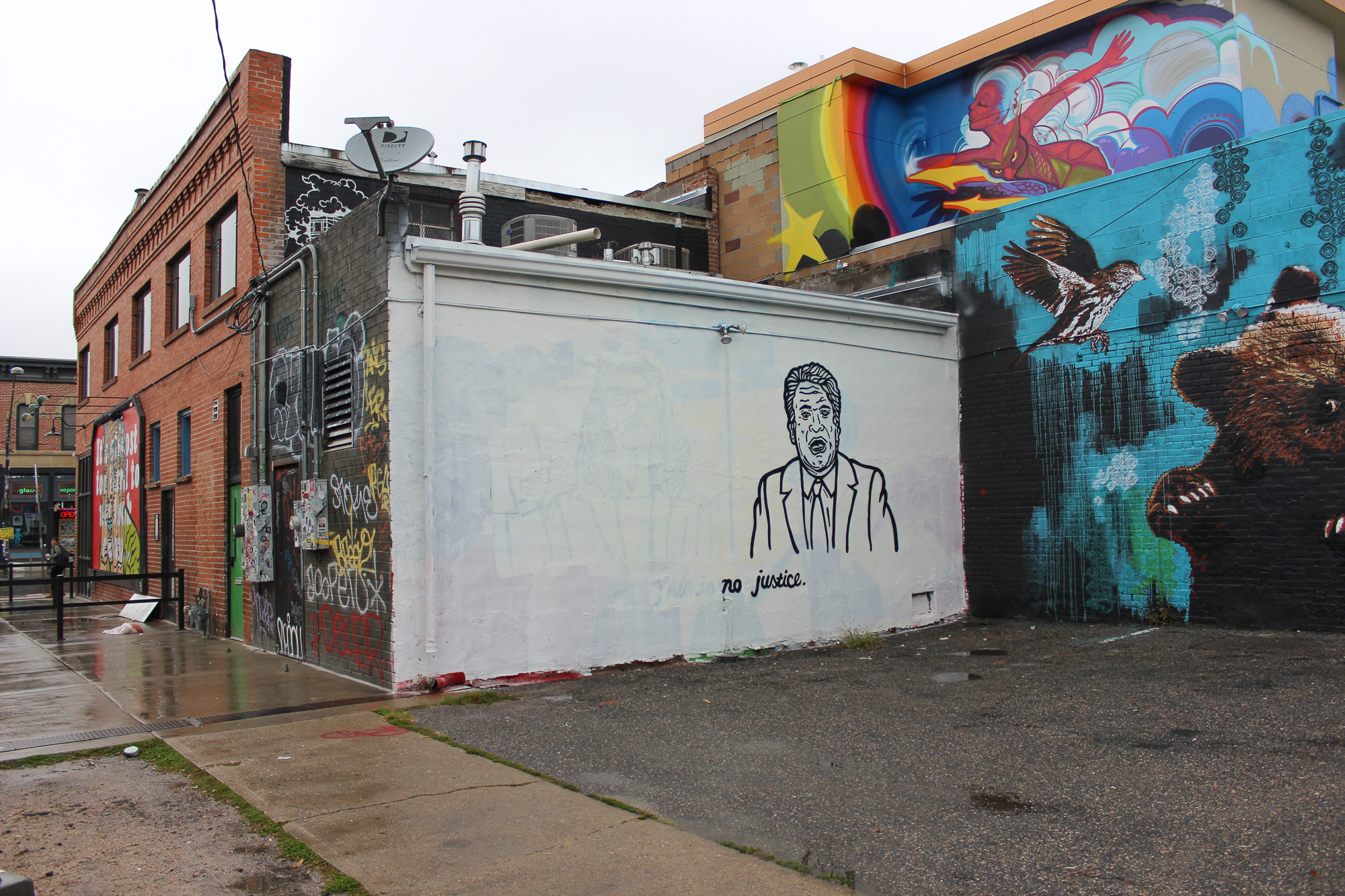 But why do other Denver street artists avoid politics? Especially in the last few years, the Mile High City hasn’t shied away from massive protests and other displays of resistance. “I think Denver weighs highly on the side of the left so it’s almost like preaching to the choir, you know?” LeFavor explained, speaking about the lack in other political street art in the city. “There are definitely issues that our city experiences but perhaps not as complicated as bigger cities. That and also I think people would rather see pretty things that are easier on the eyes and mind than some contentious political work here. Maybe. Anyway, my homie GAMMA has been doing some amazing national/local political work in the city for years.”

Other murals and prints of LeFavor’s have attracted attention from the community at large, including the first one he created in 2006. At that time, the building he put the mural on was the legendary Cold Crush at 27th and Larimer in RiNo. LeFavor and some of his friends from Cypher13 in Boulder traveled to Denver and wheatpasted an image up with a JFK quote on it. The quote? “A man may die, nations may rise and fall, but an idea lives on.” Although that building is no longer Cold Crush, RiNo has drastically changed in the last 12 years and the political climate is rather worrisome, that same wall now holds a mural painted by LeFavor that embodies his same need to start a conversation. He painted it during CRUSH at the beginning of September this year, just a few weeks before the Kavanaugh/Ford mural. 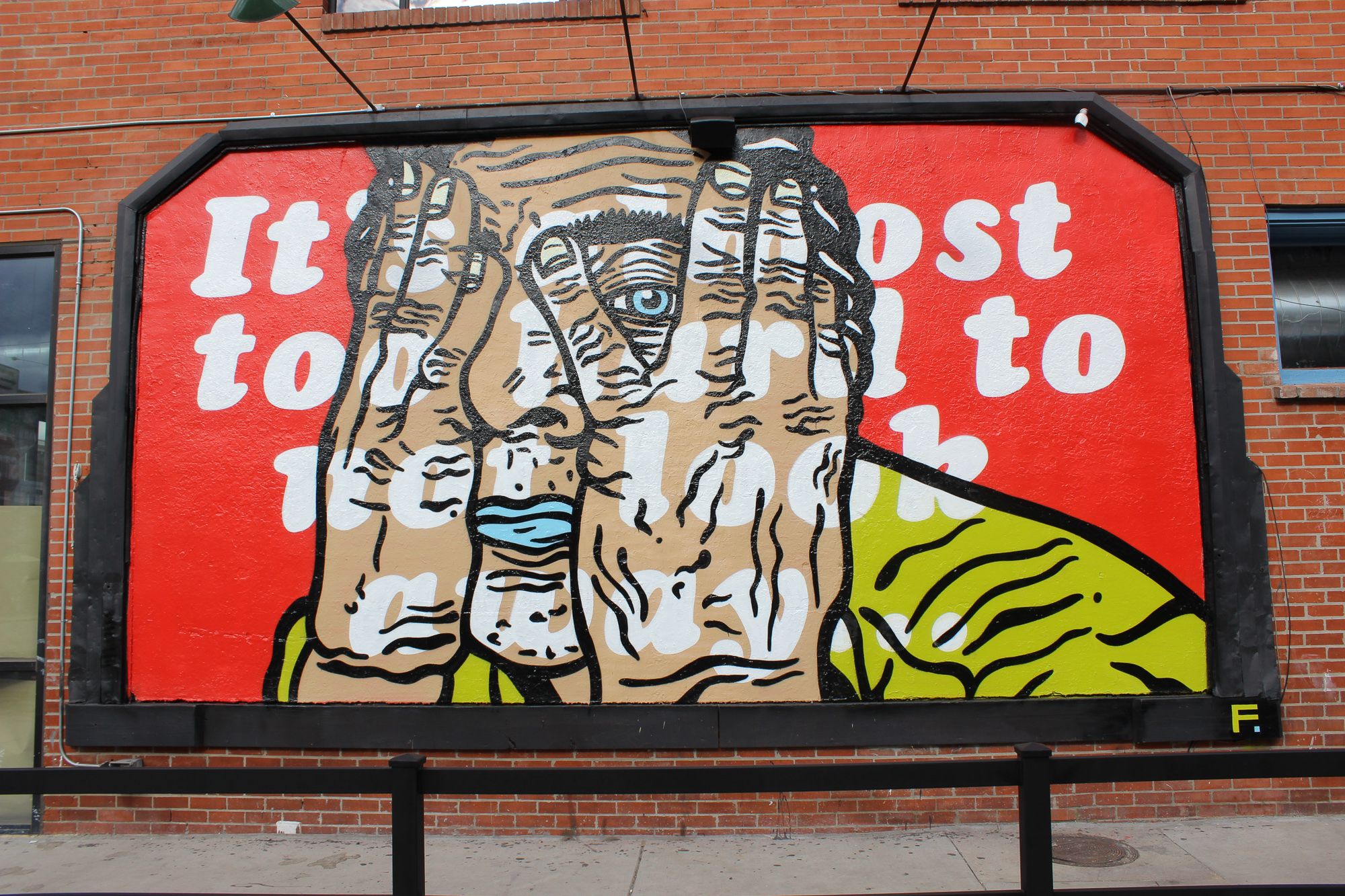 Though this piece is more in line with his humorous, pop-art inspired style, it is still steeped in messaging. It’s just around the corner from the justice one — and on the same building — yet bursts with primary colors and instead of showing the words plain and simple at the bottom, it features a superimposed quote that fills the frame. The quote reads “it’s almost too hard to not look away.” Peeking through two of his fingers with one eye, while the rest of his hands cover his face and the other eye, the subject says the same thing the quote does, only in a nonverbal form of communication. “The piece is about the general anxiety and frustration from not only our national politics but our neighborhood politics as well,” LeFavor commented. The quote and attitude reflect the feeling that national and international politics are disastrous and yet hypnotizing, and much like a train wreck or car accident, we cannot help but keep our gaze affixed on the crisis.

That ability to visualize how politics can affect us is a remarkable feat LeFavor achieves. Whether it’s the more elusive designs, like the colorful one pictured above, or ones that smack us in the face with their opinions, his creations are head-turning because they make us think. And not in the abstract-contemporary-art way, where viewers have to guess at large and ethereal conceptualizations, but in the “how do I feel about that particular issue?” kind of way. Ultimately, LeFavor’s art in Denver may be like preaching to a choir, but when the choir sings the message (in the form of sharing his art) as well, there is a good chance someone outside the “church” might take note.

Don’t worry if you missed the transformation of LeFavor’s justice mural, either. We can all expect more politically-motivated street art from him in the future. In the meantime, his one piece of advice to his fans is — “please, go vote.”