Your Game Plan For GABF This Weekend

The Great American Beer Festival kicked off last night for its 37th year. Along with the usual suspects of beer-themed costumes, a bagpipe procession and general drunken debauchery, the annual event had something new up its sleeve. Over 100,000 square feet of space, along with a new footprint, made its debut. Some say this is why the highly popular festival didn’t sell out at its normal record-breaking pace due to raised ticket quotas. That makes sense as the Thursday session felt packed even with the added space. With high attendance expected for the weekend sessions, we’re here to help you make a game plan so you don’t miss out. 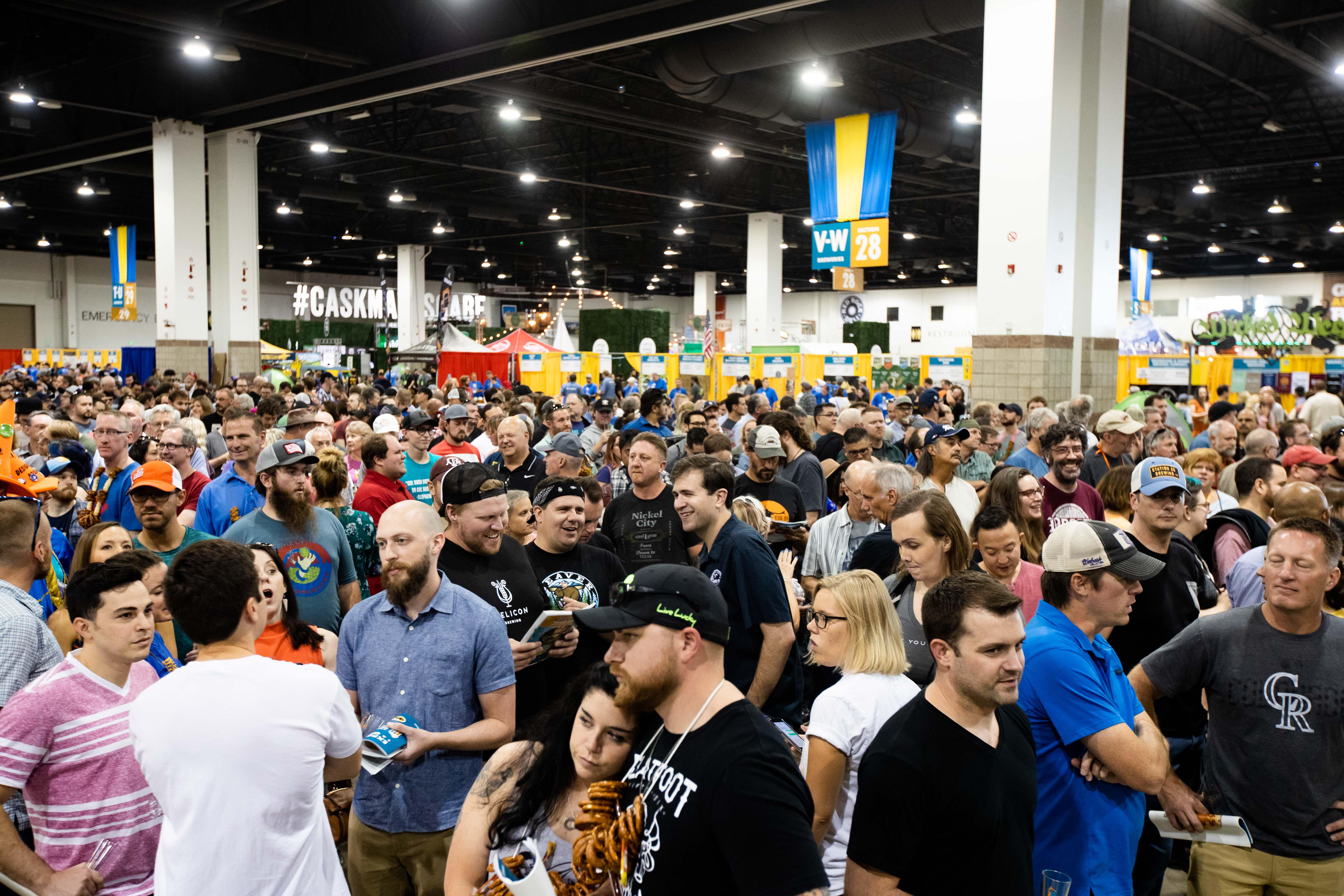 The festival has a new layout this year. Instead of breaking it down by regions, the breweries are listed alphabetically. But there’s a catch — it’s not just A to Z, front to back. It’s broken into two sections with the “Meet The Brewer” side having its own alphabetized order. That section is located towards the left side of the convention center when you enter from the ticket holders entrance. We understand why the festival changed the layout from being organized by region — but we have to say, it was still hard to find a desired brewery and we did miss wandering around different regions to see what area delights we could find. So more than ever, you should download the app and have the layout ready. Pro tip: when telling people where to meet you, skip the letter and just tell them the section number. Since there aren’t duplicates section nunbers, it’s way easier to find and you’ll avoid the confusion by telling someone to meet you in “B” and then later realizing there are two different B sections (one in Meet the Brewer and one in the general area). So, key takeaway — study the map and get your bearings before diving in.

Where to Head First

Once you know the lay of the land — you’ll need to prioritize on what breweries to hit up first. We have a more fleshed out list of “beers to hunt down”, but after last night we have a few additions as well as some reminders. First, head to Weldwerks. The Greeley-born brewery has amassed a big fandom since the last GABF and is already drawing crowds. They brought a huge lineup to represent its 100 beers brewed in the last year (yes, 100). Even with an arsenal of beers, favorites such as the Peanut Butter Cup Medianoche are going to go fast — so make a beeline to that brewery from the entrance. It’s fairly close to where you’ll come in, so if you’re quick you may not have to wait in a huge line. There are a few more breweries that had huge lines and kicked kegs you’ll need to check out next including Great Notion, More and New Glarus. More, in particular, kicked almost all of its kegs halfway through the fest, so if they are on your list you may want to make them stop number 2. We recommend getting the Henna: Swirl, “a chocolate and vanilla imperial stout that tastes like old fashion vanilla ice cream soaked in decadent chocolate syrup.”

If you’re smart enough to have purchased a ticket to Paired (seriously, it’s worth it), there are some major standouts to not miss. First stop, grab a grilled oyster and a spicy “seafood pan roast” from Sam Talbot and then head straight to Mercantile’s booth where, if you’re lucky, you might meet the James Beard Award-winning chef himself: Alex Seidel. Dishing out a simple but insanely delicious chicken sausage slider — Seidel lives up to the hype. Then, even if you’re not ready for dessert, you must head straight to Arcana‘s spot (located diagonally to Mercantile’s booth in the far right-hand corner). This was hands down the best pairing of the night, and maybe the best beer and food pairing I’ve ever had (yes, it’s that good — but you have to do it right). The bite consists of a slightly savory and spicy meringue made with guajillo chiles, topped with a squash puree, fried dulse (kind of like seaweed) and sesame seeds. It’s good on its own, but if you pop one into your mouth and take a sip of Rahr & Son’s Drunken Santa (a spiced English ale aged in Bourbon barrels), the beer will dissolve the meringue and elevate all the flavors. The result is a spicy treat that hits all the right fall flavors. 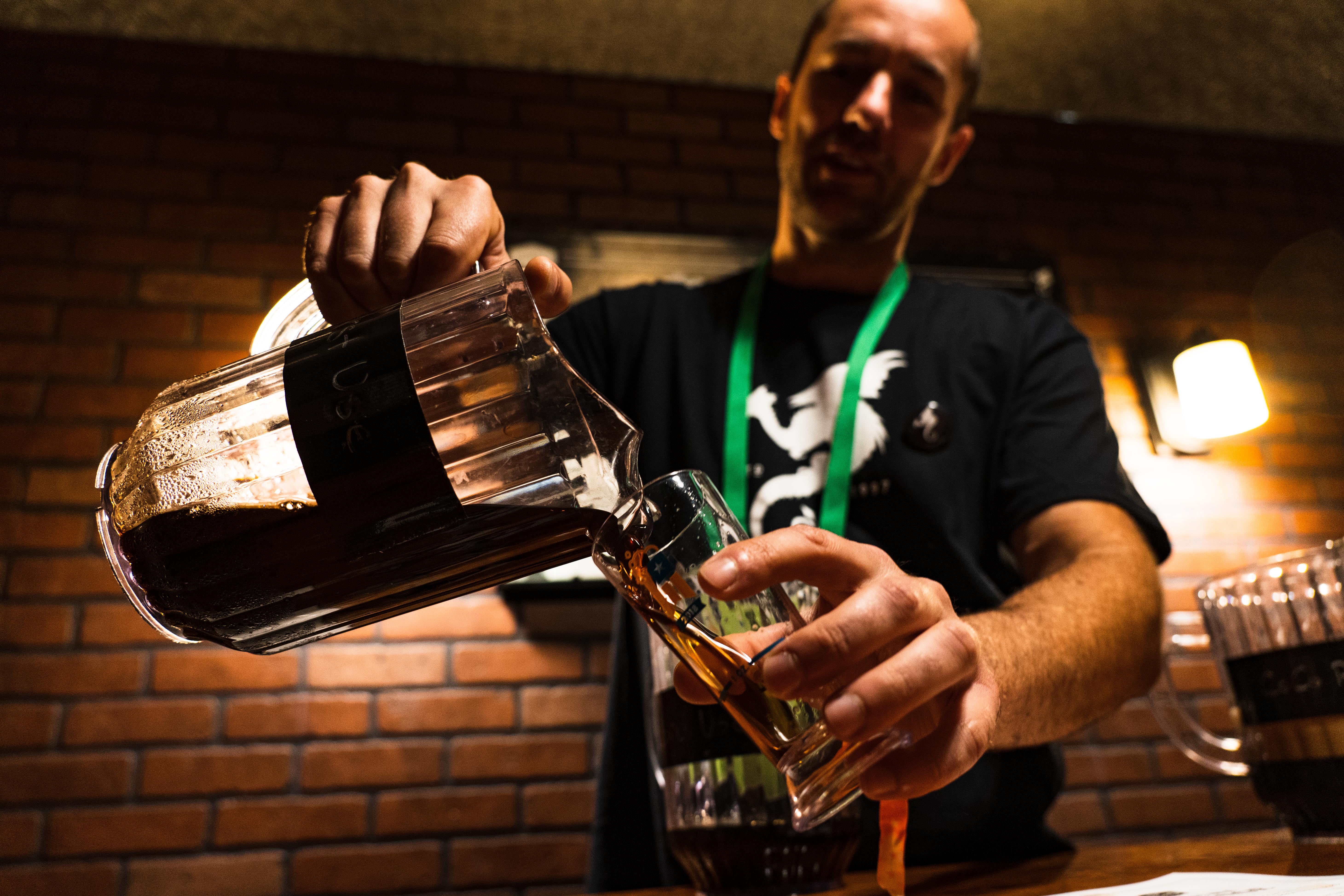 Once you’ve knocked out all your must-do’s, there are a few areas worth exploring. First, we stumbled upon a secret “speakeasy” over at New Holland. Attached to its normal pouring station, the Michigan brewery erected a faux brick pub where they are pouring special variations of its famous Dragon’s Milk. They only let groups of four in at a time, so you’ll have to stand in line — but if you love a good stout (including an intense double rum coconut edition), you won’t want to miss it. After you finish up the speakeasy, check out Ology Brewing out of Tallahassee. The line won’t be long, and there’s nothing fancy about the booth but it’s definitely a breakout brewery worth trying (shoutout to our friends at PorchDrinking.com for the recommendation). Give the Juice Lab a try and you’ll see what we mean. To finish out the night, don’t forget to stop by the newest activation — Jameson’s Caskmates Barrel Aged Beer Garden. The huge new spot is featuring only (you guessed it) barrel aged beers meaning the ABV is going to be higher. So if you’re still feeling like you can put down a few — head there to wrap up.

With one day under its belt, GABF is already turning out to be another satisfying year. It may take you a few extra minutes to decipher the new layout, but we welcome the effort. Competition is rising (we’re looking at you, Shelton Brothers), and it’s important that GABF tries to innovate in order to stay on top. We hope to see more of this from the annual event in the coming years and encourage them to continue to think big.

All photography by Brittany Werges, unless otherwise noted.