Taos Vortex — Meow Wolf’s first music festival — lit up the little New Mexico town this past weekend, at times with the creative enthusiasm we have come to expect from the artist collective, and at others in a less than ideal way. With only two days in a central public park in Taos, Meow Wolf definitely set ambitious goals for their first festival. And though the lineup of musical acts was impressive — with highly memorable performances from The Flaming Lips and dance tent DJ Matthew Dear — the overall execution and organization of the event, as well as their artistic installations, will need more work if the festival will continue successfully and with true Meow Wolf gusto in the future.

Meow Wolf — since the opening of its first permanent installation a few years ago — has become synonymous with immersive art experiences. When they announced their first foray into the music festival circuit a few months ago, it was with bated breath that the most hardcore Meow Wolf fans waited to purchase tickets. Music is already an integral part of the permanent Meow Wolf exhibit in Santa Fe, with weekly concerts occurring inside the installation, so it seemed natural for the artist collective to put on an event like Taos Vortex.

READ: Why Meow Wolf is Worth the Hype (And the 6 Hour Drive)

Friday started with wompy dubstep from the Shake Monster “stage” — an area sectioned off from the main festival grounds. Then the main stage started at 5 p.m. with the chill vibes of Poolside — a Los Angeles-based duo who makes you actually want to hang out by a pool while you listen. The night continued on the main stage with an hour set from Emancipator Ensemble followed by a two-hour set from Thievery Corporation. Both acts garner massive crowds in Colorado — each has enjoyed headlining spots at Red Rocks — and yet Kit Carson Park was less than half full. We aren’t complaining though — since it gave the attendees plenty of dancing room and a decent view, no matter where they stood. 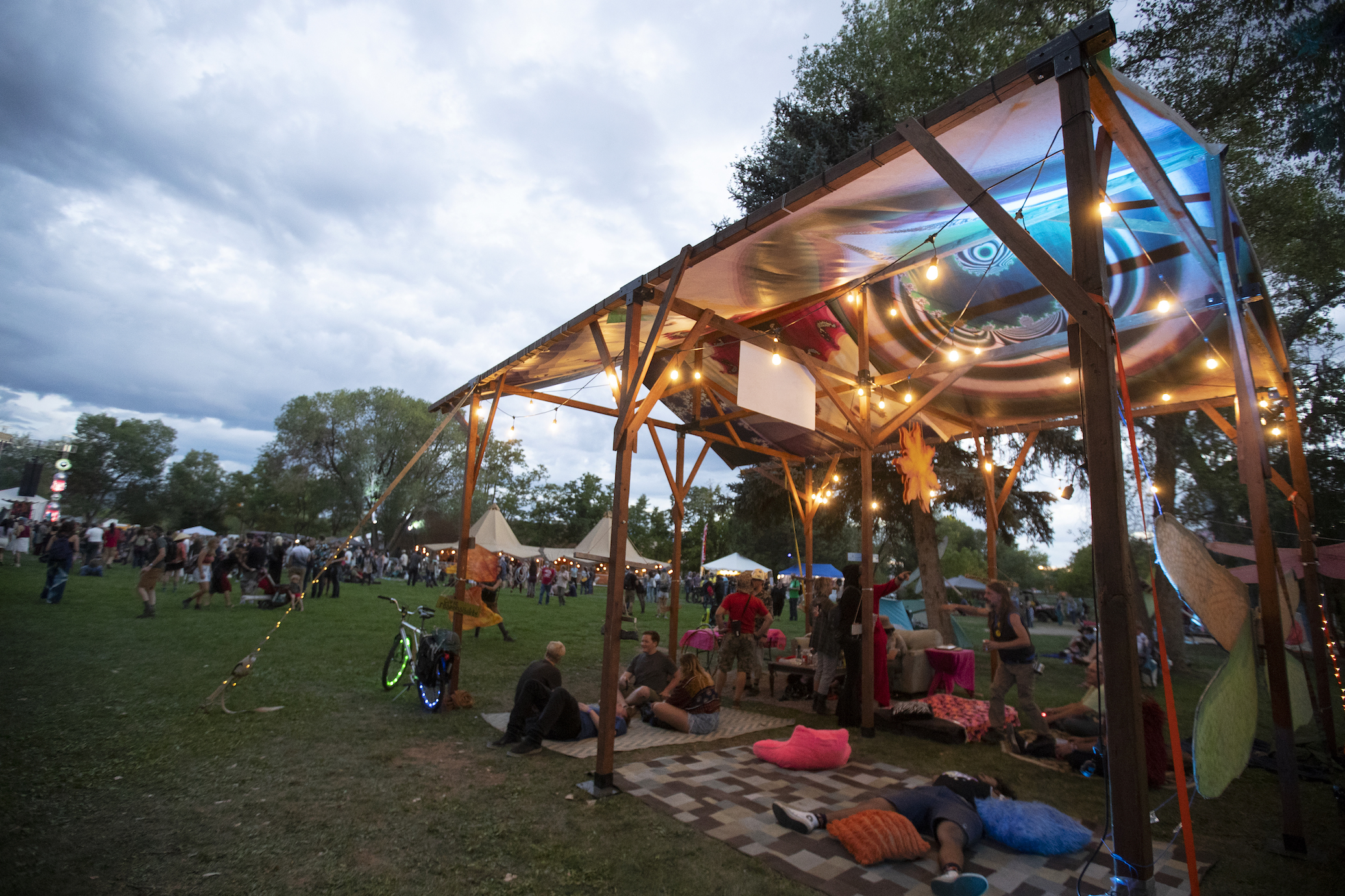 Though camping was available (and glamping for the not-so-outdoorsy), the rest of the festival grounds were separated and day pass or weekend-pass holders without camping passes were not let into the camping area. The area open to everyone included a handful of food trucks, a kombucha-on-tap tent, some vendors selling clothing, a mobile-apothecary and some scattered art installations.

One of the most impressive installations was a pyramid on metal stilts, lit from within at night and externally by day, created by Dicapria. Composed of separate panels of double-sided glass, the colorful menagerie of patterns was entirely made of gummy bears. From far away, the gummy bears were unnoticeable and instead the symbols and overall design was compelling. It attracted people from all angles, asking them to step under the bottom ledge and peek inside. In this act of gathering, the gummy bear pyramid was both a joke and a serious place for contemplation. After stepping inside multiple times, only more questions were raised — will the gummy bears melt? Why was one gummy bear missing from the middle? How long did it take to collect all the different colors?

Aside from the smaller artistic touches — like different colored shade tarps and huge dragonflies hanging in the trees — the other installations were spread out a little awkwardly. Instead of choosing one area to really dive into art, each piece was separated from the rest by enough distance that it seemed to intimidate people from exploring and enjoying them. There was a seven-eyed jaguar head, where you could crawl into the mouth and chill inside, lying on a plush layer of pillows. And there were geometric shadow boxes that cast colored shadows of different shapes around them over at the Shake Monster area, along with a portable version of Meow Wolf’s famous Laser Harp. In their own right, each installation was interactive and interesting, but altogether it felt fragmented and was limited by the number of people that could interact at any given time.

During the main stage shows, a giant gorilla or yeti-like-creature was puppeteered from behind and a two-headed peacock with illuminated “feathers” that reached over 10 feet high and attracted many iPhone photos. Overall though, the art experiences were lackluster — that is, for a Meow Wolf event. For any other first-time festival organizer, expectations would have been lower, but we are talking about Meow Wolf here — the ones sweeping the nation with their totally immersive and interactive art extravaganzas. 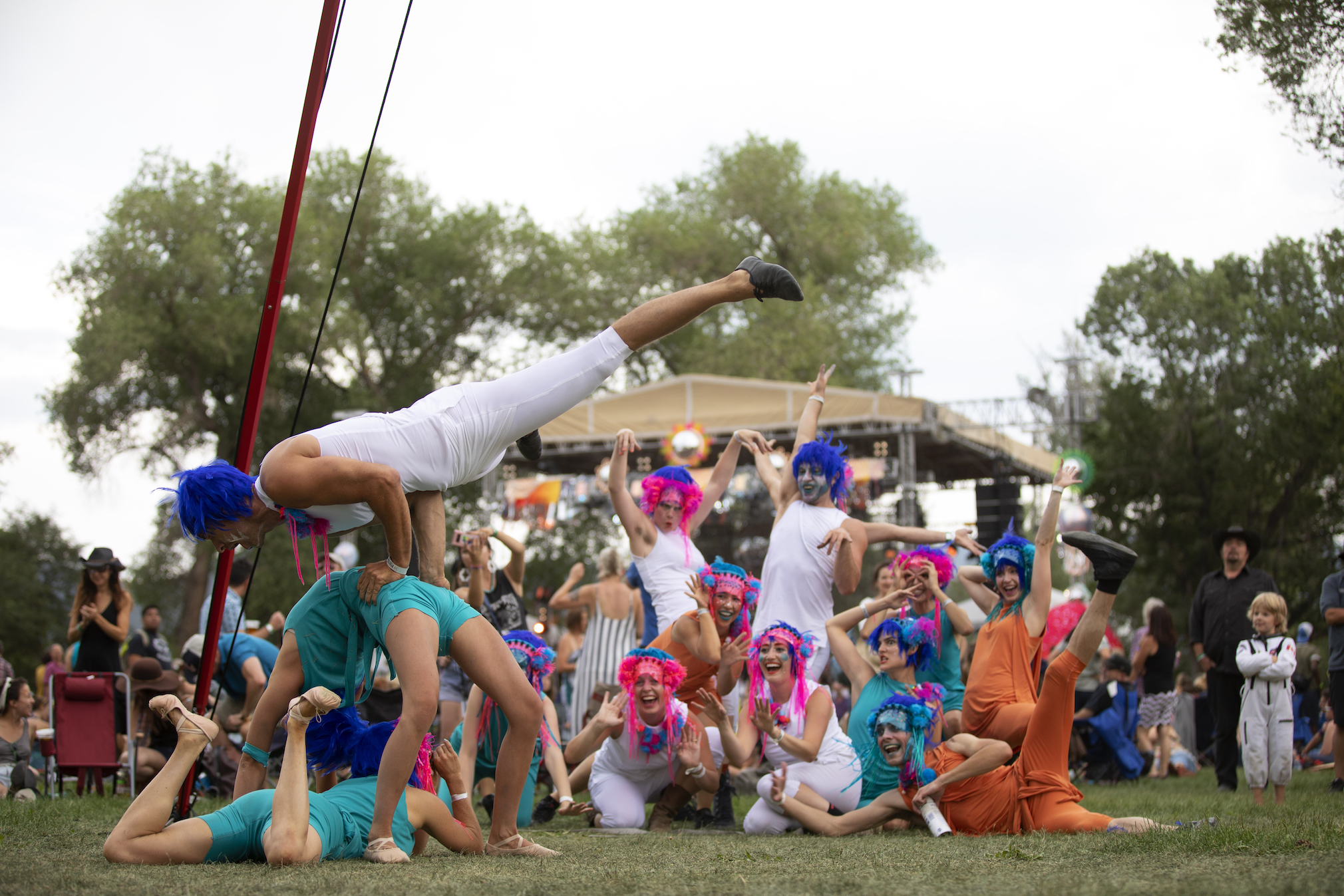 The other snag in the festival came on Friday after Thievery Corporation ended their set when attendees who had exited (reentry was allowed, according to the Taos Vortex website) wanted to come back in for the “dance tent” DJ sessions. The dance tent cost ticket holders extra and offered them three hours inside a pop-up tent with two DJs — Cashmere Cat and The Librarian on that first night. Security personnel refused to let anyone back in, dance tent wristband or not.

Saturday, thankfully, was a different experience altogether. Miscommunications about wristbands, security and other factors were mostly worked out and the crowd had doubled in size, nearly filling Kit Carson when the first main stage headliner, Washed Out took the stage. Aerialists twisted and flew through the air on a portable apparatus during the chillwave set by the Georgia-based producer, clad in costume fitting for a Meow Wolf multiverse. Dr. Dog took the stage after Washed Out, changing up the sound from relaxed synth-pop to indie-rock. As the sun started to set, Dr. Dog brought the crowd on a low-key journey, playing “Heart it Races” as the perfect denouement.

When darkness settled in and the art installations came alive, The Flaming Lips took over the festival. Known for their psychedelic antics, complicated stage sets and spacey sound, the band provided a buffet of sensory stimulation to a crowd who (it seemed) had only shown up for them. They played a nice variety of old and newer songs and satiated the fans with a loose version of “Do You Realize?” Frontman Wayne Coyne danced with various props, enhancing the light show behind him and in a way, conducting the band. At the end, he held up an inflated balloon reading “Fuck Yeah Taos Vortex” — a sentiment that only felt true on that second night. 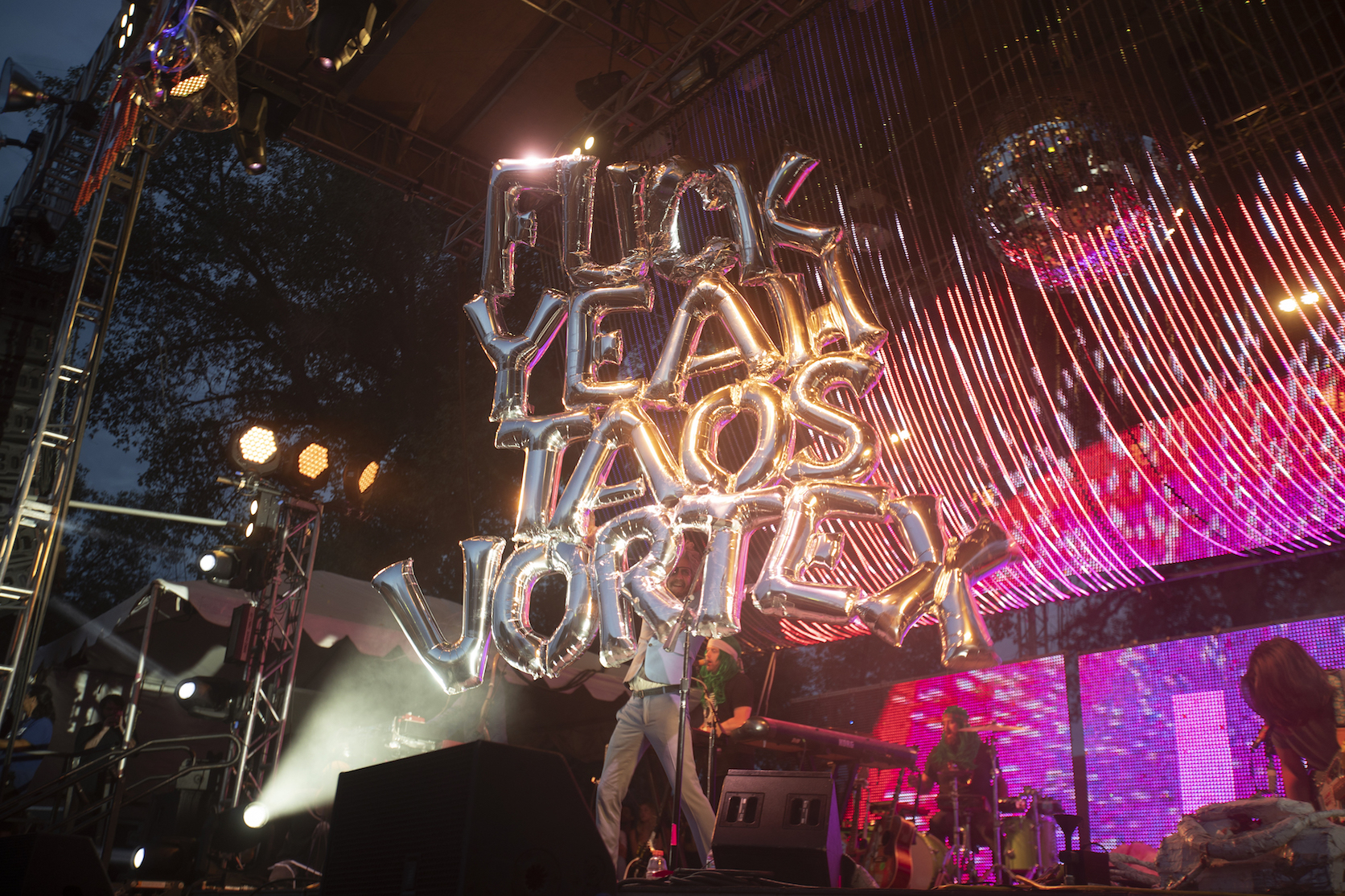 But the true cherry on the Vortex cake was the dance tent on Saturday, where DJs Öona Dahl and Matthew Dear gave the dance fanatics three hours to let loose. Öona Dahl came first, with a set unlike her normal sound consisting of deep bass and industrial effects. Matthew Dear maintains four aliases — different personas he employs depending on the ambiance he wants to employ — and for the Taos Vortex set he remained as Matthew Dear, the funky house DJ with a penchant for impressing both the techno-dance crowd and the mainstream one. He lived up to his reputation, and the unstoppable dancing within the tent kept it unusually warm in the high desert town.

Even though the event details weren’t all ironed out, the overall experience hinted at the possibility for Meow Wolf to throw one hell of a festival. They certainly delivered a stacked musical lineup — one that would sell out immediately if it took place in Colorado (hint, hint, Meow Wolf) — but if an artist collective is going to throw a festival, we want to see more art.

All photography courtesy of Meow Wolf