The element of surprise is often foundational to performance art. Street performances or flash mobs that start unexpectedly in a public setting are the best examples of this, though as those become more commonplace, other ways of surprising onlookers are explored. Black Cube — a local “nomadic” museum — thrives on the element of surprise. Since the exhibitions Black Cube curates are almost always site-specific, each one presents viewers and artists a chance to step beyond the normal bounds of experiencing art and into the realm of the unknown. The unknown, though it can be a scary place, is also a space for reinvention, creativity and ingenuity.

Black Cube has enjoyed a busy summer, including the third installment of the Drive-In series, a site-specific piece about border-relations in Texas and directing and organizing the Happy City transformation. But their newest endeavor has been an exchange program with the Centre for Contemporary Art FUTURA in Prague, where Denver artist Devon Dikeou is currently participating in a residency. But, Denver didn’t just give Dikeou to Prague, we are receiving a Czech artist in return — Jiří Kovanda, an internationally recognized performance artist.

Kovanda will come to Denver in September for his first American exhibition outside of New York City. The exhibition, titled All the Birds of North America is exceptional for more reasons than that, however. Even though the artist has some framework to plan his performance art, the major element of surprise for him and for viewers is that the actual location will only be revealed a day before the exhibition is to take place. All the Birds of North America will be open to the public Thursday, September 13 through October 6, with the reveal happening on Wednesday, September 5 through Black Cube’s Instagram.

As part of the exchange, Michal Novotný, curator and director at Centre for Contemporary Art FUTURA, chose the location in Denver. According to the press release, “by exposing the artist to an entirely different climate than his home city of Prague, Novotný is interested to see how Kovanda responds to the site and city in real time…without any foreknowledge or preparation.” 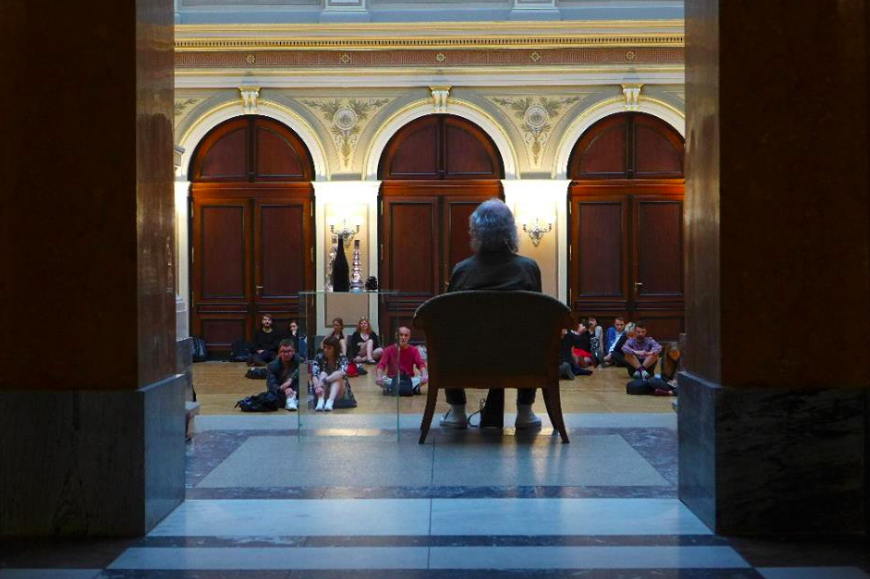 Jiří Kovanda during one of his performance pieces. Photo courtesy of Jiří Kovanda on Facebook

“This project will be openly fanciful and imaginary, more sentimental than realistic,” says Novotný. “With this site-specific project, we also tried to create the most picturesque American scene for Jiří to work with, something relatable to travel, freedom, and the open landscape — like those yellow turning leaves from the cover for All the Birds of North America atlas. Just as Jiří Kovanda did in his early performances, this exhibition relates to our inner freedom, the deep inner-self that cannot be controlled by anyone.”

Kovanda’s performance art has interested people in the Czech Republic and central-eastern Europe for decades. Though the artist often creates subtle performances that touch on the ephemeral parts of life — like Kissing Through Glass at the Tate in London in 2007 — he is also known for his politics and opinions. As a self-taught artist, Kovanda received criticism in his home country, where traditional methods of learning art were emphasized. After a period of time painting and making installations, Kovanda moved back to performative art, gaining respect the world over. His upcoming exhibition in Denver will be a rare treat.

The location of the exhibition was announced on September 5, 2018. According to the press release, “All the Birds of North America [will be] inside a 30-foot ‘Cruise America’ RV, which will be parked across the street from the Colorado State Capitol Building at 1422 Grant St. in a Time Park parking lot.”

*Editor’s note: When we originally published this article the end date was incorrect. It has been changed in the article to reflect that.