If you missed the flood lights illuminating 13 cars in RiNo this past Saturday night, you missed a one-night exhibition put on by Black Cube.  The show curated the event by using the artists’ cars as mini galleries. It’s being called Drive-In: Personal Space and the main idea behind this special nomadic exhibition was to “expand on how artists relate to cars as not only a form of transportation, but also as an extension of identity, economy and value,” explained the co-curators Ruth Anne Bruno and Cortney Lane Stell. What actually happened was an unexpectedly intimate understanding of the artists who were presenting their works in a way that felt borderline nosy at times.

All 13 artists presenting at this first exhibition are Denver-based artists and they included: Amber Cobb, Graham Eschen, Tobias Fike, Kate Gonda, Caleb Hahne, Lucas McMahon, Dmitri Obergfell, Zach Reini, Nick Silici, Gretchen Schaefer, Laura Shill, Kristen Hatgi Sink and Mario Zoots. The artworks ranged from sculptural additions to performance art to visual and auditory renderings. Some of the artists participated in their pieces — like Kate Gonda driving one visitor at a time in circles in a rented Car2Go — while other vehicles were left unmanned and open to step inside without explanation or direction. 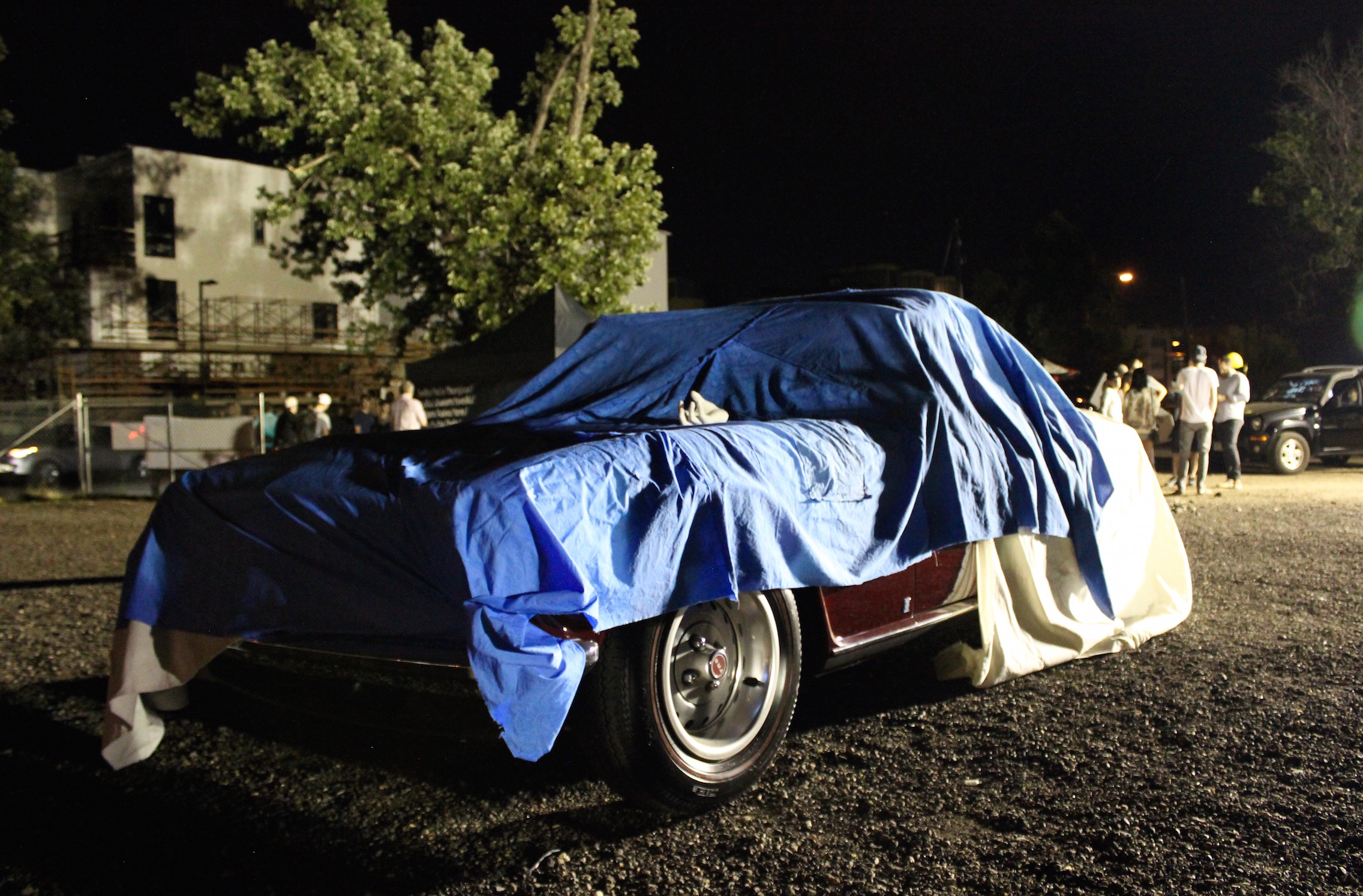 “The Chase” by Caleb Hahne

As the first in the series, Drive-In presented the artists with the challenge of transforming a piece of their life that is mainly used for utilitarian purposes —their own vehicles — into something that expresses a particular message. In working through that challenge, each artist came up with a completely unique interpretation and representation, resulting in a menagerie of oddly-adorned vehicles. Though the only central theme was that each artist used their own vehicle. Walking among the artworks gave the feeling of being at a county fair, where everything fits into the general experience even if the thematics aren’t quite right. 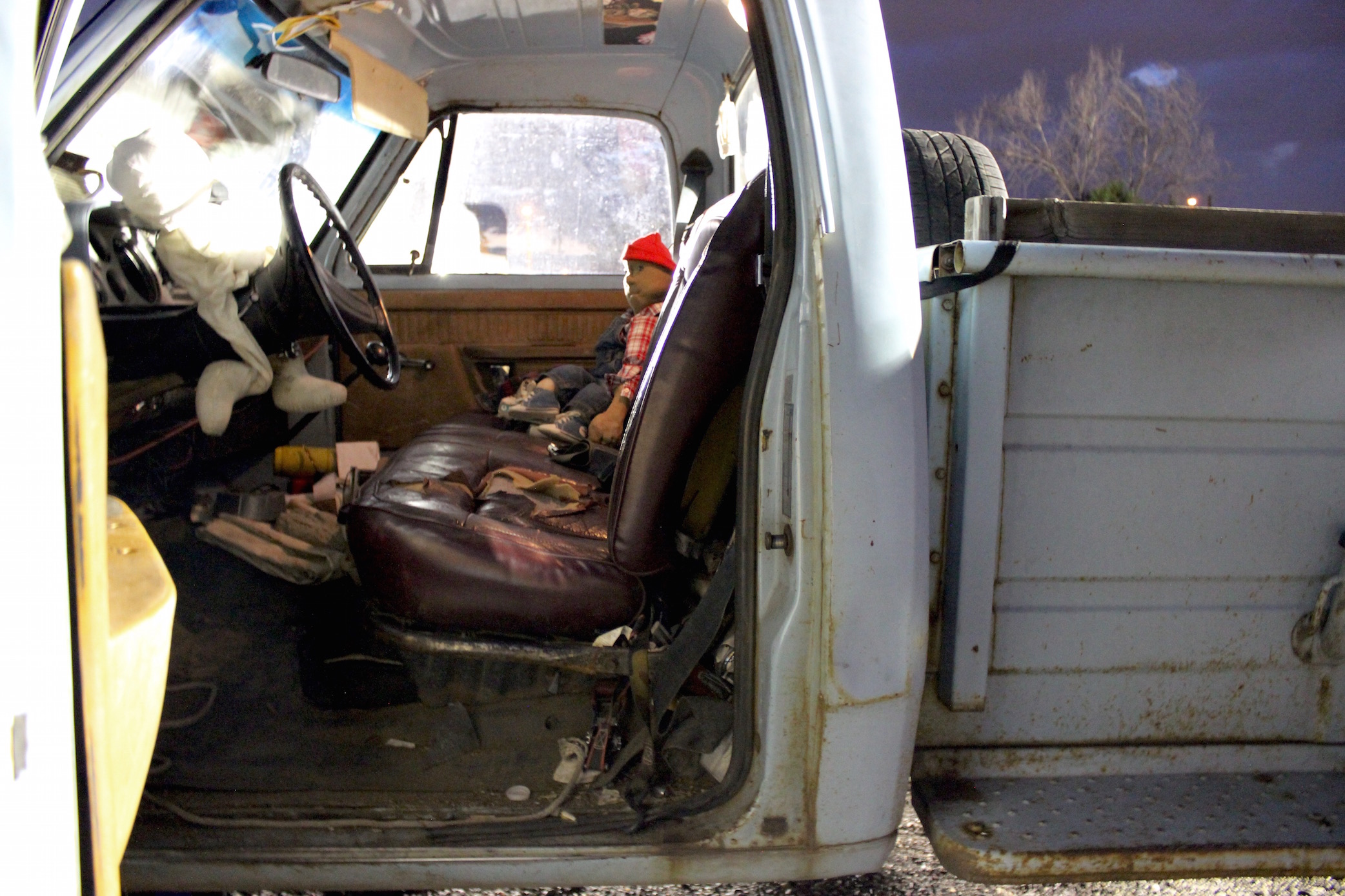 “Inside the Mind of a Truck” by Graham Eschen

With 13 artists, there was too much diversity to explain each piece in great detail. But some of the artworks were able to hold the attention of onlookers more than others. Those were Tobias Fike’s Jeep Liberty, Lucas McMahon’s Scion and Mario Zoot’s vintage BMW. Fike decided to take on the role of a used car salesman/carnival hawker by spinning a sign which pointed toward his car, reading “tonight only!” Inside his car — which any two onlookers could inhabit by sitting in the driver and passenger seats — audio played which read out statements about the car like “the sleep black body is perfect for a night out on the town.” His mixture of humor, satire and live-action role play made the experience of sitting in his driver’s seat less intense and more friendly, unlike a few other cars which invited viewers to step inside. 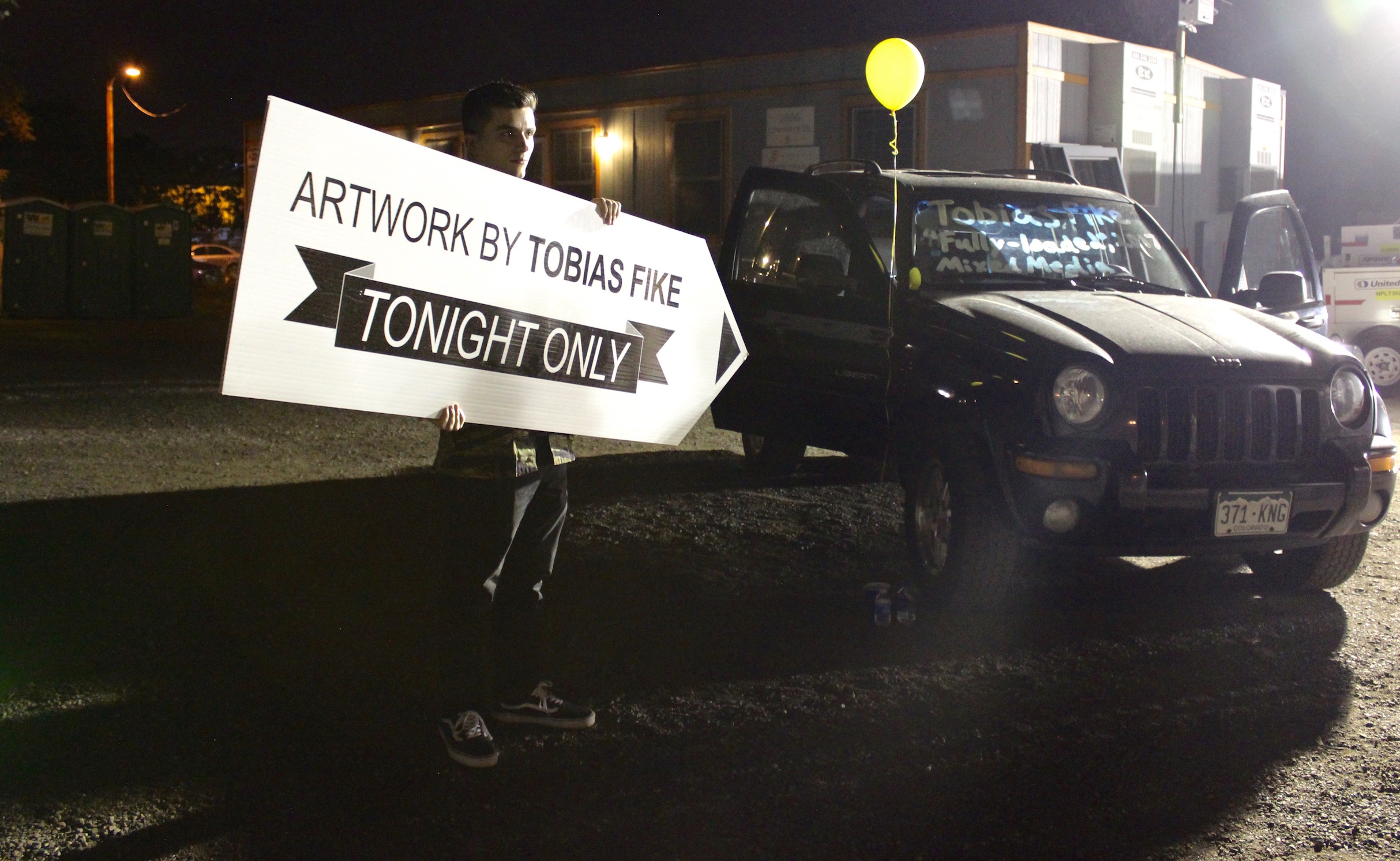 Lucas McMahon’s Ajar artwork addressed the negative side of car ownership, focusing on the aspect of self-destruction and suicide. With the simple design and supplies — a rag stuffed in the exhaust with an attached garden hose piped into the vehicle — the narration becomes increasingly hostile the more onlookers studied it. At first glance, this piece went unnoticed by many viewers, but after more inspection many seemed repulsed or upset, especially during the times when the artist was sitting inside his car. People were uncomfortable looking at the hose and the rag for too long, as if by looking, it made it more true or real. This kind of response from art is as important as a positive response, and can often bring attention to issues that would otherwise be cast aside. 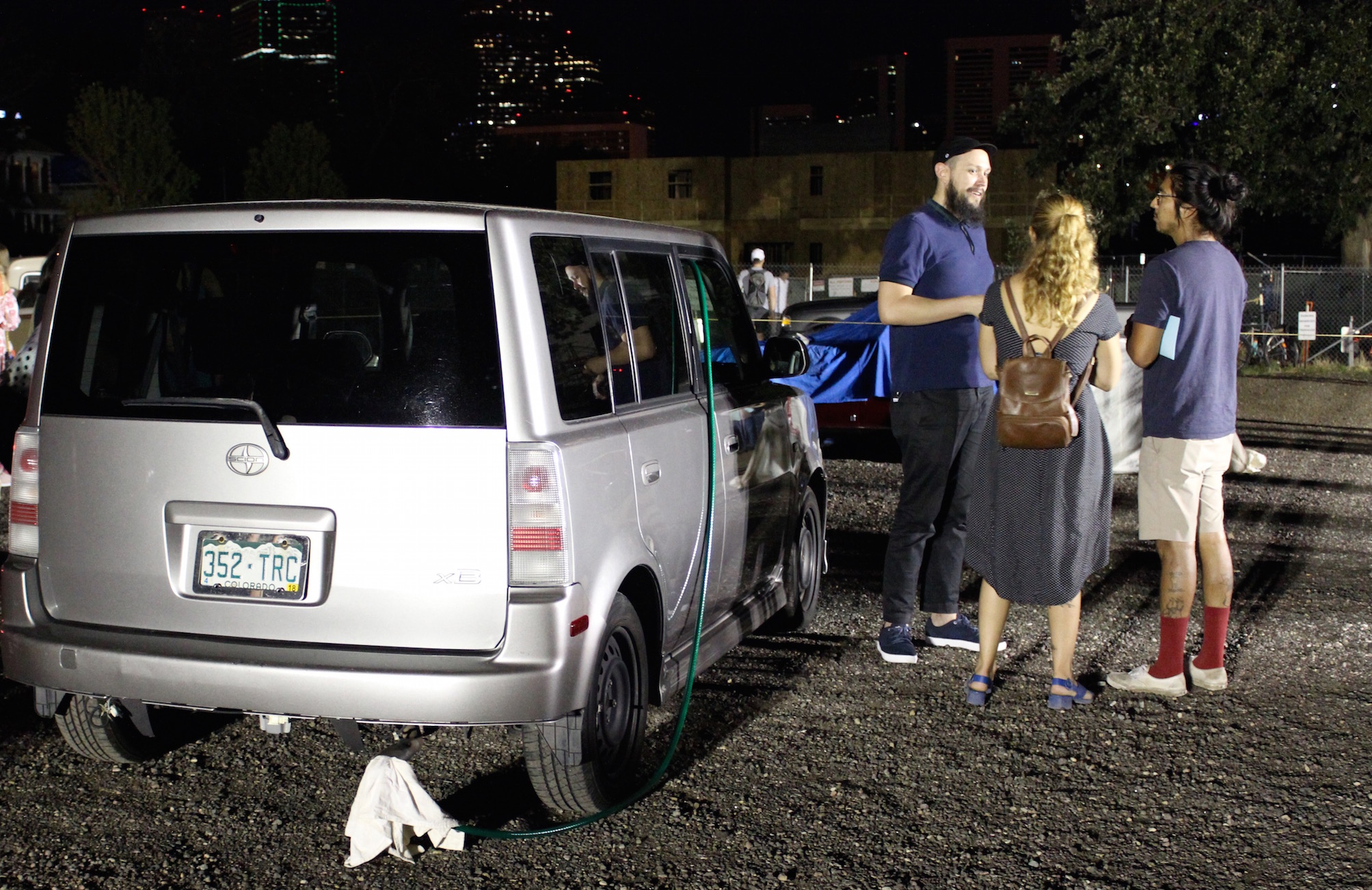 Mario Zoots’ The Karate Kid turned his vintage BMW into a performance piece, where he pretended to wax on and wax off, wearing a karate gi in the same style as the classic movie. A boombox played a playlist of songs from 1984 and inside the vehicle a collage was created in the same colors as the exterior of the vehicle. Zoots wanted to illustrate how “cars can readily be associated with cultural references and also become visual stand-ins for a particular moment.” After Zoots points that out, it’s fairly easy to think back to several cars that have been culturally iconic. 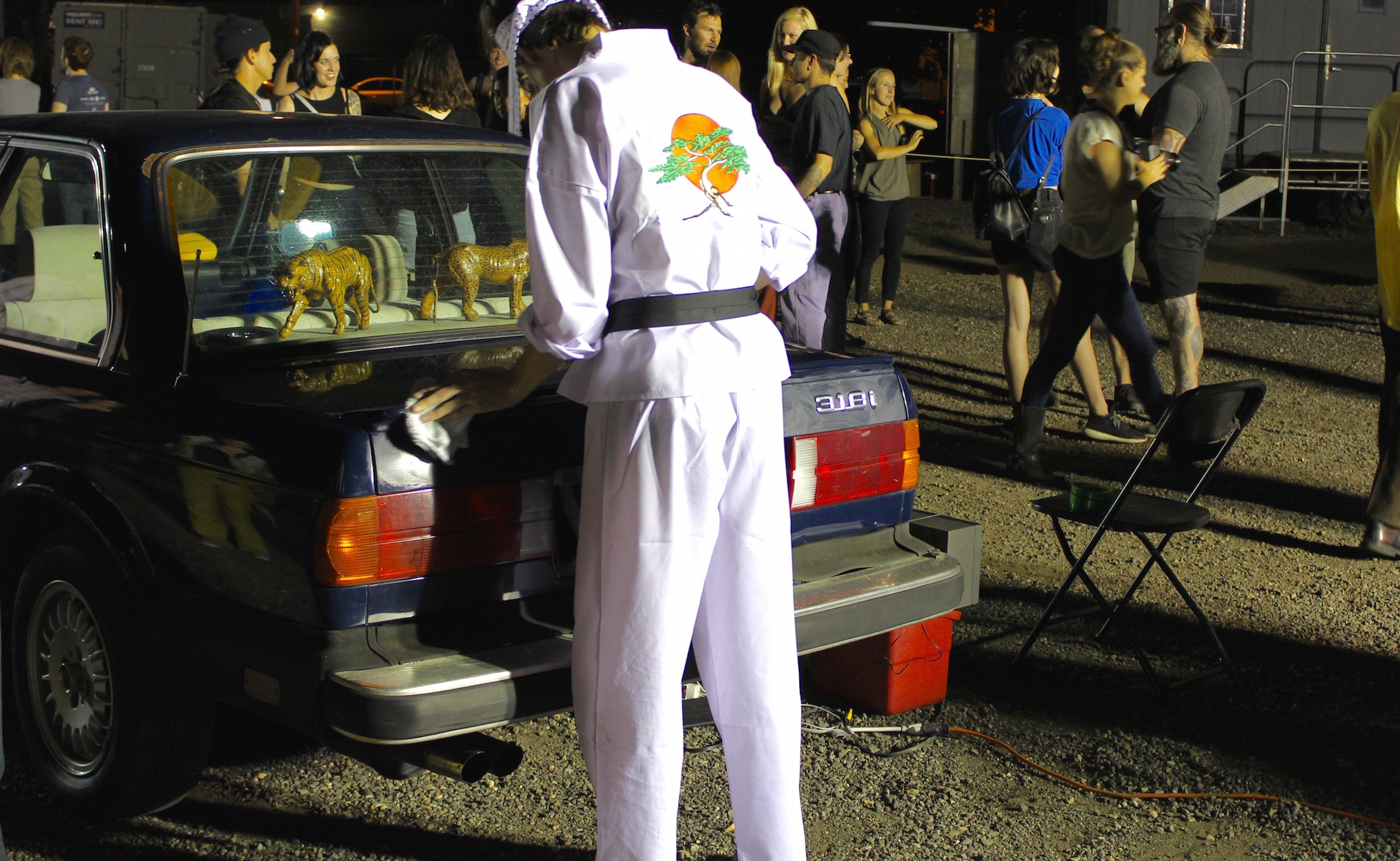 “The Karate Kid” by Mario Zoots

Black Cube prides itself on being a “nomadic contemporary art museum,” where each of their exhibitions are staged in different areas around the city in order to engage audiences on different levels than would be seen at a traditional gallery or museum. This creed seemed to serve them well this past Saturday with Drive-In, because the visitors certainly included people just walking by, unaware of the show prior to noticing the previously empty lot filled with flood lights and cars. This kind of staging — the pop-up trend — may just be the perfect way to connect new audiences with artists. Black Cube will organize two more events like this one, where more than 30 Denver artists will be encouraged to think beyond the typical boundaries of creating artwork for galleries and museums.

Though the organization and set-up of the exhibition was intriguing and interactive, the act of sitting inside another person’s vehicle as a visitor felt weird and oddly personal. This kind of discomfort might be a stepping-stone to a greater understanding of the art and the artist — but it also might be a step backward, to visitors being intimidated by artists that they don’t understand.

All photos by Cori Anderson