Dave Chappelle is Coming to Denver for Two Surprise Shows

Dave Chappelle is coming to Denver.

Tonight the world-renowned comic announced that he’ll be lighting up Summit Music Hall for two surprise appearances this Friday, March 16. The announcement was, in Chappelle fashion, unexpected and tickets are on sale now.

Chappelle is best known as a stand-up comedian, breaking boundaries and comfort zones with his provocative humor. He landed supporting roles in box office hits including The Nutty Professor, Con Air and You’ve Got Mail, to name a few. His first lead role in a full-length Hollywood film was in the 1998 classic Half Baked. In 2003, he became more widely known for his sketch comedy television series, “Chappelle’s Show” before going on to be named Comic Genius of America by Esquire in 2006 and number nine in Rolling Stone‘s Top 50 Stand-Up Comics of All Time in 2017. Chappelle was awarded an Emmy for his guest appearance on “Saturday Night Live,” a Grammy for his pair of Netflix specials The Age of Spin and Deep in the Heart of Texas. He’s also recently released two Netflix specials, Equanimity & The Bird Revelation, which is likely the reason for his surprise appearance. He’s come to Colorado several times, including stints at Red Rocks but now he’s back in The Mile High City. 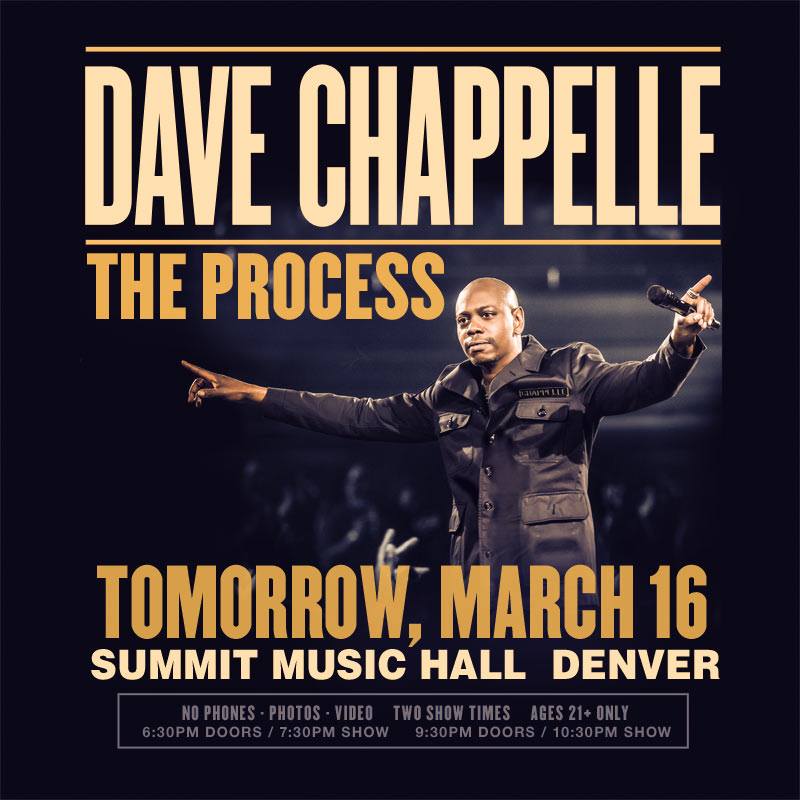