Whether your a.m. drink of choice is a caramel macchiato, sugar-free vanilla latte with two pumps or a simple espresso shot, we all have a love for the beard-bearing babes behind the beverages. Baristas are beloved, especially in a craft coffee capital like Denver. And for the second time, that love takes on a whole new meaning with the Hot Shot Baristas calendar.

Meet the guys who are taking “caution, hot,” to another level. These local lads agreed to break out their birthday suits for a good cause, and with the help of one lady, put together a calendar that has us all feeling a little steamy.

Two girls, a love for coffee, humanity and naked men lead to the birth of Hot Shots. One year ago, food writer Chelsea Keeney and her sister and local photographer Julia Morgan joined forces to promote the Denver and international coffee industries. By utilizing the appeal of scantily dressed men making hot drinks, Keeney was able to cultivate attention for a cause.

“I was at my friend’s house and she had a calendar of nice Jewish boys, and I was like… this is hilarious, we should do the same thing with baristas,” laughed Keeney. “And I knew a bunch of guys who would be into this, who didn’t take themselves to seriously and would be willing to strip for a cause.”

Last year, all of the profit from the calendar sales went to IWCA (International Women’s Coffee Alliance,) an organization dedicated to promoting equality by supporting women in coffee worldwide. And this year is no different. All proceeds from the 2018 calendar sales will go to the Hingakawa Women’s Co-Op as they build a women’s center in the coffee producing town of Rushashi, Rwanda. The center will provide a place for the women in that area to create, learn and teach.

“Ninety percent of coffee is produced by women, but only something like 10 percent of the profit goes back to them,” Keeney explained. “We wanted to be apart of creating further equality in the coffee industry.”

Aside from the charity aspect, Keeney said that she wanted to create the calendar to counter the pretention that tends to be associated with craft coffee.

“People think that baristas are pretentious, but they’re super down to earth usually,” said Keeney. “Sure, they’re passionate about their craft, but at the end of the day, these guys are just goofy dudes, making coffee.” 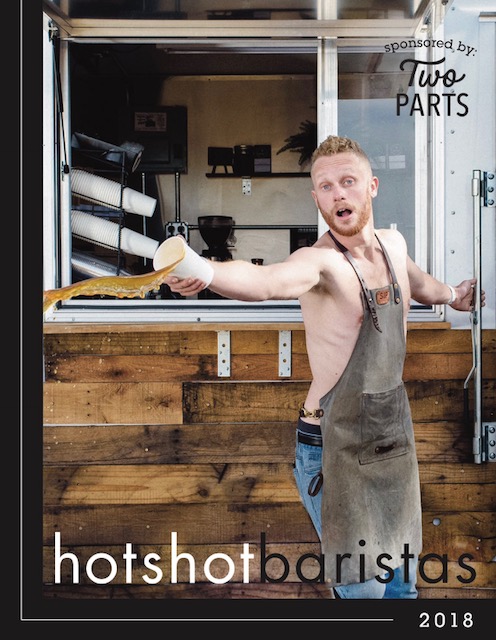 Just like 2017’s edition, the calendar dawns 12 months of shirtless baristas doing everything from updating the menu in nothing but boxers, to pouring coffee over six-pack abs and posing in an apron while dollar bills fly from below.

“That was actually his wife throwing dollar bills on him from the floor,” laughed Keeney when describing Mr. June (Joe’s) photo shoot.

Each page has a bio that Keeney scripted herself featuring fun facts about the pictured stud. Mr. February (Monty) from Novo, for example, has “an otter as a spirit animal,” and enjoys “hiking on hot summer days.”

Following the hype of her first edition, Keeney received a flood of potentials all clamoring to participate in this year’s calendar. She even started a hashtag, #HotShotEnvy and corresponding Instagram to help in determining who would make the cut, after much deliberation, the finalists were chosen:

All of the shops represented are local because as Keeney pointed out, supporting Colorado coffee is a passion of hers. And she plans to increase that support in Hot Shot’s coming years.

“I want some of the proceeds to go back to the baristas next year, maybe to even sponsor a trip to the coffee source,” said Keeney. “They work so hard to build our community, so giving back to them through Hot Shot is definitely on my mind.”

In addition to giving back to local baristas, Keeney has her sights on taking the publication national by connecting with coffee shops in Portland and Seattle.

All of the locations represented are local, so you can pick up your Hot Shot copy in any of the shops listed above, or buy one online, here.