Review – Denver Came Out in Numbers for Tennis and Brent Cowles

Paired with Colorado up-and-comer Brent Cowles, Denver music lovers came out in numbers this past Saturday night for husband and wife duo Tennis. The Ogden Theatre gradually filled throughout the night for the local showcase, with a packed crowd lining the tiers well before Cowles opened the show. This wasn’t the first time Tennis played the Ogden, but it was one of their largest headlining shows ever, and right here in their hometown of Denver.

Cowles kicked things off at 9 p.m. on the dot storming the stage with his Foxhole Family Band as well as Anna Morsett of local act The Still Tide (Cowles’ drummer Joe Richmond also plays with The Still Tide). Cowles rocked his glasses off by the end of the first song, concluding with Morsett smiling and cracking a joke to Cowles as he picked them up. The stage charisma between Cowles and Morsett was unmatchable. Delicately combining their harmonies and swagger alike, the two played off of one another’s movements and sounds. The collaboration was nothing new but it is one we hope to see continue. 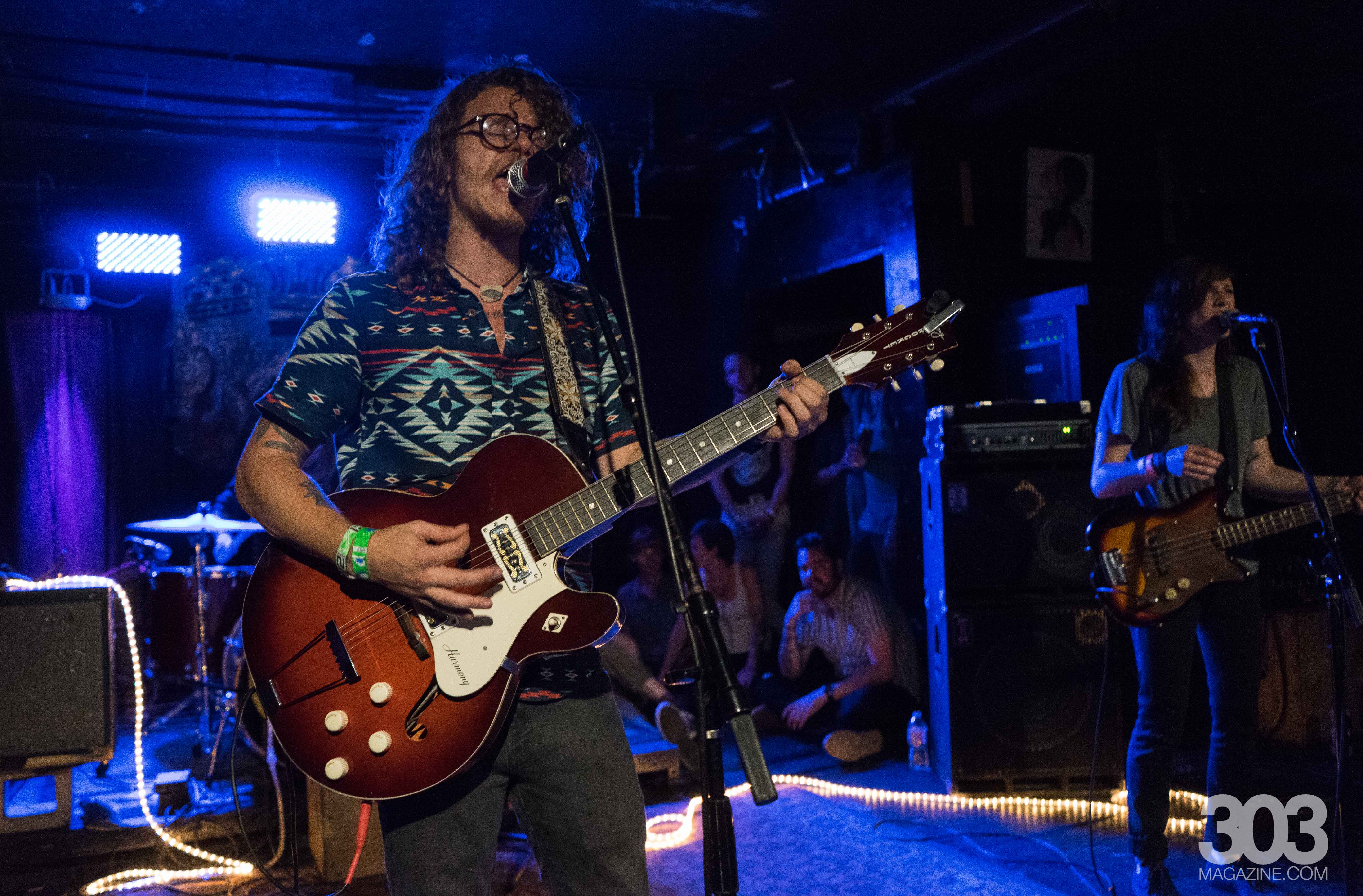 It didn’t take long for Cowles to bust out his fancy footwork and quirkily exaggerated expressions. One of the things we love about Cowles is his dancing, and he always encourages everyone to use their dancing shoes, too. Even without the encouragement, movement comes easy at a Brent Cowles set — his genre-blend of soul, country, southern rock and modern rock will have you shimmying and tapping your toes with every strum of his guitar or whip of his hair.

“Denver, it feels good to play a show at home.” – Brent Cowles

Throughout the performance, Cowles transitioned his vocals through evolving falsettos and deep, rumbling groans all while spotlighting his ability to harmonize with his band and Morsett’s backup vocals. He performed “Keep Movin’” from his unreleased record due out this spring along with fan favorites “Cold Times” and “9th & Lafayette.” After the set, Cowles, some of the Foxhole Family Band and Morsett stopped by the merch booth to talk with fans.

Tennis came next, approaching the stage in the most perfected revival of ‘70s fashion. Singer and keyboardist Alaina Moore wore brown corduroy bell bottoms and a silk green button up, with her recognizable permed locks. Guitarist and keyboardist Patrick Riley sported a silver sequin polo, highwater jeans and white high-tops paired with a blonde bowl cut. If a band is going to go with a theme or style they need to at least do it right, and Tennis — they do it right. And it may not even be a theme or style, it may just be their preferred fashion. But on stage, it’s fucking fantastic.

The duo, complemented by their full band, started out with a bang. First came “No Exit” then “My Emotions Are Blinding,” propelling the audience into a whirlwind of energy and excitement. Shortly into the performance, Moore took a moment to make an announcement:

She also announced that the first show she ever saw at The Ogden was Good Charlotte, which was met with some chuckles from the crowd. A few songs into the set, Riley tore off his jacket revealing his silver sequin polo underneath. He made moves, stepping away from his guitar and up to the keyboard so that Moore could take center stage. She strutted some minimal dance moves, swaying and playing with the mic cord. “I discovered I can’t even walk and sing without getting breathless so that’s the absolute most dancing I can do,” she said. “Not proud of it but it’s me, you guys.” 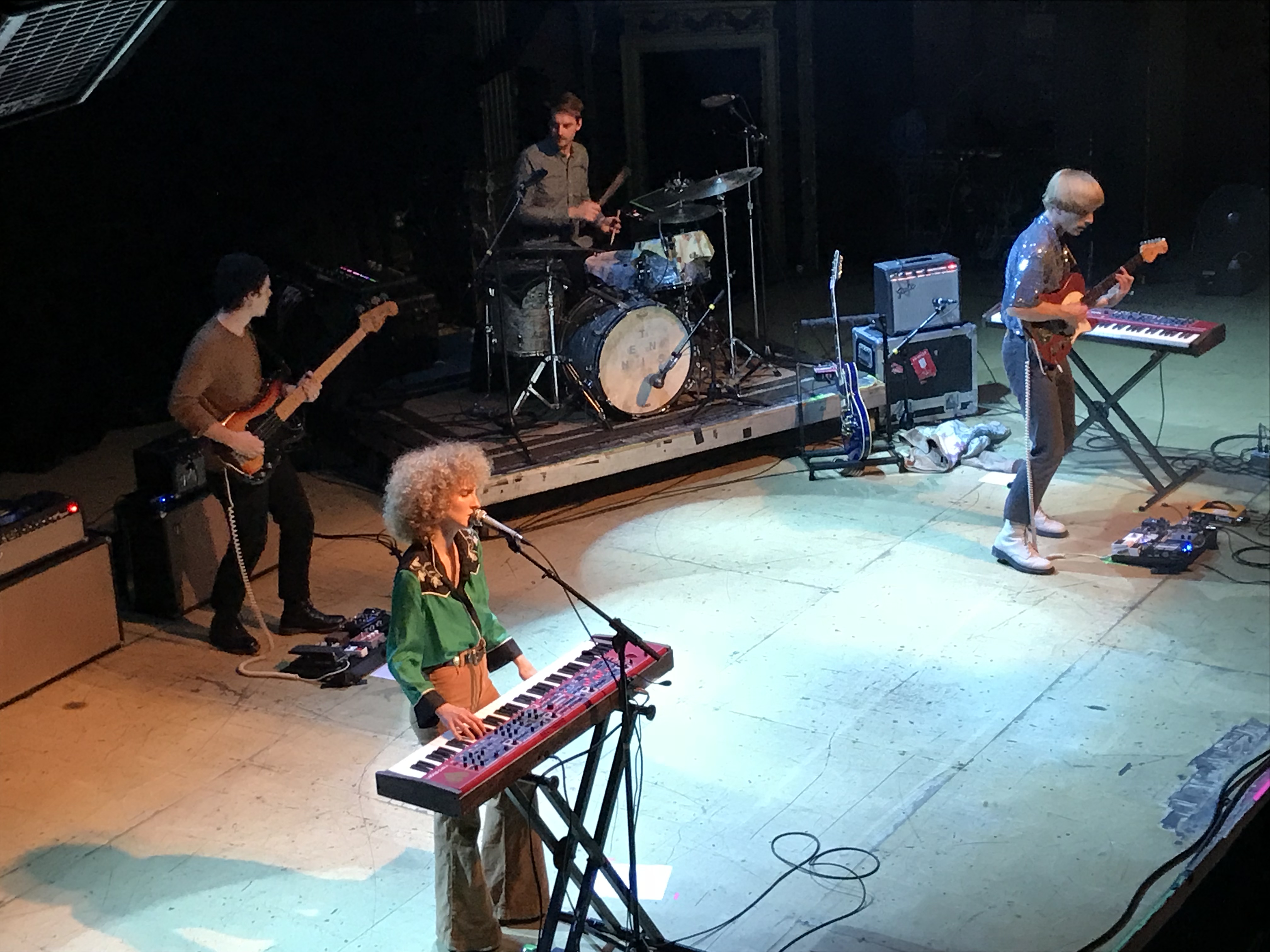 Riley coexisted with the music, not only playing it but letting it play him by means of his footsteps and balance. He swayed from side to side, stood on his toes and spent a large portion of the show facing his bandmates. You can tell playing music is something Riley weaves into his movements, fashion and emotions alike. On his right, Moore’s range was accentuated with falsettos and quick, flawless movements from note to note. Though Riley never talked about being emotionally and physically tied to his music — or talked at all — Moore did. “For those of you that don’t know, I have this crazy family trait of panic attacks. I’ve decided my way of dealing with it is to write it in a song and accept it.” She continued, “Anxiety — you have to live with me so we might as well get along.” They then moved into a new song they’ve never played in Denver before.

Tennis seems to embody the saying “dance like no one is watching.” Not because they dance like no one’s watching, but because they tempt you to. The duo has the ability to mold together modern and classic genuinely while also making it something of their own. Their authenticity for vintage vibes left the audience wanting to hand jive and bust out movements from their favorite disco films. Some of the crowd even found a way to mosh to the group’s sounds. As the crowd screamed for an encore it was obvious that Tennis had left everyone not just satisfied, but also wanting more. From a perfected persona to a unique, well-executed sound, we wouldn’t be surprised if we saw Tennis playing much larger shows in the future.