Review – Denver Danced Into the Future at Decadence 2017

As if Denver wasn’t lucky enough to be saturated in electronic music, we’re also the host of the nation’s largest New Year’s Eve dance celebration. For two nights, the Colorado Convention Center transformed into a futuristic utopia of music, enchanting the souls of all who entered. With performances from some of the largest EDM artists around, Denver was beyond pleased to welcome heavy-hitter Bassnectar, legendary electronic duo Justice, Porter Robinson and more. Presented by Global Dance, AEG Presents and Live Nation, the massive City Beyond Tomorrow featured an impressive scale of production, illuminated decor and whimsical performers who strutted around the arena for everyone to enjoy. After bracing the freezing temperatures and long lines, electronic music lovers joined together to ring in the new year as citizens of the city of Decadence. 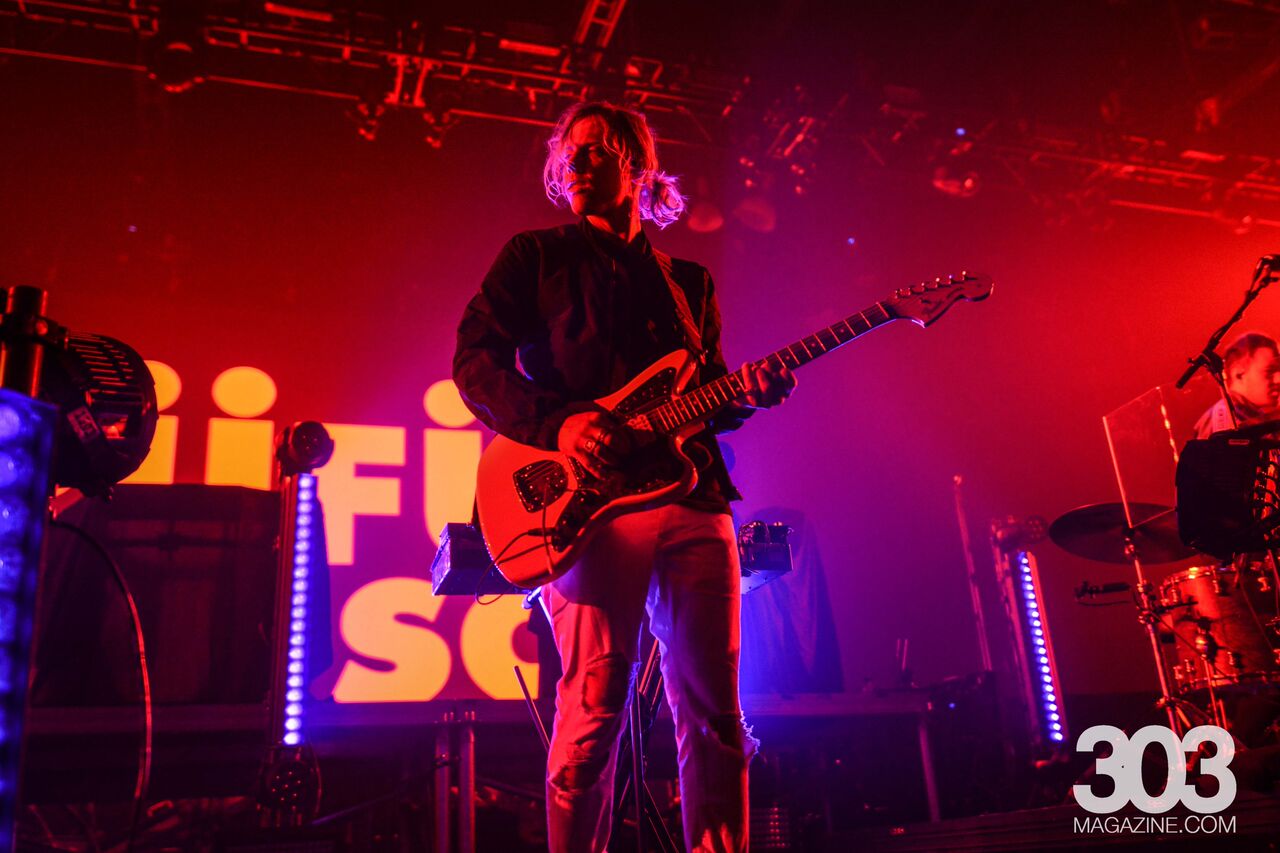 In anticipation for good music and good vibes, the Decadence doors were flooded with attendees promptly at 6:30 p.m. With 584,000 feet of event space and thousands of guests, the Colorado Convention Center was transformed into a dark grotto of EDM-only territory. Upon entering, many party goers stopped by the 303 Magazine photo booth to snap a free shot in remembrance of the night, which can be found here and here. Continuing ahead lay the Cyber District Silent Disco, a fourth-year rendition that has returned by popular demand. Now if you’ve never been to Decadence’s silent disco, it’s something to try. From 7 p.m. to 3 a.m. this area had people grooving to the sounds of 20+ Colorado artists. After grabbing a pair of headphones and switching from blue, green and red channels, Decadence attendees could listen to sets from up to three different artists at any given time. In addition to the silent disco, this year Decadence featured a platform for guests to play virtual reality games. With a generally short waiting time, patrons could strap on the gear and enter an alternate world of virtual reality. 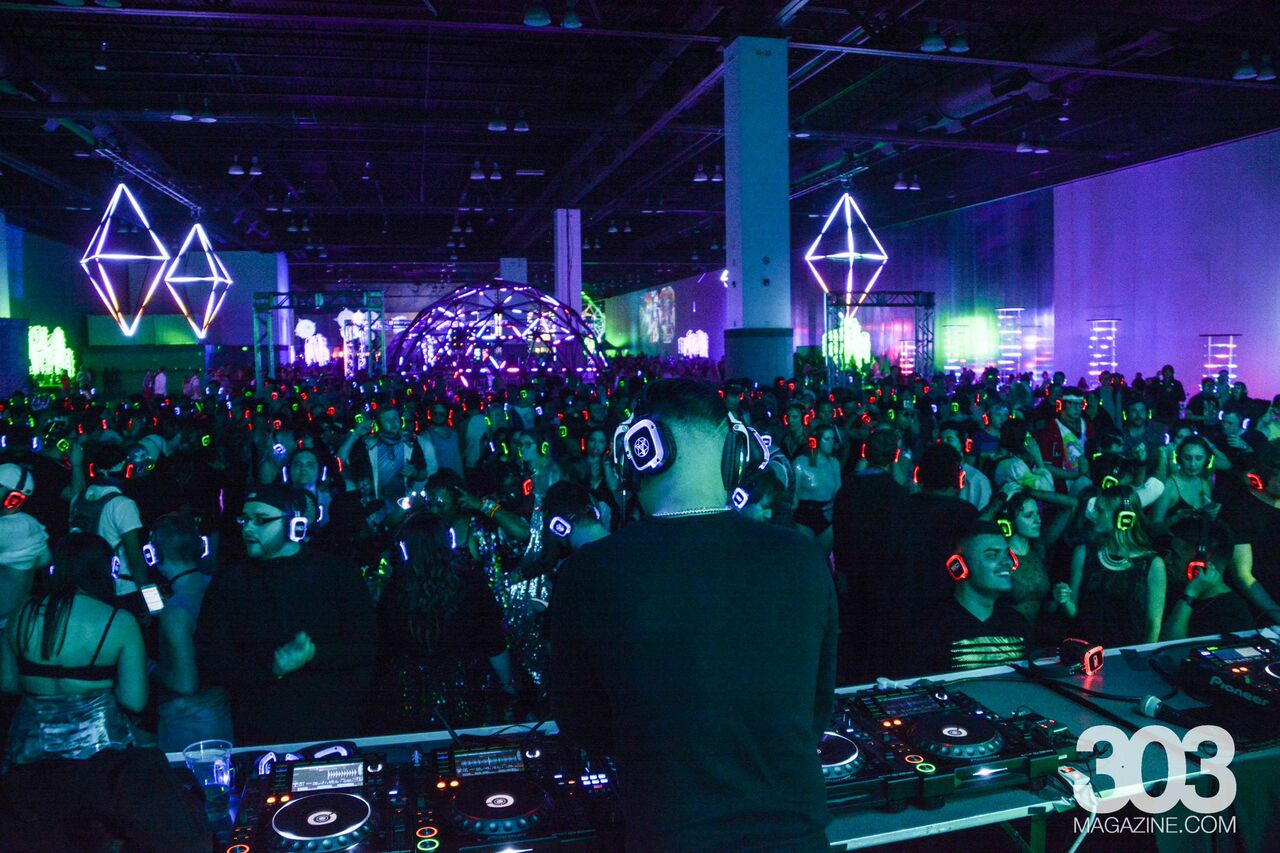 Silent Disco. Photo by Will Sheehan.

With two massive stages, EDM fans were able to get a taste of anything their music pallet craved. The western-most stage – the “Time Vault” stage — featured artists such as Space Jesus, Odesza, Bassnectar and Big Gigantic, while the easternmost stage — the “Grid Stage” — showcased artists such as Armin Van Buuren, Justice, Galantis and Slander. Although not a difficult task, the walk between the stages did take a chunk of time. With a small door between walls and a large opening of walk space in the far back, guests could disperse to and from stages, lounge areas, vendor booths and more at their discretion.

Grabbing a drink, on the other hand, was quite the adventure. Implemented just last year, Decadence now makes attendees wait in two different lines — a drink ticket line and a bar line — in order to purchase beverages. It made things more complicated that the drink ticket stand was located at the back side of the stages while the actual bars were adjacent to the stages. Making your way through crowds for $10 drinks wasn’t ideal on New Year’s Eve, but everyone made due and looked like they were having a jolly good time while doing it. 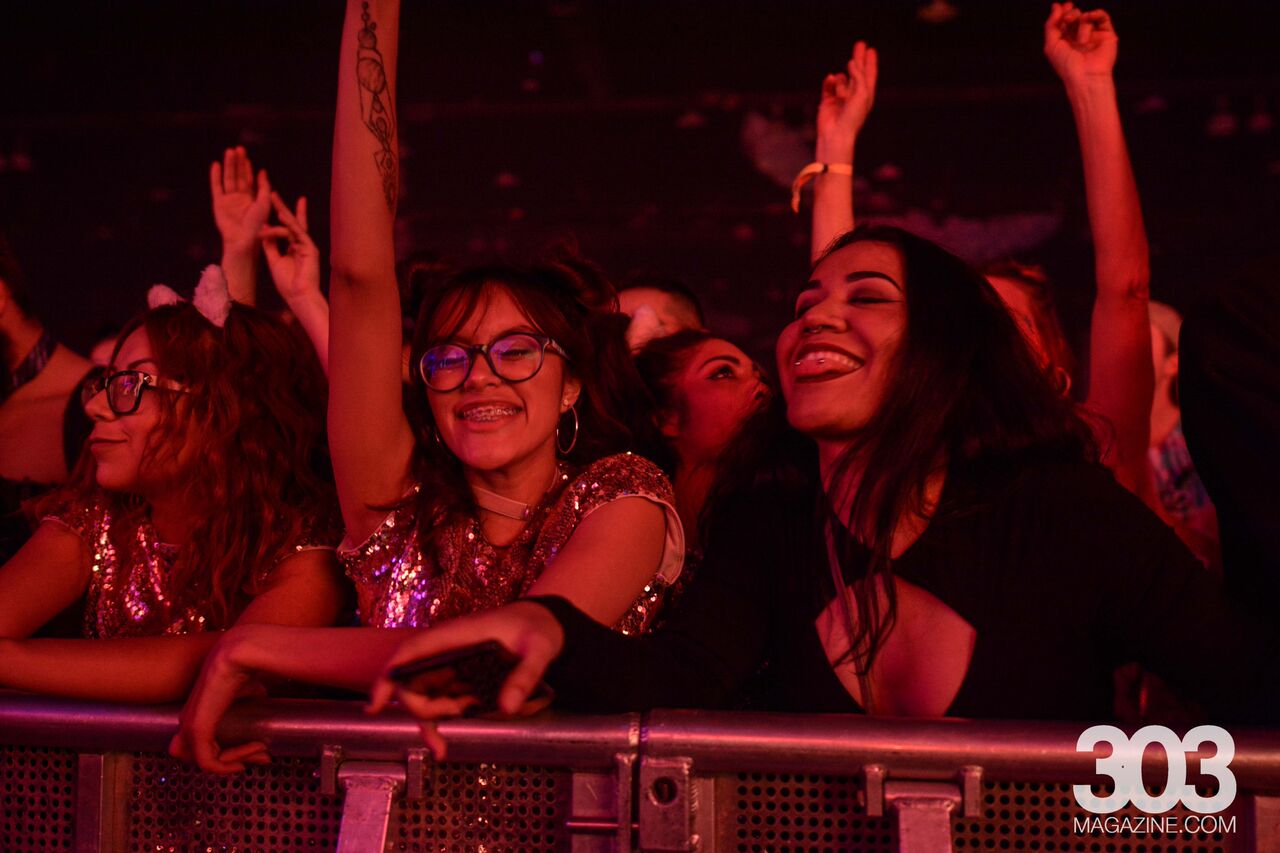 Although I was only able to attend Decadence the night of the 30th, Bassnectar was, without question, who the majority of night one attendees were there to see. If there wasn’t a bass-drop on a shirt hat, scarf or pendant, it was tattooed on an arm or leg. Bassnectar easily brought in the biggest crowd of the night as bass-heads united to witness Lorin himself serve a hefty dose of mind-altering bass-heavy music. Dropping four of six songs on his latest EP, Bassnectar, AKA the bass god, created a sea of headbangers for as far as the eye could see. Dropping Colorado-local Jantsen’s latest track “Kaiju’s Theme,” Bassnectar left his fans far from disappointed. 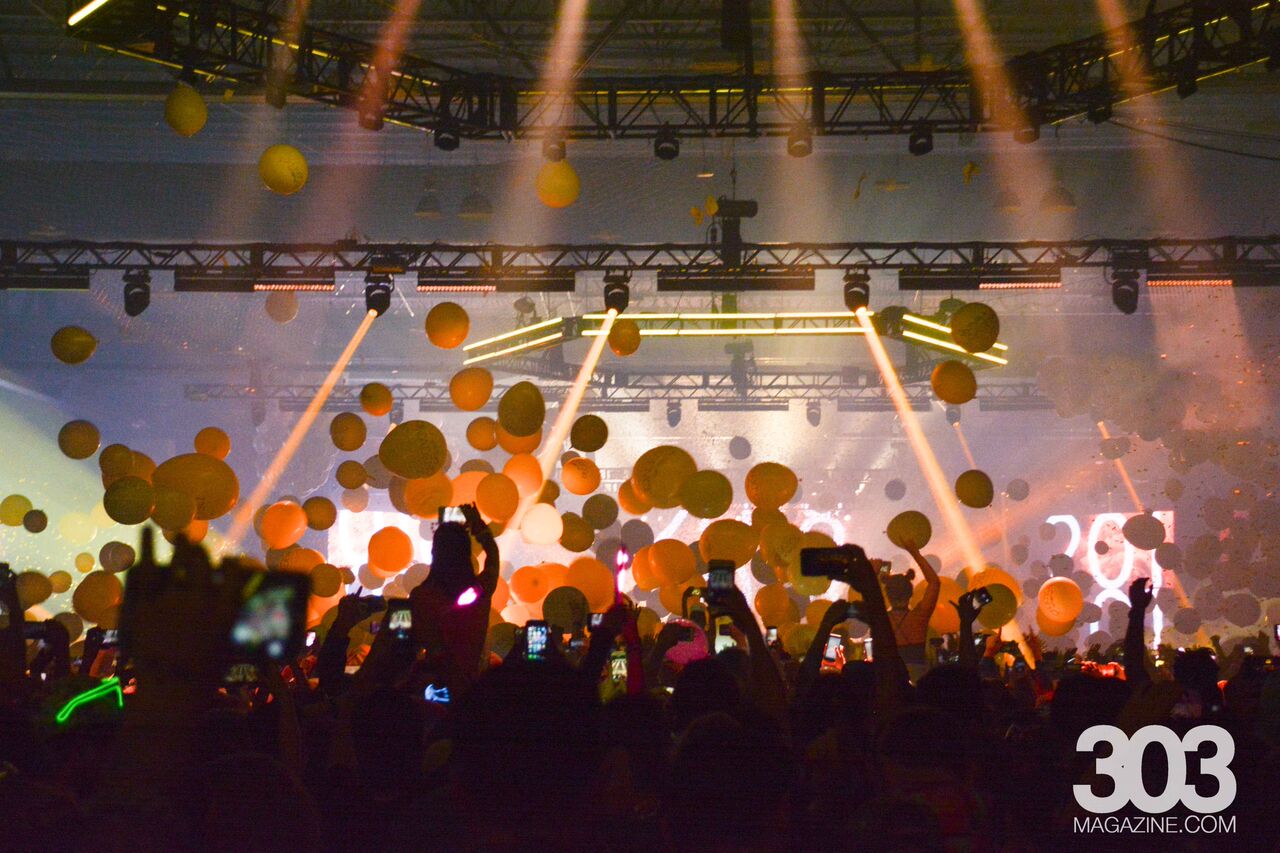 With two nights full of music from over 70 artists, the citizens of Decadence were not left disappointed. The variety of music — techno, dubstep, house, trap and every sub-genre in between — fulfilled every ravers’ musical needs as we, together, danced into the future. Just as the Decadence webpage shares, “Ripping basslines, emotional ballads and upbeat anthems left us crying, dancing and head-banging all weekend long. Showcasing our passion and love as one collective community, we roared into 2018 in a spectacle of light and sound.” Until next year, Decadence.

All photography by Will Sheehan. Go here to see more photos. 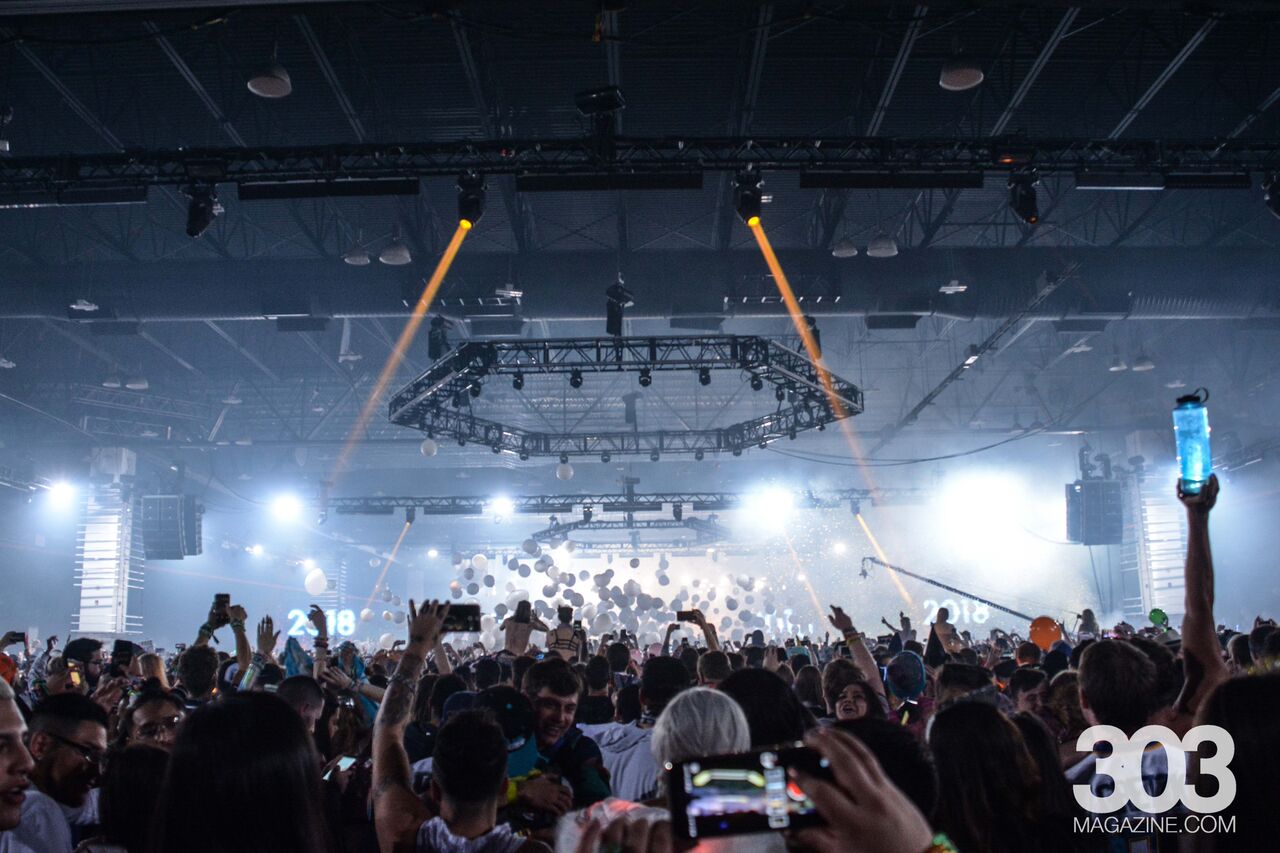