It’s been a little over two years since Rebecca Hart, Curator of Modern and Contemporary Art at the Denver Art Museum has been in the Mile-High City, overseeing its body of 12,500+ works of art. Hart previously served as the Curator of Contemporary Art at the Detroit Institute of Arts (DIA) for 10 years before making the move in August of 2015. It was the diversity within the art community and the captivating possibilities of Denver’s emerging art world—“opportunities to organize exhibitions, [the] interesting collectors in Colorado, a number of things,” and strong [political] voices in the community— that coerced her move. Throughout the years and in her time at the museum thus far, weaving the cultural connection between the local community and the art world has been something that both Hart and the DAM have consciously and consistently made an effort to do. 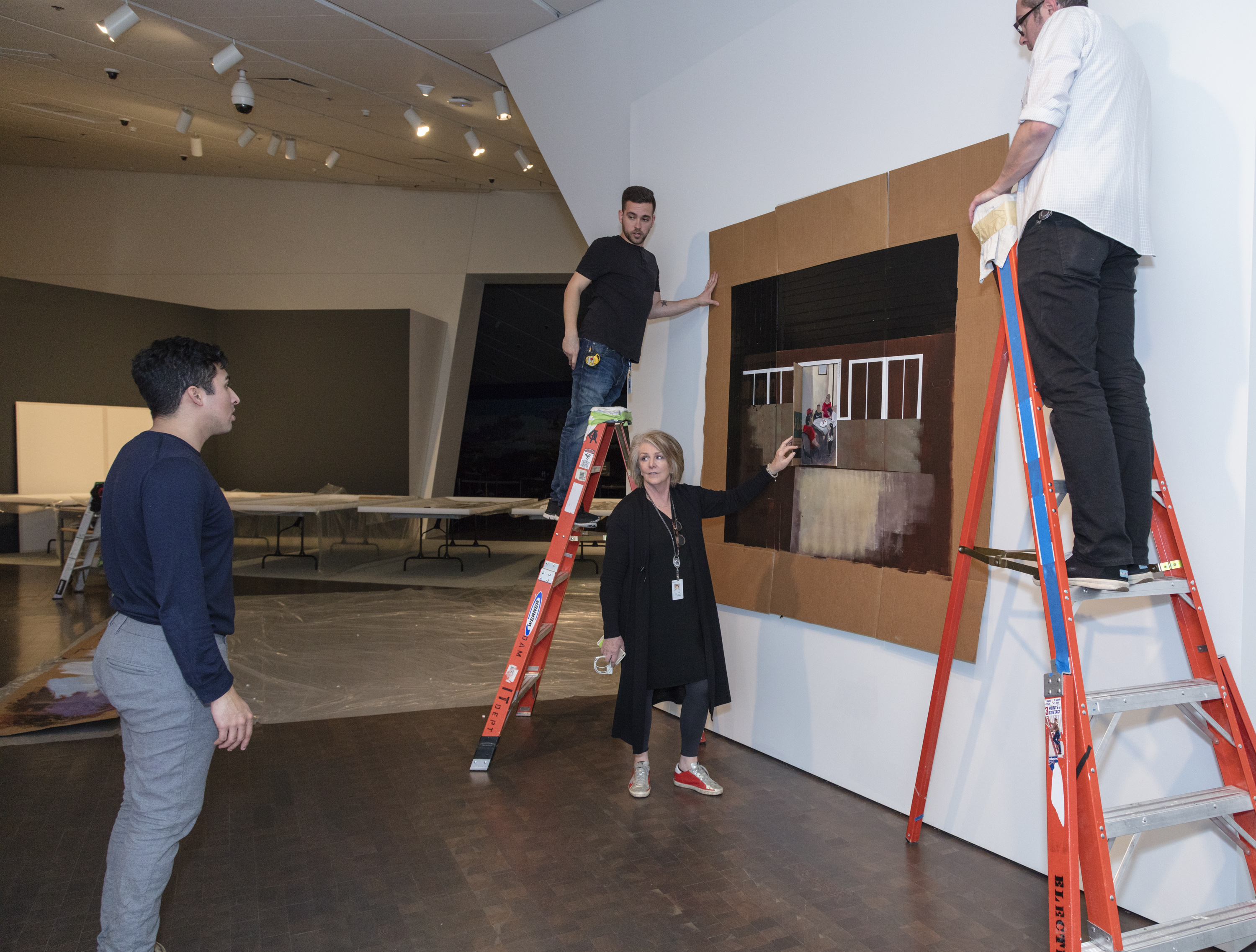 The Importance of the Biennial

In September of this year, Denver and the art community had the chance to dive deeper into this sector of its heritage at the Biennial of the Americas—a week-long festival that occurs every two years and exhibits the works and ideas of artists, musicians, leaders, speakers and experts in the arts and culture sectors. The Biennial connects visionaries from North, South and Central America, as well as the Caribbean, to address the most prevalent matters of our current time.

READ: The Pros and Cons of Biennial of the Americas 2017

The festival was not only an important glimpse into the perspectives of members of these communities — their identities, cultures and heritages in the art world — but also opened up and redirected those very questions back onto the city of Denver itself. Hart noted how important events like the Biennial are for the city of Denver, elucidating on their significance to enable an enriching discovery of self for the city. 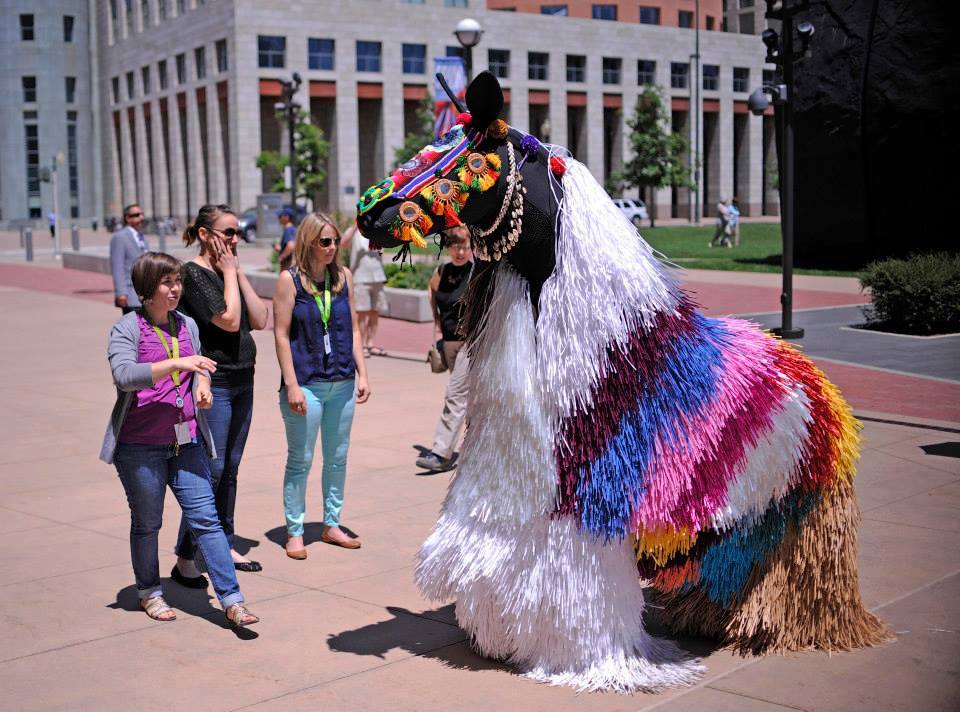 While the exploration of the derivatives of Denver’s art world identity and heritage are perceptibly toured through eyes of local artists, the museum takes the opportunity to cast the lens back on Denver through the questions and voices of its visiting international artists as well. One event that offers and probes this observation of current events and politics in art is the museum’s annual Logan Lectures.

The DAM recently held its 10th Logan Lecture series this fall, showcasing over 100 international contemporary artists. The lectures started as a “call […] to elevate the profile of contemporary art in Colorado,” according to Hart, and have continued to contribute to the growingly rich art community of Denver by bringing in artists annually to share their work, practices and worldwide perspective on current topics.

This year, the series hosted Cuban-American artist and documentary filmmaker, Coco Fusco, who discussed how politics in Cuba have influenced her craft (which revolves around photography, videography and performance). Given the on and off tension between the US and Cuba over the last few years—particularly as of late with the heavy travel restrictions and implicated bans for American tourism in Cuba — Fusco’s lecture came at an interesting point of contention between the two countries. 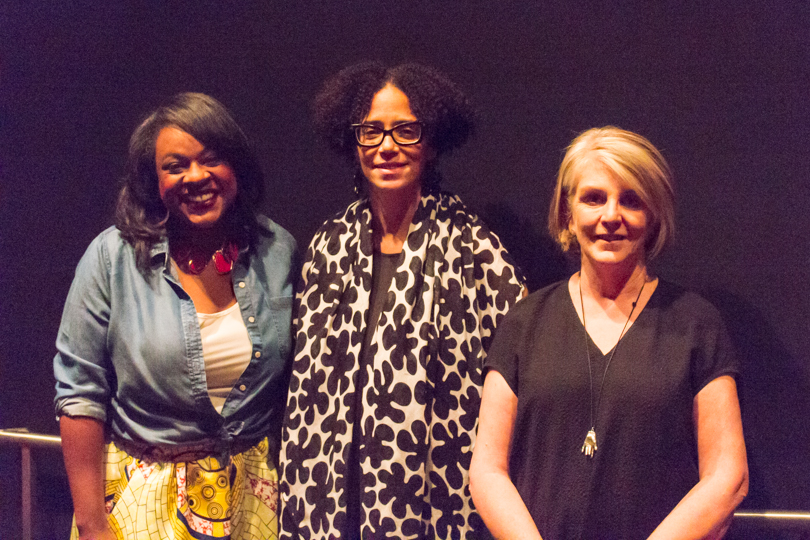 Photo of Rebecca Hart, Coco and State Representative Leslie Herod (who introduced Coco the evening of her Logan Lecture). Photo by Katherine Uhlir.

“This is a woman who is just fearless when it comes to confronting the Castro regime in Cuba,” Hart commented of Fusco, whom she had wanted to interact with for over 10 years. “By luck or instinct, who knows, Coco has a nose for these stories that are not readily available.” Hart recounts the work that was discussed during Fusco’s lecture, a documentary that synonymously weaved together the two separate recounts and interviews of a poet that was jailed during the regime and the very woman that accused the poet of being seditious. “In a country where there is extreme censorship, Coco created a documentary based on information that isn’t readily available.” Fusco completed filming in Cuba just hours before her departure from the country, heading straight to the airport directly from the last interview with the informant. “What was so uncanny is that they understood how dangerous this was,” Hart noted of the project.

“This is when art and installation can really influence politics,” Hart explained, elaborating that it was important to bring an artist like Fusco to Denver and the Logan Lectures, to include someone who expanded the political dialogue and whose work was highly relevant to our current times. “The Logan Collection is largely made by artists who are politically and socially engaged,” Hart explained, “We try to bring artists who will annotate the collection.”

The subject of politics in art is no stranger to Hart, who set the tone with her first exhibition at the DAM, Audacious. The exhibit featured the work of contemporary artists who had the intent to make some form of a political statement on current events. According to Hart, these artists were “very politically engaged” and willing to address issues of global conflict.

“Because of the curators who have been influential in forming the collection, and the collectors in Colorado, we have a density of work by artists who comment on the world that we live in. It just made sense to emphasize their practice, their commentaries, and where the ‘juice’ [was] in their practice. The themes were very traditional art historical categories that were re-thought— [portraiture, history, landscape]—the great genres of our history but presented in a modern way.”

Hart strived to find a point of balanced contention with works that both spoke to and clashed with one another. This tension brings up the fascinating ability that both art and artists have to influence the viewer. It is a reminder on how we, as the viewer, are constantly reintroduced to the true power that this medium can hold—while also being moved to inquire how it can influence the world and day to day life.

Does art affect politics or do politics affect art? 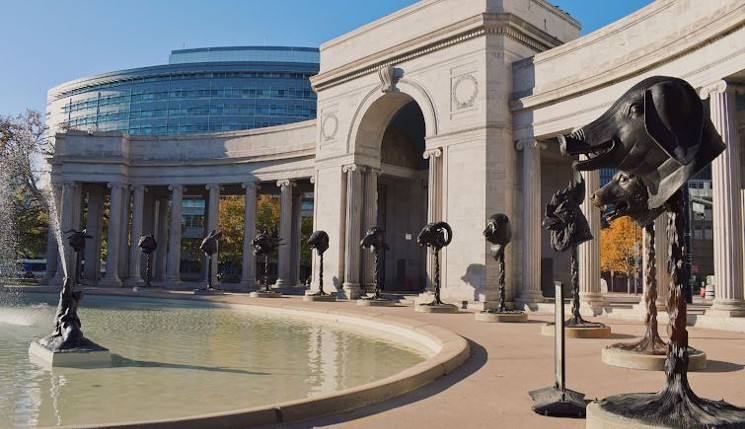 So that poses the question, does art affect politics or do politics affect art? According to Hart, “it actually happens both ways.” Looking back into history, we can see the trajectory of this happening in both instances, especially just a few decades back. Art has always seemed political, according to Hart, who has found that some artists speak louder than others in regards to politics in their work.

“[There] was a time of conservative politics [during the Bush era] where funding to the arts was cut in the United States because [the] artwork was considered radical. Then, there are instances where artists like Pussy Riot [in Russia] […] were protesting for freedom within the Putin regime and two members were jailed, and as jailed artists, they became much more powerful. This is also the case with Ai Weiwei, whose work is on exhibit in Civic Center Park now.” She also notes that while some may say they are removed from the political realm and don’t participate in that world, that in itself is also a political statement.

Hart recalls this case with some of the louder artistic voices from the ’60s and ’70s who also stated they did not affiliate with a movement or the political party, but whose words and messages still held tremendous weight with their viewers. “Fluxus artists said it wasn’t a movement, but it included Joseph Beuys, Claus Olderburg and Yoko Ono—artists who became very famous. So yes, it was an ‘attitude’ not a movement, yet it’s found a place in contemporary art history.”

If you’re not familiar, Fluxus artists were an international and interdisciplinary group of artists and writers that significantly shaped the art and political realms during the sixties and seventies. According to their manifesto, their goal was to promote a “revolutionary tide and flood in art […]; living art.” Along with these artists, some of the most famous, powerful and moving pieces of artwork of the last few decades have also been the most controversial.

“Artists are truth tellers,” Hart explained, “and sometimes they’re the loudest and most powerful truth tellers [around].” It is a pattern that has been seen through centuries, the ability of art to move, agitate, indulge, influence and greatly affect its viewer. “Great artworks […] invoke a sense of empathy in the viewer […] that something about that artwork triggers an emotion in the viewer, so […] they recognize themselves with the situation that the artwork is addressing.”

Denver residents had the opportunity to experience an example of this with one the DAM’s more recent exhibits, Common Ground: Photographs by Fazal Sheikh, 1989-2013, which opened back in August. Photographer Sheikh’s show displayed portraits of “displaced and marginalized communities” from all over the world during the last 25 years. The black and white portraits demonstrate the heartbreaking truth and reality of such circumstances, from an Ethiopian refugee camp in Kenya to an Afghan refugee village in Northern Pakistan. Common Ground looked into the eyes of women, children and men, forcing viewers to be faced with recognizing the humanity, inside each portraits’ face, that is so much like our own. The exhibit demonstrates that innate ability of art to place a lens over current events—such as war and politics—and evoke an emotional trigger in the viewer, much like Hart discussed. Here, a voice was given through art to those who may not be able to speak in the current politic context.

READ: DAM Brings the Lives of Refugees to Denver with Heart-Wrenching Photography Exhibit 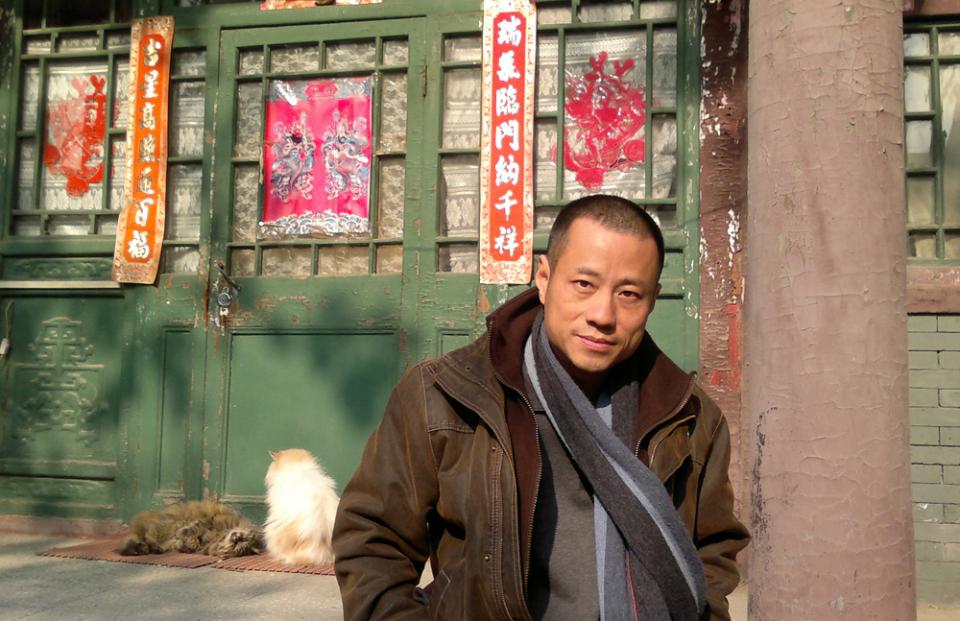 So, in times of seeming indefinitely political white noise, tension and chaos, should viewers, readers and listeners perhaps turn away from the traditional media outlets and try to look onward in order to look inward and find some clarity or opinion? Further, who would be some of the “creative politicians—the movers and shakers—the voices” of our present-day times that could be looked to?

Hart advises to keep an eye out for work from Shirin Neshat, Xiaoze Xie (who’s exhibit Eyes On—a commentary on banned and forbidden books in China—will be on display at the DAM starting at the beginning of December)  and Ai WeiWei. “One of the other artists who I’m watching is Wangechi Mutu. She was born in Kenya and her work began very much about tribal atrocities in Africa. It has matured to address wider issues: black women, the environment, how do we tell stories—it’s just a very rich practice. […] I recently worked with Mark Bradford, his practice insists that we remember the history and legacy of racial culture in America and poverty.”

As far as what Hart and the Denver Art Museum will be preparing for future exhibits with a political tone in the near future, Hart says to stay tuned. “There [are] lots of really great artists [here] because of the opportunities in Denver, through patrons, incubators like Redline, artist coops like EDGE or SPARK, the creatives that we employee here at the museum—there’s lots of opportunity in the entrepreneurial climate of this city.” 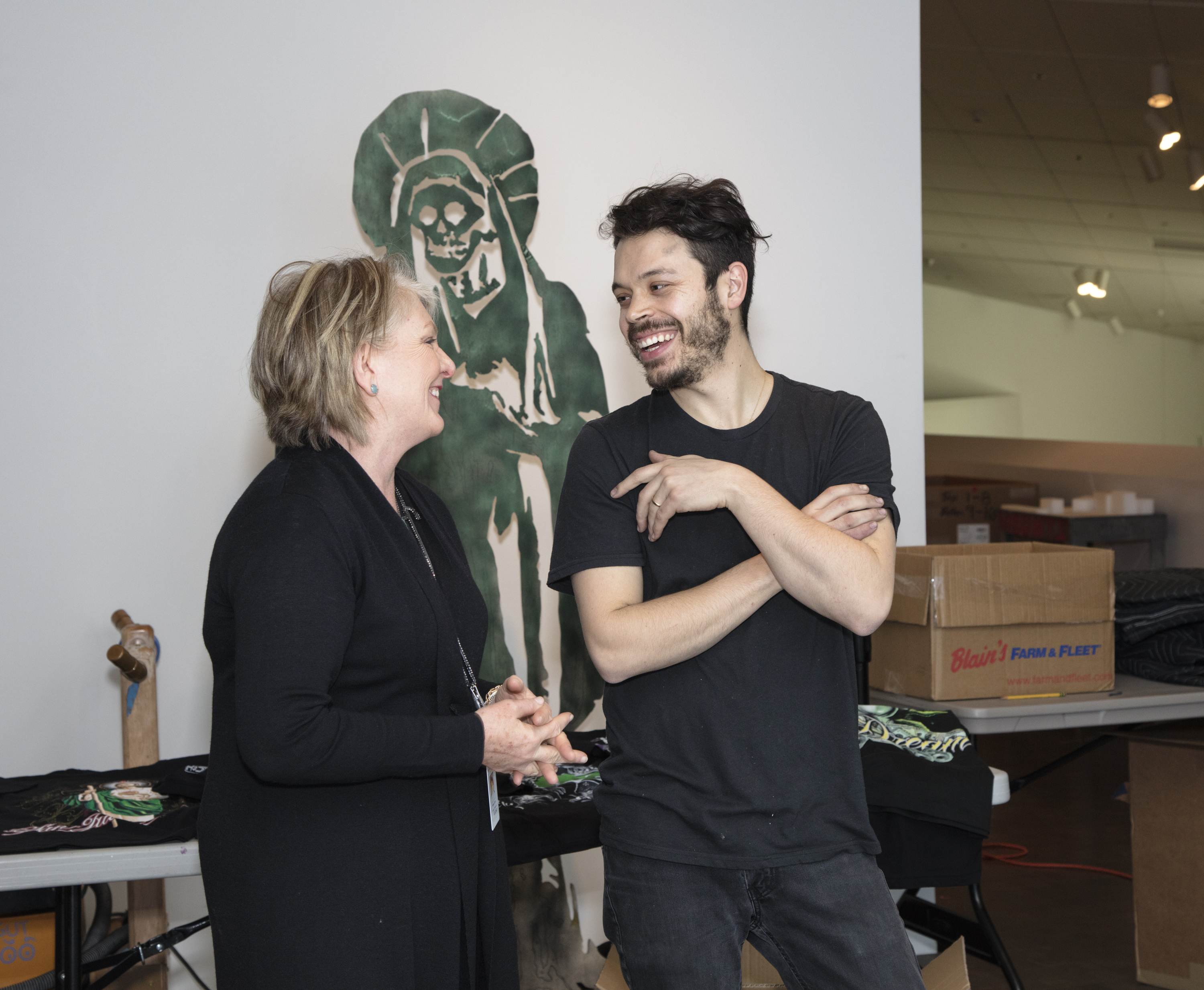 To learn more about some of the museum’s upcoming exhibits or other events surround local culture, heritage and politics in the Denver art world, visit the Denver Art Museum online at Denverartmuseum.org