Last night, Sound Tribe Sector 9’s (STS9) diehard fans came out for a once in a lifetime performance at Red Rocks. A lot of you may be thinking, “Well, it can’t be that special. Don’t they play there a lot?” Yes, they do – but regardless, it really was that special. Last night, STS9 performed their 2005 album Artifact in its entirety for the first time ever. The band is celebrating their 20th anniversary together with a three-night stay at Red Rocks where every night is something different.

“Red Rocks has become a second home to us and we’re thrilled to come back for three full nights. [On] Friday we’ll be playing ‘Artifact’ in its entirety for the first time ever…” – STS9 on Facebook

Not only are STS9 celebrating with three nights at Red Rocks, they opened a five-day art exhibit titled Artifacts this month at The Crown Collection Gallery. The exhibit closes tomorrow, September 10 at 2 p.m. They also hid a couple records around Denver with three-night passes inside each.

Back to Red Rocks – Nightmares on Wax brought the groovy beats, with heavy old-school electronic and hip-hop influence. Tracks were built with danceable drops – mellow drops that projected ambient tunes reminiscent of RJD2 (who Nightmares on Wax mixed). There were no laptops – just turntables. It felt like a celebration of the union of hip-hop and DJ mixing. 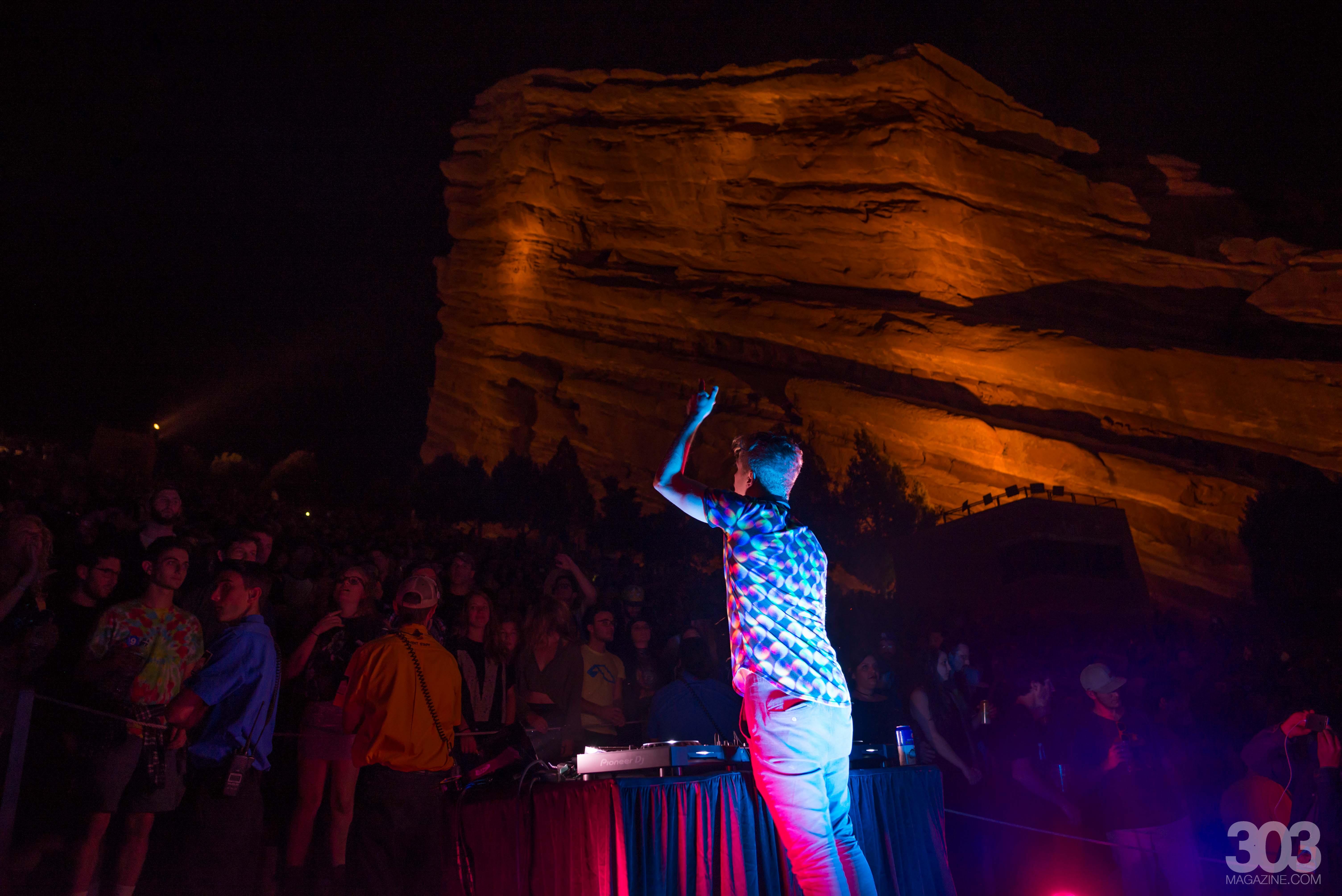 Moon Boots played an “In the Rounds” set from the middle of the crowd – where the soundboard normally is. He mixed funky-tropical house and pop beats, intertwined with catchy vocal samples. It was a wonderful dance set that provided the perfect feel good vibes just before STS9’s first of three nights at Red Rocks this weekend.

STS9 approached the stage nearly immediately after Moon Boots. Without a word directed to the audience, they dove right in. The band used recorded vocal backtracks to accompany their instrumentation and started with the introduction to the album, “Musical Story, Yes” but cut it short and moved into a version of “Tokyo,” which the band rarely plays live. Artifact was in full effect – playing their songs in order, but not exactly as you’d hear it on the album. STS9 merged their songs together seamlessly by transitioning them in different variations of the originals or jamming out for an extended period of time. They would even intertwine some of the songs, where the audience would hear a piece of a song at one point in the night, and then hear it again shortly later. It was a creative jam-session that didn’t feel like STS9 just playing the Artifact album. The band loosely played Artifact from beginning to end, followed by an encore. 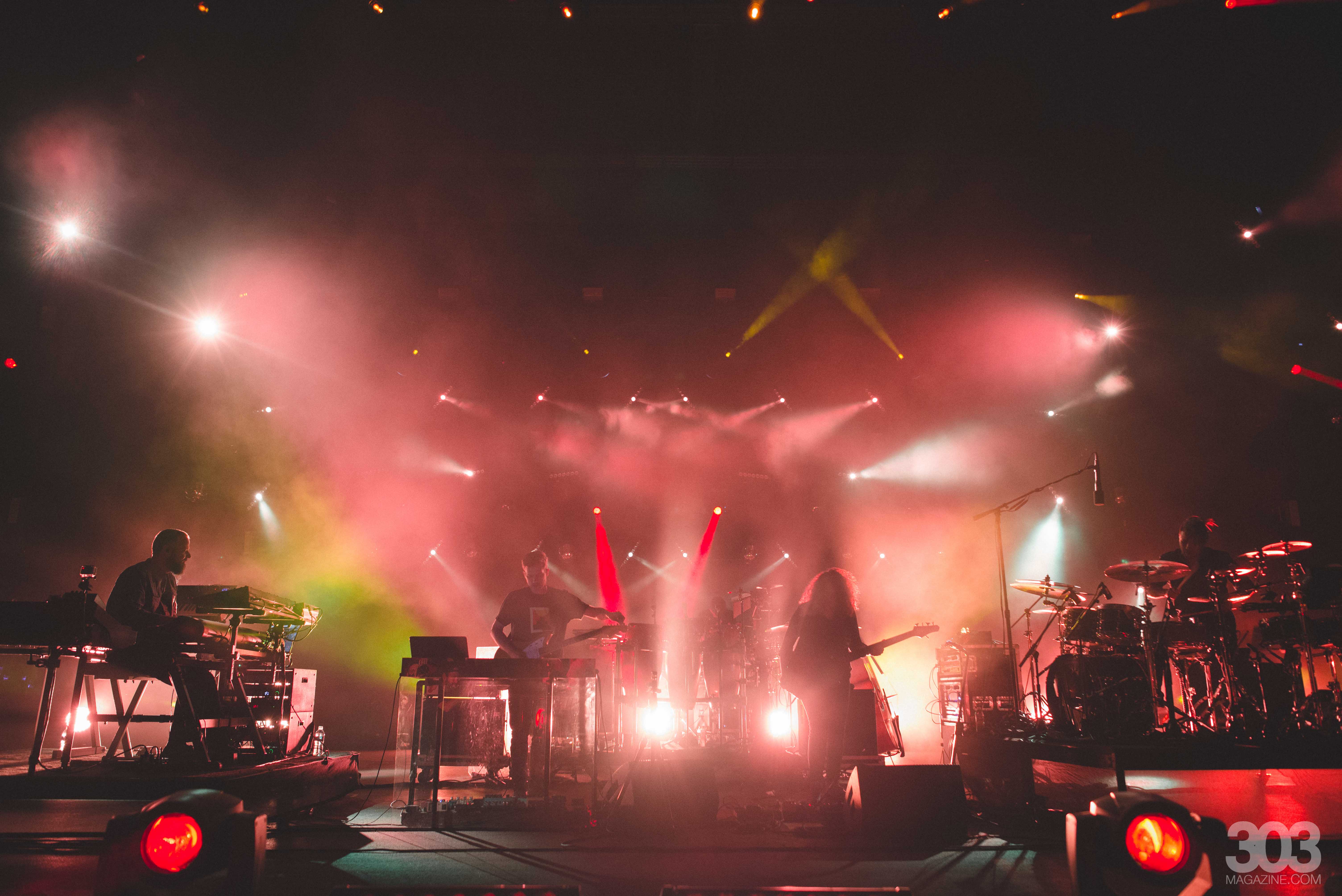 During “ReEmergence,” STS9 projected a collage of white silhouettes of people onto the Rocks. The band actually used the rocks a lot, while still having an incredible light show – something we always appreciate from a Red Rocks performance. Rather than masking the rocks with an elevated stage or LED screen, the band respected their natural beauty and used them to their advantage.

During the song “Artifact” it started raining, which felt like some sort of sign from the gods. But realistically, it was the perfect refresher that we all needed after an hour of dancing, with over two more to go. The stairs lining the stands were also packed with people sitting, standing and dancing. Fans everywhere were getting down. Although the show wasn’t sold out, the packed crowd came together to celebrate the anniversary of STS9 – even security made a few exceptions for the annual gig. 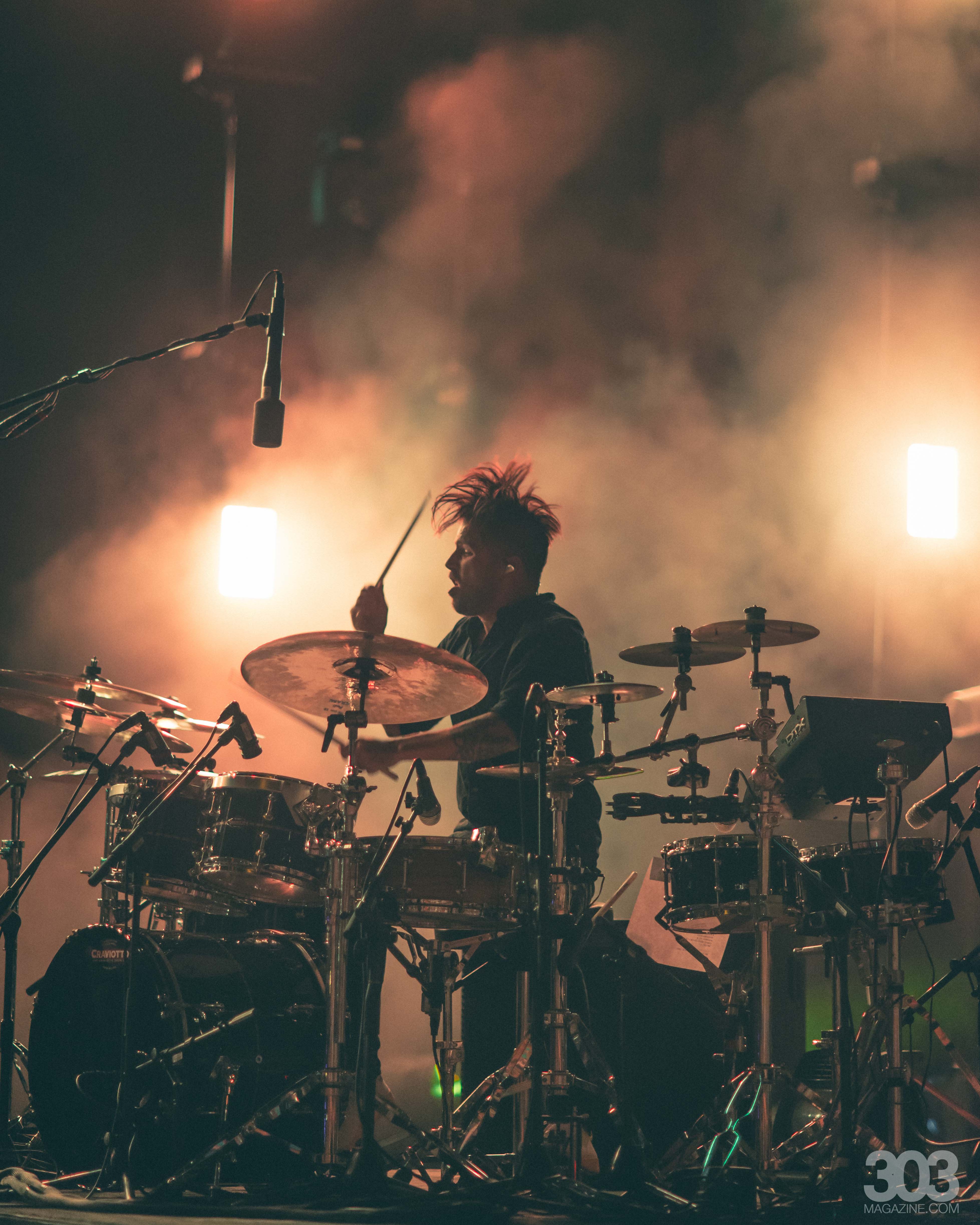 “Native End” was another highlight of the evening, packed with steel drums and bongos, which queued an epic dance party. The whole night was either pleasant or a party, but at most points the crowd maintained momentum. With that being said – to give everyone a break, the band took an intermission from 9:55 to 10:15 p.m., and returned to finish out Artifact.

The band played two sets, with a total of approximately three and a half hours of performing. Tonight, September 9, STS9 will continue their 20th anniversary celebration with two regular Sound Tribe sets. Tomorrow, they’ll play one of their “Axe the Cables” acoustic performances, stripped of electronic elements. Tickets are still available here.