From behind, it might be hard to tell the HAIM sisters apart. With middle parts on shaggy, ’70s-esque, long brunette locks, Este, Danielle and Alana Haim are each roughly three years apart but are also close friends. Imagine going on tour with your siblings. It might sound like a nightmare in the making for some, but HAIM has been amped about their sisterhood and girl power since 2006 — and people fucking love it. In fact, the sister act used to be in a band with their parents called Rockinhaim. HAIM [pronounced: high-im], the family surname, means “life” in Hebrew, and the sisters definitely gave the crowd just that on Wednesday night at the Ogden Theatre in Denver. Here’s what you missed.

“Did you guys know this is our third time to play this venue?” the youngest band member Alana (also known as “Baby Haim”) asked the audience. The sold-out concert hall screamed its praise as the completely dark stage lit up and the band opened with their first single from their new album Something to Tell You called “Want You Back.” Alana, guitarist and keyboardist, told the Ogden audience that Danielle (lead vocalist and guitars) used to tour with Julian Casablancas back in 2009-10, and after graduating high school, she and her sisters got to open for him at Denver’s very own Ogden Theatre — their first big gig. 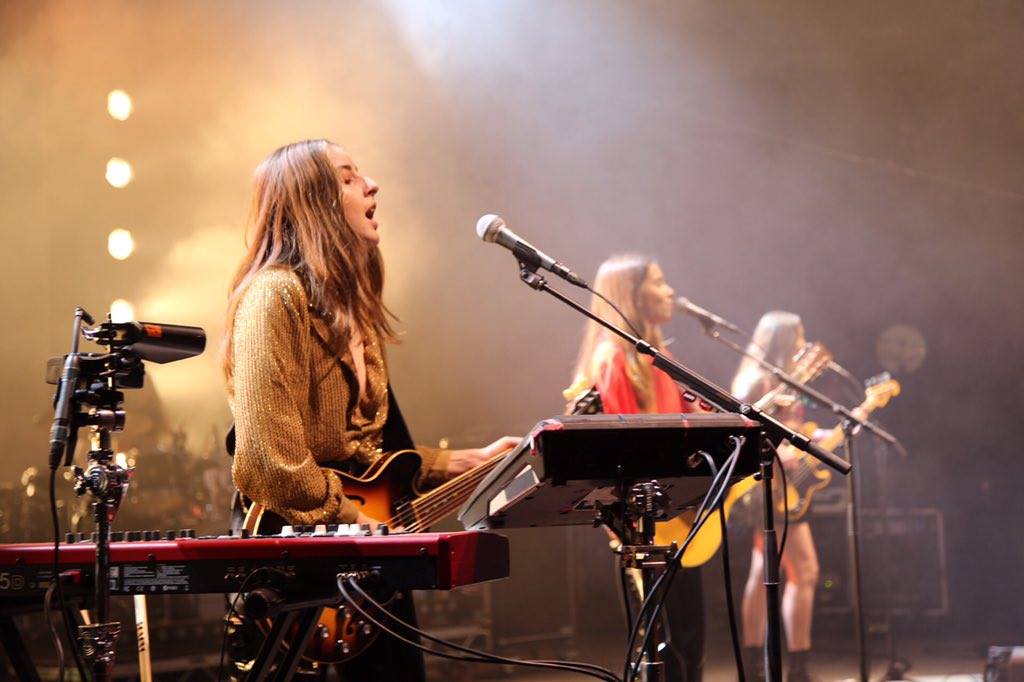 “That was our first show with Julian and now we’re here,” Alana said. “Tonight is going to be a magical night for all of us. I want to feel the energy in the crowd.” Not a person in the crowd wasn’t singing along to “Don’t Save Me,” a throwback to their 2013 EP album Days Are Gone, or belting out the newest remixed single “Little of Your Love.”

Red lights illuminated the faces of Este, Danielle and Alana – Este, the eldest, showcased her scowling signature “bassface” with an open frown large enough to eat her guitar as she strummed along to the rhythm. Danielle, the middle child, concentrated and hard at work with dexterous fingers nimbly setting fire to her guitar with the precision of an angry Beethoven. Alana, the youngest, smiled with such euphoric romance for the moment it looked like she might be high. 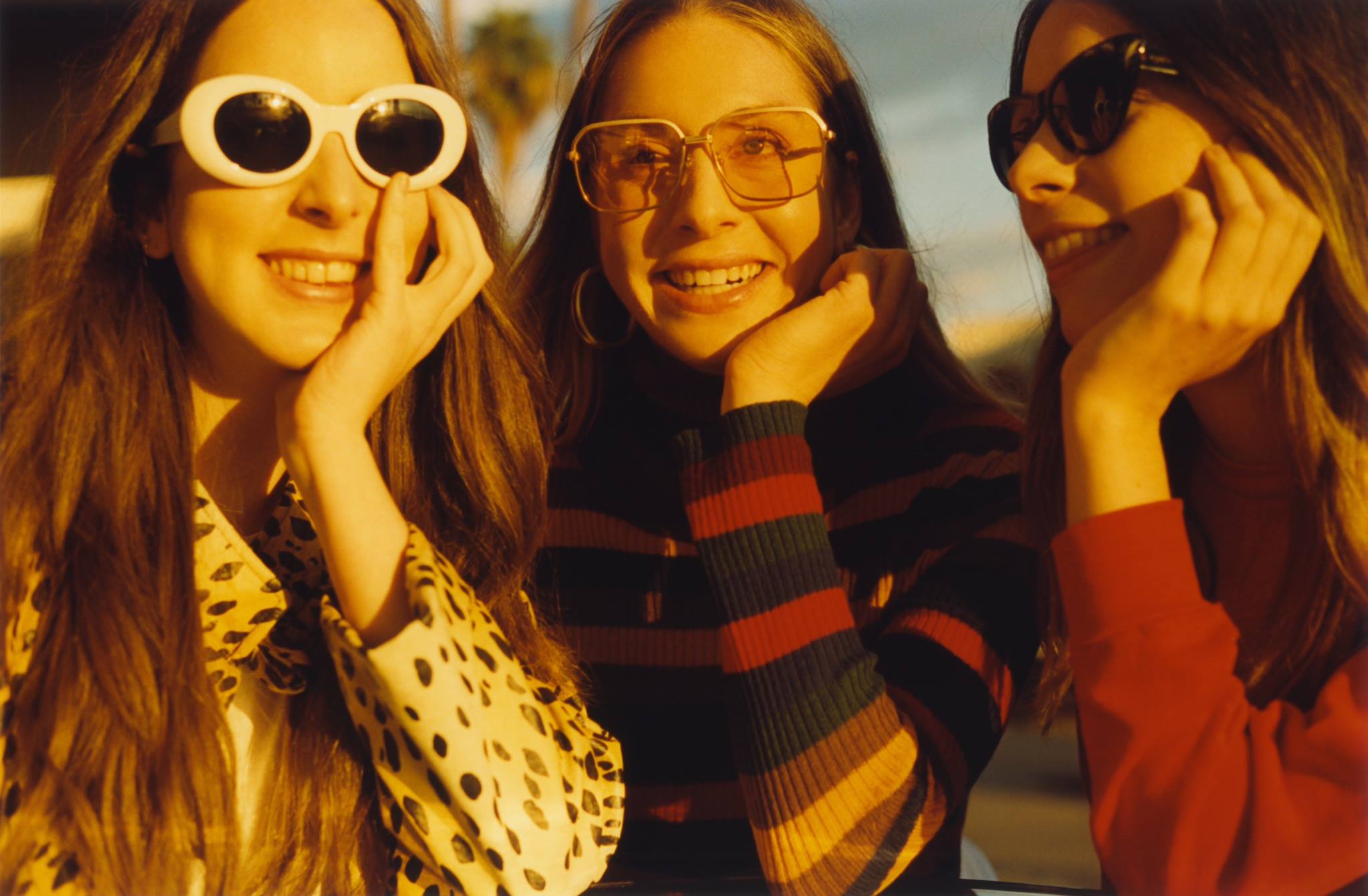 Although the sister group only has two albums thus far, they played back and forth from new material to the EP hits that brought them fame, and it was obvious that everyone knew all the songs. HAIM, known for their new wave of pop rock, features sultry hymns many compare to Fleetwood Mac — with some folk and hip-hop influence. Every song has a catchy beat and the lyrics are simple yet meaningful. (*Note: the writer of this article got over a breakup in college with Days Are Gone). The all-female band, which has been praised for being, well — all female — certainly brought on the girl power that people were expecting. The band also drew a wide range of audience members that came for the genuinely good music — from older fans to the expected teenage Taylor Swift squad fans (HAIM and the famous pop star are close friends), everybody was dancing like crazy as Danielle blew up the guitar. The girls even received thrown gifts from some fans — a joint with a note inside for Este and a shirt thrown at Alana.

HAIM added more girl power with their opener LPX (female solo artist Lizzy Plapinger of the former electric-pop duo MS MR). “We are so blessed to have that powerful lady of music. I’m all about the lady power these days. There are some sexy ladies out there. There are some sexy dudes too, but there are some sexy, sexy ladies,” Alana said. The vocalist, dressed in a bright red Joker-esque pinstriped suit to match her red hair, screamed out high notes as she moved around from lying on the ground to throwing herself at the audience for LPX’s new hits “Tremble” and “Tightrope.” The stage was sweaty before HAIM even got on it. The show had a lot of highlights, but fans got what they paid for when Alana took out her aggression on drums during “My Song 5” — a hit from the EP album that she says means a lot to her.

“This song is for getting out all the aggression I have in my life — everything that’s bad and everything that makes me angry,” Alana said. “I get it all out during this song and I know we’re angry. I know we have a little thing in us that is so angry. You can get it all out during this song.” The girls jammed so hard that Estes, who suffers from Type 1 diabetes, had to pull up a stool and play bass sitting for the next few songs. “Damn Gammy over here needs to sit down for this one,” she said. “I don’t know if any of you know this but I’m a Type 1 diabetic and sometimes I get onstage and my blood sugar gets high because of all the adrenaline. I have to sit down, but it doesn’t mean I’m not still with you guys.” 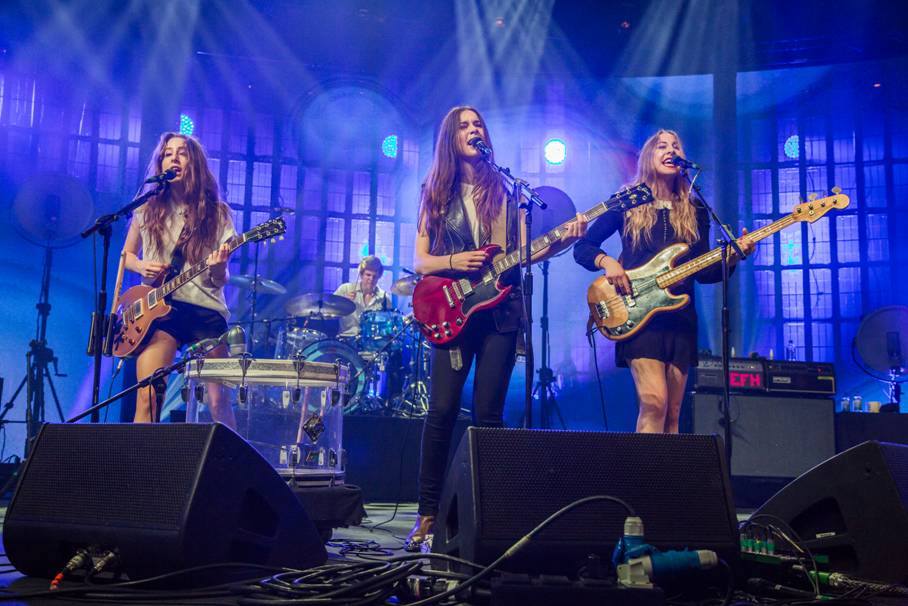 The sisters then told the audience they were going to play a cover by the one and only Shania Twain. “On this tour, we all came together as a sister trio and decided that we have to do Shania Twain, and I know that each and every one of you knows the words to this song,” Alana told the audience. When the girls started playing “That Don’t Impress Me Much,” Alana must have got nervous because she actually forgot the words to the song. Good thing the crowd helped her out. By the end of the night, everyone was at one big party — we even saw Este jump off her stool and shake it during a much-needed dance break with the choreography from their new music video “Want You Back.”

HAIM closed playing their hit songs “The Wire” and “Falling” from the EP and the audience lost their minds when the sisters simultaneously drummed — a feat that really showcased their musical talent. When they came back for a final encore of the emotional hit “Right Now” from their new album, everyone was bummed the show was over. Maybe a couple people even cried (the writer of this article did). Ogden Theatre was HAIM’s first real show, and we certainly hope it’s not the last time they rock that stage.