As of Tuesday, September 5, the pilot program dubbed Denver Day Works is expanding to the River North neighborhood (RiNo) for a trial run. The program, which started in November 2016 and runs through October 2017, employs local people experiencing homelessness to do work in places like Denver city parks and the Denver Library. According to a new report from Denver Day Works, the project provided employment opportunities to 200 people, with 76 finding permanent employment. The goal is to reach 300 people over the course of its lifespan.

For RiNo, the temporary three-week program will employ 36 individuals per week at $12.59 an hour. Those participating in the Denver Day Works program will help clean the area before, during and after the upcoming street art event called CRUSH, happening September 11 through 17, through groundskeeping, trash and litter pick up.

“With 100 new murals, over 100 artists from around the world, and upwards of 25,000 visitors during the week of the event, we wanted to make sure the area was welcoming to everyone coming to RiNo in the coming weeks,” said CRUSH Program Director, Lindsey Hendershot.

Also, while the program is temporary, Jamie Licko, RiNo Art District President, says that the area is hoping to make it permanent. 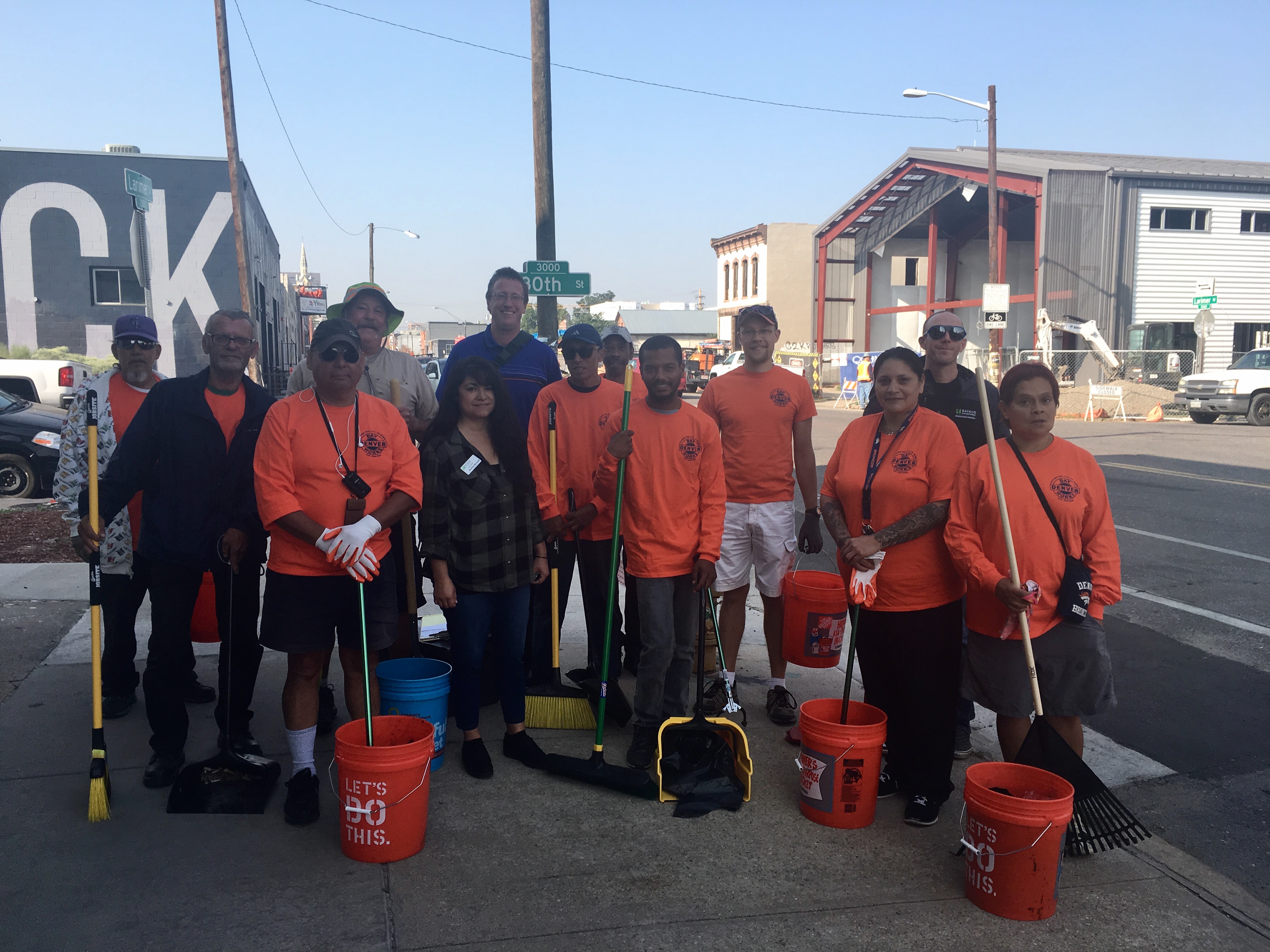 “Our neighborhood has needs that the Denver Day Works program can fill, and so this pilot partnership with DHS [Denver Human Services] to bring Denver Day Works here was one we pursued strongly. We want to create a sound structure that we can use to employ the help of these individuals on an ongoing basis in our district. We are committed to finding a way to make it a permanent partnership,” said Licko.

RiNo businesses are also committing to the program. So far Denver Central Market, Crema Coffee, The Rackhouse, The Preservery and Wolf Properties have agreed to help feed and provide facilities for the workers. (Both Denver Central Market and Kenneth Wolf of Wolf Properties recently came under fire after an incident with Joe’s Liquor which accused the liquor store of attracting and over serving customers that were presumably homeless).

The program has also faced some criticisms in regards to its funding. As described by Denverite, only $100,000 out of the $400,000 is used for wages. The rest of the funds, which are provided by Denver’s Human Services, Parks and Recreation, Public Works and Denver’s Road Home, are used to support costs such as supervision, support and outreach. This part of the program is operated by Bayuad Enterprises, a non-profit aimed at helping people overcome barriers to employment.

The disparity is caused by a cap on how much an employee can earn. Currently, the employed can only earn $600 (50 hours of work) while employed for Denver Day Works. However, after they hit the cap the program will try to place them in more long term employment. “Due to the nature of a supported employment program, it’s important to be able to offer direct support through employment specialists and benefits navigation and provide connection to resources like housing, food and other services for the participants,” explained Amy Fidelis, deputy director of marketing and communications in an email.

With the most recent update, $83,000 have already been allocated in wages out of the $100,000. This leaves just enough to fund this work in RiNo and extend the program to last until its October 31 date.

“We are taking the necessary steps to be able to continue programming past the October 31 date, but those details are not yet finalized,” said Fidelis.

[Update September 8 at 1:10 p.m]: The program has since updated their limits for the Denver Day Works program. It’s no longer based on a monetary cap of $600. According to Fidelis, “Any new participant can rely on 10 weeks of work, once weekly. After this, they can be ‘stand-by’ for five weeks, in case someone doesn’t show for the day.  These are not hard and fast limits, but can be modified if someone has issues with a placement, or the timing is better to extend for just a few weeks. The purpose of these guidelines is to fairly engage with as many interested people as possible, given our wait list of 70 people.”