Review – Portugal. the Man, LP and more Closed Out FMQB’s Triple A Conference

The Friday Morning Quarterback (FMQB) Triple A Conference wrapped up their three-day lineup of performances this past Friday, August 11. The Boulder radio station hosted the conference, now in its eighth year, in order to highlight some of their top-played artists and who they’ll feature in this year’s playlists. With a free outdoor stage and ticketed events at the Fox Theatre, the conference made itself accessible to everyone. Over the course of the weekend were performances by Future Islands, Foxygen, Spoon and many more. But a lot of the magic happened between the sets when one could walk around downtown Boulder to catch one of the free shows, grab a bite and happy hour drinks and even find Portugal. the Man members chowing down at Illegal Pete’s. Get caught up with our reviews of night one here and night two here. 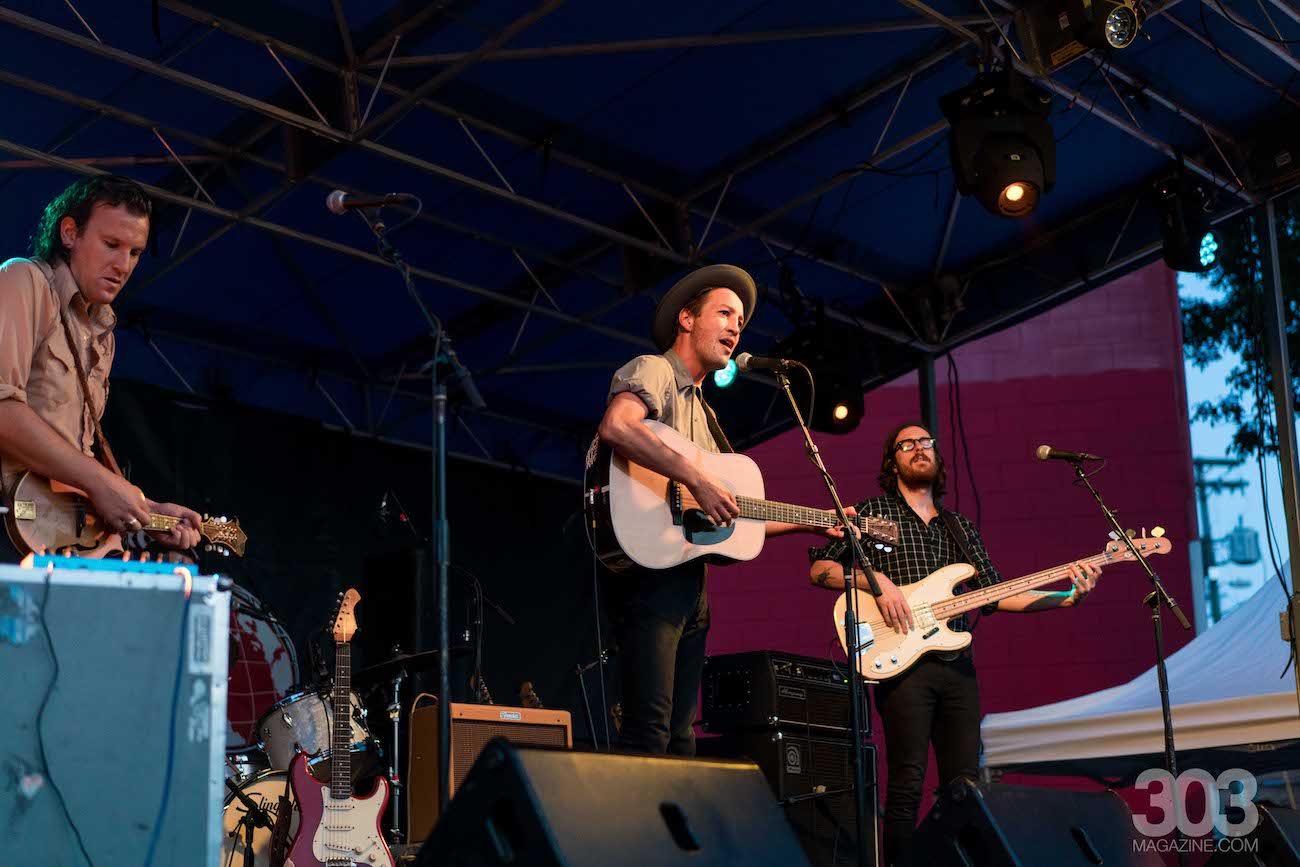 Marlon Williams kicked off the free outdoor stage at 8:15 p.m. The upbeat folky vibes were the perfect start to the evening. The New Zealand artist offered serenading and soulful vocals accompanied with the occasional harmony — all paired with acoustic and not so acoustic instrumentation. Meanwhile, The Fox Theatre was setting up for their first performance of the evening, The Shelters. The punk rock groups singer had his hair slicked back and wore a white tank topped off with an unbuttoned short sleeve tee giving off the best greaser vibes. They claimed it smells a lot better in Colorado hinting at the first of many marijuana references of the evening. The band has a killer stage presence — not because they were head banging or fist pumping, but rather dancing a bit, grooving their shoulders and shaking their hips. It was old school meets new school and we loved it. 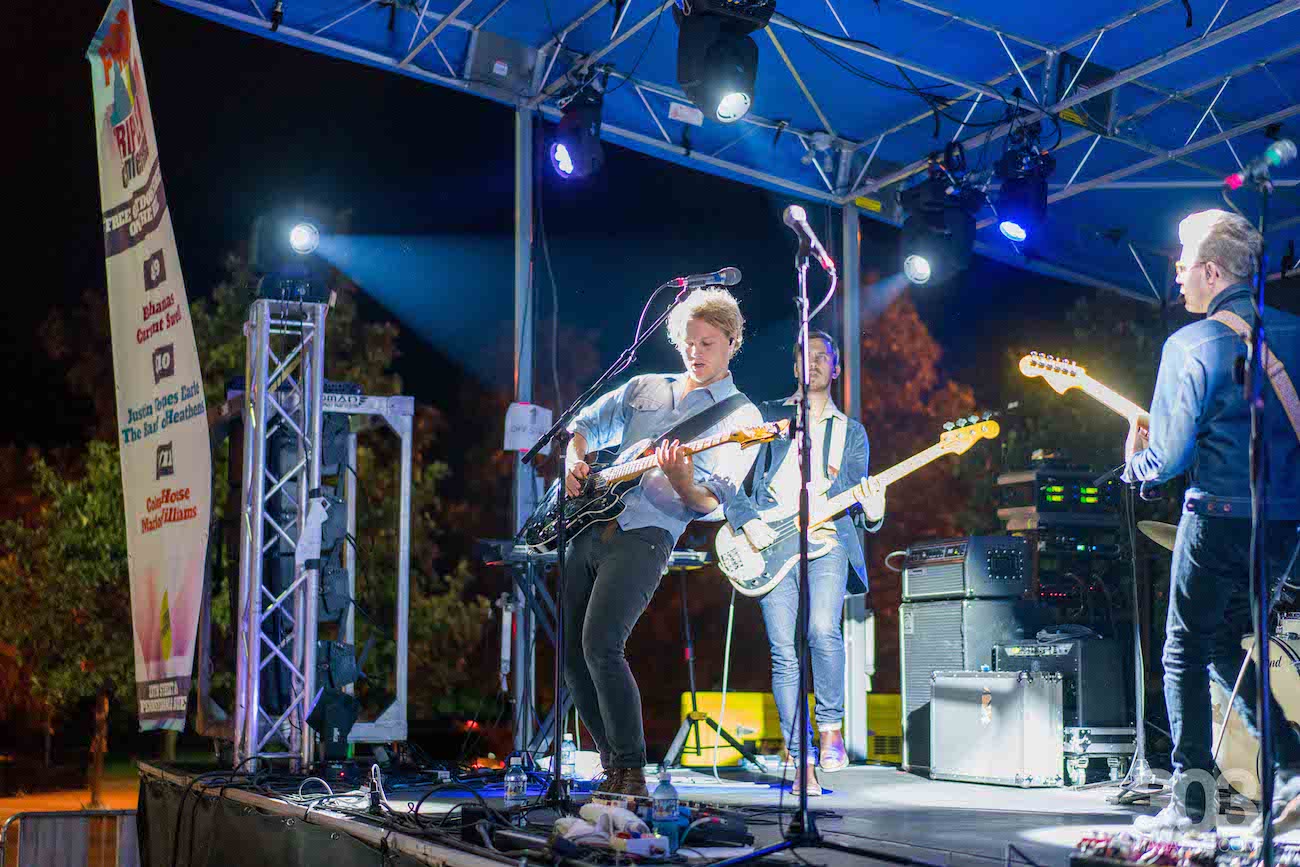 Colony House from Nashville was next up on the free outdoor stage, closing it down for the night. Their chants and upbeat guitar solos were reminiscent of early ’00s alt rock and pop punk. Heavy percussions got the crowd moving, with the help of the band’s own inspirations — their stage presence was lively, to say the least. They also played one of their songs because someone offered them $20. Now that’s incredible fan dedication.

Before Portugal. the Man took over the main stage, LP offered funk and soul vocals intertwined with falsettos and even a little folk and country influence at times. There were many ambient transitions between songs including times where the pop-rock star would whistle — holy shit can she can whistle. The multi-faceted artist played the ukulele, guitar, tambourine and some impressive harmonica. LP put the word “effortless” to the test when it came to falsettos, hitting jaw-dropping notes without fault. She had one of those voices that you hear live and consider that you may be listening to a recording because it’s too good. But it wasn’t a recording. It was just damn perfect. 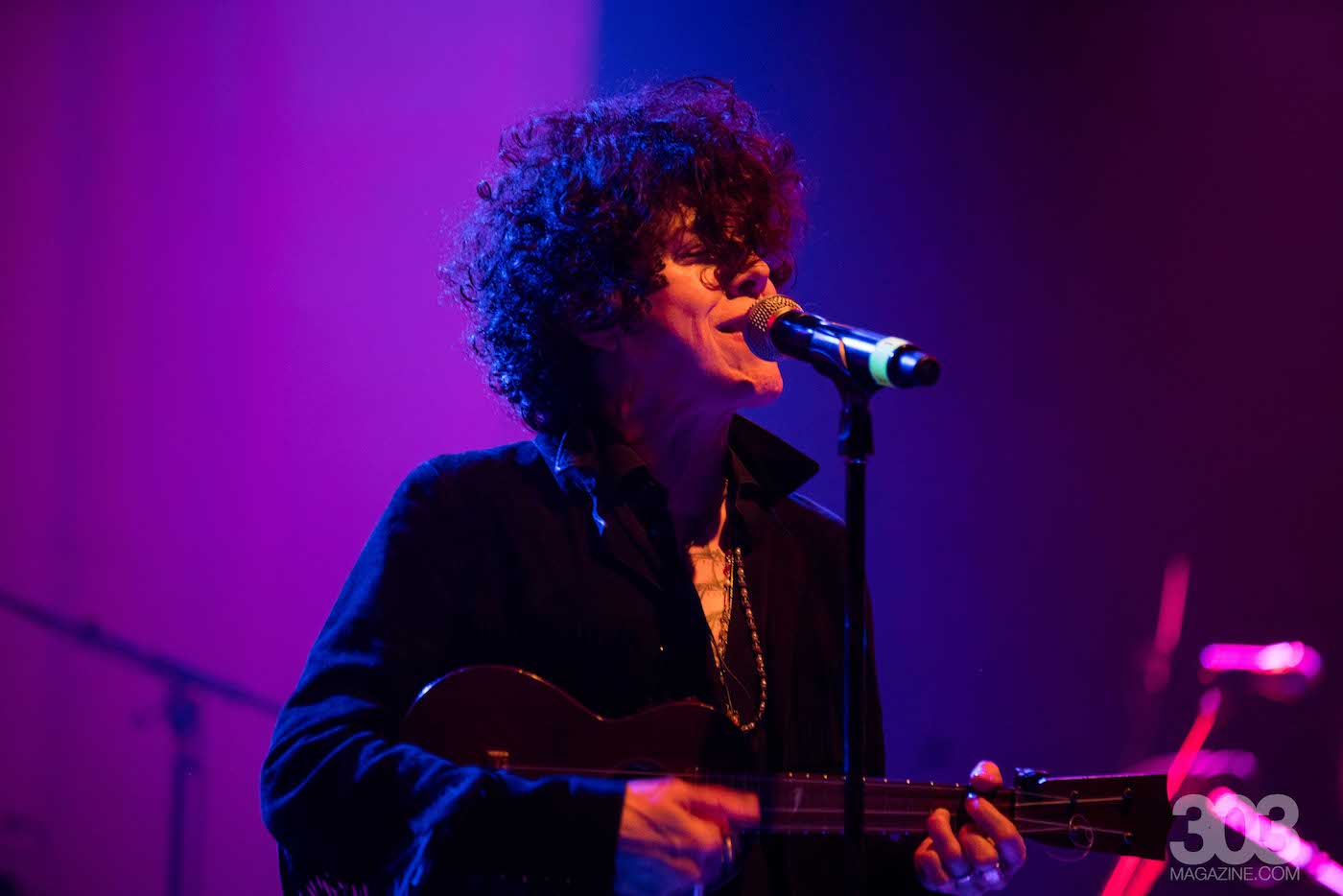 For anyone who was at Portugal. the Man’s most recent Red Rocks show — the set was pretty much the same. Now, there were a few things that differentiated this performance from their 2017 Red Rocks show — the band occasionally flashed text on top of the psychadelic visuals, almost as if it were being projected as some sort of subliminal messaging joke. Throughout the show, the band flashed phrases like “Kanye is broke,” “Young Thug has no fashion sense” and even a series — “Y’all like smokin’ weed?” “gettin’ fucked yo?” “discussing politics at family gatherings?” “that’s bad ass.” Second, they didn’t play “Feel It Still” twice, nor did they play “Rich Friends” at all (which we’re not mad about) and seemed to spend more time getting lost in extended jam sessions. Lastly, frontman John Gourley was not accompanied by wife Zoe Manville who occasionally plays shows with the group. 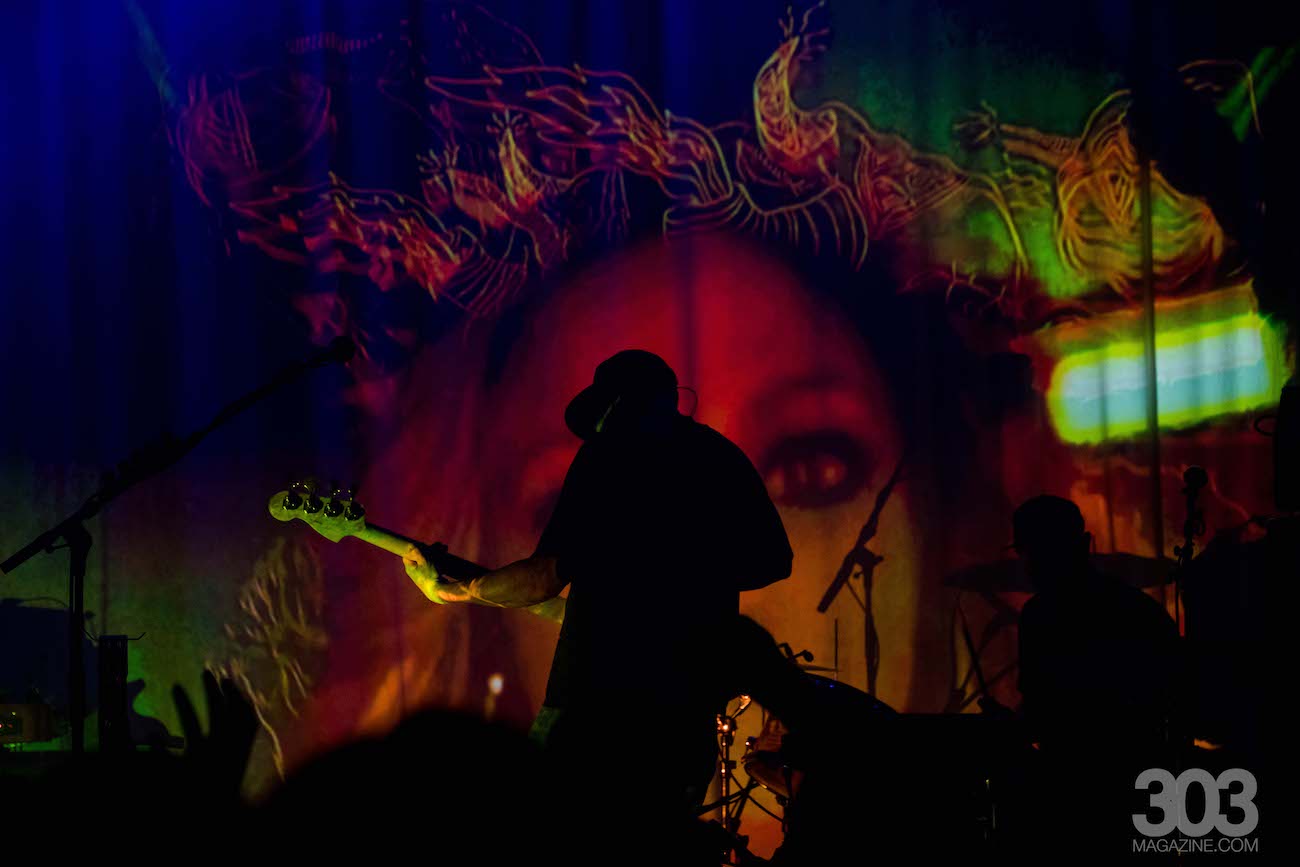 The visuals were eerie, psychedelic and fun, all being projected in front of the band so that they cast shadows adding an element of their own to the lighting. They played most of their fan favorites with the exception of a single full Satanic Satanist song and “Sleep Forever” which was recently cut from their setlist. But hey, the band has eight studio albums under their belt so there’s only so much they can play.

READ: What You Need to Know About Portugal. the Man’s New Album

Portugal. the Man ended their show with “global smash hit” “Feel It Still” where the word “Resist” flashed on top of the visuals. Earlier this year in an interview with 303 Magazine, keyboardist Kyle O’Quin said, “I don’t like it when people push religion on me or push their politics or beliefs on me, and in that light, we want to share our beliefs without it being pushy.” It seems they succeeded in doing that — never mentioning a political word during the set, rather jamming the fuck out and slipping in occasionally hilarious sarcastic-feeling subliminal messages.

Zach Carothers, bassist for Portugal. the Man, returned to the stage with the band and said, “Every time we play this place something fucked up happens. Nothing fucked up has happened yet, so we’ll play a better song.” O’Quin noted that his family was in the crowd and that they only had three minutes left before they got kicked off stage. At this point, they were 23 minutes past midnight — when they were scheduled to wrap it up. But they encored with an extended version of “Atomic Man” that had to have been at least six more minutes, and it was oh so satisfying. After an impressive Triple A Conference from day one to these final moments with Portugal. the Man, we have to say — we’re already looking forward to what’s in store for next year. 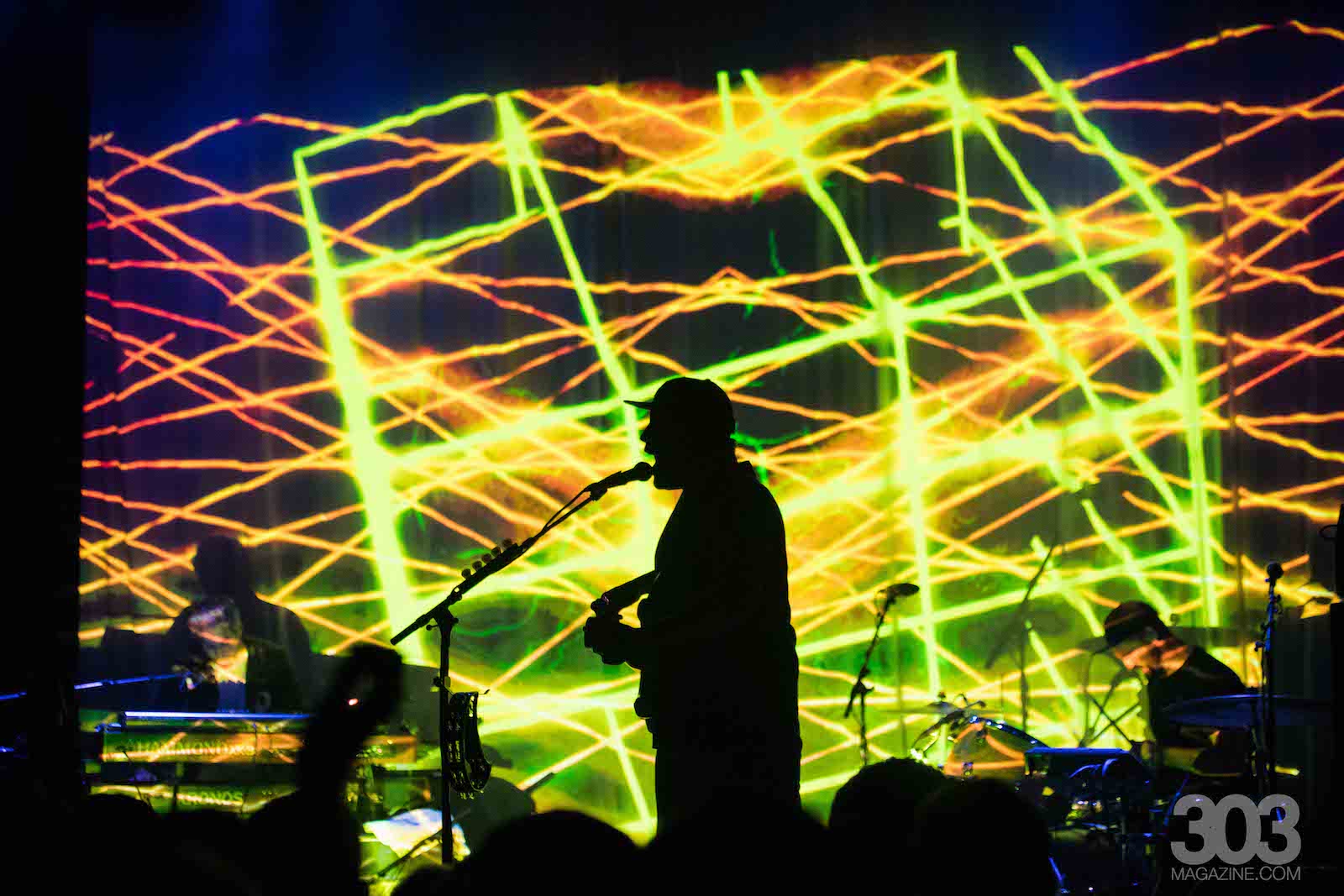