Review – Constellations Presents the Possibilities of Love in the Multiverse

Imagine you are at a barbecue and find yourself awkwardly engaged in conversation with someone whom you are quite attracted to. There are the typical introductions, the flirtatious dialogue centered around mundane, every-day topics like the weather and occupations. If you are lucky, each of those moments held in the span of one single conversation compound to create mutual interest. And that mutual interest compounds to create a relationship, which then becomes love, which then endures the myriad of life’s challenges culminating in a touching tale of the pair of you swinging into old age side-by-side, hand-in-hand.

Or what if it doesn’t? Perhaps the tale that began with an awkward conversation simply ends there. Or perhaps that meeting goes on to create a love story filled with tragedy and regret. Each choice made in each moment from that single meeting on has the possibility to create thousands upon thousands of various outcomes. This idea is exactly what Constellations, created by playwright Nick Payne, explores. 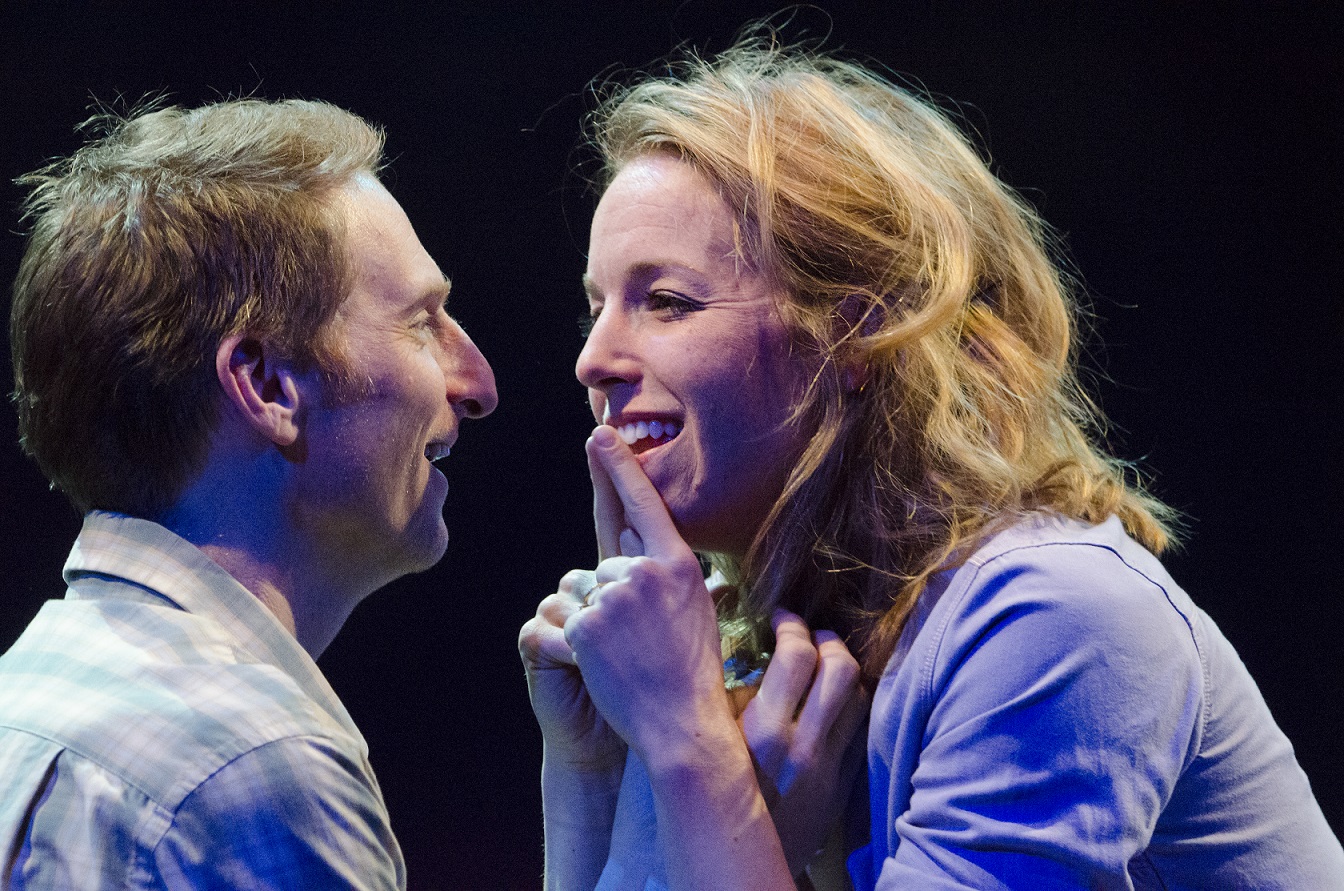 Constellations made its Denver debut at the Curious Theatre on March 11. Kelsey Didion plays Marianne, a Cambridge-educated theoretical physicist opposite Brett Aune as Roland, an avid beekeeper. The pair meet at a barbecue where, through the play’s premise based in String Theory, a multitude of outcomes from that meeting are explored.

String Theory is the idea that the universe is made, not of microscopic particles, but rather formed of even smaller strings that vibrate and spin in 11 dimensions of space and time. These strings are theorized to move within an infinite number of parallel universes, creating a Quantum Multiverse.

It is within the Quantum Multiverse that we are given poetic glimpses into the possible outcomes of Marianne and Roland’s love story. The 70-minute production is comprised of brief glimpses into various moments of their relationship, exploring a series of “what ifs” in fast-paced snapshot scenes. 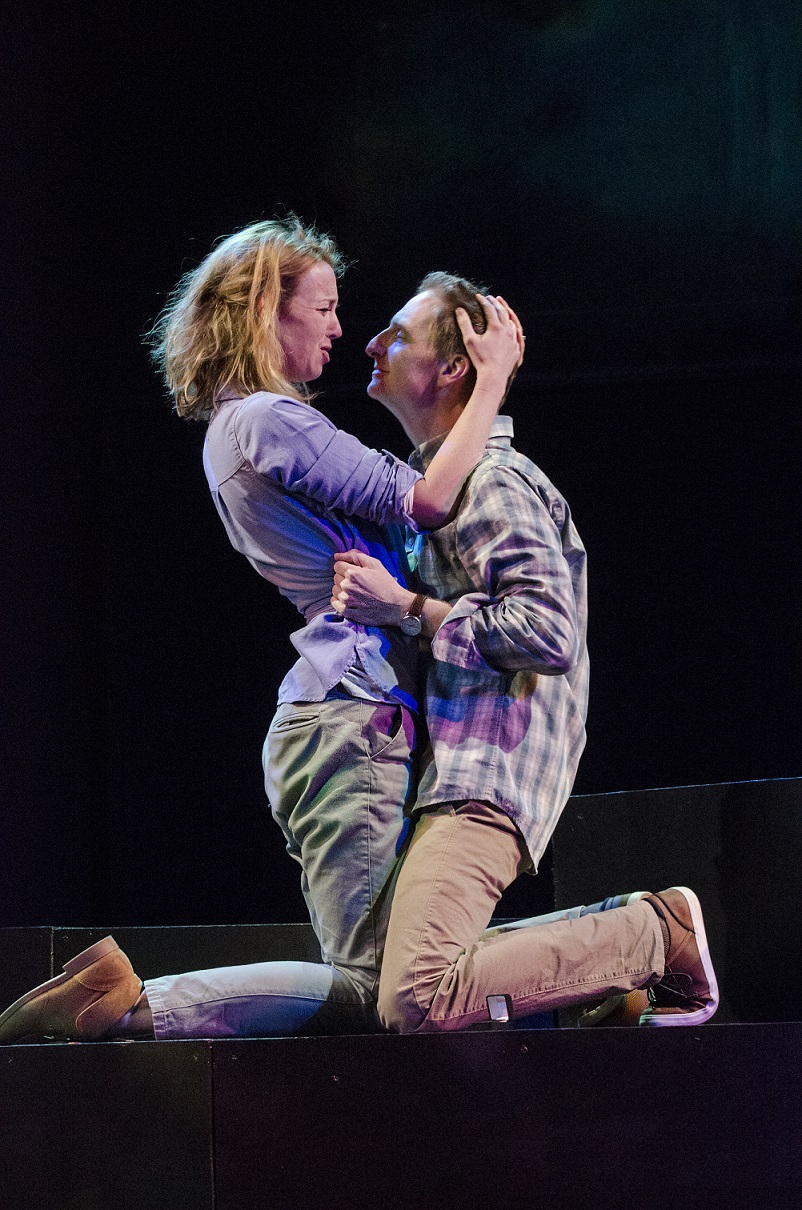 Marianne and Roland, played by Kelsey Didion and Brett Aune, share in the celebration of the possibility of engagement in Constellations. Photo courtesy of Curious Theatre.

Each scene presents a challenge for the actors to shift between realities within seconds, something that Didion and Aune pull off brilliantly. The repetition of dialogue could be exhausting in any other hands than those of Payne’s, but is so full of wit and realism that the audience is quickly enraptured by the actor’s delivery.

There is no official setting of Constellations, save the nebulous and minimalistic atmosphere created by a digital backdrop. The lack of scenery leaves the success of the production on the shoulders of the performers, which are exquisitely executed from universe to universe. The chime of a bell and the punctual lighting play out as a third character, moving each scene artfully from one to the next. The ambience of this third, unseen, character establishes a grounding point for the audience to navigate the multiverse along with Marianne and Roland.

Director, Christy Montour-Larson’s vision of Constellations is innovative and engaging, taking what could be easily portrayed as a cliche romantic comedy to a whole new level. In each universe, Marianne and Roland explore the nuances of love with such realism that it is impossible for one to not identify with the characters if you’ve ever been in love. 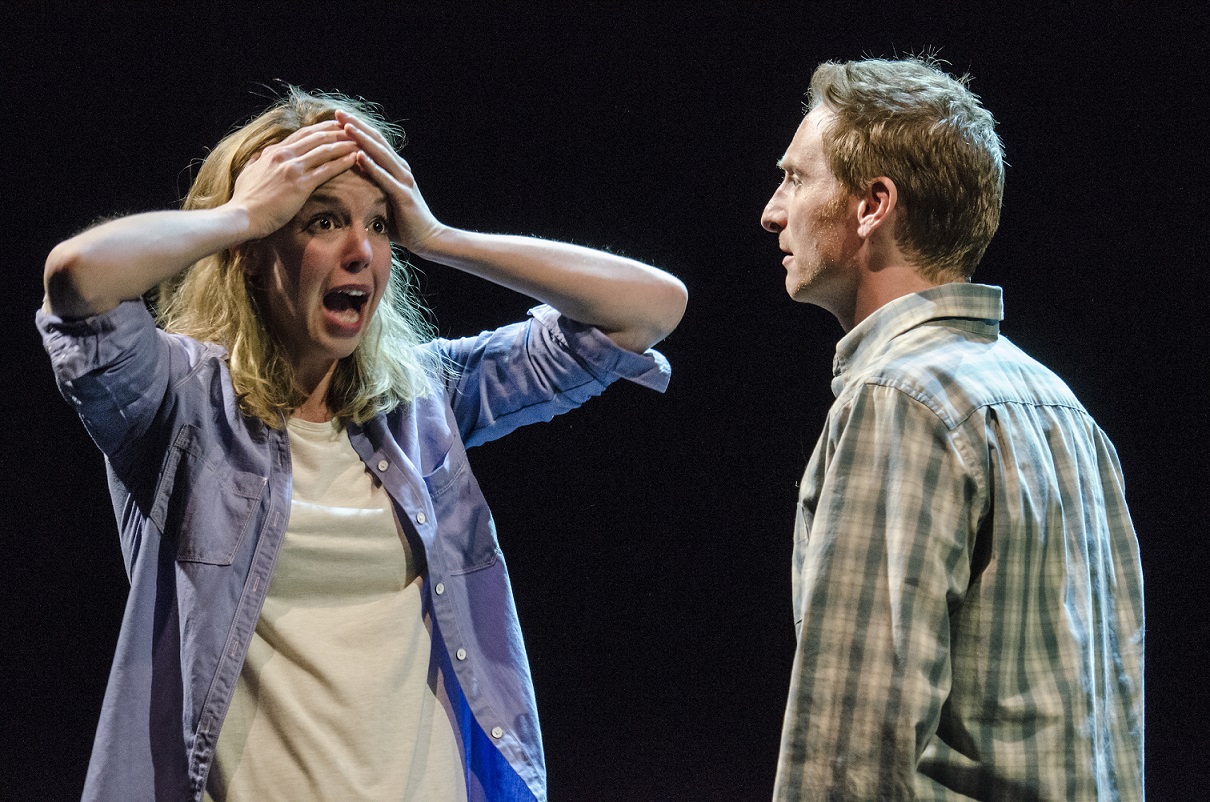 The complications of love and death overwhelm Kelsey Didion and Brett Aune, as Marianne and Roland, in Constellations. Photo courtesy of Curious Theatre.

Not every universe we find Marianne and Roland residing in is one of lighthearted happiness. There are real struggles of infidelity, insecurity and ultimately life and death. It is precisely this raw realism that draws the audience into their story. By the end of the play, we are all longing for more.

Constellations is the perfect piece to kick off the 20th anniversary of Denver’s Curious Theatre. The artistry of the entire production is presented with a refined complexity in its simplicity that is truly unique. If you’ve ever been in love and wondered where you might be if it weren’t for that single moment in time, that smile, that clever bit of intriguing and flirtatious conversation, you must explore the possibilities presented in Constellations. And if you’ve never been in love, Constellations will leave you believing in the myriad of love’s possibilities in this universe or the next. 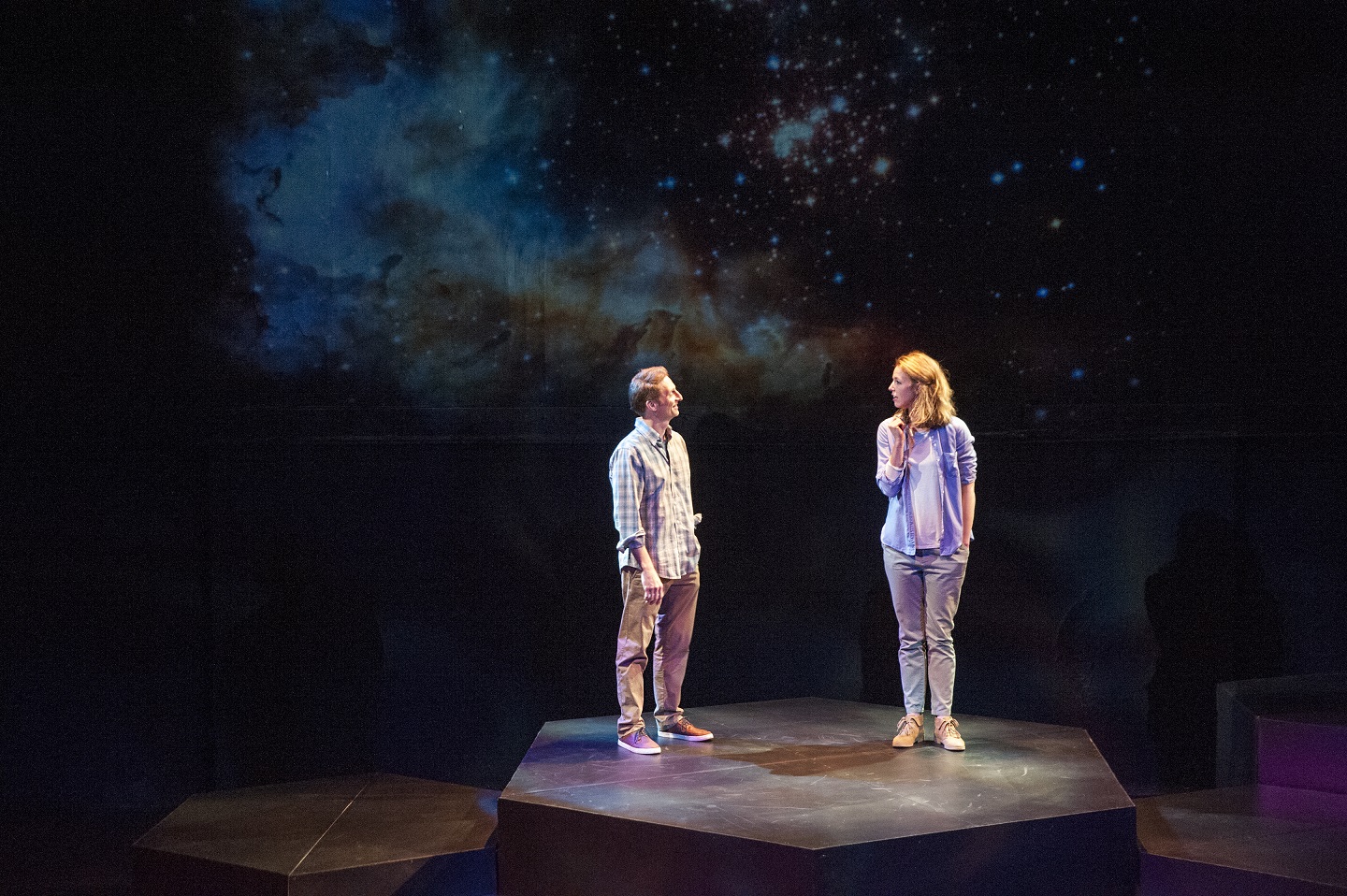 Kelsey Didion and Brett Aune in one of many multiverses as Marianne and Roland in Constellations. Photo courtesy of Curious Theatre.