The Lowdown on This Weekend’s Rally for Muslims

Brittany WergesFebruary 2, 2017Lifestyle + Culture
Photo by Danielle Webster.
Home
Featured
7 min read
Another large political event is brewing this weekend with the “Protect Our Muslim Neighbors Rally.” Much like the Women’s March on Denver, the event sprung up on Facebook and in a relatively short amount of time has amassed thousands of potential participants (19,000 to be exact). While it’s unlikely this event will congregate enough like-minded souls to rival that of the Women’s March, it will likely create a stir in the city and beyond. Denver protests like that at the Denver International Airport, which was created out of similar frustrations with the Trump Administration’s ban on refugees from Muslim countries, have gained major media attention like that of the New York Times for their impact. So as a way to not underestimate the will of the Denver citizen, we tracked down the event’s organizer Queen Phoenix to give us the lowdown on the rally—happening this Saturday at Civic Center Park from 1 to 4 p.m. 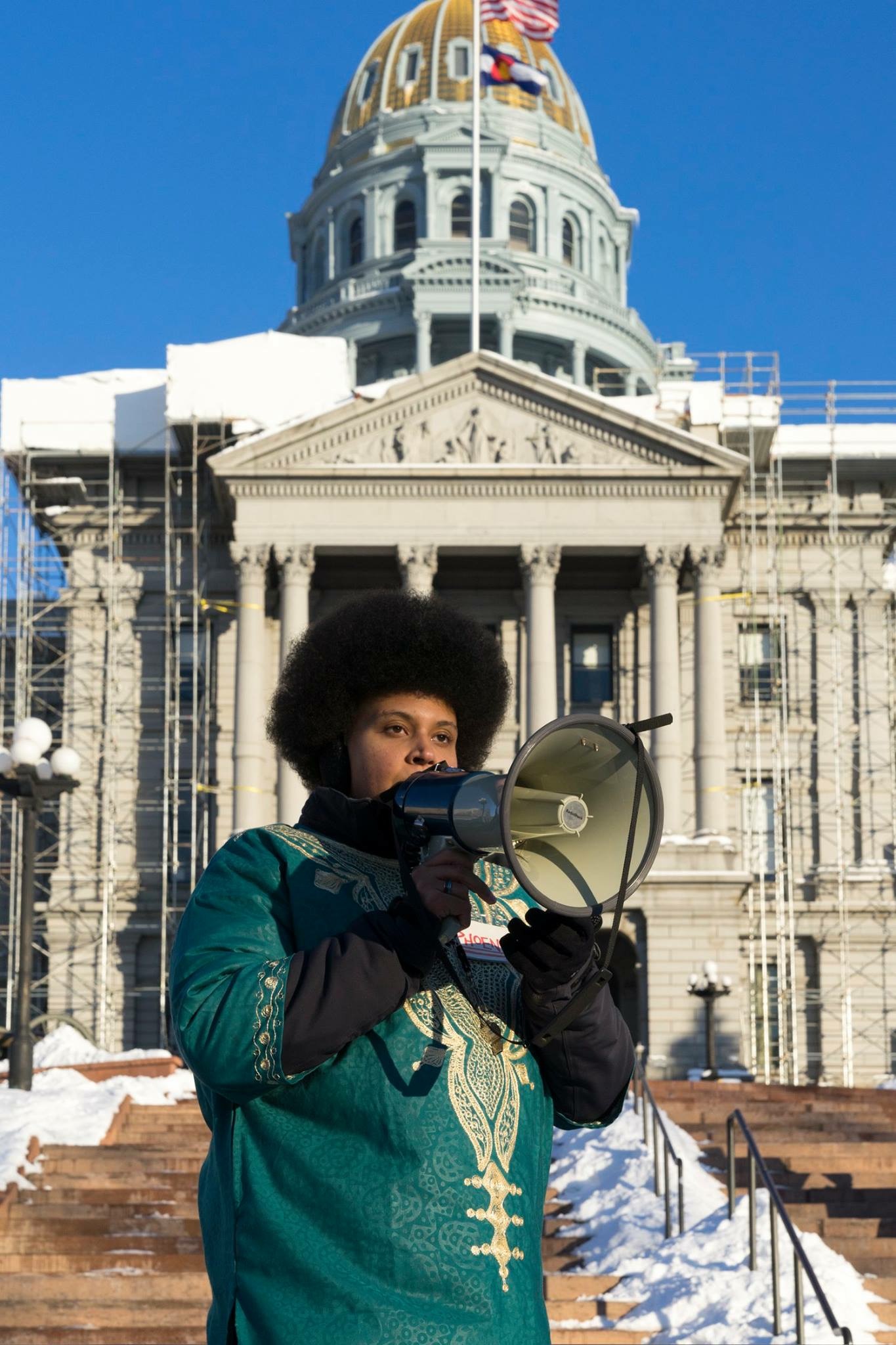 Queen Phoenix: Queen Phoenix, also known as Dezy, is a full-time peace activist who recently moved to the city of Denver to evoke change across the nation. As a queer, female-bodied, androgyn of color, Phoenix moved here from their hometown Milwaukee, Wisconsin in hopes of finding a better quality of life. After the election of Trump, Phoenix has spearheaded the movement Community for Unity – a peaceful collective of neighbors focused on administrative, environmental, social, and educational reform. Our goal is to provide a safe space for people of all colors, ages, physical abilities, gender expressions, orientations and spiritualities.
303: From your perspective what is the goal of the rally and what does the march hope to accomplish?
QP: The goal is to help create an understanding of the Muslim community while showing the community that we are here to support them as our rightful neighbors.  The root of most of the Muslim fear that is plaguing our nation is pure ignorance and lack of understanding.  We hope to send the Denver community home with knowledge about their culture so we can spread acceptance.  We also hope the Muslim community goes home feeling like they can safely walk to the streets, safely pray wherever needed, and safely worship in their mosques.  We want the Muslim community to own their narrative of peace and love, instead of the ignorance that is being spread since 9/11.
303: Will there be speakers? If so, what will they address?
QP: We have a whole line-up of speakers, poets and musicians.  Each will represent a different theme.  We have Muslim speakers, speakers on their families and deportation, speakers on the law and new bills to protect us, speakers on making pacts of peace, and we will even allow our Muslim community to do their Asr prayer led by the Imam in the middle of our rally, as we peacefully protect their space to do so.

“Separately, we may be minorities. But together, we form the majority.” 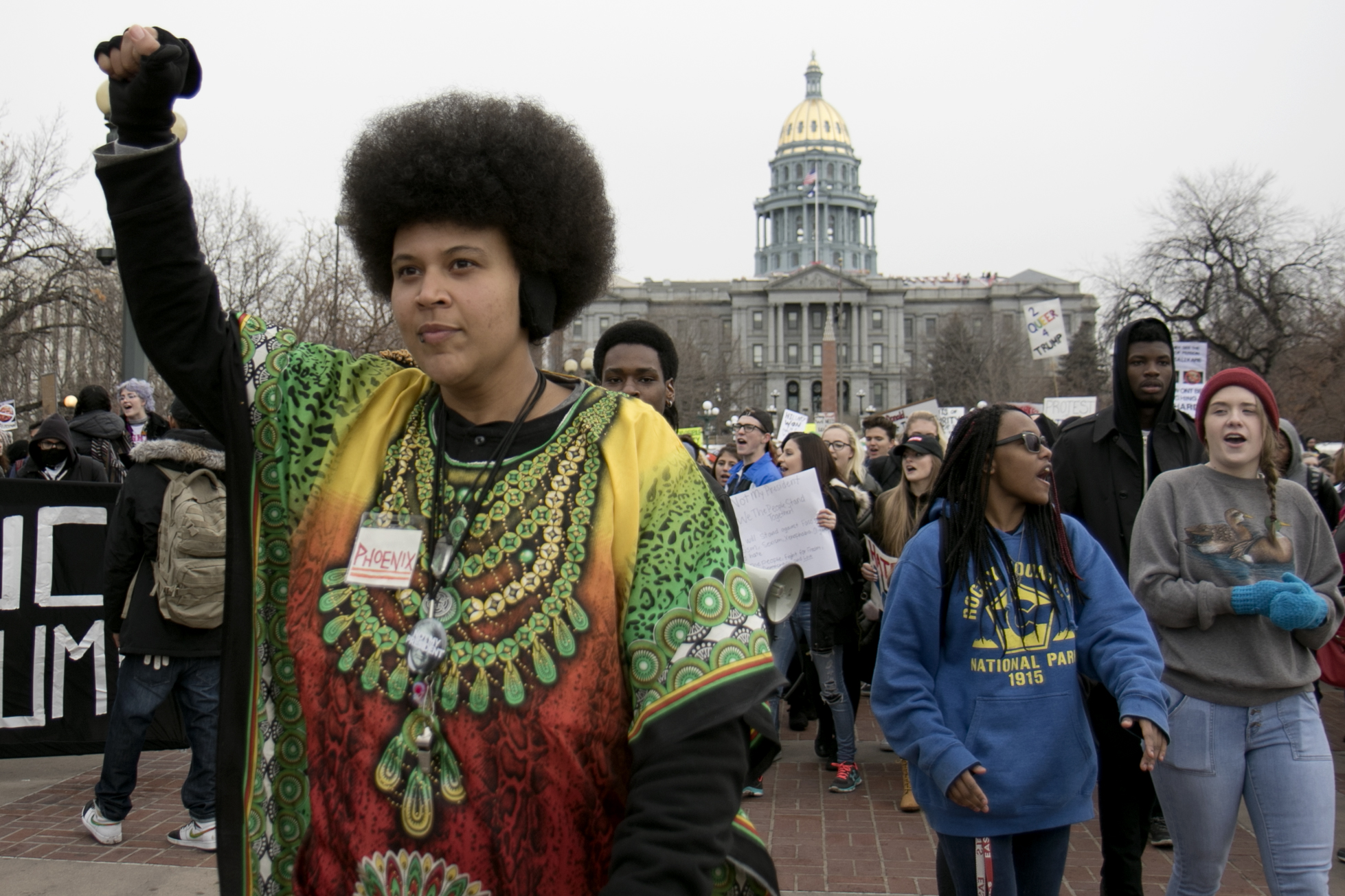 30303: What is the main thing you want people to know about the rally? Or any potential misconceptions you might want to address now?
QP: Well, this event actually isn’t a march.  We made this event a rally so we could have quality time to teach people and give the Muslim community a chance to speak to Denver.  Sometimes marches are appropriate, but I thought a rally would better get our messages across for this event.
303: Why are attending marches/rallies important?
QP: It is important to attend activist events because they only make a strong impact with the power of people.  I can plan an event and show up by myself and make little impact.  However, if I reach out and get thousands upon thousands of people to attend, that is newsworthy and attention-worthy.  It shows that the majority of the people are in disagreement with something.  The media has a way of swaying people to think that protestors are the minority. Separately, we may be minorities. But together, we form the majority.
303: What does it mean to be an activist?
QP: It means living for others, not just yourself.  It means truly committing to not being a bystander and allowing those in power to push us into immoral and unjust realities.  A true activist not only stands up for injustices that deal with them personally, but also for any injustices against any group of people.  A true activist sees the beauty in all life.  A true activist knows that every life is precious: humans’, animals’ and our planet’s.
303: What should people do/ bring?
QP: People should come with an open mind and an open heart.  They should bring signs that voice their opinions. I always tell people to bring water and extra layers, so we keep our bodies safe and healthy.  People should also be weary of who they give their information to at these events.  I’ve had an undercover officer show up to my events since November, trying to get people’s Facebook information for surveillance.  As much as I want people to trust their neighbor, people need to know the risks.
303: What should people not do/ bring?
QP: People should show their support to communities that differ from their own.  However, that doesn’t mean they need to dress or act like that community.  Instead, we need to show our support as the unique individuals that we are.  We are protecting the constitution as the diverse people we are, so there is no need to role play.  People should also completely ignore anyone who is trying to rile up the crowd in a negative way.  The only truly successful way to stop poor, potentially violent behavior from hate groups is to completely ignore them.  “Ignore the ignorance,” as I say.  We do need to create dialogue with these people to teach them compassion and humanity, but if they are already in an angry place of attack, it’s safer to just ignore it until their tempers settle.