The Great American Beer Fest (GABF) awarded gold, silver and bronze medals in 97 style categories this year. A medal signifies a successful adherence to a set standard in quality and can be a powerful marketing tool as well as a certification of excellence in the beer world. More telling than the awards were the variety of beers on display and the devoted fans that formed lines at booths for a single ounce of beer despite nearly 800 breweries participating — which is exactly why we’ve created a list of trends to expect in the next year. 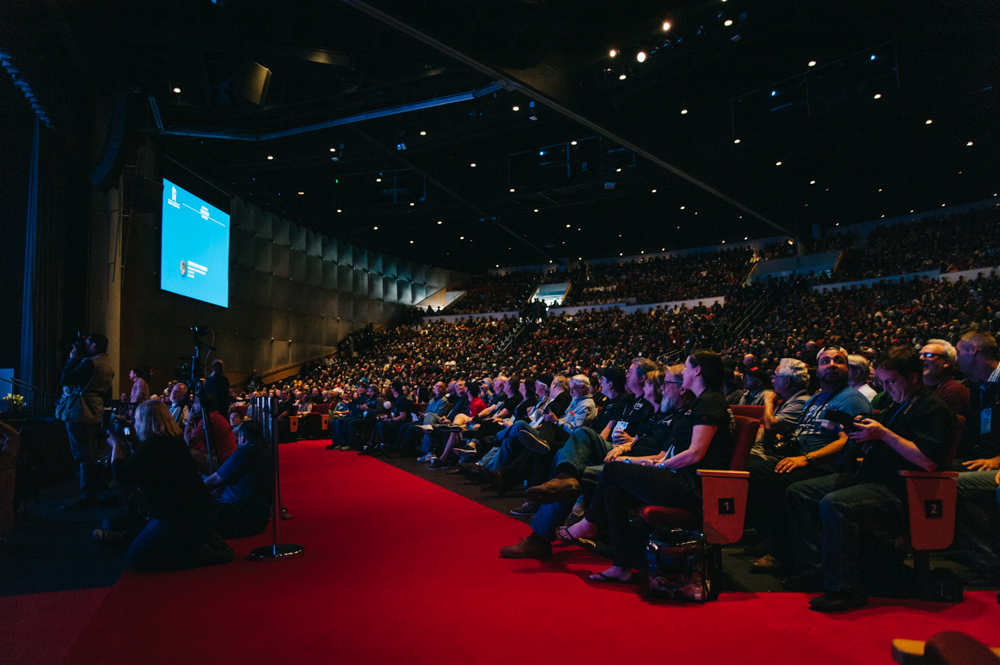 The awards ceremony took place in the Bellco Theatre on Saturday Morning.
Photo by Lucy Beaugard

American-style IPAs are still the highest-entered category, but the number at each booth did seem lower. Additionally, the focus wasn’t necessarily on the biggest and bitterest but on drinkability and balance. Rather than pile more and more hops into the kettle, breweries also looked to differentiate through special ingredients and mixed fermentations for the first two trends.

For all of the brashness and bitterness of West Cost IPAs, New England IPAs  (NEIPA) offer a softer mouthfeel and are known for higher levels of citrus and less overall bitterness. They aren’t within an official style category for GABF, but I wouldn’t be surprised to see them in coming years. 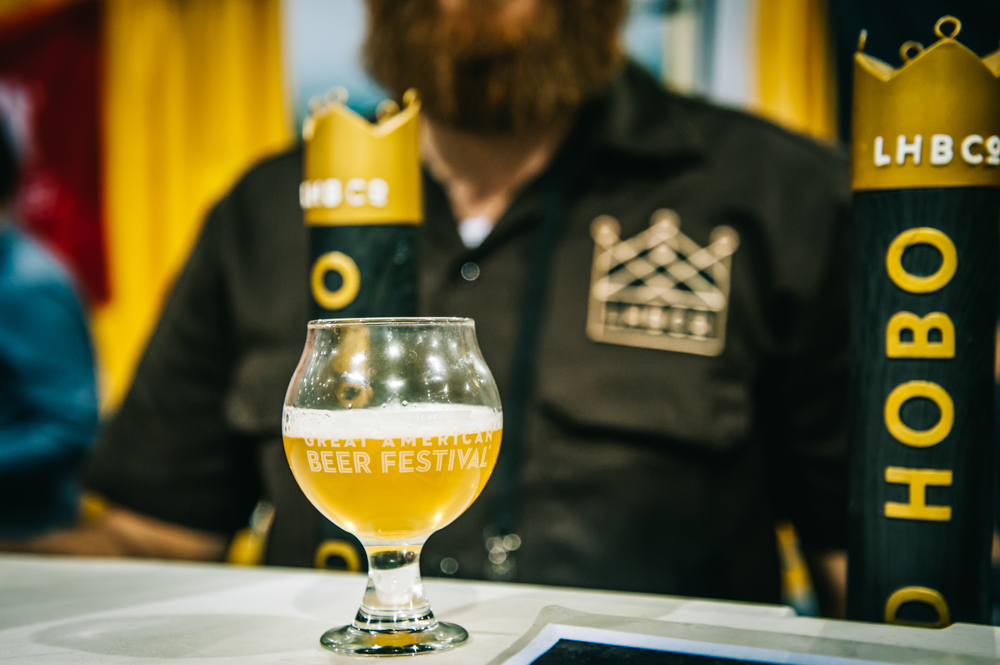 This Imperial IPA drinks more like a blend of an IPA with a blonde ale — not too harsh in bitterness and with a refreshing, citrus character. The beer is actually a blend of three of their other IPAs, and although not specifically referred to as a NEIPA, it is definitely within that realm for drinkability. 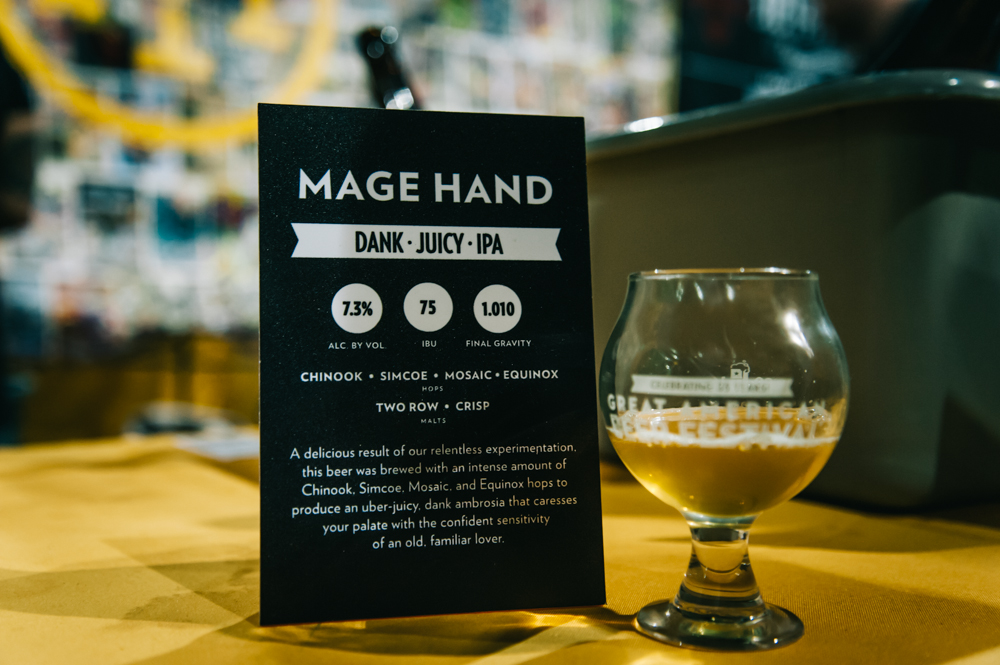 Orange creamsicle comes to mind when drinking this beer. The bitterness is fairly subdued, but less so than other versions. Vanilla creaminess is quite evident, along with fresh orange zest. In past years Modern Times stuck with their year-round core brands, but for the first time brought along their intricately-made sours, spawned from the mind of the man who literally wrote the book on American sour beer. 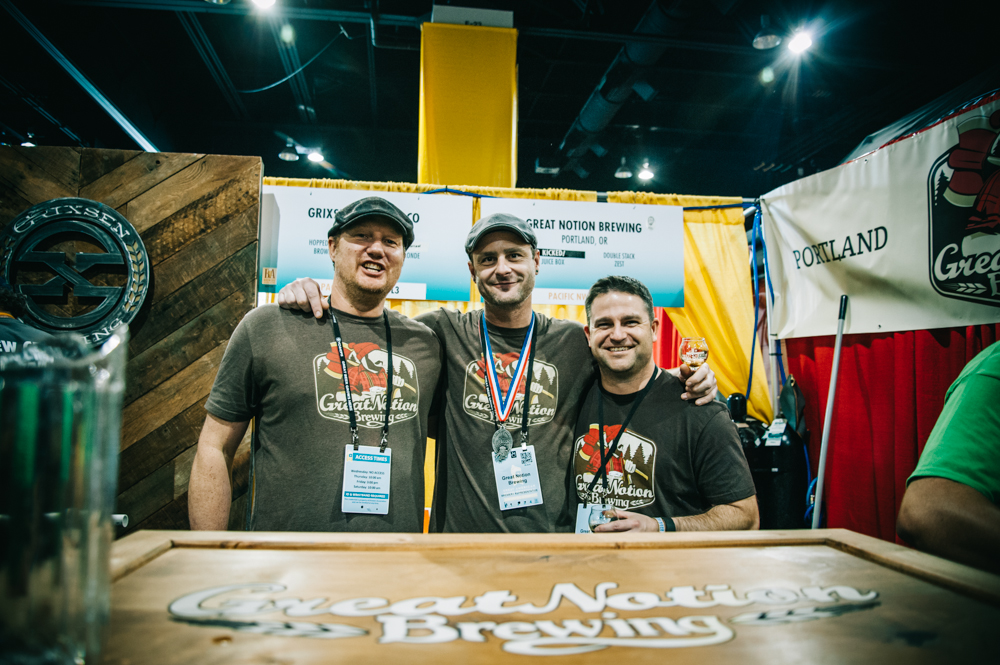 Although Great Notion is as about as far away as you can get from New England, they are still taking a nod from their East Coast counterparts with Juice Box. This beer went fast in each session, and rightfully so. This Imperial IPA has very little bitterness, and the bitterness it does have comes across more as pithy than the pine you get from West Coast versions. Like the name suggests it is heavily fruit-forward, bursting with tropical fruits and fresh peach.

Barrel-aged beers and fruit additions may be more prevalent among sours and big, boozy offerings, but several breweries utilized these ingredients for truly unique IPAs. The best versions weren’t overly bitter, but rather used ingredients that complimented the classic IPA flavors. 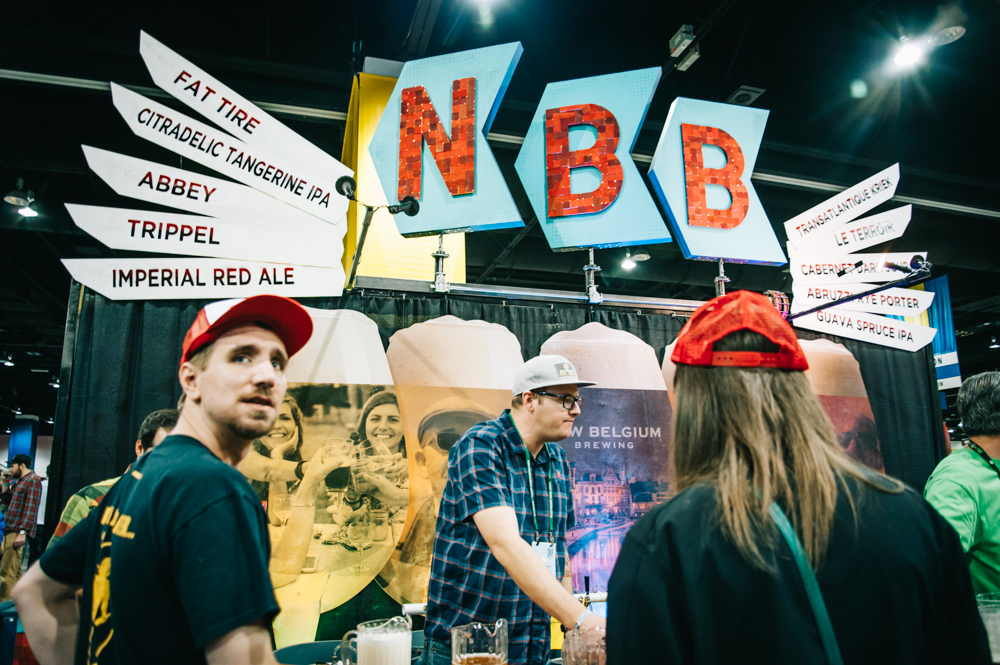 A perfect example of melding special ingredients with already-recognizable flavors in an American IPA, guava spruce simply turned up the dial on pine and tropical fruit. Breweries are continually looking for the next variety of hop with unique flavors – especially fruit-forward ones that are coming from New Zealand – so Guava Spruce achieves both the bitter pine flavor seen in classic West Coast IPAs and the juicy fruit characteristic from New Zealand varieties. 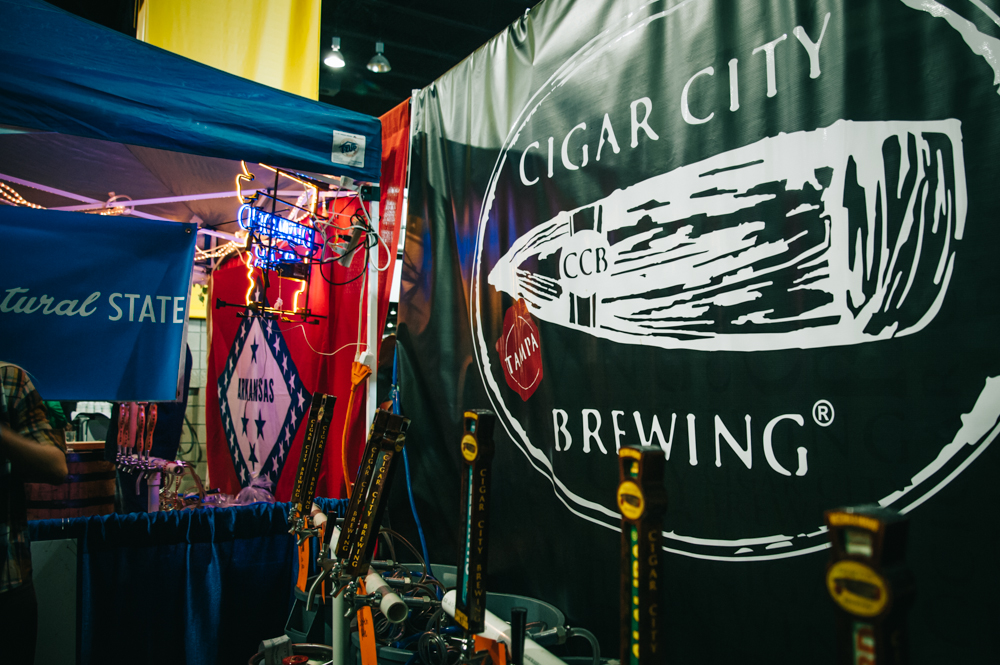 Jai Alai is already a well-sought-after and expertly-made IPA, so it lends itself well to variations. White Oak Jai Alai is barrel-aged on white oak, which enhances the established flavors. Oak tannin adds an extra hint of pine and the barrel-aging mellows and dries out the mouthfeel for a smooth yet nicely bitter IPA.

I have honestly never had a good coffee IPA. In a masochistic sort of way I still try to sample them, probably just so I can reiterate, “coffee IPAs are terrible.” Almost begrudgingly, I cannot say this about Stone’s Mocha IPA. In most versions I’ve had the astringency from the coffee only compounds the hop bitterness, and a fruity hop flavor clashes with earthy, roast flavors from the coffee. Mocha, however, utilizes all of the right components. This is not an overly bitter beer, but what bitterness exists is derived from the hops and the chocolate, with no astringency to speak of. The hops lend an earthy and slightly herbal flavor, again a perfect accompaniment for the roasted coffee. The bitterness is up front with a satiny chocolate finish, whereas in other versions it’s the opposite. How this was achieved is beyond comprehension, but it made me eat my words and also go for another pour.

A harsh bitterness combined with puckering sourness is a recipe for disaster. Two flavors our bodies are naturally inclined to reject do not negate each other to make a drinkable beer. That being said, when a brewer is able to cull the right flavors from a mixed-fermentation and the non-bitter flavors from hops, something beautiful emerges. 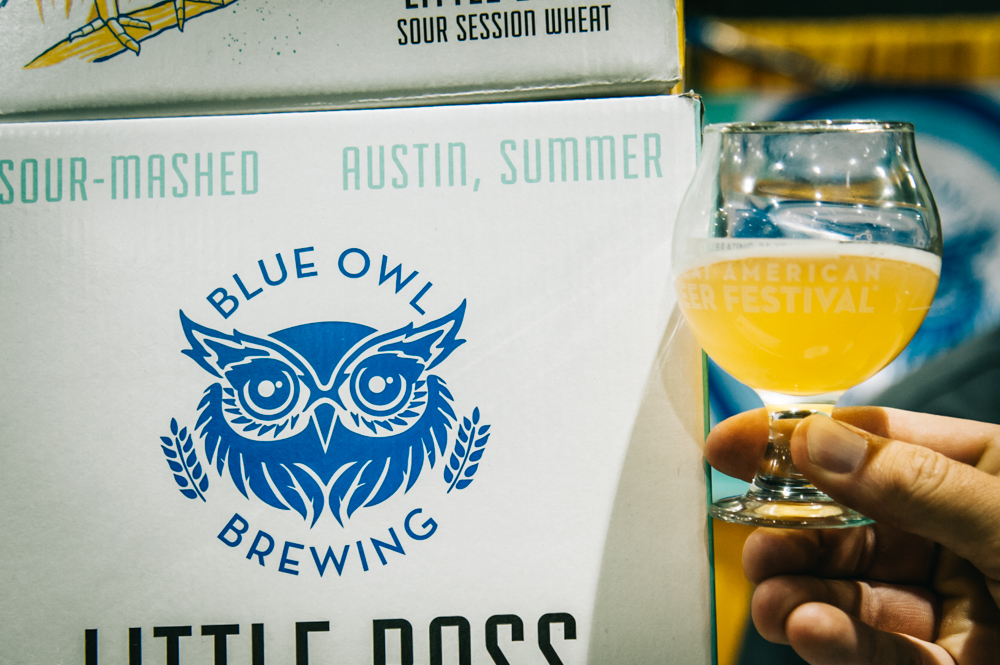 It was a foregone conclusion that at some point the most popular craft beer style of IPA would meet the trendiest in mixed-fermentation beers. Blue Owl specializes in sour-mashing their beers (a hybrid souring method that combines a souring of the beer wort and finishing with a clean yeast strain post-boil), making dry-hopping a great way to enhance some of the fruit notes in these beers. Like the addition of fruit and spices to compliment hoppy beer flavors, the sourness adds a tart bitterness to a beer with grapefruit-like hop flavors.

With little to no bitterness, Destihl manages to combine fruit and floral flavors and aromas from the sour beer culture and hops. The beer has a medium amount of acidity and balances towards citric tartness over sour funk. The hops add tropical fruit rather than bitterness, and the beer finishes crisp.

Wile many breweries had sour beers that were probably not yet ready from a quality standpoint in past years, just as many had tamer versions in the form of Goses. For a brewery without a devoted mixed-fermentation program these styles can be produced relatively quickly and can therefore be more dialed-in from batch to batch. 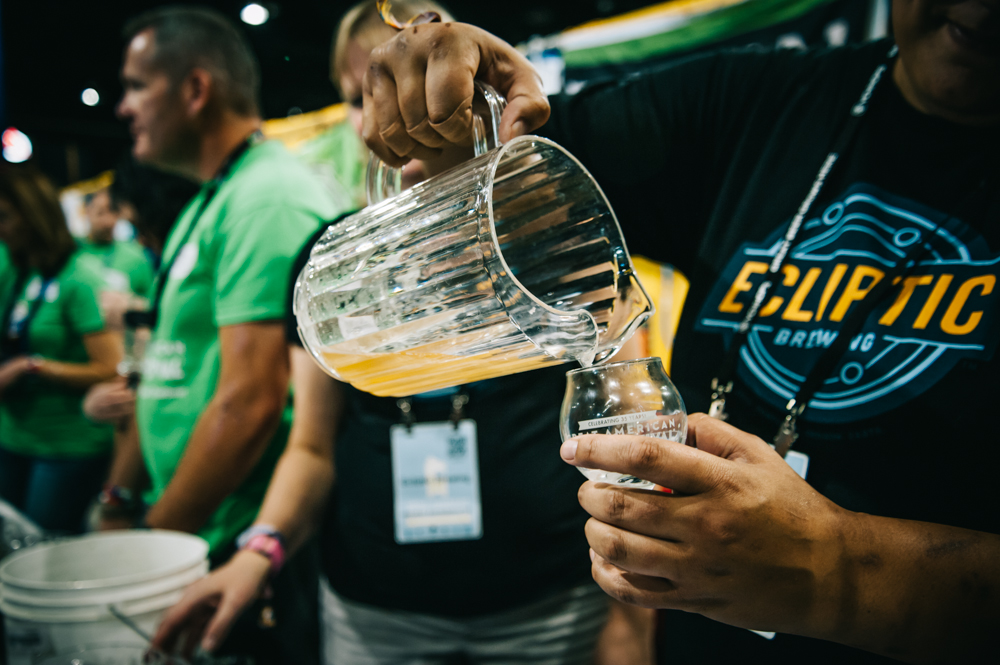 A great Gose should have all of the classic components: some salinity, sour tartness, coriander and a refreshing quality. Zenith achieves all three and was a nice palate cleanser during the festival. The grapefruit complimented the tartness, but without any bitterness. 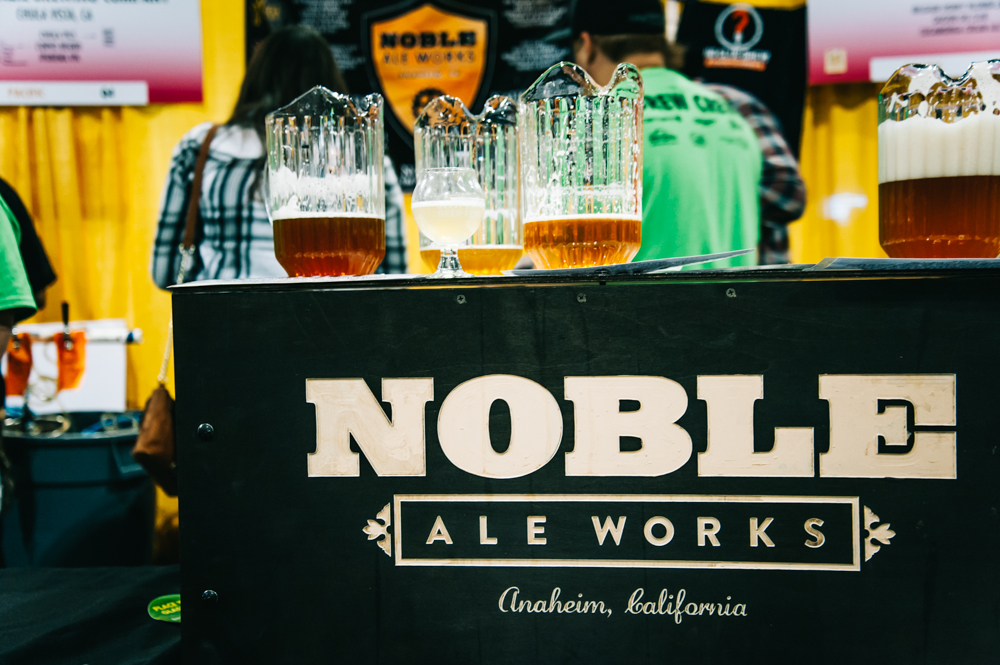 A bit smoother than other versions and without the bright orange coriander character, Gosebusters is made with Magnolia Oolong tea. The tea gives it a more herbal character, is light on the palate and adds a subtle fruit character.

Definitely not a classic example of a Gose, but no less delicious, is Victory’s Kirsch Gose. Sour cherries compliment the tartness of this style. Cherries can be tricky and sometimes result in a cough syrup-like thickness, but a fresh fruit flavor is highlighted in this beer. A surprising thirst-quencher, it has a nice wisp of sea salt for a snappy finish.

Every year Dogfish manages to bring a host of brews that range from the highly hoppy to the flat-out strange. One of the more balanced of the fruit-flavored Goses, Seaquenchale uses lime versus the oft-used orange citrus flavors. Lime flavor and a sour beer base give it a nice tartness, finished off with a hint of salt.

Although gimmicky food beers are less prevalent, some specialty offerings stood out, but more for their balance than their audaciousness. Breweries will always look for weird ingredients and be inspired by the food and cocktail world, but look for them to be more judicious in how they utilize unique and unusual elements. 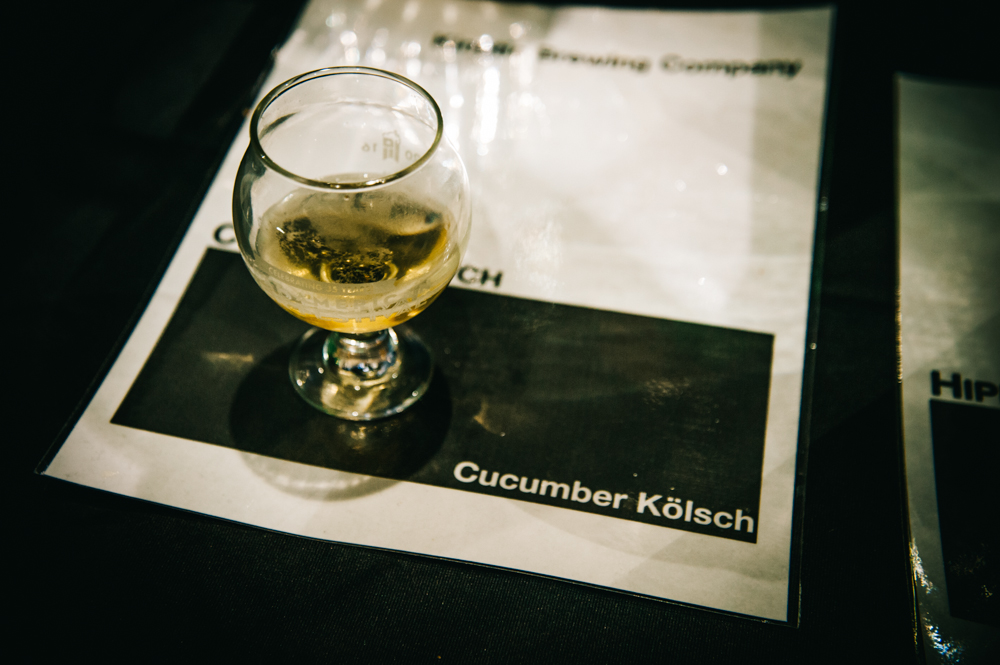 From the field beer category, this brew adds cucumber to the crisp German Kolsch beer style. Cucumbers were also in heavy rotation last year, and have been best utilized in lighter, refreshing ales. This is a beer I wish I would’ve had two months ago in the middle of summer. Refreshing, crisp and a with a soda-like spritziness, this is the perfect porch-sipper. Also of note is the Asheville, NC brewery Wicked Weed’s Coolcumber. Coolcumber has more herbal notes with the addition of juniper and basil and slightly bigger body.

Cocktail-inspired beers usually leave a lot to be desired, but leave it to the genius mind of brewmaster Garrett Oliver to deliver in droves on this beer. The beer is hefty, but not cloying, like a well-made old fashioned, with every component you look for in the classic cocktail. Barrel-aging in whiskey barrels gives the beer a noticeable whiskey bite, but without the overly oakiness of some barrel-aged beers. The rye malt offers a hint of spice and it finishes with the flavor of warm orange rind. At 12.8 percent alcohol this would be a suitable substitute for any evening tipple.

I’ve had marshmallow beers in the past, but this is the first where the actual essence of marshmallow truly comes through. I couldn’t stop smelling this beer, like hovering over a freshly opened bag of the wholly unnatural but no-less-delicious marshmallow. Vanilla and burnt sugar are throughout, but it is not overly sweet and has a bitter chocolate balance. 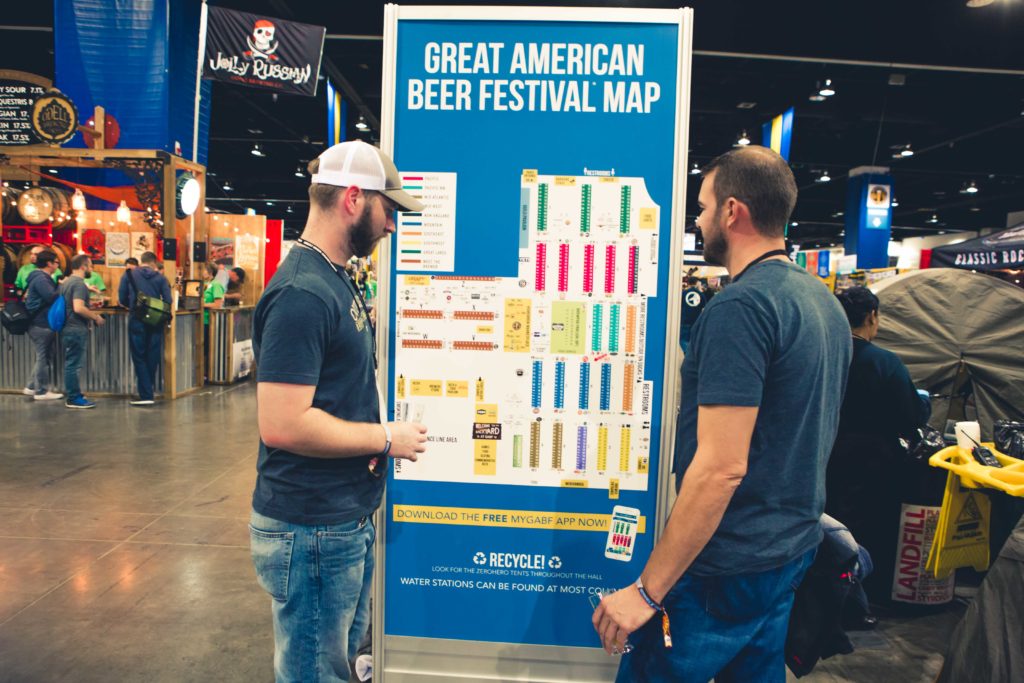 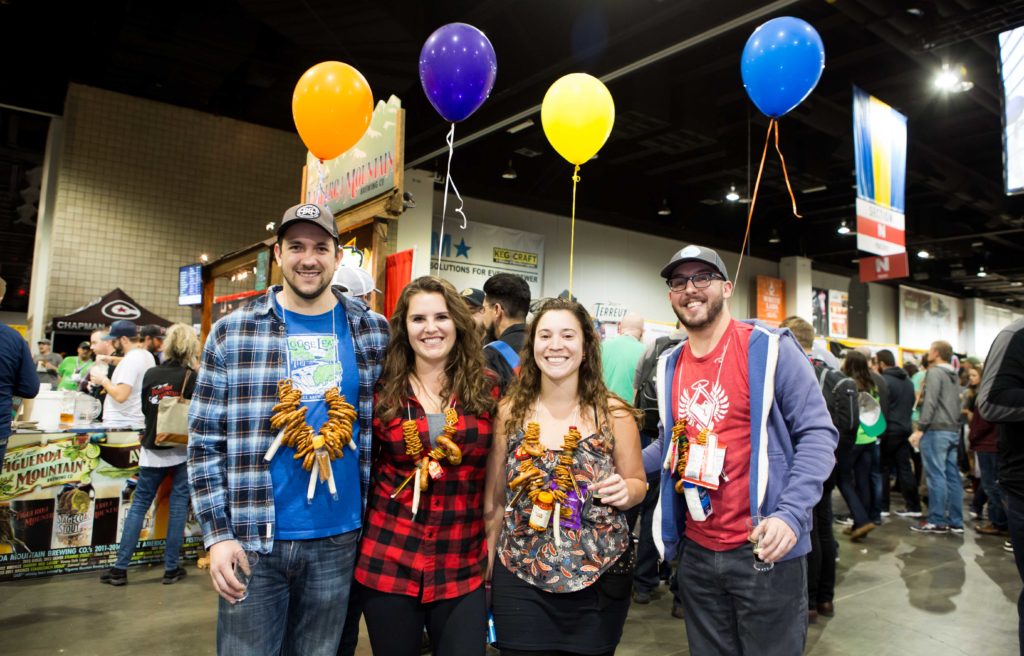 These beer fest-goers made finding each other that much easier. Photo by Kyle Cooper 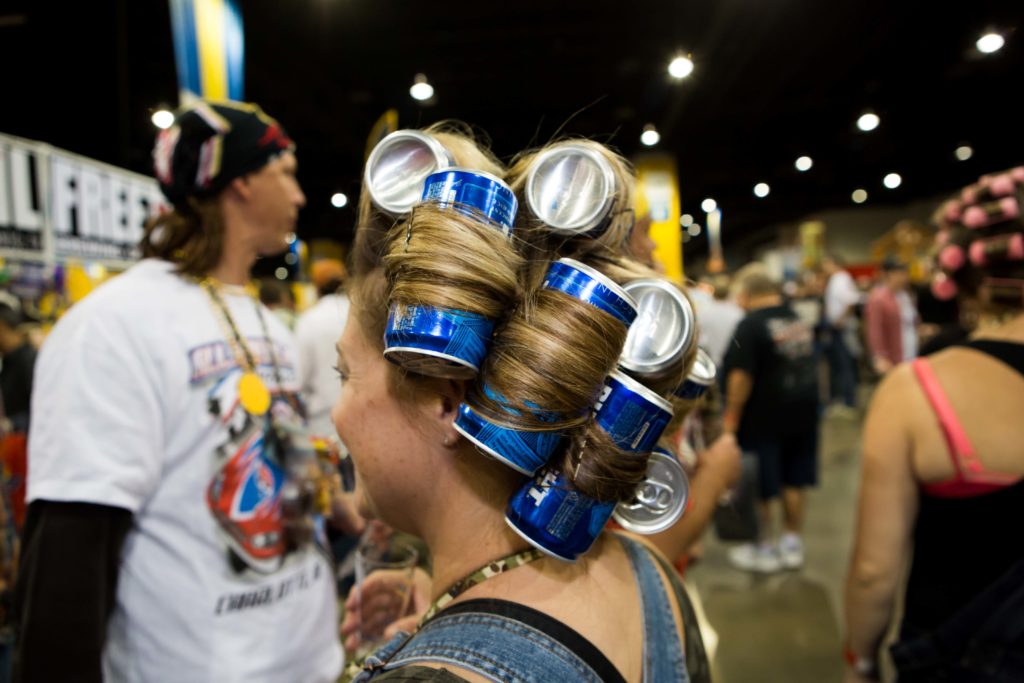 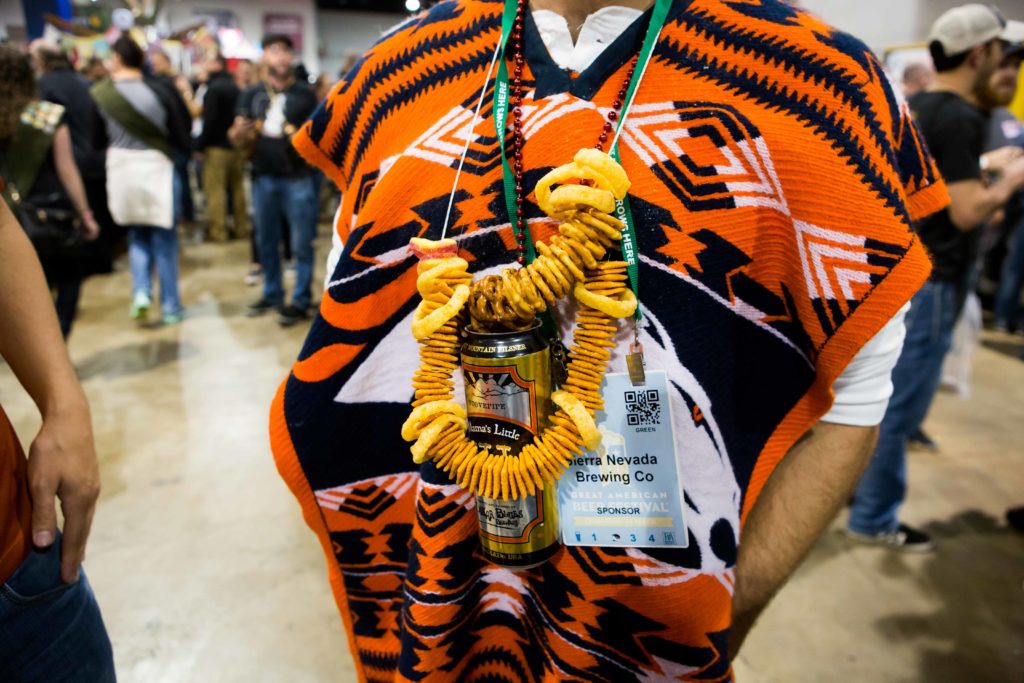 Broncos poncho, pretzels, Funions, Cheez-its and beer, what more could you want? Photo by Kyle Cooper 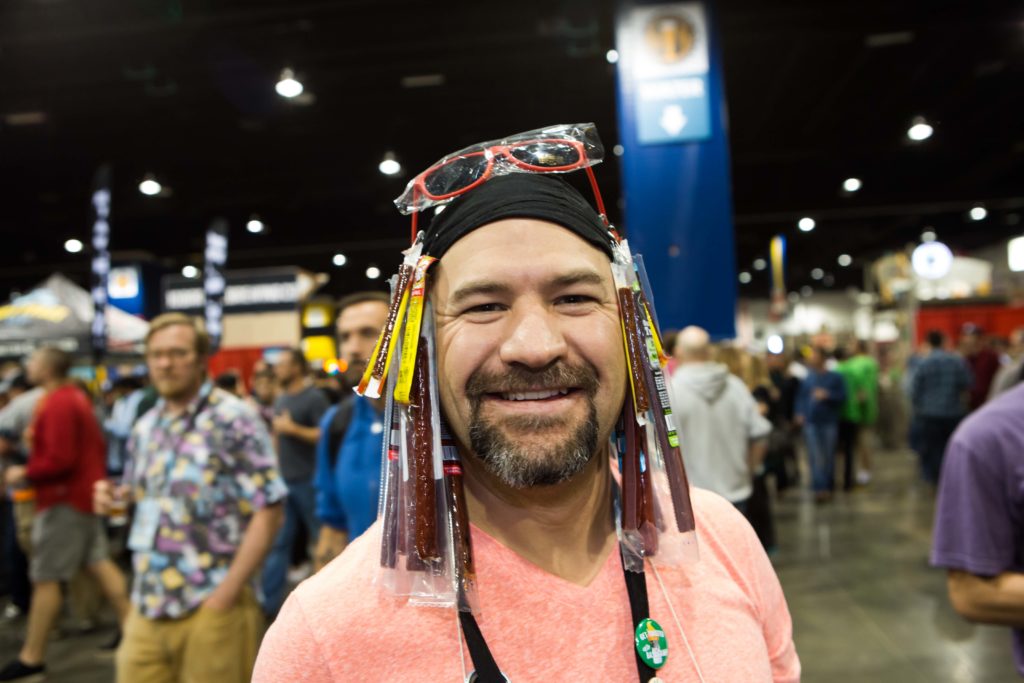