What happens at GABF definitely does not stay at GABF. This is the place for breweries to get maximum exposure to knowledgeable beer drinkers and also learn what trends are shaping the future of the beer world. The experimental beers that emerge this year may become competition categories in the future. With a nationwide audience at their fingertips, new breweries can expand their brand with just one crowd-pleasing creation or gold medal.

Who Is Making an Impact

The lines for Russian River and Dogfish Head still draw envy from their neighboring booths, but several new breweries are gaining their own audience. One of largest lines throughout the festival led to Oakland Park, Florida’s Funky Buddha Brewery. No consensus could be had among those in line on one particular beer, but the two favorites were Morning Wood, an imperial maple bacon coffee porter that’s aged in bourbon barrels, and Last Snow, a coconut coffee porter. Morning Wood is decadence in a glass, extremely rich in flavor, from smoke, maple sweetness and bourbon. The flavors meld together well though, making that one ounce pour seem like the last drop deliciousness from a well-savored snifter of bourbon. 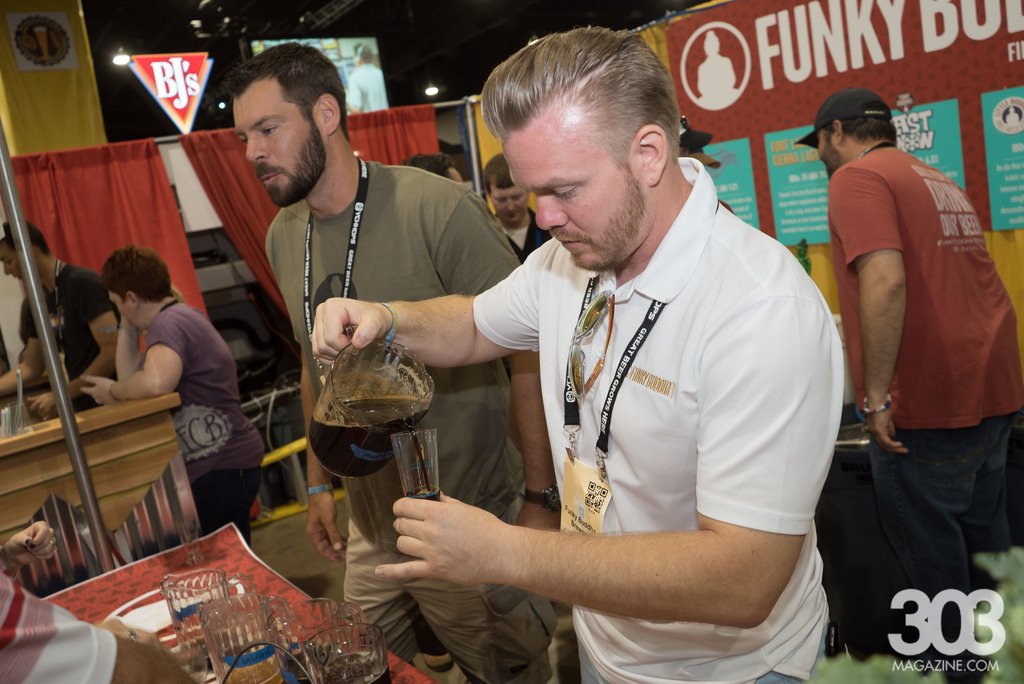 With no offense intended, Last Snow smells like a freshly opened bottle of coconut scented sun tan oil… but it works. Being a Florida-based brewery, Last Snow’s namesake is as tongue-in-cheek as its aroma. The coconut flavor is much less evident than its aroma, and provides a silky texture that balances with the hint of coffee flavor, like a coconut-flavored mocha enjoyed on a beach patio.

The latest beer-mecca of North Carolina is attracting big-name brands such as Sierra Nevada and Oskar Blues to set up production facilities, but the smaller breweries in Asheville are the driving force behind some of the best and most creative beers in the state. Wicked Weed Brewing stands tall among the fourteen breweries with base camps in Asheville. With three locations, Wicked Weed was able to corral three booths at the festival and showcase 15 beers, ranging from their GABF medal-winning Pernicious IPA (second-place, American-Style India Pale Ale), to the ever-popular wild yeast and experimental ales such as the cocktail-inspired Coolcumber and Black Angel cherry sour). 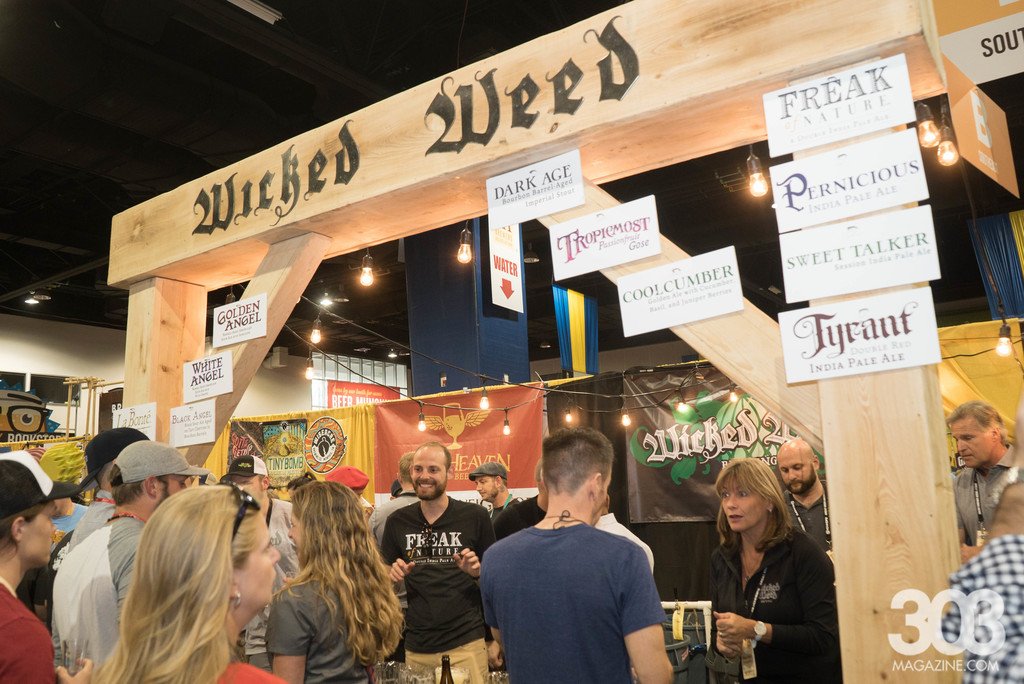 The ever-increasing lines for Wicked Weed.

Spice is the Variety of Life (and Beer)

With thousands of beers and a limited of space, breweries will often bring one-offs to attract a wider audience, but spiced beers are quickly becoming more of the norm. No longer is a cinnamon, nutmeg, allspice pumpkin beer sufficient enough for a spiced beer, but rather breweries are taking inspiration from the culinary world to expand what they are incorporating into the kettle.

Forbidden Root of Chicago, Illinois focuses exclusively on ‘botanic beers’ including Sublime Ginger, a wheat ale made with ginger, key lime, honey bush and lemon myrtle. Tennessee Brew Works of Nashville, Tennessee served up one of several basil-infused beers. Basil Ryeman is a spicy rye saison with just enough basil to add an earthy, herbal component to a very refreshing and drinkable beer.

Perhaps the most spice and herb forward of beers this year was Short’s Brewing Company’s Bloody Beer, a brew that tasted every bit like a Bloody Mary cocktail. The Roma tomato flavor is abundantly evident, as is the dill and horseradish.

Deriving inspiration from an 18th Century pirate battle, Saucony Creek Brewing Co.’s Maple Mistress combines just about every popular fall ingredient to create a velvety sweet and warming ale. Maple flavor is difficult to reproduce in a beer, as the sugars are quickly gobbled up by greedy yeast, and the volatile aspects usually ferment out. However, there is no mistaking its presence in this ale, perhaps with a little help from the rum spice blend and butternut squash additions.

Swindler’s Spice from Alosta Brewing Company of Covina, California is a vanilla chai brown porter, with the spices coming through more in the aroma, and chocolate and roast in the flavor. The base beer overwhelms the chai spices a bit, but is not so heavy to completely drown them out. 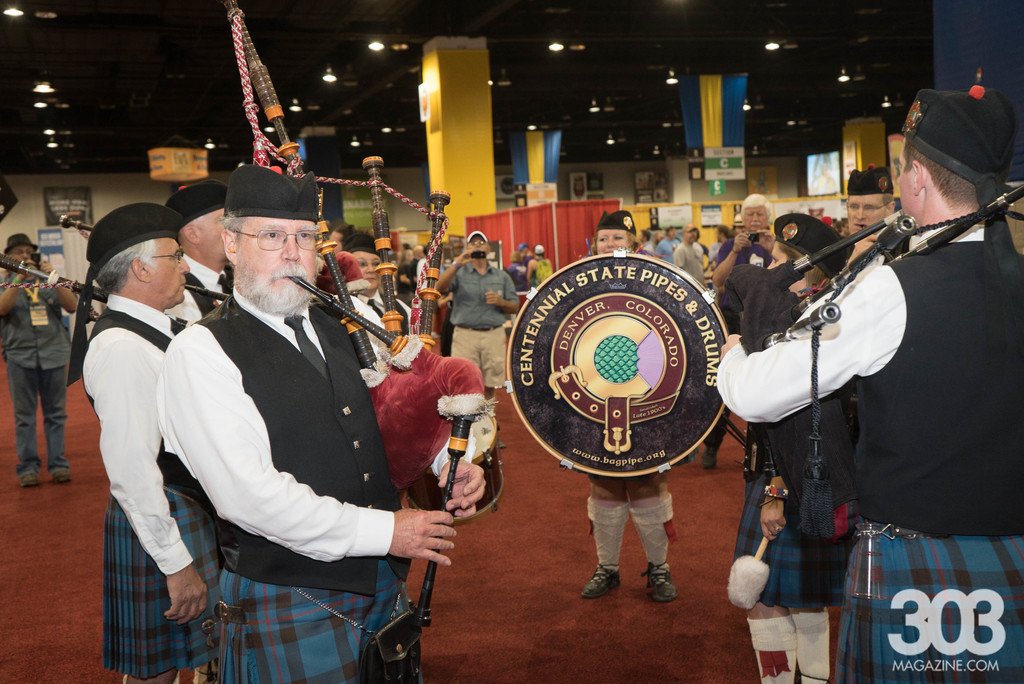 The winners in the category of ‘Herb and Spice Beer’ included another basil and cucumber combination from Free State Brewing Company’s Garden Party, a floral concoction of chamomile and rose hips from Panther Island Brewing’s Allergeez, and Oatmeal Raisin Cookie Ale from Aftershock Brewing Co.

Sour is the New Black

If it hasn’t been abundantly evident that you have to have a sour on tap to stay relevant, you haven’t been paying attention. This difference this year though, is that not only are sours growing exponentially, but the quality is quickly improving. Calling a beer “sour” is also selling it short on its potential variety of characteristics, which will hopefully improve as beer education on these styles expands.

Uncle Billy’s Brewery of Austin, Texas showcases this with Shutzenfest Lichtenhainer. A Lichtenhainer combines the lemony tartness of a berliner-weisse, with a hint of smoked wheat malt. Not many breweries have been able to recreate this style with much success, but the smoke in this beer is reminiscent of tangy fruit wood, which pairs well with the light tang of the sourness in this very well-crafted ale.

Outside of the occasional Belgian or lightly tart gose-style beer, not too many canned sours exist. Destihl Brewery is trying to change that, with an entire series of canned sours called Wild Sour, which includes several fruited berliner-weisses and traditional Flemish styles. GABF is a very beer-conscious crowd, so unlike other venues where canned beers and their advantages over glass bottles have to be explained, cans are actually a selling-point. This is no more evidenced than with their recent expansion into Colorado.

The Kentucky Common beer style is popping up in a few brewpubs around the country, which is no surprise as it combines two of the beer world’s favorite niches: whiskey barrel-aging and sours. Odd Otter Brewing Company’s Kentucky River Otter pays homage to this nearly lost style. With neither the whiskey, barrel, or sour components taking center stage, this is an extremely well-balanced beer for both those new to the style and connoisseurs of historical brews.

With additions of bacon (at more than just a handful of breweries), rare fruits, and the resurrection of not only nearly-extinct beers, but brewing processes, there are too many beer trends to record in such a short amount of time. Thus is the double-edged sword of GABF; a cornucopia of fantastic creations that makes you want to try as much as possible, but with just enough time to lure you into thinking you can catch it next year.