My First Time at a Cannabis Dinner

“This day in rock ‘n roll history, all six members of The Grateful Dead were busted by California narcotics agents for possession of marijuana at the group’s 710 Ashbury Street House in San Francisco, California,” read Kendal Norris, founder of Mason Jar Events, her iPhone doubling as a flashlight in the pure-black evening.

“My, how times have changed,” Norris exclaimed to a round of applause. “Thankfully it’s not 1967.”

And here we were, more than 150 people, gathered on the banks of the North Saint Vrain Creek at Planet Bluegrass in Lyons, Colorado, on October 2, 2016, openly enjoying cannabis, wine and the culinary talents of Hosea Rosenberg’s Blackbelly Catering—exactly 49 years after this aforementioned cultural nugget. Perhaps it was the ambience created by the flickering candlelight, or a certain something in the air, but something came full circle as Norris continued to proselytize the positive potentials of cannabis. Something just felt right.

As a casual cannabis consumer, I’ll admit I had my initial hesitations about attending a cannabis dinner. While I’ve admittedly been able to adapt my high to my liking since legalization, I still tend to get lost in my own head and contemplate the nuances of literally everything when I get stoned. However, as I boarded the bus parked at the Decatur-Federal light rail station — the meeting spot for our shuttle to Lyons — any apprehension I had immediately turned into amusement. Yes, we were able to pass around a joint. And another. And another. Trust me, it was smiles all around as our de facto DJ played “Express Yourself” by Charles Wright & the Watts 103rd Street Rhythm Band on Spotify. 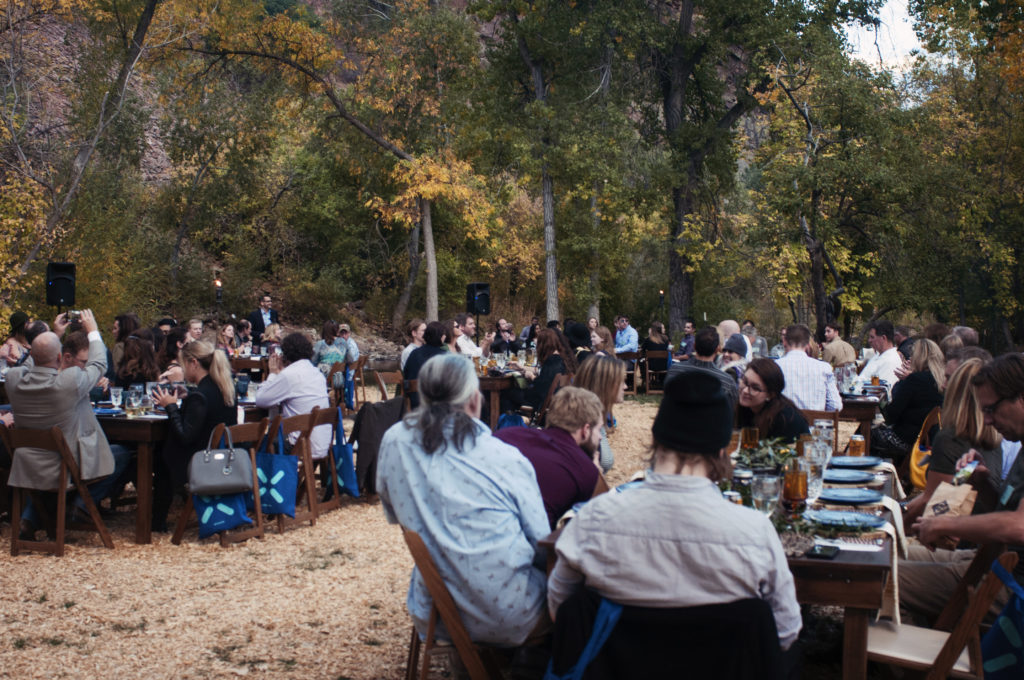 Since its foundation in May 2015, Mason Jar has developed quite the following. As I found out during this hazy shuttle, I was among the few first-timers. Sitting between a cannabis-industry marketing professional, a Boulder-based graphic designer and two retirees — incidentally, this hodgepodge of individuals would set the scene for the night — I was told that any expectations I had were to be surpassed.

“It’s like a wedding for strangers,” one of them said. Helmed by Norris and an ambitious group of excellent event coordinators, Mason Jar hosts seasonal, multi-course dinners that effectively aim to strip away any stigmas that still plague the industry. Take your average, upscale, farm-to-table event, and add a bit of cultural cross-breeding— marijuana pairings, liberal yet responsible on-site consumption and a general congenial atmosphere — and you’ve got yourself a Mason Jar event. 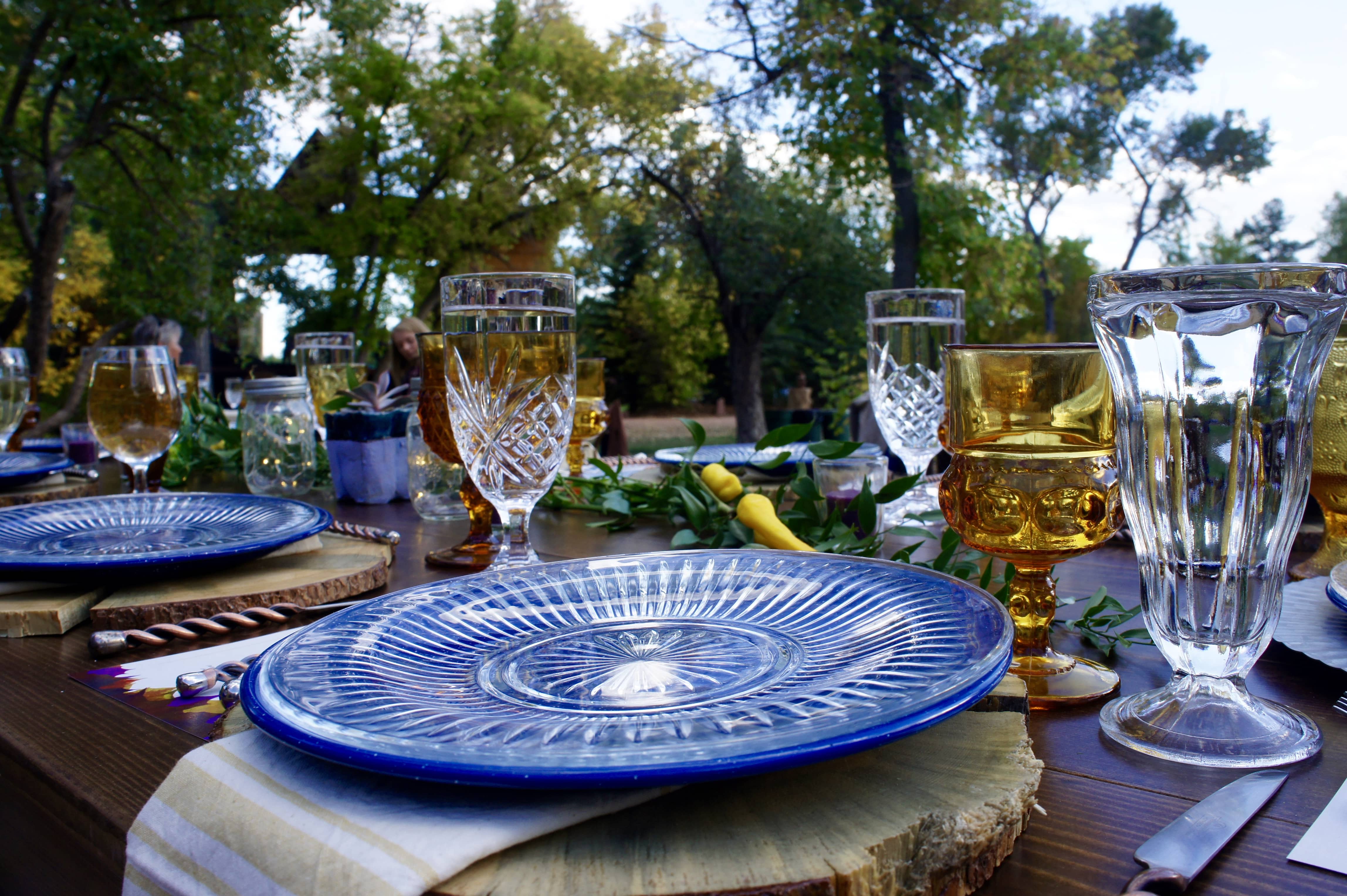 Our first pit stop was at Headquarters Cannabis Company in Longmont to pick up our “goodie bags.” Because of Colorado’s ban on public consumption, Mason Jar requires guests to buy pairings offsite at a licensed facility, and to further comply with state and local laws, none of the food is cannabis-infused. In addition to our pairings — two strains of bud and a 10 mg serving of BlueKudu’s Alpine Glacier mint-flavored chocolate edible — the bag contained designer-quality paraphernalia and products from companies like Mary Jane’s Medicinals, purveyors of Lip Bong lip balm and Heavenly Hash Bath, a bath product whose side effects include “tingling, mild euphoria, and a renewed sense that world peace is possible.”

As we pulled into Planet Bluegrass, the 20-acre outdoor venue that plays host to a summer bluegrass festival and weddings, the fall colors were in full swing. Flanked on its eastern border by a smattering of burnt yellow aspens and a faded, granite rock face, the sun-kissed knoll was idyllic, to say the least. Accented by a subtle yet perpetual plume of smoke, an overwhelming tranquility permeated our personal refuge, with the four-piece bluegrass band further solidifying the classic Coloradan atmosphere. Guests moseyed about for the cocktail hour, enjoying an organic roasted squash soup shooter, Sanitas Brewing Company’s canned beers, a Syrah, a white blend and a resin selection served in the PAX Era, a futuristic, single-serve contraption that has been described as the “Keurig of vaporizers.” As I caught up with friends and acquaintances, I met, among other people, a CEO of one of the state’s more established edible brands, who shared insider stories of the cannabis industry and his ambitious visions for the future. In an industry this green — if I may say so myself — who wouldn’t get excited? 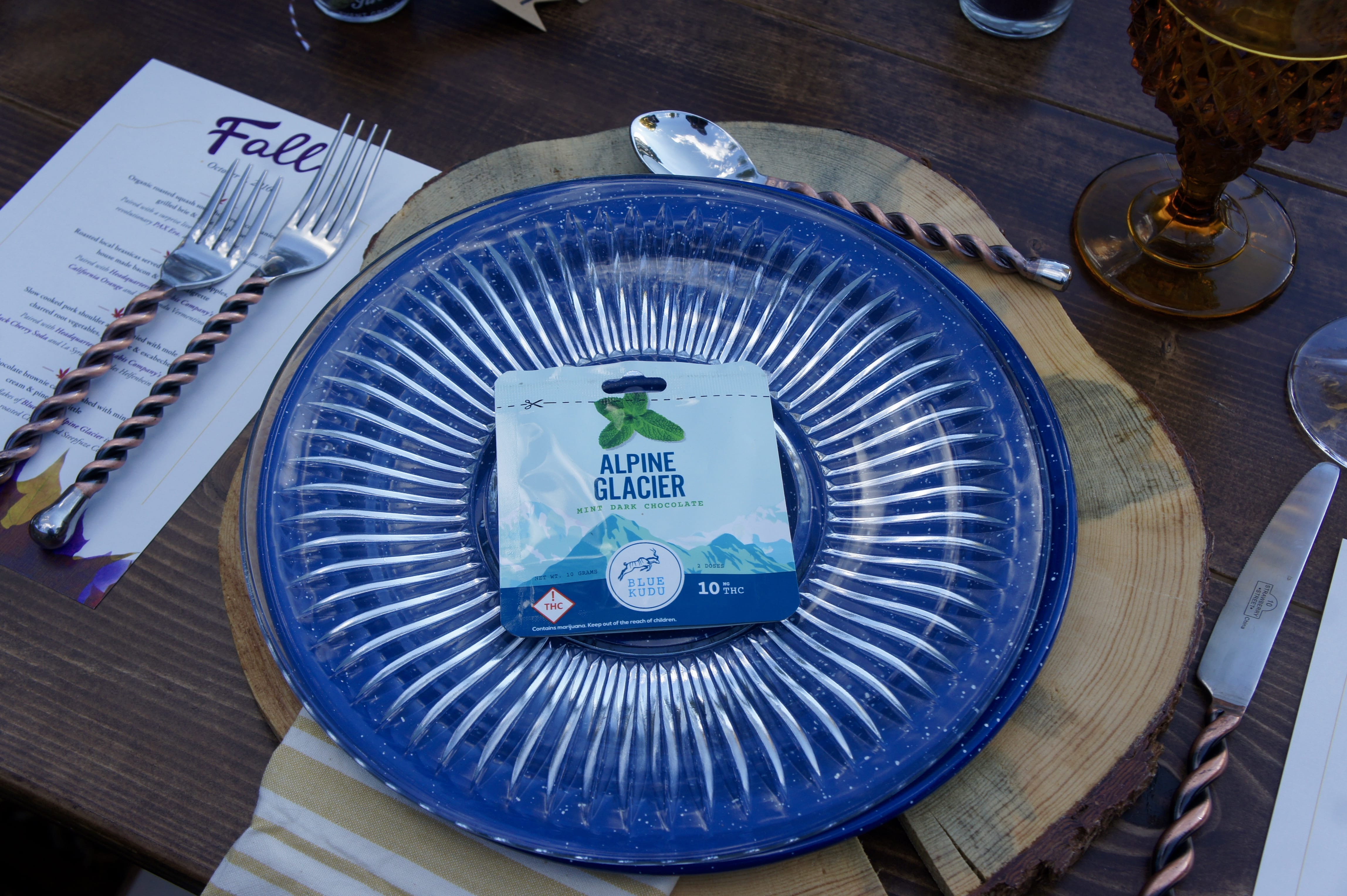 By the time we sat down to dine — and things really started to kick in — I remembered what my neighbor on the bus ride had said a few hours ago. I felt less at a dinner party than at a consummate, communal gathering. The first dish of the night paired a citrusy strain of California Orange — courtesy of my generous new friend on the other side of the table who procured a joint at the perfect time — with a salad of local brassicas (broccoli, cauliflower, Brussels sprouts), apples, dates and apple vinaigrette. I’ll admit my taste buds are a bit unrefined when it comes to the nuances of strains, but if my neighbor’s giggly excitement was any indication, the pairing was perfect. 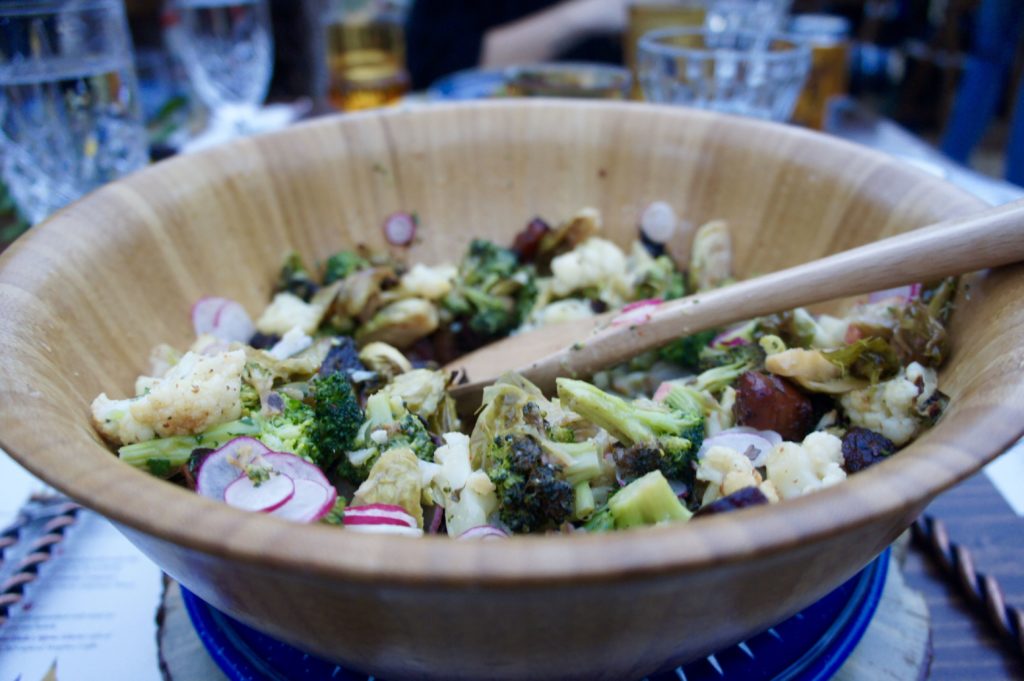 Things continued in this fashion — food, joint, food, joint — for the next hour or so. While I did lose track of time, what I do distinctly remember is the food. Who could forget Blackbelly’s slow-cooked pork shoulder swimming in a rich mole rojo accompanied by charred root vegetables? Or the appropriately decadent chocolate brownie cake, served with fresh mint ice cream and pine nut brittle? While I began to turn down my rotation in the smoke circle, I became increasingly impressed with not only my compatriot’s lung capacity, but their abilities to remain relatively unchanged by tetrahydrocannabinol. And unlike booze-fueled events of the same nature, conversation actually got more interesting as the night progressed. I’ll take a stoned stranger over an inebriated idiot any night of the week.

Up until the end of the night, the ebb-and-flow of the event felt entirely natural. And just like that, our shuttle arrived to whisk us back to Denver. We boarded the bus, and I instantly welcomed the plush leather seating. At some point towards the end of our ride, I serendipitously overheard a wide-eyed (figuratively, at least), well-dressed woman: “Anytime I go to these parties, I forget exactly what happens. But six hours go by and I wake up and realize I just had the best time ever.” As I drifted off, I felt both sedated and invigorated. I felt entirely confident in the future of this burgeoning industry, and yet I was more than ready to sleep like a child and go to work the following Monday morning.