A cascade of drum rolls with shimmering chimes ushered in the night of a Sufjan Stevens show at Red Rocks on Monday, July 18. The eclectic R&B group Rhye opened for them, getting people settled into the dreamy and lush mixture of strings and brass that was about to follow them into the night. 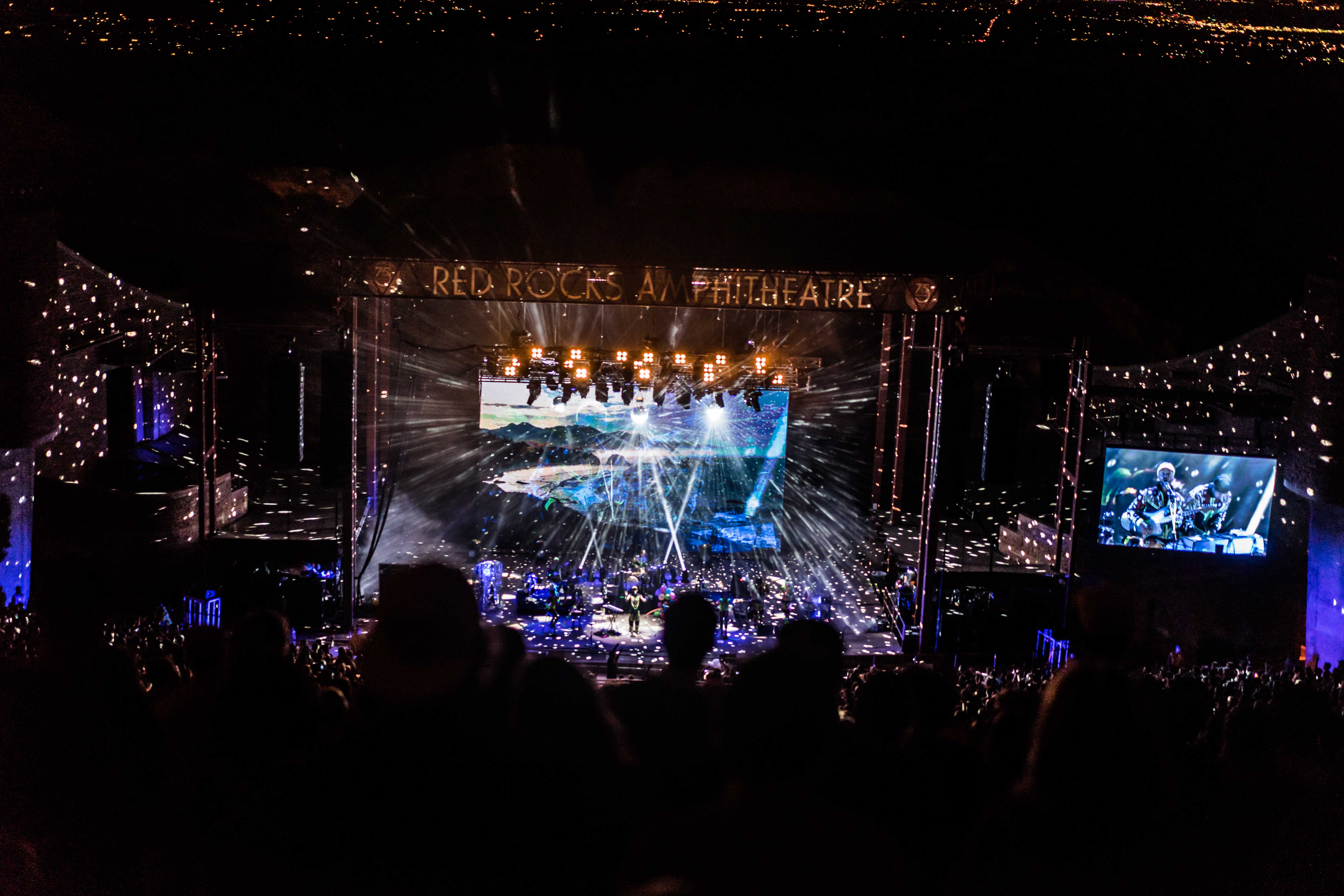 All photos courtesy of Meg O’Neil

Stevens bellowed into “Seven Swans,” and quickly let us know that tonight was not just going to be another sit-back-and-relax to some indie music type of night. Oh yes, we all love the Sufjan that makes us feel the edge of our grief, the climax of our emotive wanderings, but a night at the Rocks is not always conducive to outlaw emotions. “Seven Swans” was a grandiose version of it’s former guitar-laden, sheltered self. Stevens’ fragile yet full voice pressed lyrics into the microphone that were weighted with a spirituality. “I saw a sign in the sky / Seven swans, seven swans, seven swans / I heard a voice in my mind / I will try, I will try, I will try,” came the herald words. Wings attached to Stevens clashed upward as his two dancers exalted a palpable energy around him.

The cloudy night with its double rainbow over the amphitheater played out nicely into Stevens’ music. He stated, “Behind the ominous clouds, there was a chorus of angels, behind the chorus of angels, was a children’s’ chorus…behind them was the face of God…and I just transposed his music — right now,” the crowd laughed, knowing he was joking around, yet I still have a tinkling that Stevens thought the Colorado weather brought on whispering of religion. 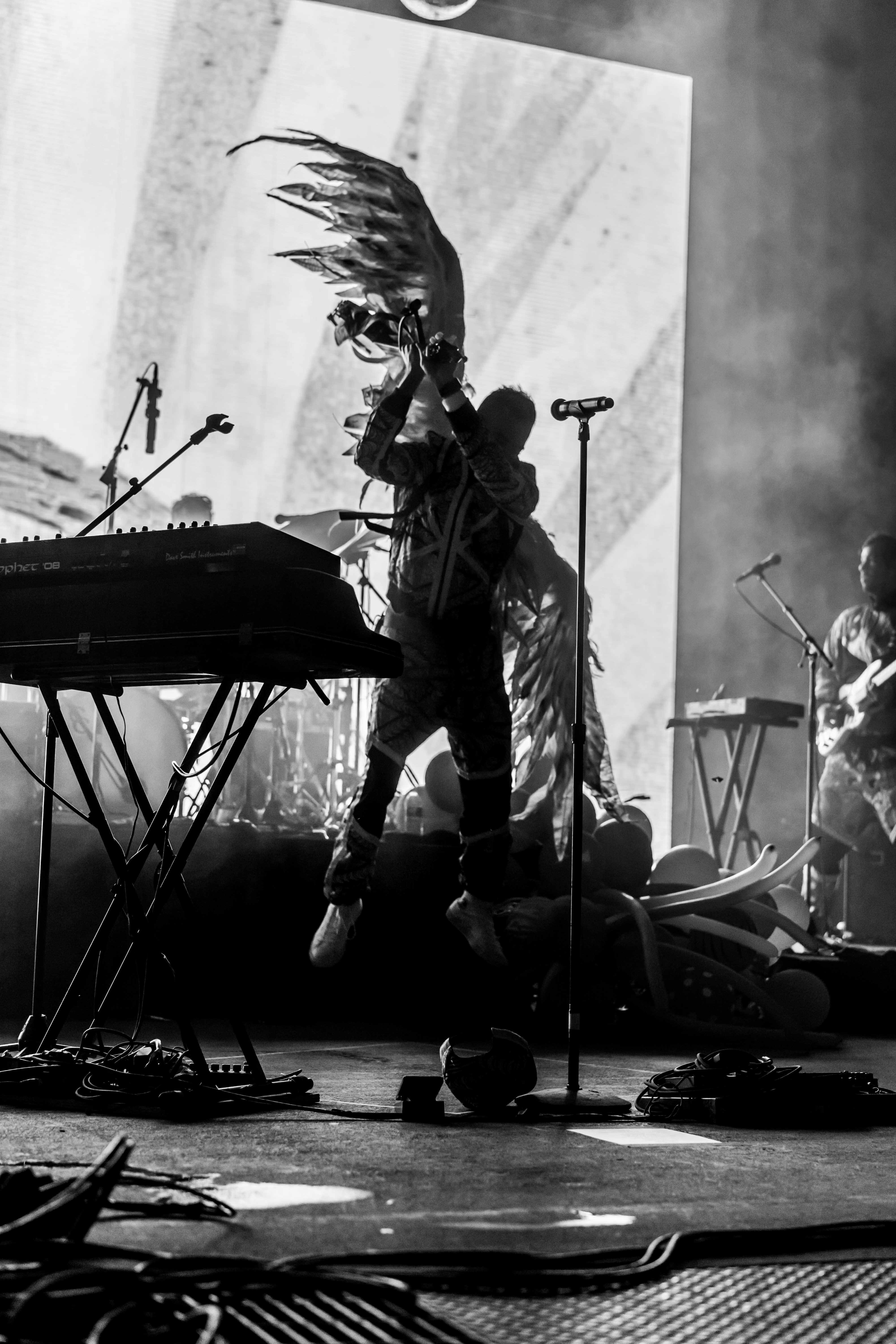 He introduced the next instrumental foray into his discography as “bad jazz” and the familiar trumpet blares and piano spell of (yes I’m putting the entire song title here) “Come On! Feel the Illinoise! (Part I: The World’s Colombian Exposition – Part II: Carl Sandburg Visits Me in a Dream)” spilled out from the musicians.

Even though that title took up an entire paragraph just now, the song drew roars from the crowd. Psychedelic dancing pulsed from the stage, and I kept thinking I was at an urban playground for hippies. Images of mermaids and superheroes splashed across the monitors, accompanied with streaming disco lights, of course. “Even with the rest belated, everything is antiquated / Are you writing from the heart, are you writing from the heart? / Even in his heart, the Devil has to know the water level,” rang out Stevens’ lyrics, reminding us we were indeed still situated in his music, no matter how much of a party was taking place on stage.

He played a range of songs from his vast musical history, such as acoustic and melancholic tinged anthems from Carrie and Lowell to animated songs from The Age of ADZ and the crowd released their positive energy both in spurts of dancing power and through nostalgic head nods. Soon, “Vesuvius” entered into the space, taking us on a whirlwind filled with fiery instruments and the constant variable of Stevens’ unique vocals.

In the age of technology, Stevens does a masterful job of combining the spiritual with the modern experimentation. I’m sure many of the members in the audience credit his lyrics to a honing of talents, but he is very much rooted in his beliefs, and it shines through with his words. “Sufjan, follow your heart / Follow the flame, or fall on the floor / Sufjan, the panic inside / The murdering ghost that you cannot ignore,” sang Stevens, a garble of gospel disappearing into the flames of his guitar strums and drum pounds. 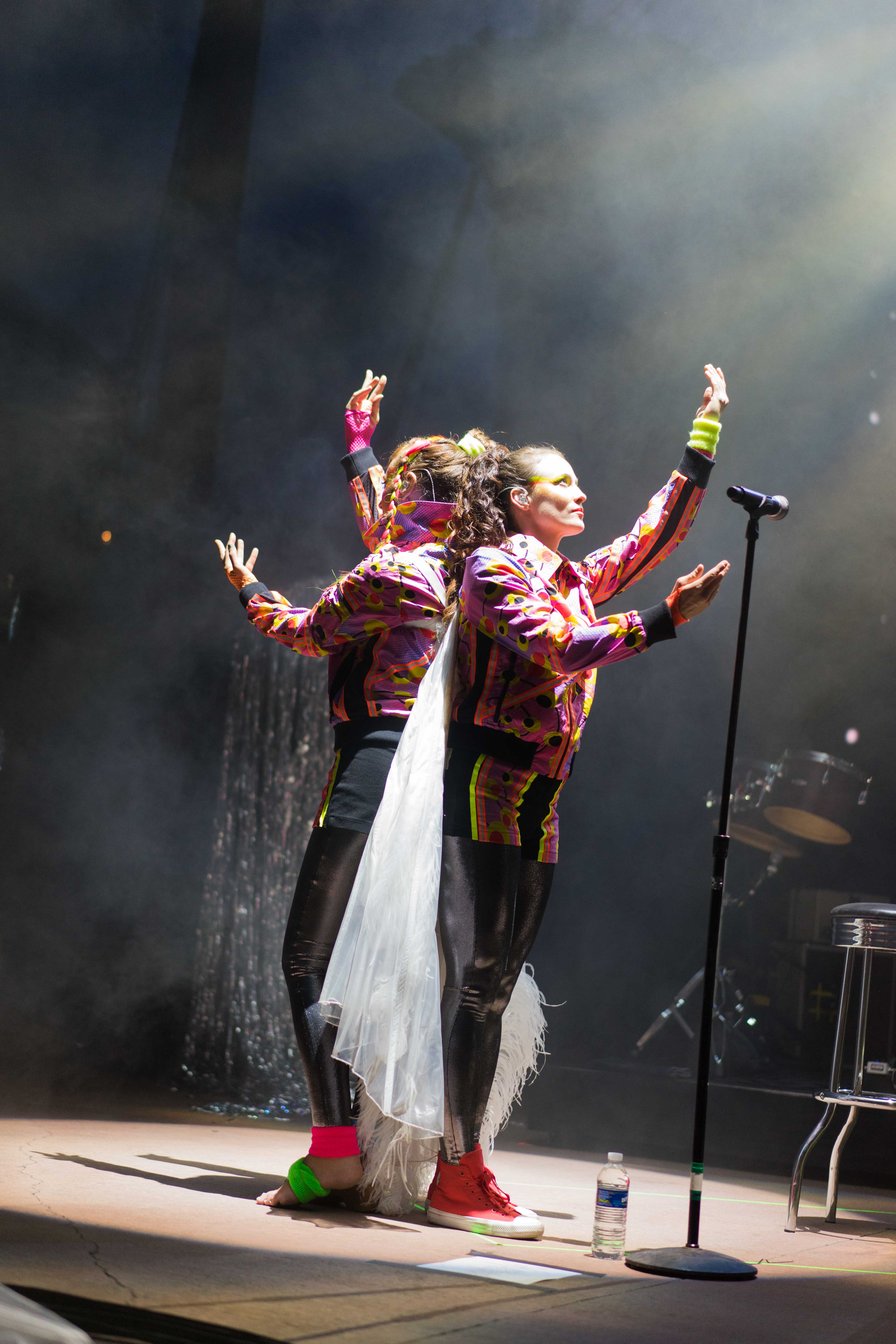 The crowd was then ushered into a lull of more bittersweet psalms. Songs such as “Blue Bucket of Gold,” “Fourth of July” and “Should Have Known Better,” flowed across the stage, with a calm ocean fluttering onto the screens.  The full moon finally emerged from the clouds and Stevens jokingly stated, “The worst part is over.” The party catapulted back into motion, with costume changes sparkling and guitar riffs jamming, and soon “Impossible Soul” took form. He rolled around stage with a rock n roll melt down and it transformed into a dance between disco and ballad.

Leaving quickly, he came back out dressed, from what I perceived, as a robot, in a shimmering tin foil suit that extended up and above his stature. Jumping down into the crowd, the song “Impossible Soul” stretched for as long as it could, and autotune came into play with the crowd laughing at the ridiculousness and chaos across stage.

Of course, the song “Chicago” came on, a signal that the end was drawing near, and a more subtle Sufjan emerged. “For The Widows In Paradise, For The Fatherless In Ypsilanti” closed out his set, but the audience couldn’t leave. For the encore, he stated it wouldn’t be a Sufjan Stevens show without closing it out in death, and the beautiful tides of “To Be Alone with You” and “Casimir Pulaski Day” waded out under the moonlight. A magical night, opened by a double rainbow and closed by the moon, Sufjan, we’ll be seeing you soon. 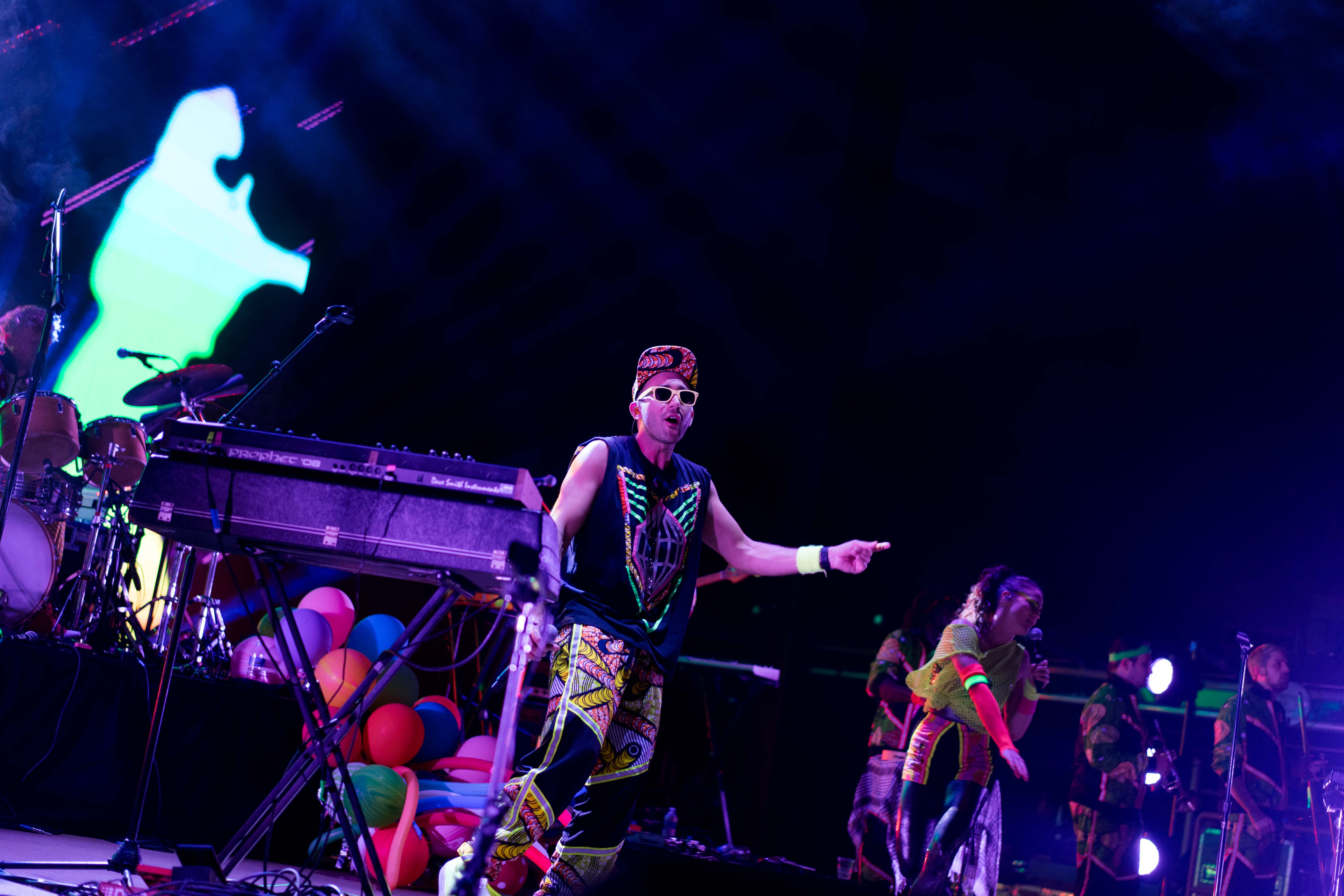