Review – Flight of the Conchords Soared with Hilarious New Songs

To most, Red Rocks is simply a haven to rock out into the early hours of the morning. However, the venue is so much more versatile than that — which was proven to be true to the thousands of people who showed up for the Flight of the Conchords concert on Tuesday night. 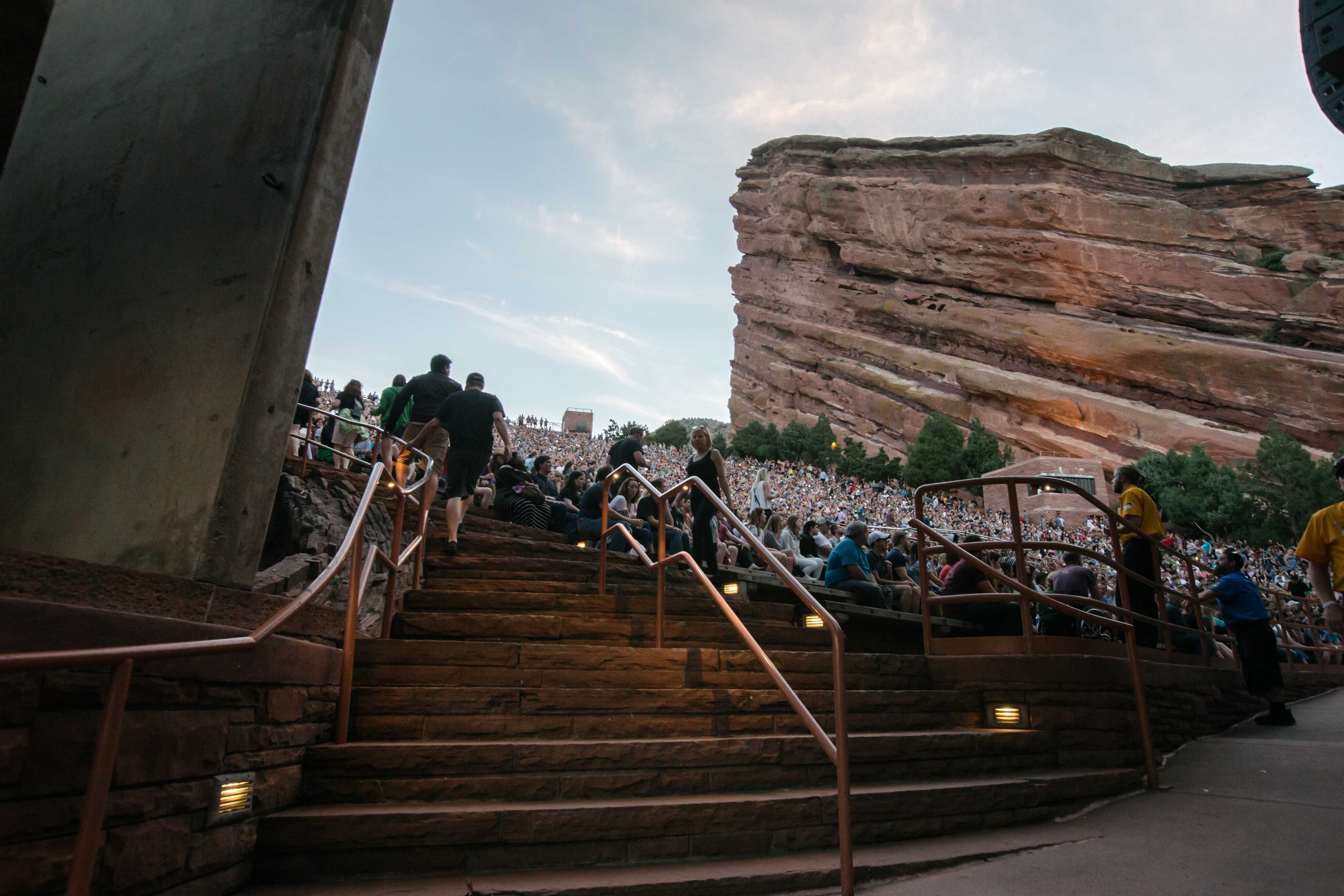 Hailing from New Zealand, the comedic yet obscenely talented musical duo took stage to Red Rocks once again, selling out the large venue to their cult-like fan base. The duo, who repeatedly referred to themselves as a one-man band despite obviously being a two-man band, had a simple on-stage set-up. Several guitars lined the back of them, a piano was displayed to the audiences’ right and a few miscellaneous percussion items situated in front. Along with their plethora of instruments, they also added a silent cellist, Nigel Collins, to assist in their new sound.

This being their first tour since 2014, the banter definitely had a nostalgic feel to it. The men went through old songs, new songs and telling the overly-aggressive audience to shut up, which went largely ignored. They opened up the show with “Chips and Dip,” which is, as you may have guessed, a party song about chips and dip. 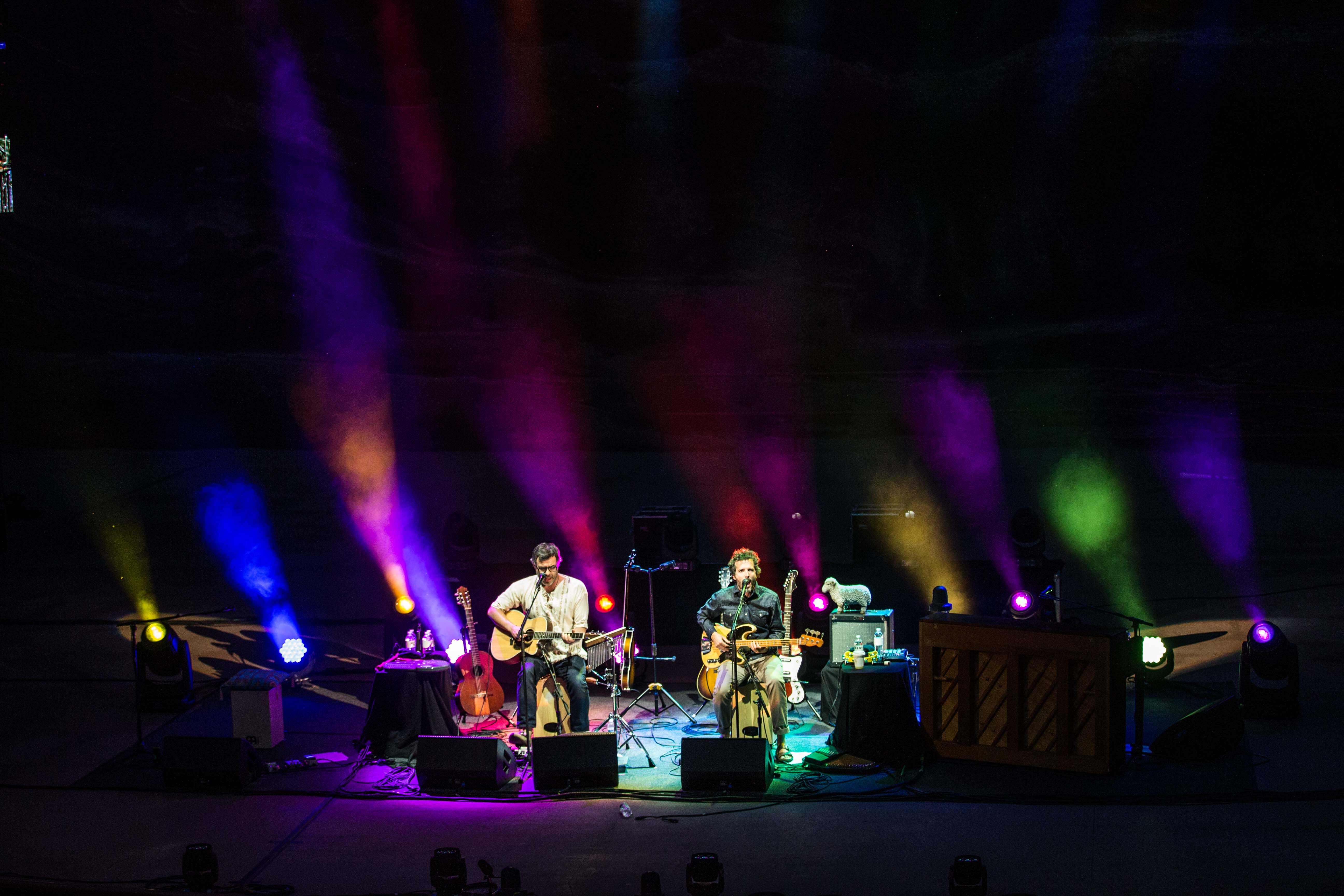 “Father and Son,” a new track about a divorced father asking his son a series of questions regarding his new step-dad “Trevor,” garnered a slew of laughs from the audience, who were clearly thrilled at the thought of these two new songs having the same exact kick and hilarity as the FOTC we all have known and loved. However, the tingle of new tunes can only last so long. With the next song, “Robots,” there were fans audibly singing along, as well as a group of patrons dressed in faux robot attire. “The Most Beautiful Girl in the Room,” another favorite, earned an uproarious greeting once it began and another when Jermaine switched the lyrics to, “you’re so beautiful — like Red Rocks!”

“The Ballad of Stana,” a lengthy number that tells the tale of an evil man who ends up meeting his doppelgänger-clone-twin and forms a romantic relationship with him, sparked some light hazing of a fan in the audience. “Stana” and French hit “Foux Du Fafa,” from their eponymous first full-length album, were the first tracks of the night to really showcase the vast depth of their musical ability, which is truly what makes FOTC stand out. 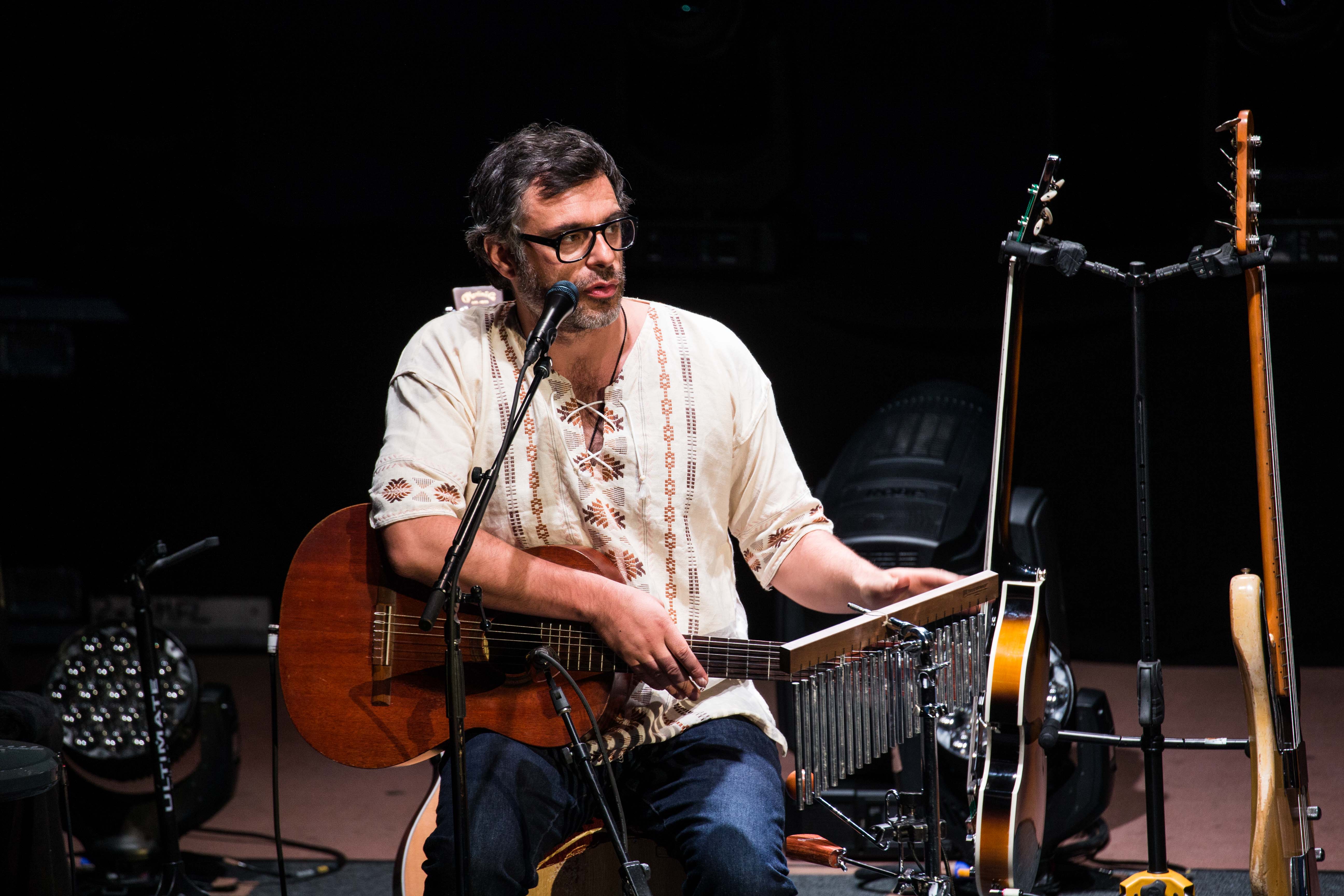 “Shady Rachel,” a jazz number, brought out a more visual aspect of the show — the lights turned down low and the large LED screens going to black and white. The camera whisked around the three gentlemen in artistic angles and they sang in raspy voices of a friend who steals spoons. “Pencils in the Wind,” originally not on the set list, was the only song the two decided to take by request. A feel good number about love being the strongest adhesive in the world took the vibe of the night into a mushy gushy place. “You know, when people love each other, that’s a kind of love tape,” said Jermaine.

The event really took off with the next number, a hefty rendition of “Mutha’uckas” reminded the crowd of how versatile these jokesters really are, all the while making fun of themselves. Halfway through the rap song, the track opened up into “Hurt Feelings” only to come back into the first song again. Then, the lights turned down and went red and we all knew what time is was. Even though it was Tuesday, there still wasn’t anything good on T.V. We knew what time it was, because it was “Business Time.” 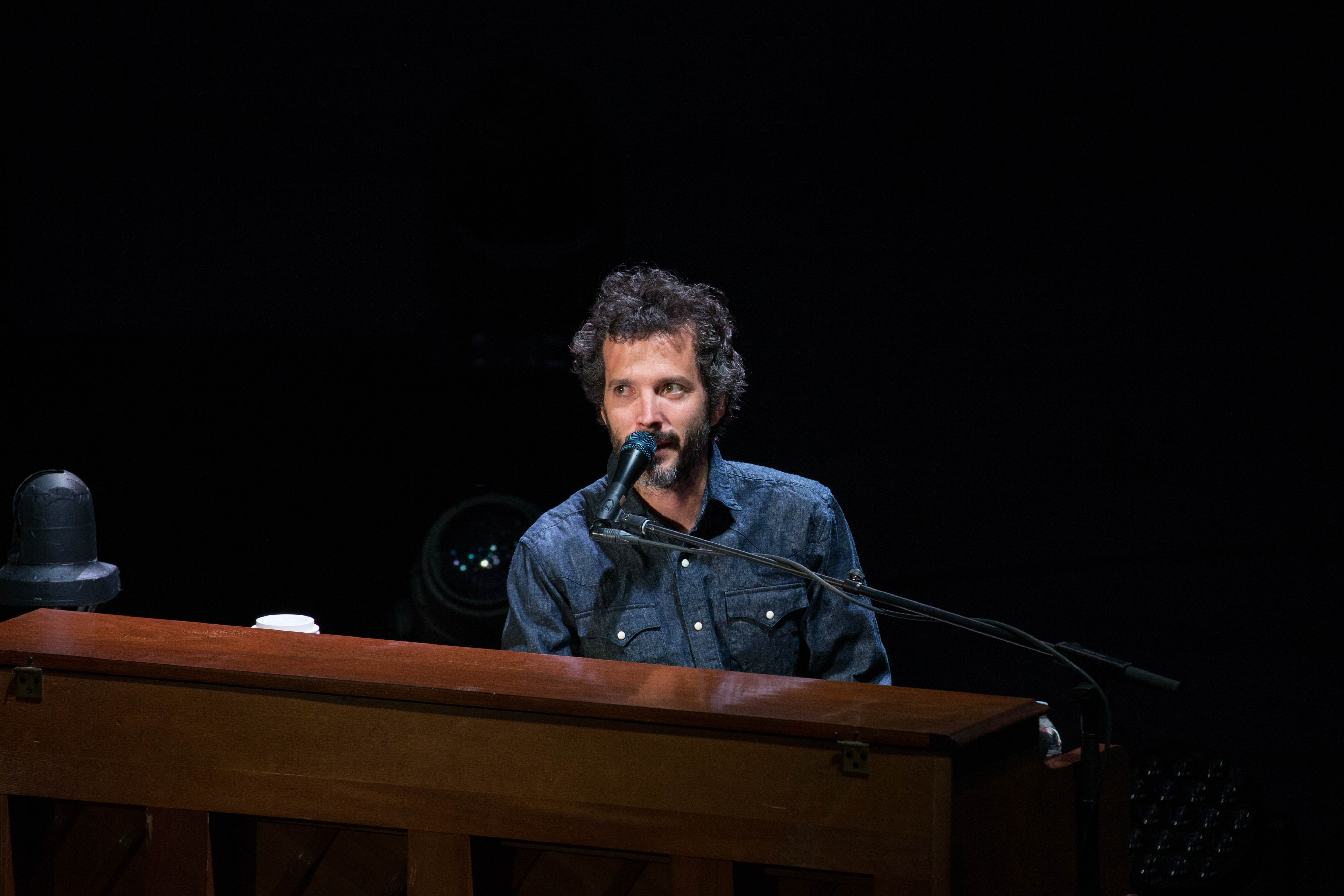 The new songs of the performance were all noteworthy; however, the best by far was “Seagulls,” which Bret named “The new Freebird, since that song was better than Freebird.” The lyrics were, as usual, witty, sexual, perplexing and boisterous.

“Bowie’s in Space” rounded out the set, which was a surprise to no one given the passing of the iconic singer earlier this year and the vast popularity of the song and episode, which was derived from their television show, also titled Flight of the Conchords. Prior to playing the tune, the band promised that they were done with their performance for the evening and had no intention of doing an encore, complete with obvious winks and an ever-sarcastic explanation. 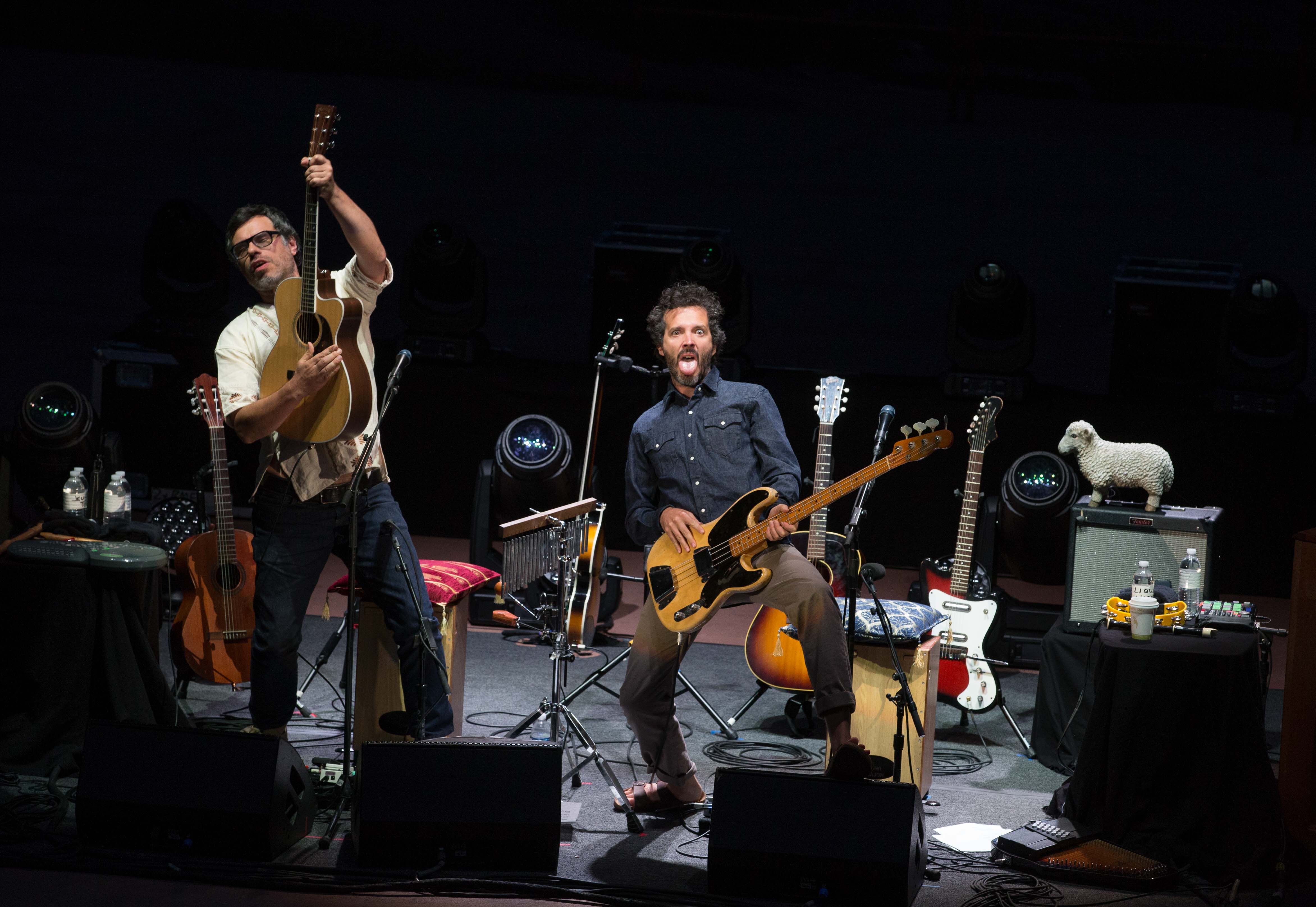 They fought off the police, the army and Sting in order to jump back on stage for a few more songs. “Think About It (Issues)” came next, with two requests from the band: Don’t vote for Trump, and stop shooting each other, since that is how they would do it in their country. “1353” was the very end to the epic set, which finished out with Nigel and each of the band members giving explosive recorder solos and heroic dance moves. There was no confusion as to whether the grand finale had occurred, yet it was clear that the crowd was not ready to let go.

Go here to see our full gallery from the event.