We got to talking with Denver’s fantastic and funky Kim Dawson about all things Music. If you’ve spent enough time at downtown music venues over the past several years, then chances are you’ve seen this groovy diva perform with the likes of Kyle Hollingsworth, Big Gigantic, The Motet; and the list goes on. Lucky for us, she made time in her busy schedule, taking a quick break from creating and performing, to indulge us in a little Q&A.
For years I’ve spotted Kim upon stages scattered throughout the Front Range, and every time it was like, “Damn, the pipes on that girl.” Well, she’s back at it again, and this time with the Pimps Of Joytime. The “Pimps” will be kicking off the evening’s festivities on July 14th at Red Rocks, preceding headliners Boombox and Galactic. So, we wanted to get inside Kim’s head prior to the event to see what she had to say about the big day. 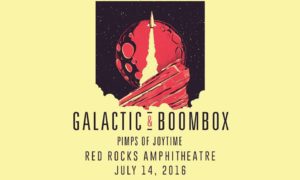 303 Magazine: I know the band is “losing their Red Rocks virginity” next month, but have you personally performed Red Rocks before?

Kim: It was briefly last September.  My homies make up the band Big Gigantic, and the band that I sang with for a long time, The Motet, were doing some tunes with them, the live band with the electronic kind-of thing, and they asked me to sit in on this tune and sing some vocals.  So, technically I’ve sung there but this will be my first set.  So, I’m pretty excited about that.

How long have you been an official member of the Pimps Of Joytime?

How did the relationship form with the band?

The drummer I’ve known for a long time.  He used to play with Karl Denson’s Tiny Universe, and I’ve worked with him quite a bit in that capacity.  So, he and I know knew each other before either of us were in the band, actually.  The rest of the band I met on Jam Cruise some years ago when The Motet was doing “Funk Is Dead.”  I was on the boat with The Motet and I met the Pimps Of Joytime and we kind of kept in touch, and I ended up doing a gig in Boulder with Brian J, the leader of the band, and Kyle Hollingsworth, a kind of funk-jam thing.  We run in the same circles, we see each other at festivals, and whenever they’d come into town I’d go see them and hang out.  So, we formed a pretty good relationship.  It’s not hard to get to know the band.  There was a mutual respect as far as musicianship goes, and so when they had an opening they called me, and I was really honored and jumped at the chance because I love what the band does. So, now I get to be a part of it all the time!

Are the Pimps Of Joytime your only project right now?

Every once in a while I’ll sing with the Kyle Hollingsworth Band, I just did a cruise with them recently.  I still do freelance stuff, as we all do, but my main thing is Pimps Of Joytime.  That is my one commitment.

What are yours and the band’s feelings about opening for Galactic and Boombox?

You know, getting to play at Red Rocks in any capacity is pretty awesome, so we are definitely very excited.  As far as it’s concerned with opening for Galactic – they’re an amazing band who I have a lot of respect for, Stanton Moore and Robert Mercurio and those guys are just monster players, and being on a bill with them is just really exciting.  We have a lot of admiration for the music that they bring.  Boombox, I don’t know as well but it’s going to be a really interesting and eclectic kind of bill.  The New Orleans funk element with Galactic and the electronic element with Boombox; we kind of happen to incorporate all of that stuff in our sound, so it’ll be really fun.

Do you have anything particular special planned for the big night?

It could be that our band leaders are cooking up something to surprise us with, that we’ll come surprise you guys with.  Regardless, we ‘re gonna bring the dance party and the energy.  This is fun music. We like to connect with people through music and that’s what we bring every single time.  We bring ourselves, we bring our love, our energy and our good spirits.  Hopefully, new people and new fans will see that and want more of it.  This is just an amazing opportunity and we are so excited about it.