What: Rhein Haus offers bocce, wurst, and a biergarten downtown

Located in the former space of Old Chicago on 14th and Market streets, two levels of bocce courts, bars and shared tables fill this mammoth ode to the German beer hall. Despite its size the space is warm and inviting. Dark, polished wood covers every space for a very authentic feel. A majority of the fixtures have been reclaimed from a variety of German and Austrian vestiges. The added pieces meld seamlessly with the interior and appear as if they have been in the restaurant for decades. 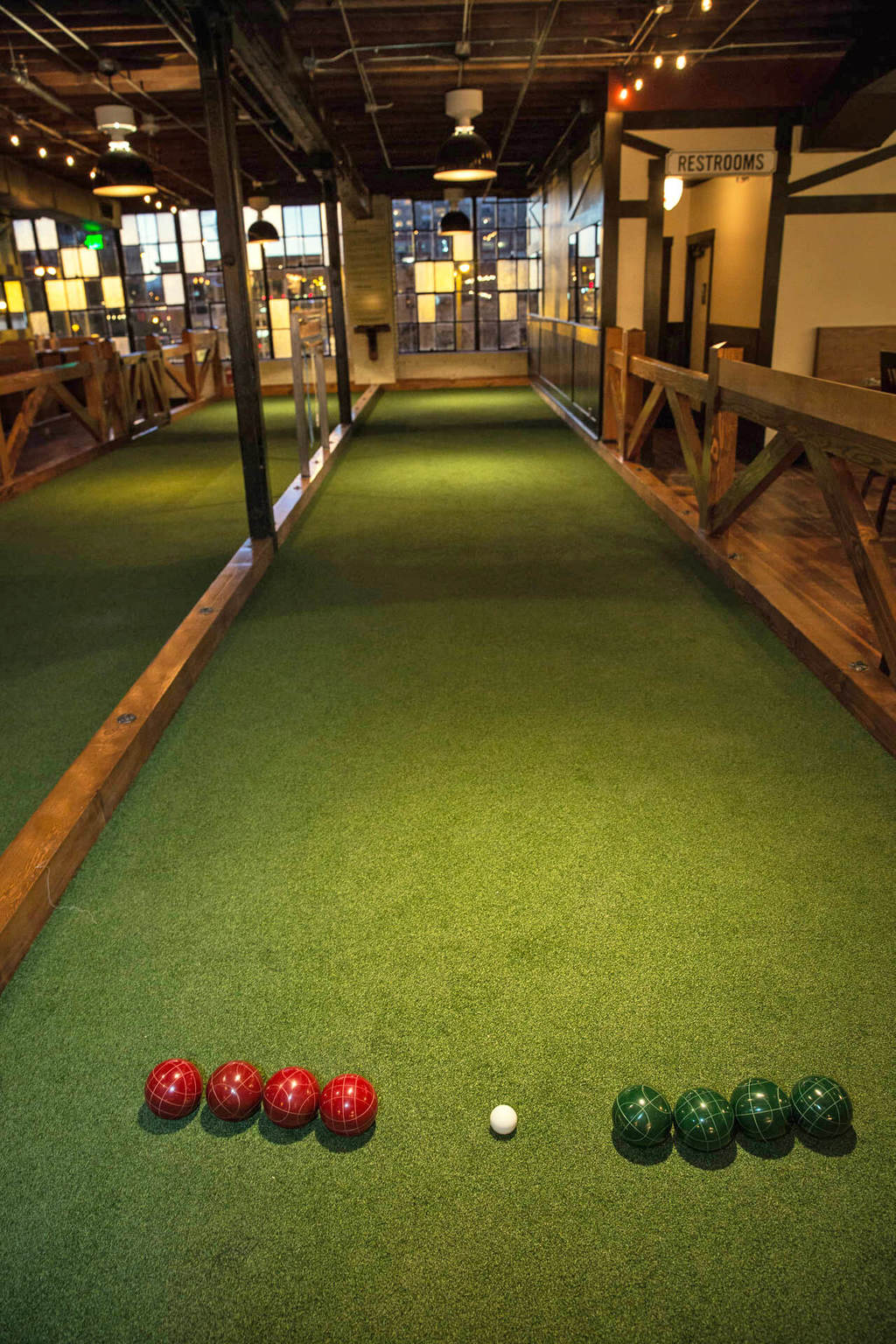 One of the four indoor bocce courts.

Three separate bars offer their own distinct feels, two smaller ones downstairs and one upstairs.

Although authenticity is clearly an ongoing current within Rhein Haus, don’t expect Oom-pah bands or old men dressed in lederhosen playing brass instruments. The restaurant pays homage to the great German beer halls, but still remains relevant to modern gathering places. Coming from Seattle it’s no surprise the music will be more modern-focused, and the playlists have actually been specially designed for the restaurant by iconic alternative rock radio station KEXP. 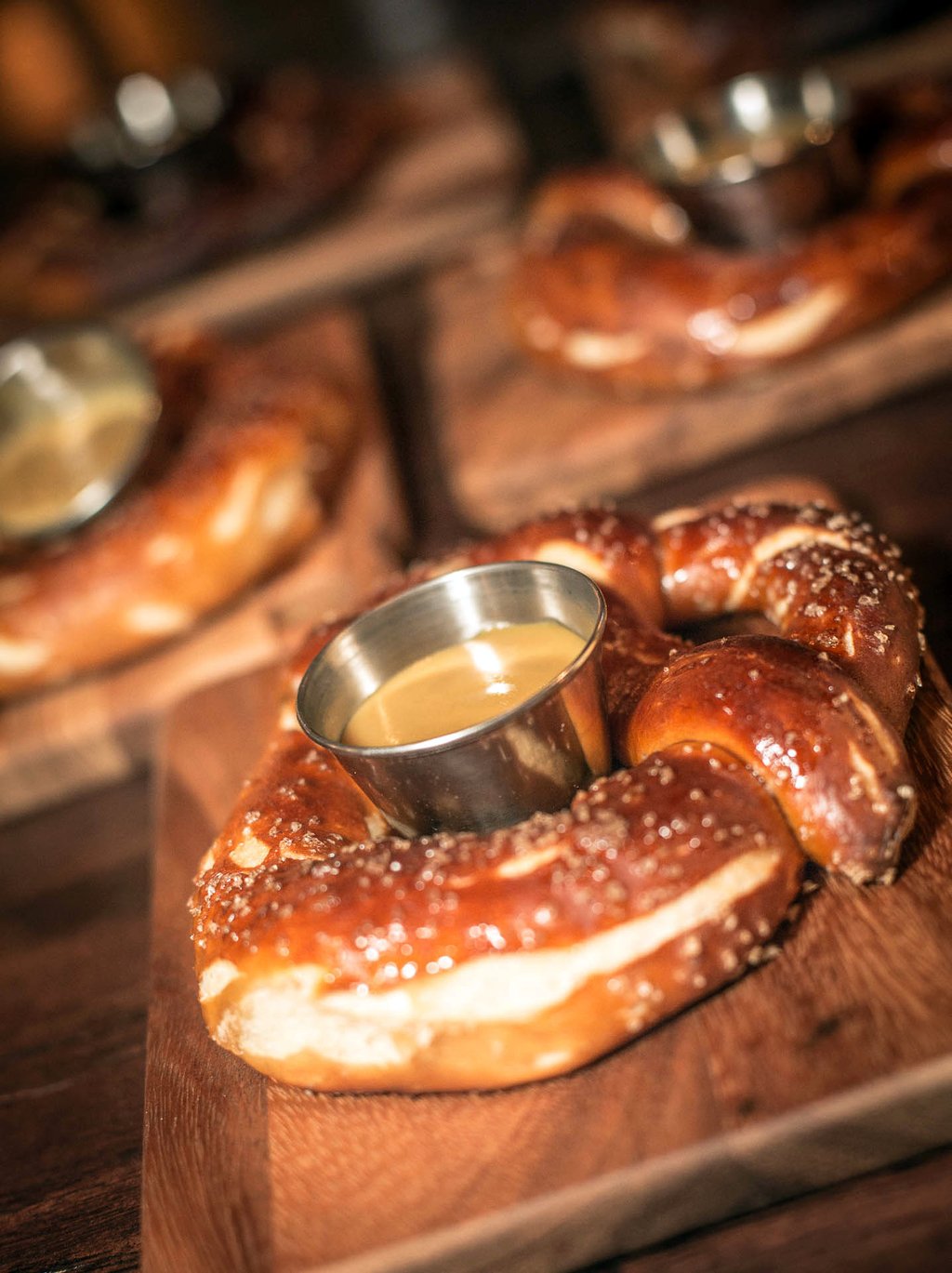 In-house made pretzels with cheese fondue.

Wursts (German sausages and cold cuts) may be on the moniker, but are by no means the only option. All of the accoutrements you’d expect at a German restaurant are on the menu, from sauerkraut to schnitzel, and pretzels to potato salad.  All sausages and breads are made from scratch in-house daily, and sourced from Northwest purveyors.  I’d suggest a wurst sandwich in order to experience both the perfectly-made pretzels and homemade wursts, along with sauerkraut and marinated peppers accompaniment.

A majority of the taps will feature classic German styles such as Kolsch, Weissbiers, and Bocks, but will rotate through both American and European-made versions. The rest of the taps will feature non-German styles including American IPAs, sours, and macros. The Highlands’ Prost Brewing Company will be brewing an exclusive Helles Lager available only at Rhein Haus. To supplement any style gaps on the tap list thirty additional beers will be available in bottles.

With one of the focal points of the restaurant being German beer, the staff have been trained on traditional styles both in-house and through some beer 101 training at Prost. A large space requires a lot of employees though, so hopefully the beer education and training will continue.

For $3, patrons can order the classic German digestif Underberg, made famous by its list of ingredients from 43 countries and mini bottle,  straw paper-wrapped packaging. Compared to its more infamous and bitter cousin Jägermeister, Underberg is much less syrupy, and offers a palate-cleansing finish to a heavy meal. The spicing is much more prominent, and rather than being heavily anise-flavored, leans a bit more towards the numbing qualities of nutmeg.

A modern restaurant with Old-World feel, Rhein Haus offers something for everyone without sacrificing authenticity. The bocce courts and sheer size should be great for groups, but the three distinct bars offer a respite for smaller parties or even the solo German food and beer enthusiast.