An average of 75,000 fans enter the gates of Sports Authority field for a Denver Broncos home game.

As females, we want to stand out but still look sporty at the same time. Clothing options for Broncos Babes are often limited. Sick of sporting an oversized men’s jersey and jeans on game day?

Here are 5 unique feminine outfits you can rock to support the Denver Broncos this season.

Made famous by former Broncos Hall of Fame player, Terrell Davis, the Mile High Salute refers to a player or member of the crowd saluting a good play or an outstanding member of Broncos country. Transfer it into your wardrobe with this outfit.

The official ‘Salute to Service’ game is not until late November but supporting the troops never goes out of style. Add some cameo accessories to your usual game day garb for true Mile High salute style. 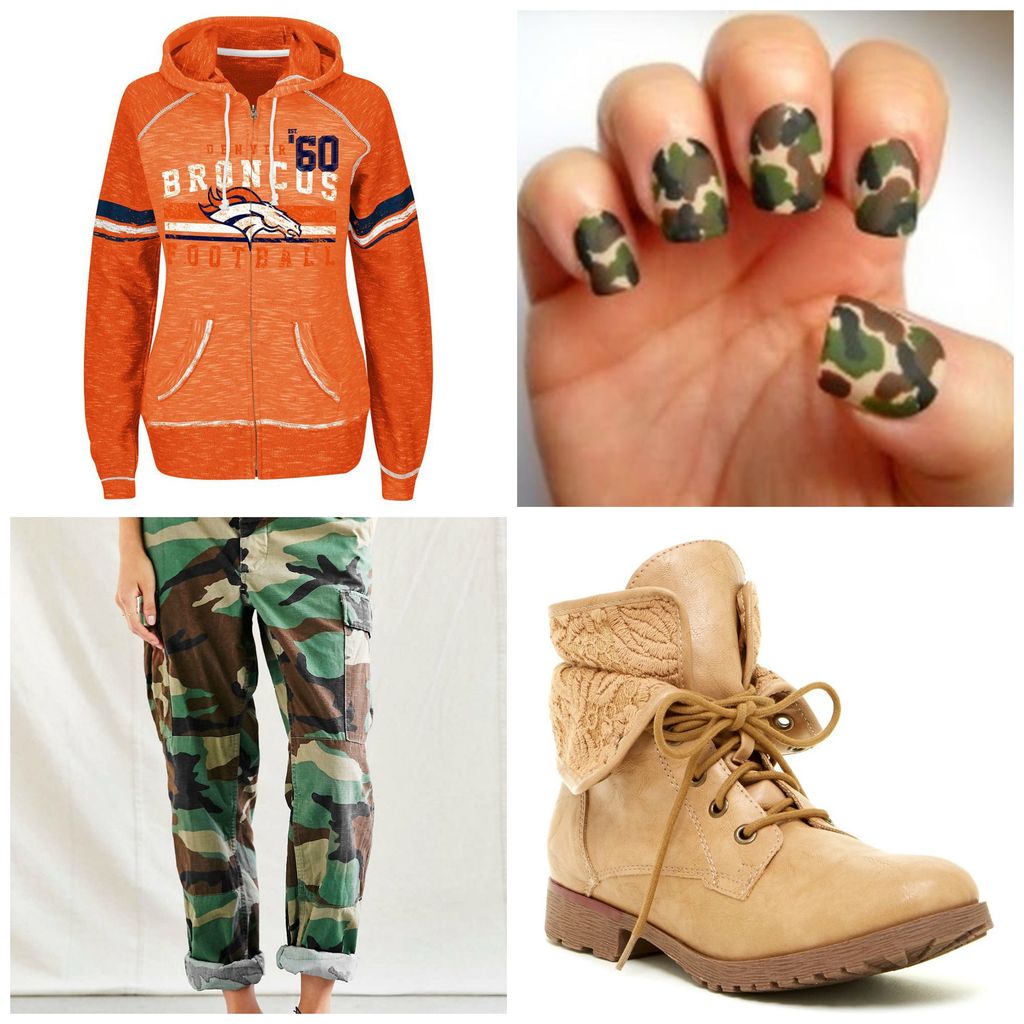 #TimeToRide is not just a hashtag you are supposed to use on that Instagram game-day selfie. Go literal with your look and  you will be ready to hop on Thunder and ride across Sports Authority Field.

Get the look: pair your favorite player’s jersey with a long sleeve flannel and denim on bottom. For more of a country flare add a cowgirl hat, cowgirl boots or a studded belt. 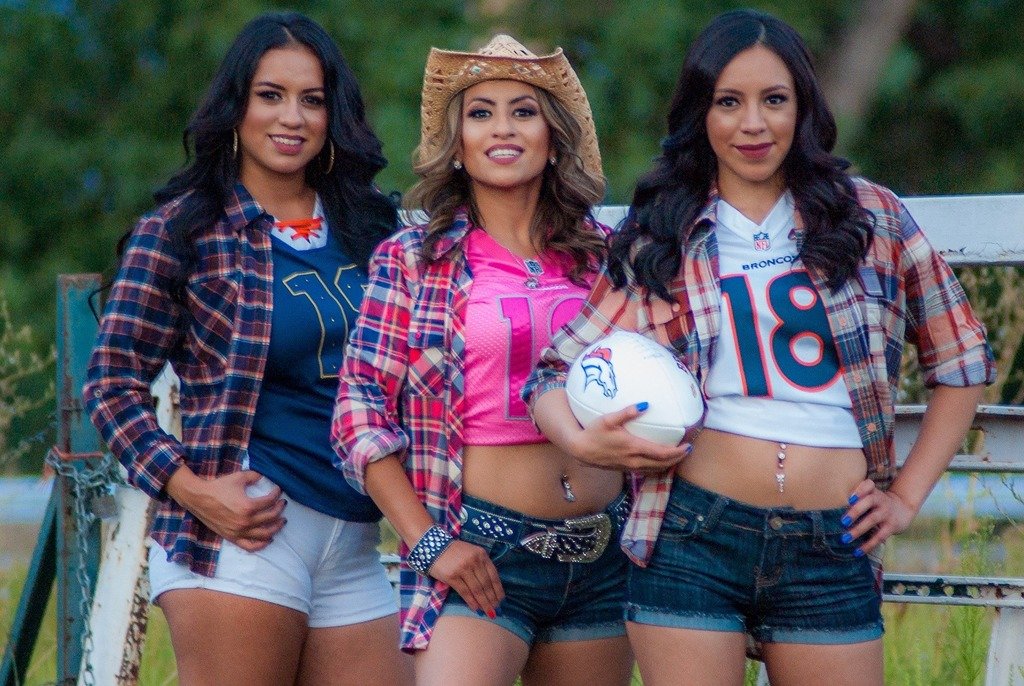 Nothing makes a statement more than an attention grabbing shirt like this one. Locally-based companies like Fanbuild make shirts as hilarious as Oakland’s attempt to win games. Pair a graphic tee with white jeans and orange shoes to be the hottest “Broncette” at the tailgate. 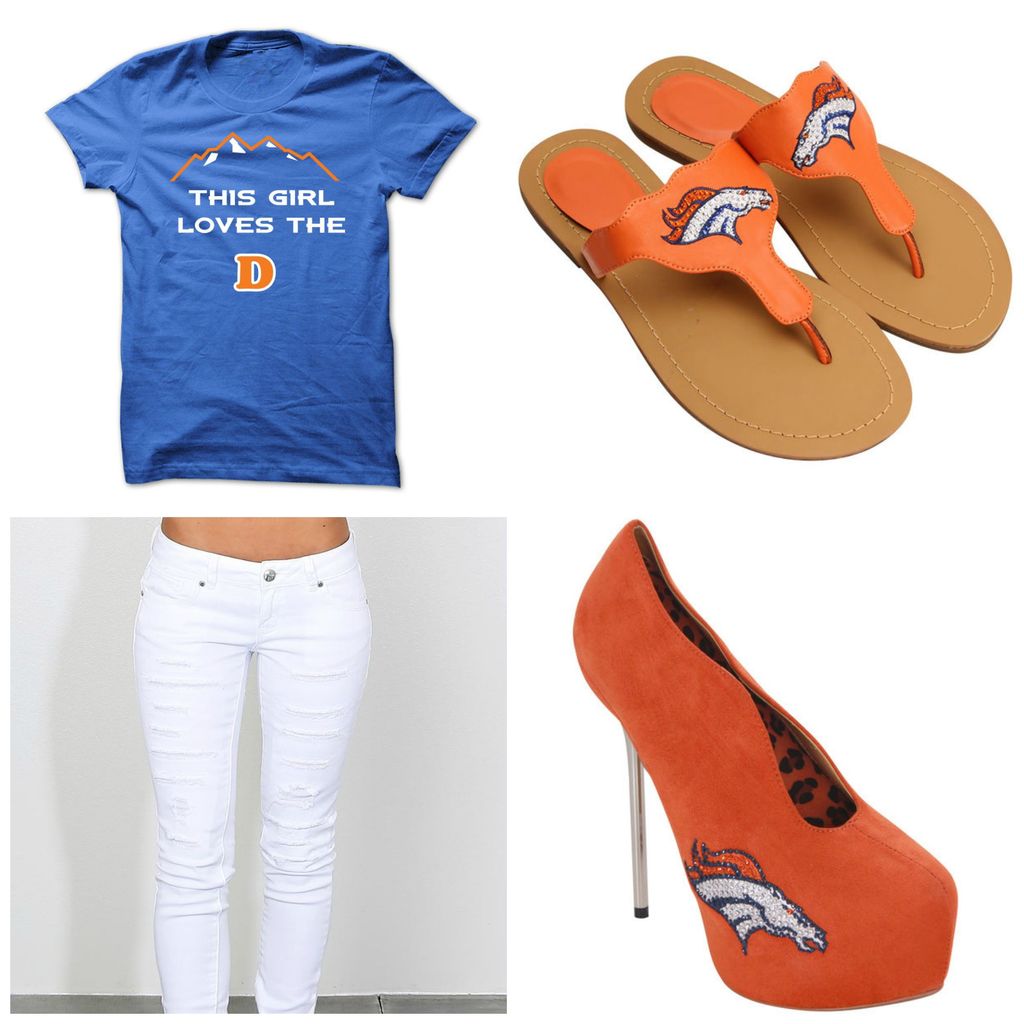 As the Broncos offense gets hotter throughout the season, the outdoor temperatures begin to get cooler. It can be a challenge to still find something to wear to look Broncos-chic when all you want to do is layer 900 coats on yourself. If you’re going to an outdoor game in sub-zero temps do not sacrifice warmth for fashion. For those brave enough to head outdoors for the December games, here are a few looks you can steal to still look cute without looking like a giant orange marshmallow. 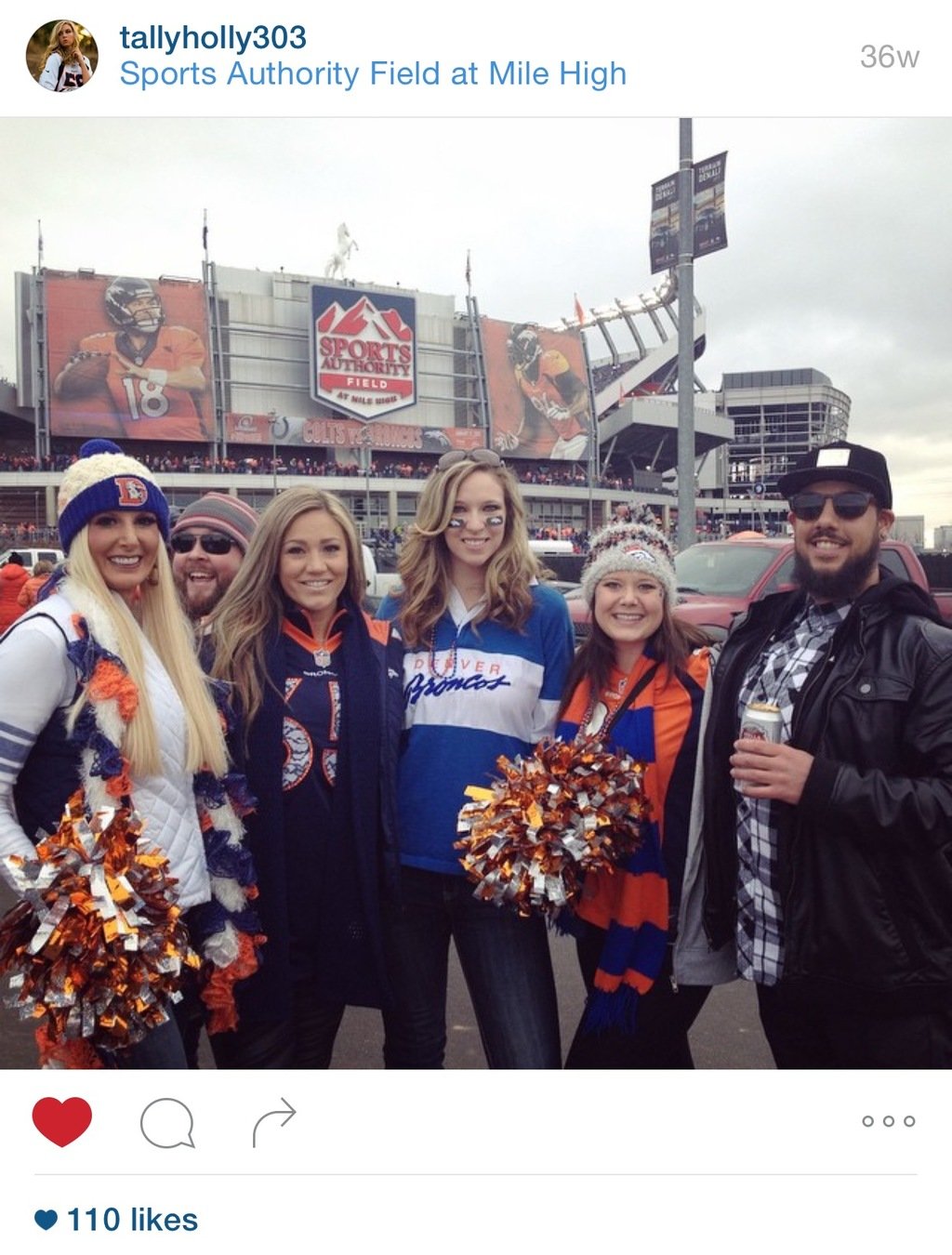 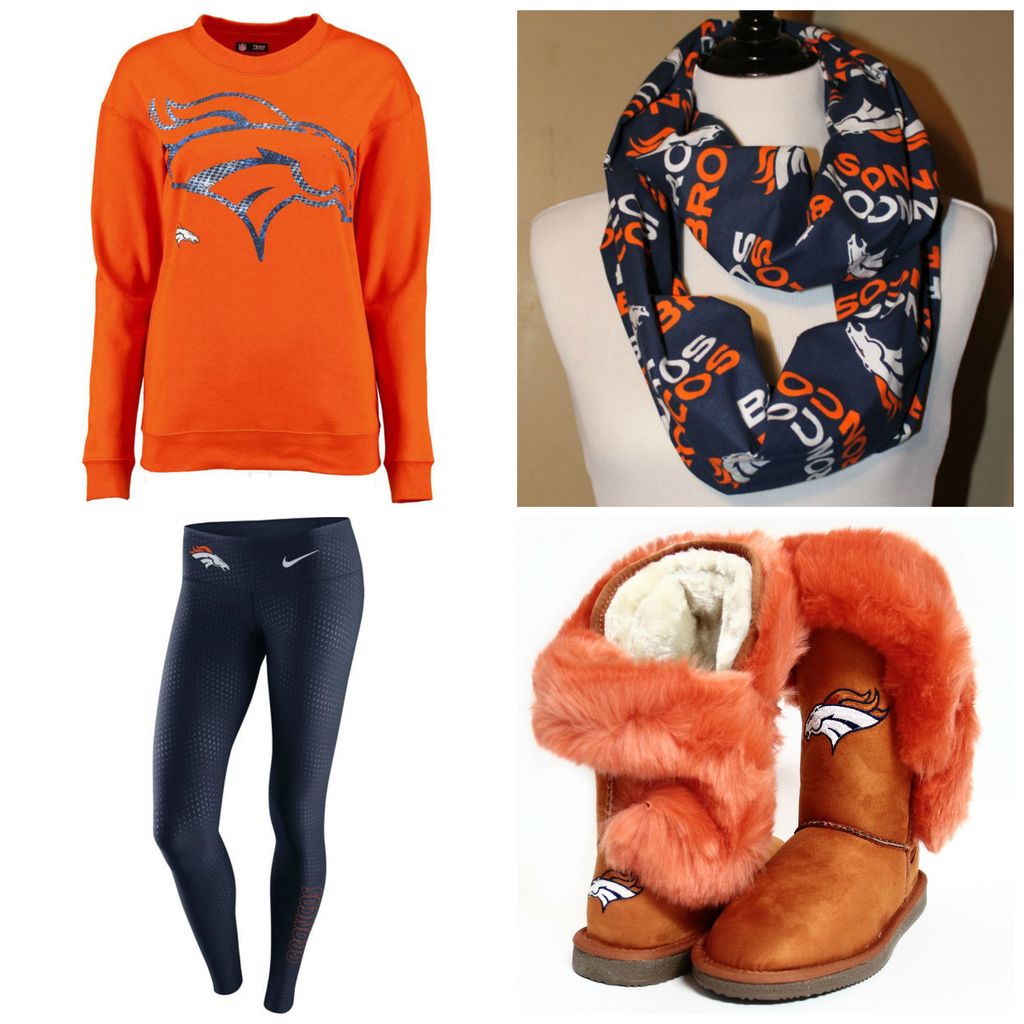 “I love these pants but have the hardest time pairing them with anything.” -Katherine Schwappach, Denver 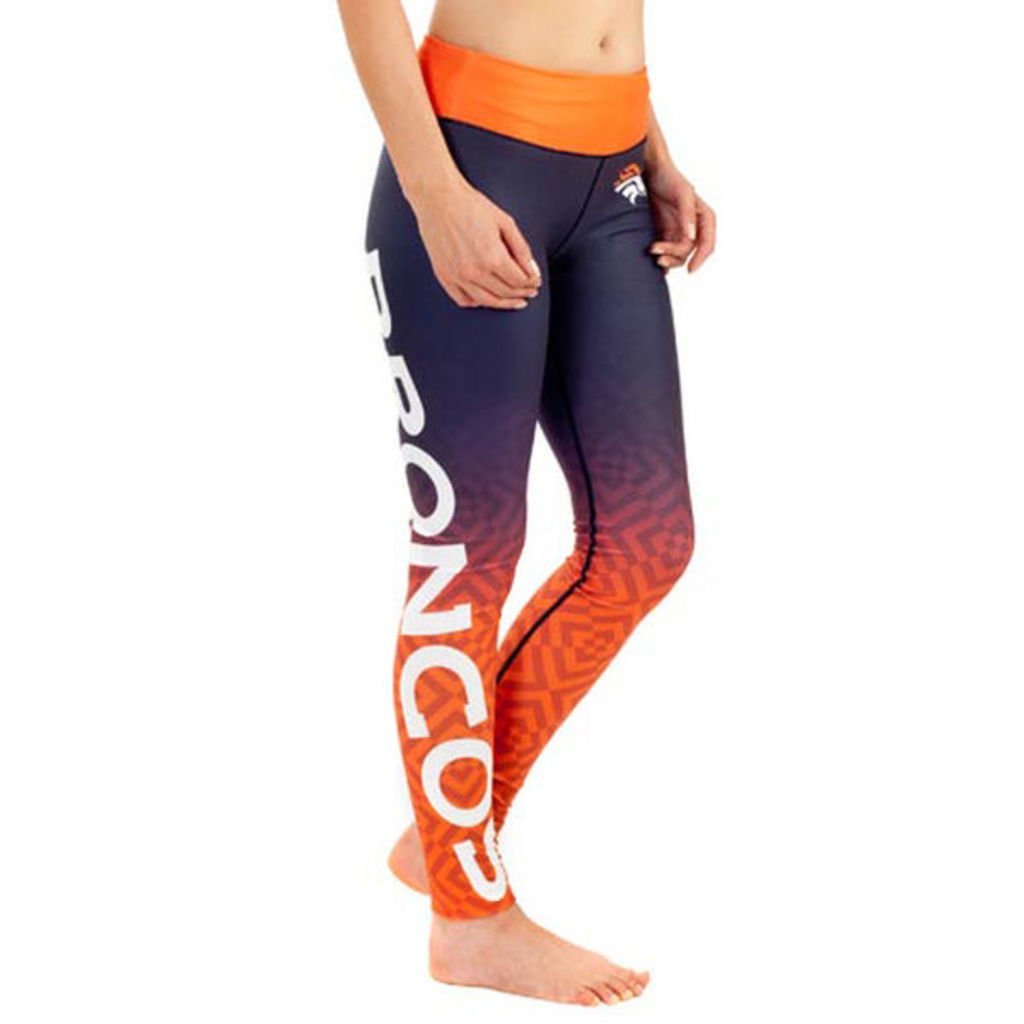 Fear not Katharine – pairing hot attention grabbing pieces can be a challenge. As a rule of thumb, always pair a statement piece with a plain-colored piece. Continue the trend with these athletic bottoms with a casual fitting top…which leads us to #5: 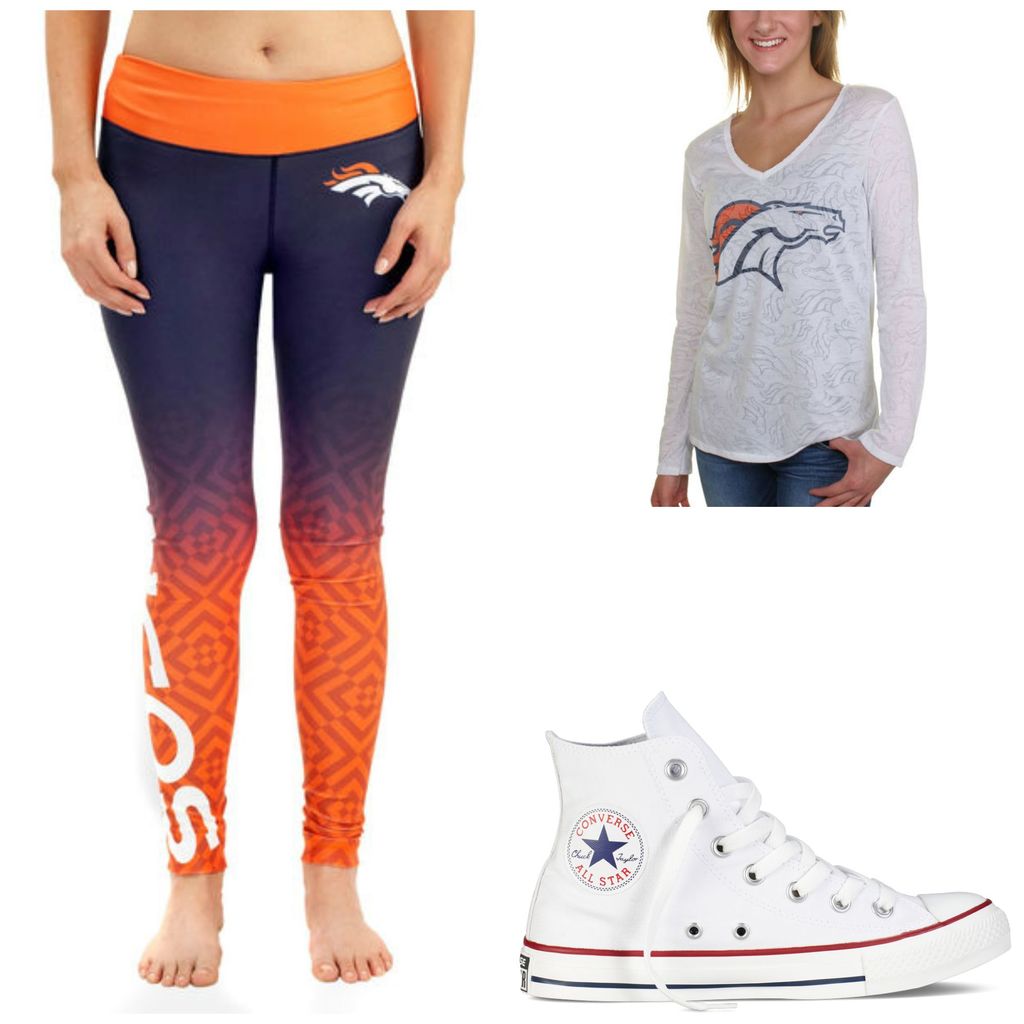 Pants and top from NFL Shop, shoes from Converse.

Tip From a Diehard Fan

“Whether they are store bought or home made, I think Broncos accessories are a girl’s best friend. My beaded bracelet [pictured below] was given to me by a woman who I gave a T-shirt to at a game. She was really hot in a long sleeve and I had a Broncos bikini on under my jersey, so we traded. She was so grateful that she gave me that bracelet that her grandma made. I love it and wear it all the time.” -Ayla Webb, Hawaii 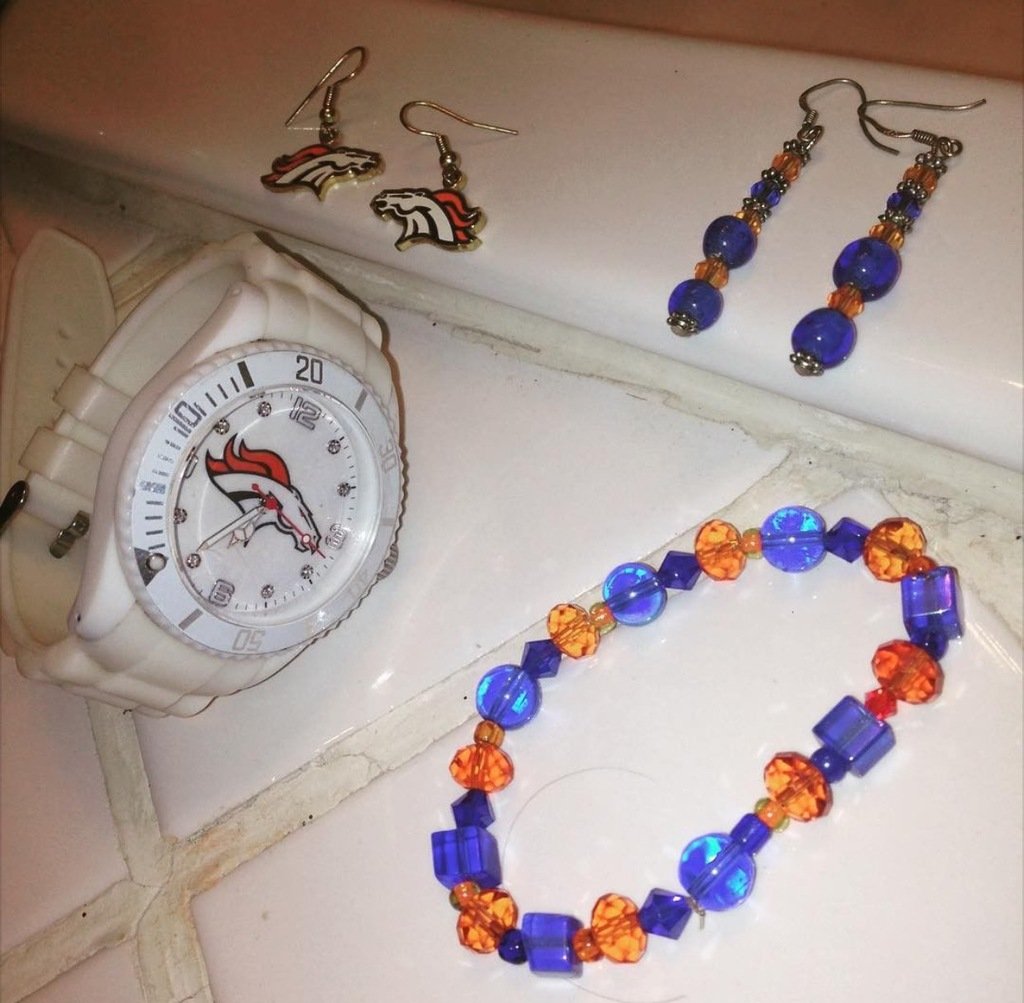 Ayla, we could not agree more! The Broncos have another 14 regular season games. If you try to buy something for every United in Orange Friday at the office you will go broke—buy a few unique pieces and mix and match them all season.

Check out some of our favorite accessories and looks below.

Makeup looks found on Google, hats from My Timeless Impression, nails from 29 Secrets, bow from Etsy.

Now that you have an entire new playbook of unique Broncos outfits, the only thing that is left to do is study up and dress to impress on game day. Go Broncos!